Thank you for following the Real Madrid vs Barcelona LaLiga matchday 30 broadcast.
3:54 PMa month ago

Real Madrid swept the series against Barcelona and momentarily took the lead by beating Barcelona.
3:54 PMa month ago

Moribar with a shot against the crossbar.
3:52 PMa month ago

Braitwaite's header at the near post goes wide.
3:51 PMa month ago

Moribar with a medium distance shot over the top.
3:50 PMa month ago

Messi's free kick goes over the wall but is saved by Courtois.
3:49 PMa month ago

Double yellow for Casemiro and he is sent off.
3:48 PMa month ago

Casemiro is cautioned for bringing down Messi.
3:43 PMa month ago

Alba is cautioned after a claim for a penalty on Braiwhite.
3:41 PMa month ago

Isco's shot from half distance goes over the top.
3:40 PMa month ago

Braitwhite and Trincao come in.

Marcelo's left-footed shot goes over the top.
3:34 PMa month ago

Dembélé's header into the goalkeeper's hands.
3:31 PMa month ago

Out: Benzema, Vinicius and Kroos.

In: Marcelo, Rodrygo, and Diaz.

Araujo came off and Moriba came on.

Nacho is cautioned.
3:23 PMa month ago

Messi's direct free kick is deflected into the wall.
3:23 PMa month ago

Busquets left and Roberto came on, a change for Barcelona.
3:22 PMa month ago

Griezmann is fouled and there will be a direct free kick.
3:21 PMa month ago

Vinicius' cross is deflected by Araujo and the ball hits the post.
3:19 PMa month ago

Alba's cross is finished off by Mingueza inside the box for 2-1.

Benzema's powerful shot goes over the top.
3:14 PMa month ago

Griezmann with a shot that goes wide, even though it was offside.
3:10 PMa month ago

They look for Benzema with a long throw that Ter Stegen rejects.
3:08 PMa month ago

Dembélé's cross that Courtois catches the ball in the air, when the rain has let up.
3:05 PMa month ago

Change in Barcelona. Dest is out and Griezmann is in.
3:04 PMa month ago

The second half begins.
2:53 PMa month ago 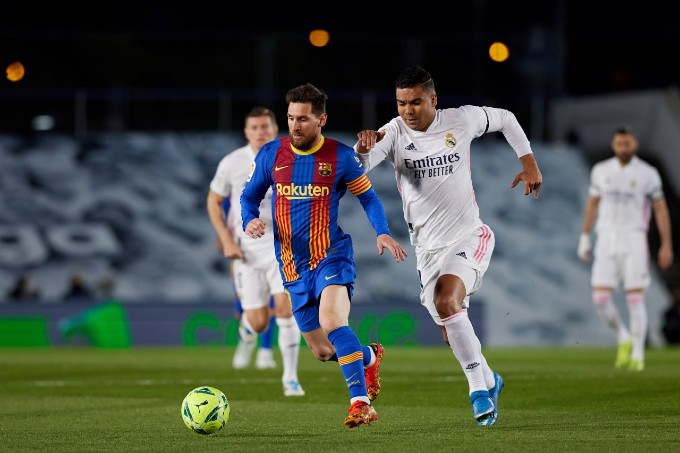 Messi's corner kick almost made it an Olympic goal when it hit the post.
2:46 PMa month ago

Lucas Vázquez can't take it anymore and will have to come on as a substitute.
2:42 PMa month ago

Casemiro ends up stealing the ball from Dembélé and then he ends up getting fouled.
2:39 PMa month ago

Hard clash between Vázquez and Busquets, where the Madrid player takes the worst part.
2:36 PMa month ago

Valverde's shot hit the post and on the counter Vázquez missed Ter Stegen.
2:34 PMa month ago

Barcelona dominates the ball, but lacks depth.
2:31 PMa month ago

Kroos' shot hits the goalkeeper's post and increases the difference.

Vinicius is fouled just outside the area and Araujo is cautioned.
2:26 PMa month ago 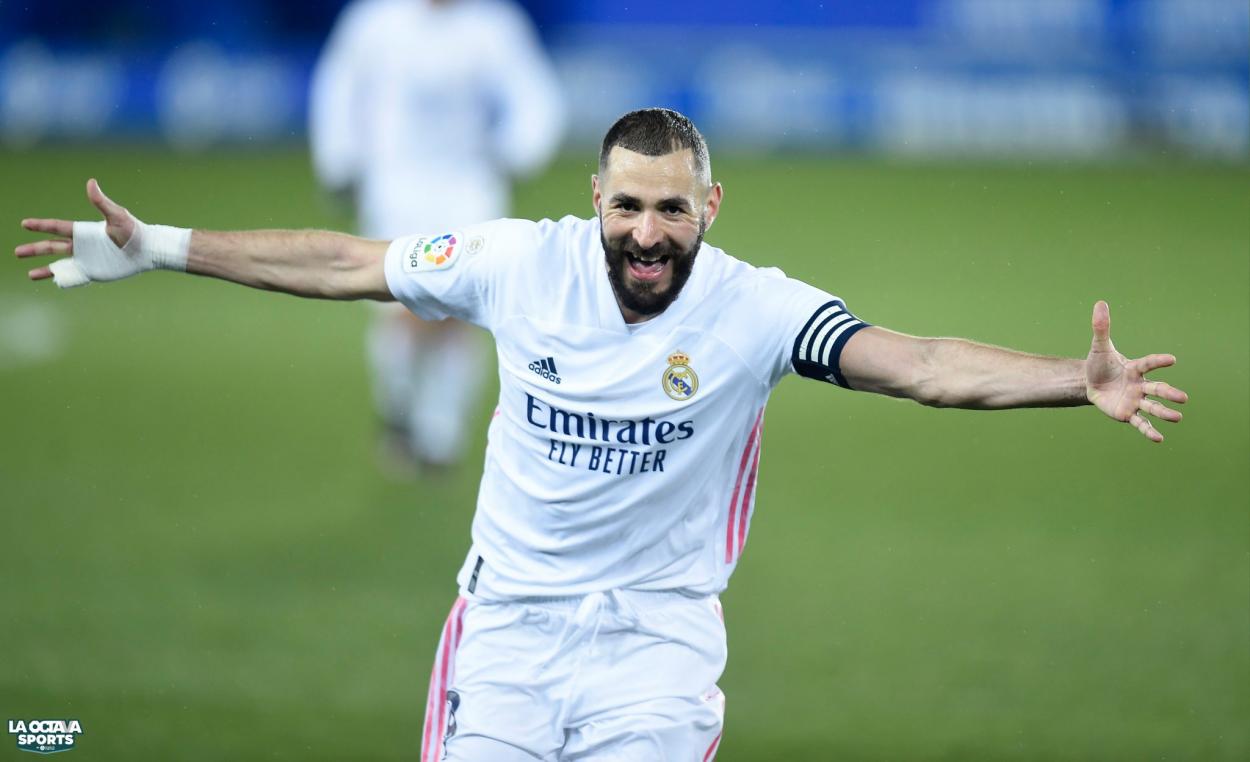 Pedri brings down Casemiro and Real Madrid will have a direct free kick.
2:21 PMa month ago

A foul was called on Lenglet in the area, but the referee awarded it to the Barcelona player.
2:17 PMa month ago

Benzema with a great back-heel to open the scoring 1-0.

Messi is brought down just outside the area but the referee does not award a penalty.
2:11 PMa month ago

Alba's cross inside the six-yard box is cleared by Courtois at the first danger.
2:08 PMa month ago

Valverde is penalized for a foul in Barcelona's half.
2:06 PMa month ago

Vinicius tries to break through but the ball goes wide.
2:05 PMa month ago

Ter Stegen was making a mistake at the start, but it didn't happen.
2:02 PMa month ago

The match between Real Madrid and Barcelona begins.
1:58 PMa month ago

The duel between Real Madrid and Barcelona is about to start, the teams are getting ready to take the field.
1:55 PMa month ago

This is how Barcelona's warm-up ended 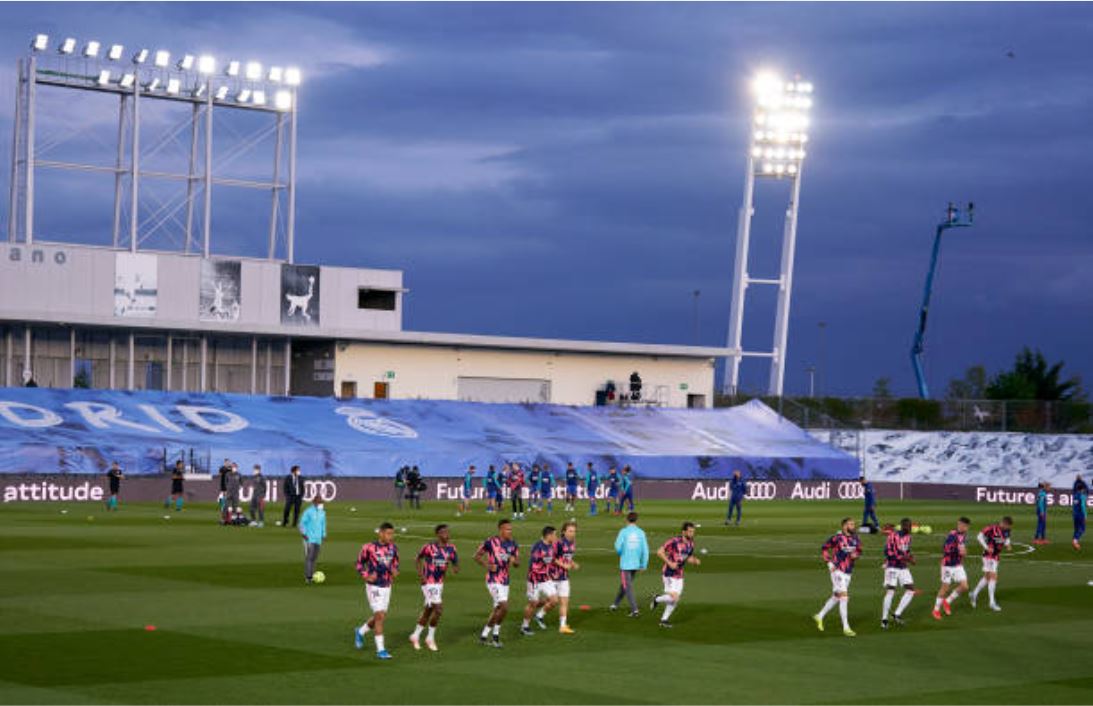 In case you missed Barcelona's lineup 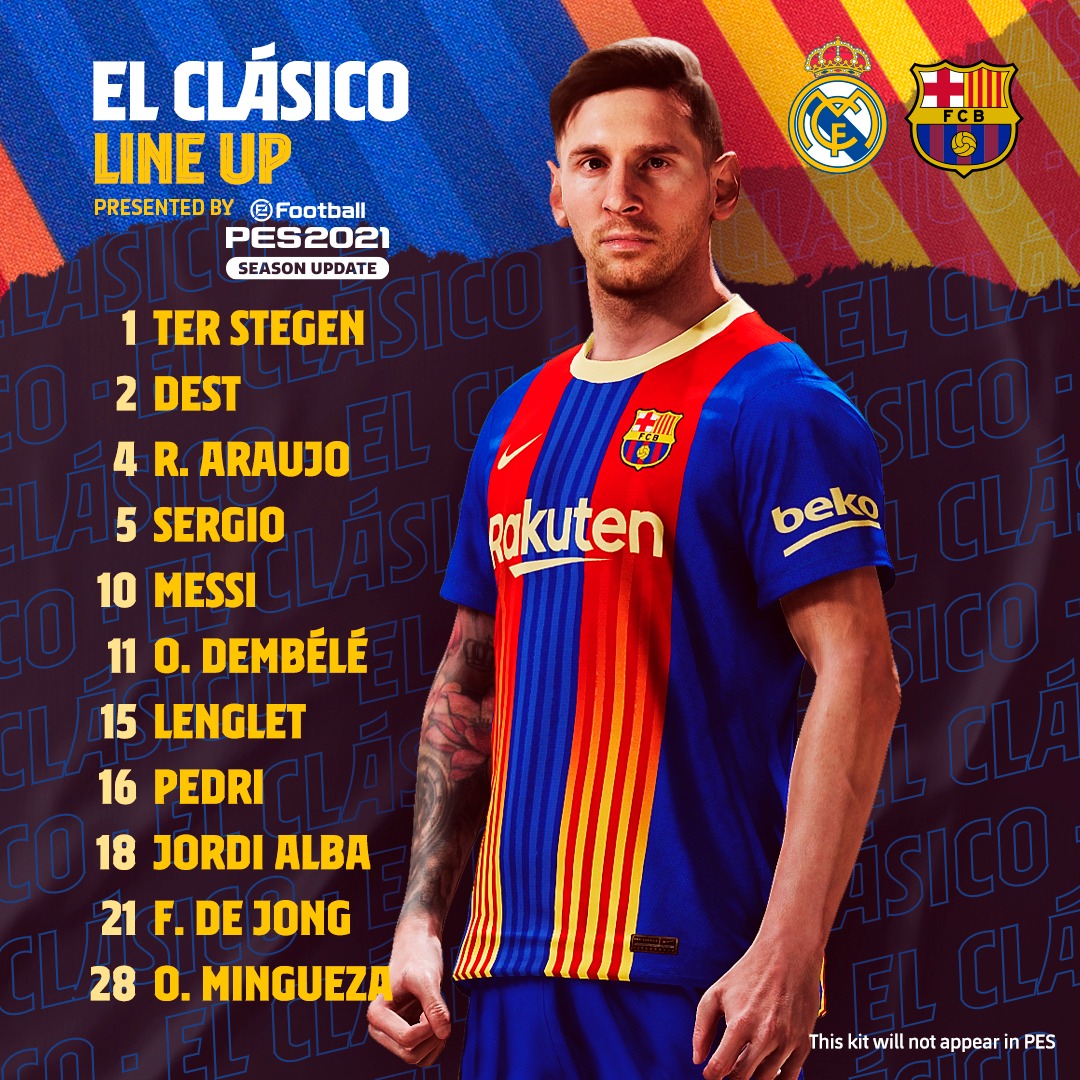 In case you missed Madrid's lineup 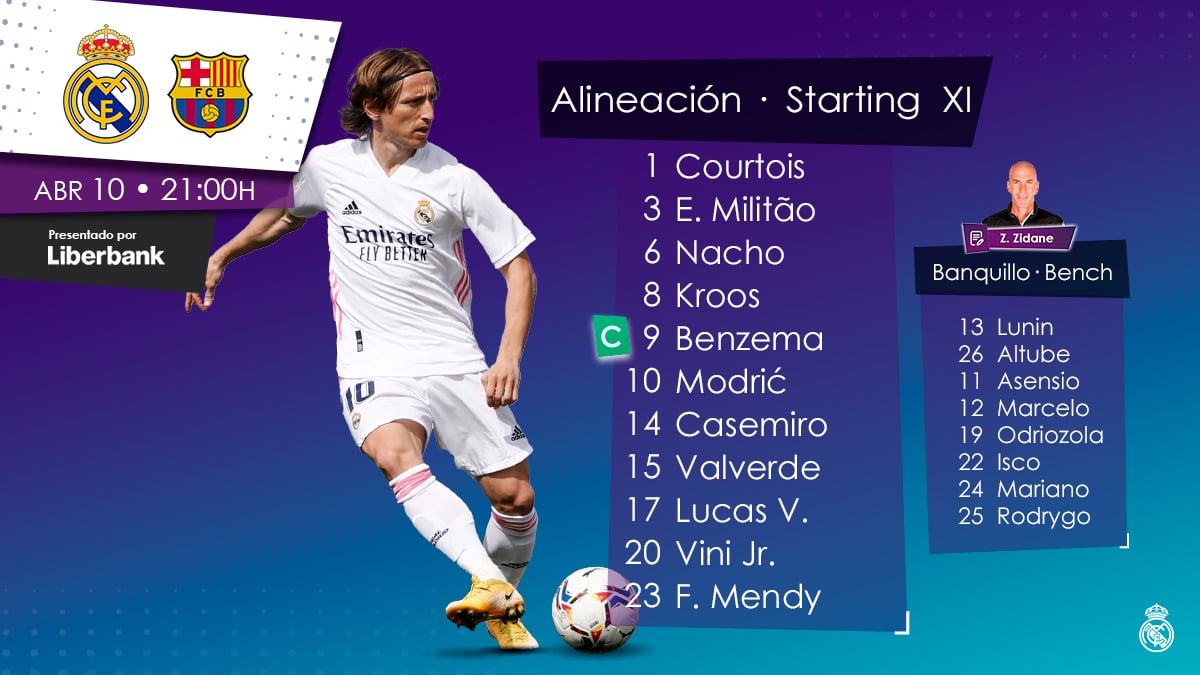 Messi relaxed next to his mate 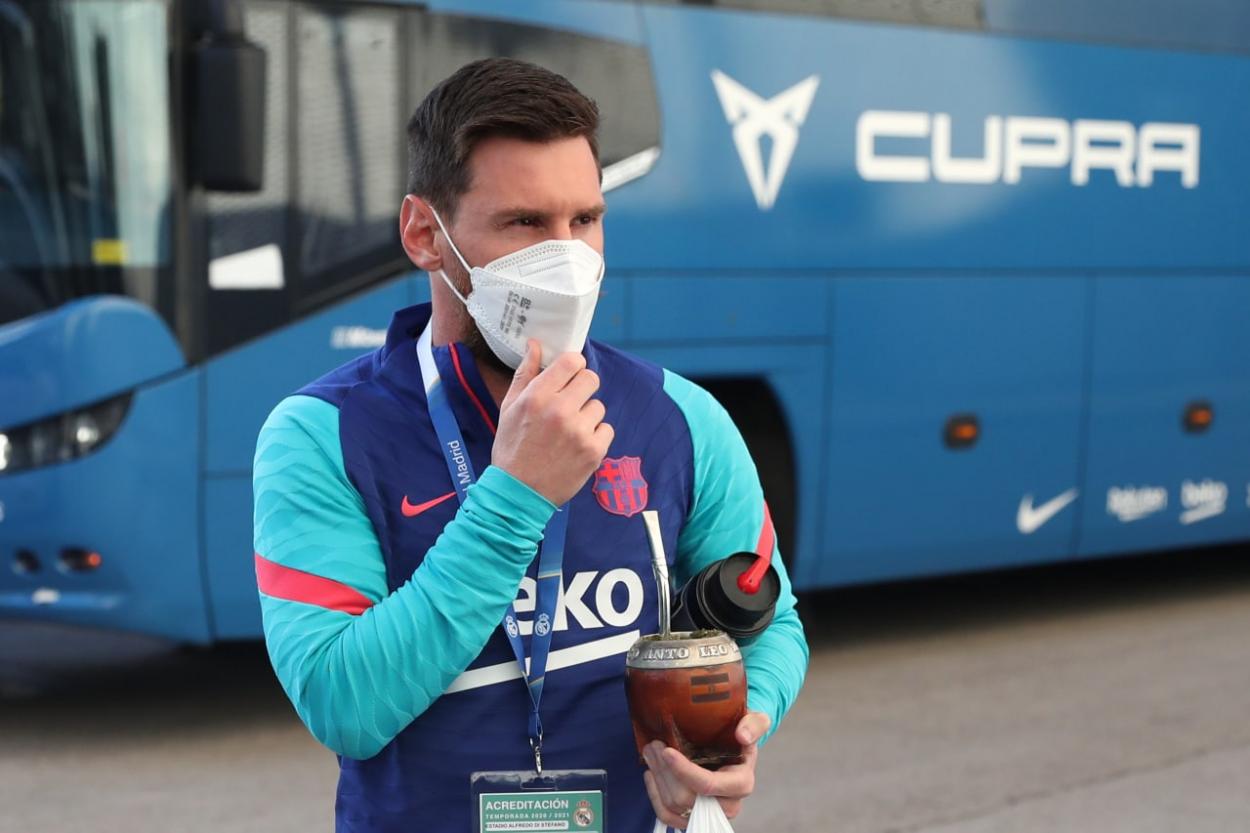 Barcelona is already warming up

Real MadridReal Madrid is in third place overall with 63 points and with a win would overtake Barcelona and would be waiting for Atletico to lose at home to Betis so that, with a good goal difference, they would assume the lead.
1:35 PMa month ago

Can Messi score this afternoon? 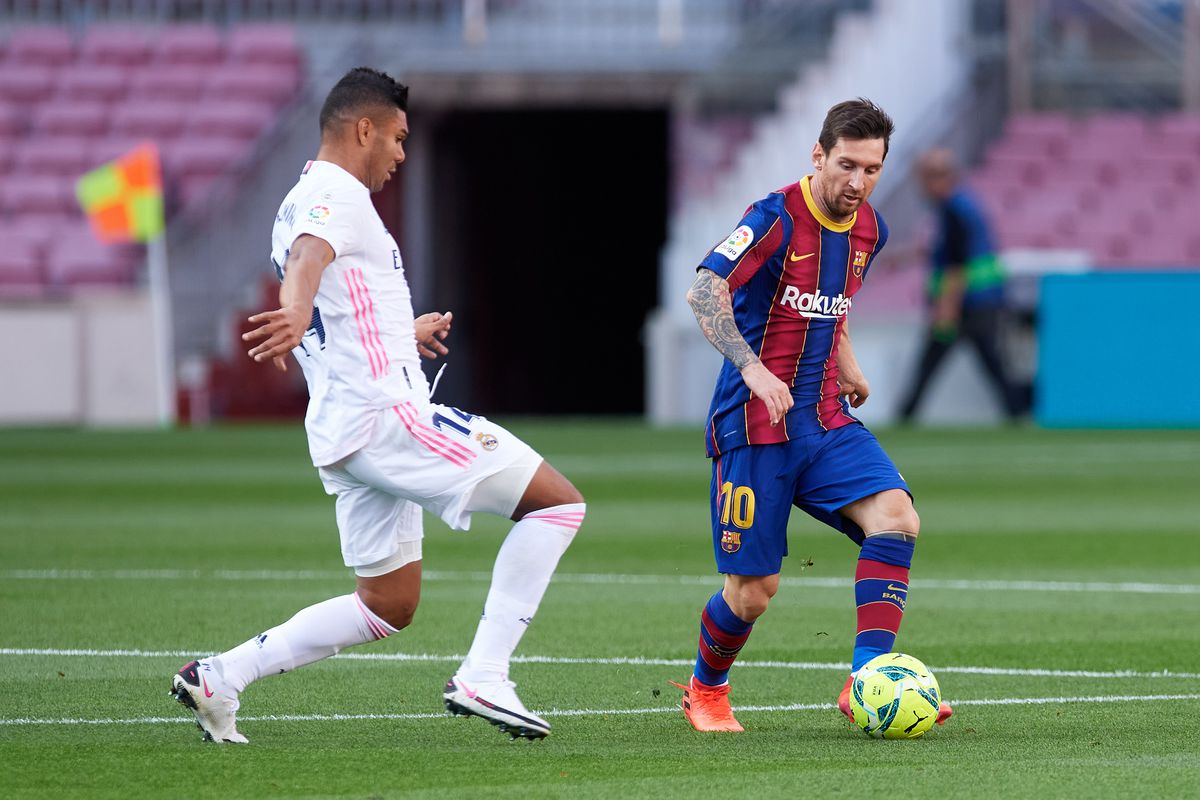 Despite being fit to start, Koeman opted to bench Pique, who has not played in recent weeks.
1:30 PMa month ago

With 65 points, a win today would catapult them to 68 points, awaiting a slip-up by Atlético de Madrid at Real Betis.
1:23 PMa month ago

Real Madrid has started to warm up

The Merengues are coming off the back of two home victories, a 2-0 win over Eibar in LaLiga and a 3-1 win over Liverpool in the Champions League.
1:21 PMa month ago

Barcelona struggled on Monday, but ended up beating Valladolid 1-0 to remain in the overall runner-up position.
1:17 PMa month ago

Every time Gil Manzano has whistled against Barcelona, the Catalan team has had a positive balance of 16 wins, six draws and five defeats.
1:16 PMa month ago

LaLiga had designated Mateu Lahoz as the central referee for this match, but due to a muscular injury he will not be able to attend and his replacement is Gil Manzano, who sent off Messi in the last final played by Barcelona.
1:15 PMa month ago

Night begins to fall in Madrid 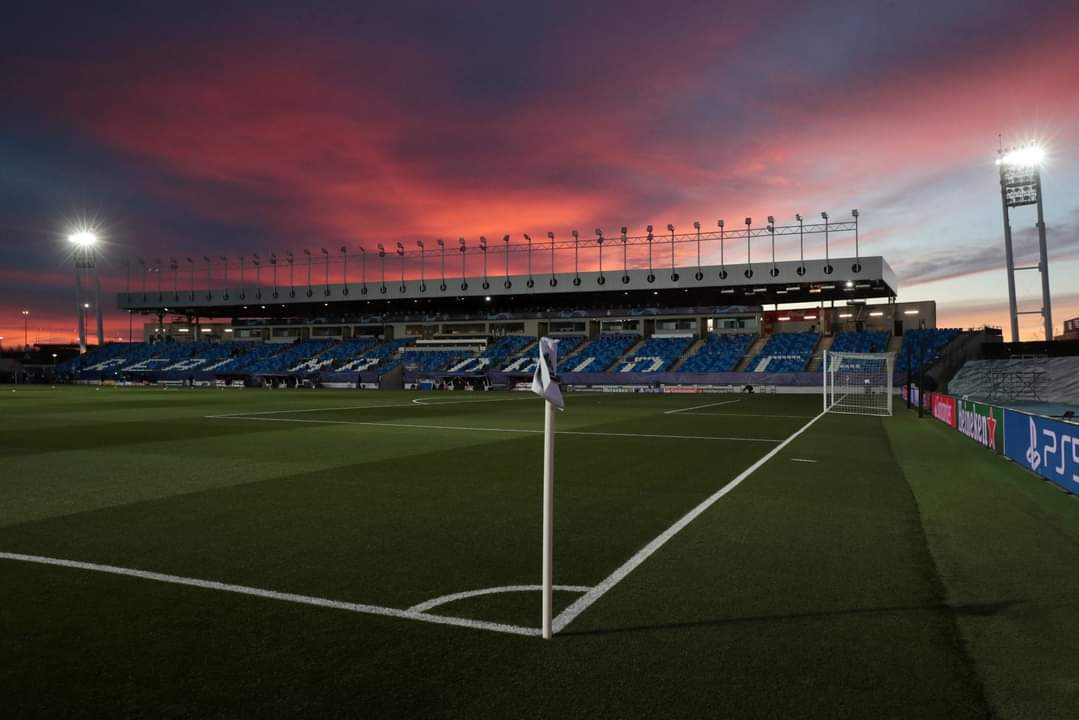 The last time these two teams met was in matchday 7, when Real Madrid won 3-1 away to Barcelona. 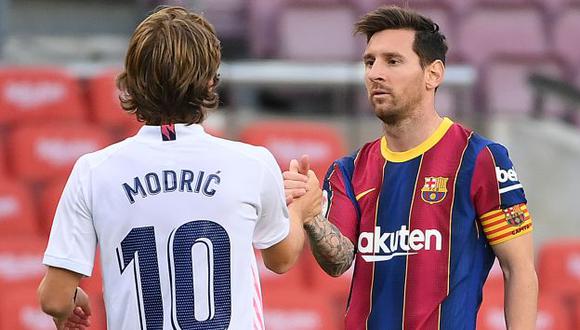 Goals have not fallen too much on this day as Cadiz beat Getafe 1-0 as visitors; Bilbao and Alaves did not hurt each other with a 0-0 draw and Levante in the 83rd minute is winning 1-0 against Eibar.
1:08 PMa month ago

Barcelona recalled some epic celebrations that have taken place at Real Madrid's home, will the occasion be repeated? 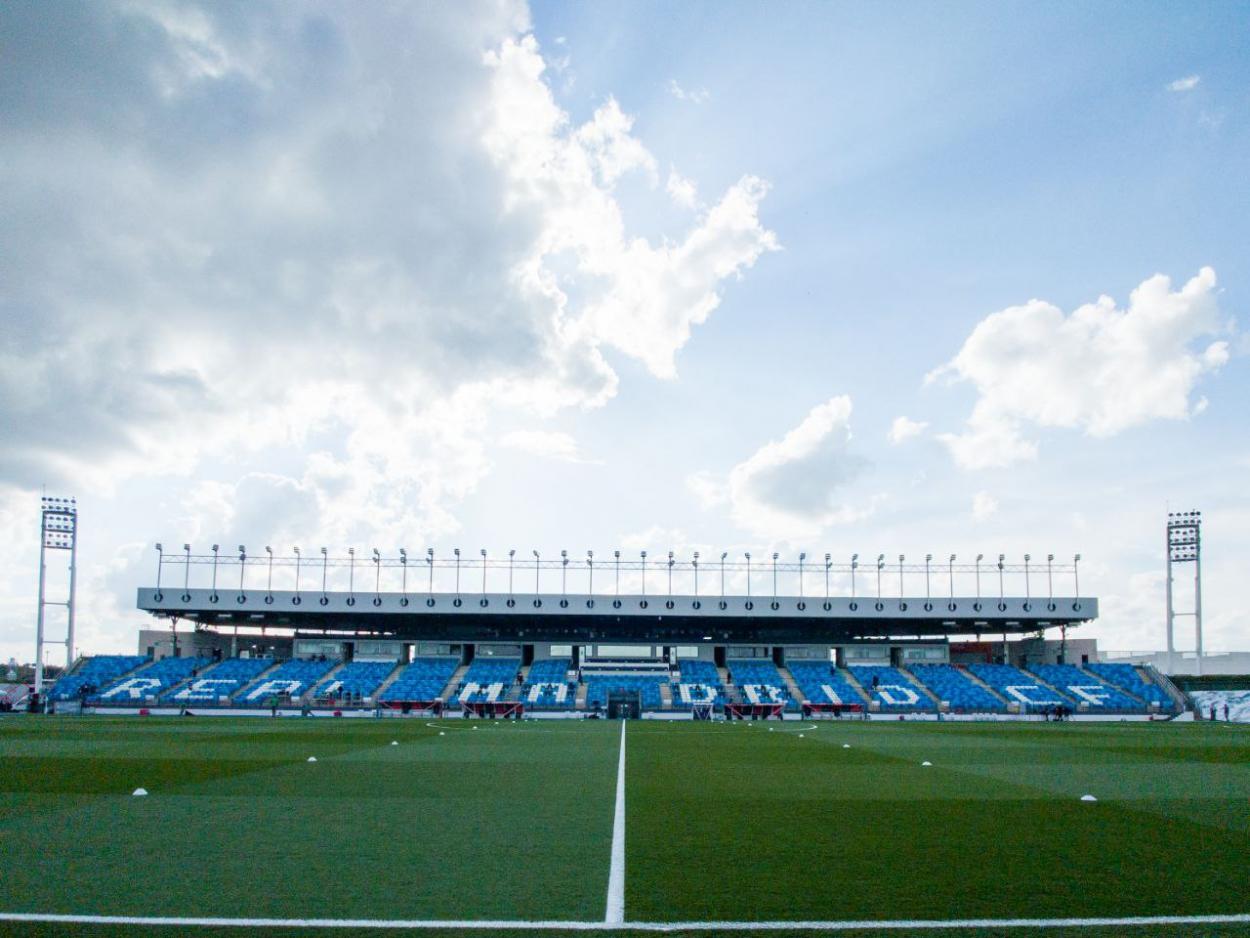 Madrid goes with the white one 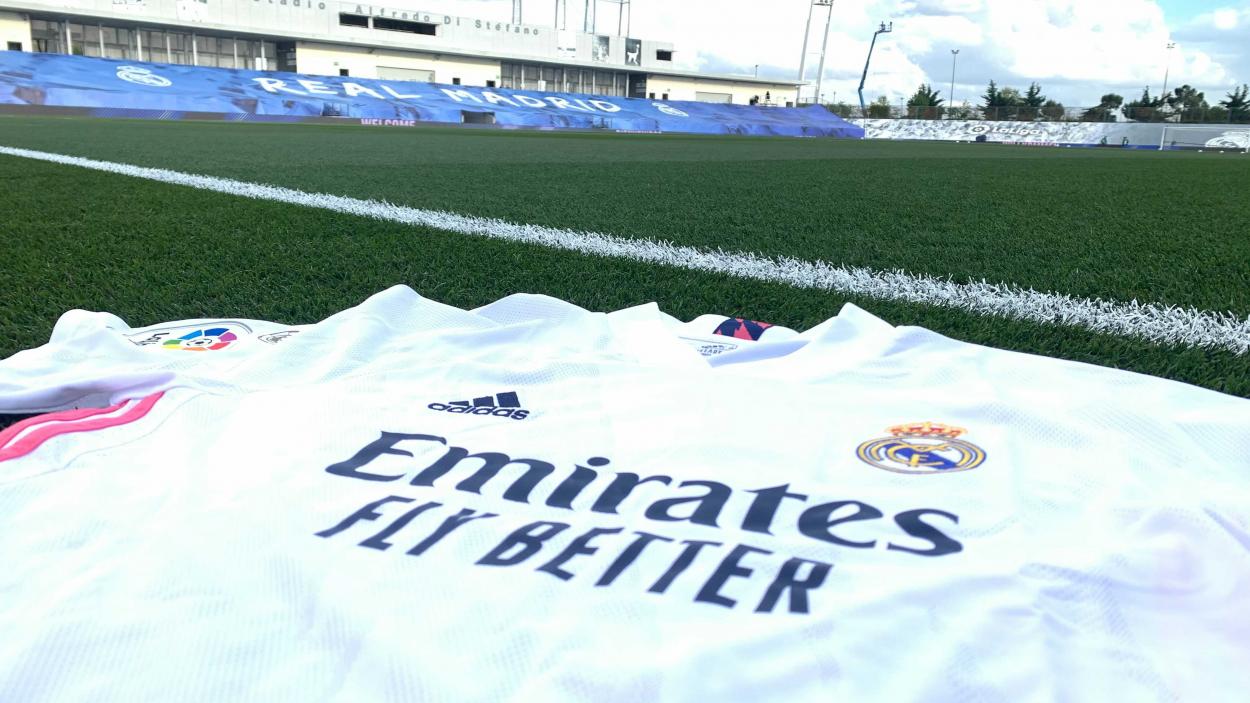 Real Madrid said it was ready

The game that paralyzes Spain and the whole world is just an hour away. We begin with coverage of Real Madrid vs Barcelona, in a key clash for the title.
5:15 AMa month ago

Tune in here for Real Madrid vs Barcelona Live

Do not miss a detail of the match with the live updates and commentaries of VAVEL. Follow along with us all the details, commentaries, analysis and lineups for this Real Madrid vs Barcelona match.
5:10 AMa month ago

In Madrid's last five home games, Barcelona has the advantage of three wins and two losses, although their most recent visit on March 1, 202 was a 2-0 defeat. 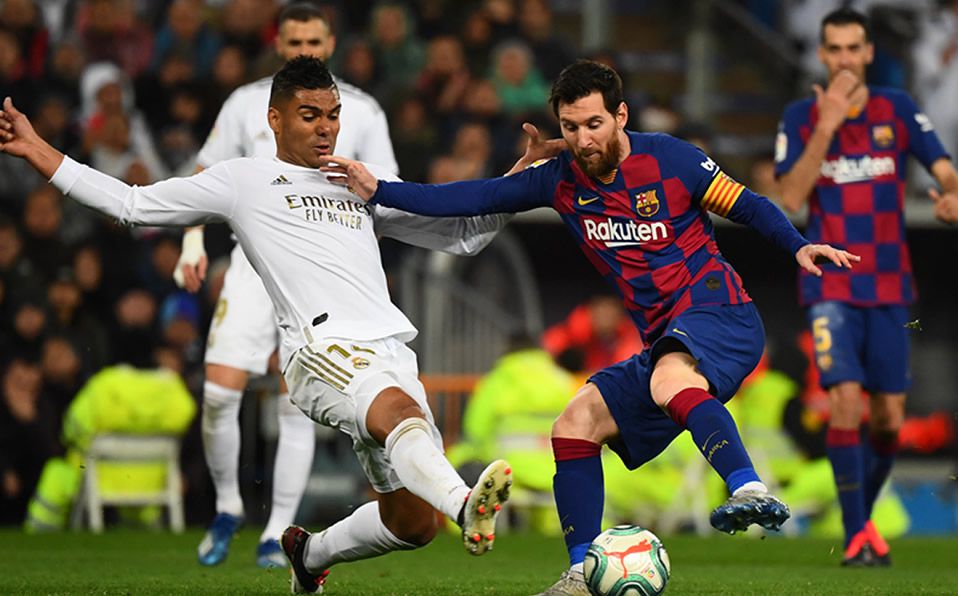 How to watch Real Madrid vs Barcelona Live TV and Stream

If you want to watch the game on TV, your options is: Bein Sports.

Three years without being able to beat the fierce rival make Lionel Messi, besides being a good player, a player with revenge and thirst for victory. 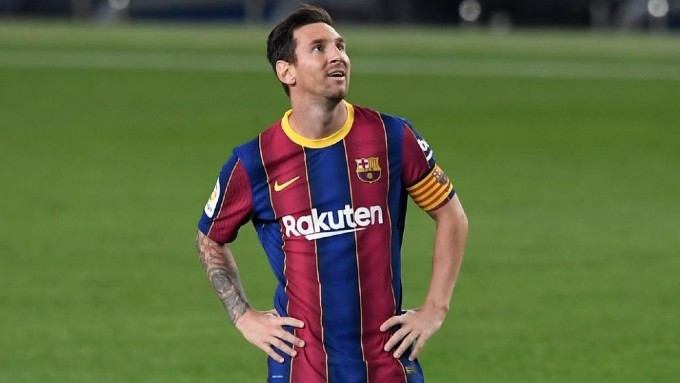 Belgian goalkeeper Thibaut Courtois has been key to Real Madrid's comeback and in this kind of matches goalkeepers are usually key to get the result. 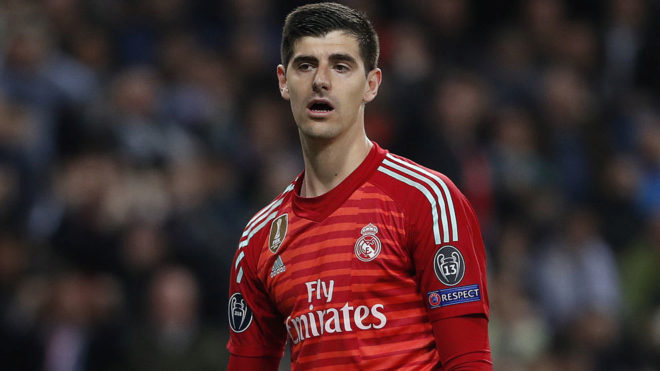 Faced with how fast Madrid's players are, mainly Vinicius, the defense will have to be careful about making mistakes and getting one-on-one on the flanks.
4:35 AMa month ago

Real Madrid: to be forceful

Despite the losses that Zidane's team has, especially at the back with Ramos and Varane, the actions that they generate as well as against Liverpool must have the forcefulness to have a good result.
4:30 AMa month ago

Since the fight for the title is a matter of three, this match will be fundamental to determine who will win it, since the winner will be more alive than ever and the loser will take a step backwards and, with a few dates left, it will be difficult to get up.
4:25 AMa month ago

The Real Madrid vs Barcelona match will be played at the stadium Alfredo di Stefano, in Madrid. The kick-off is scheduled at 3pm ET.
4:20 AMa month ago

Welcome to VAVEL.com’s LIVE coverage of the 2021 LaLiga match: Real Madrid vs Barcelona! 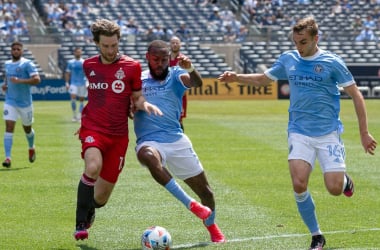 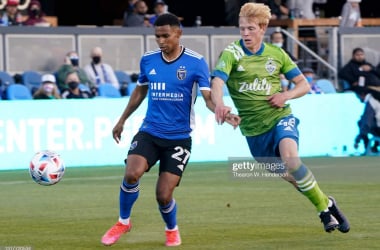