PER2
ENDa day ago

Leadup to the Match:

As the opening whistle blew to start the game, the fans at Exploria Stadium were pumped and ready to go. The emotional rivalry and energy that these two teams leave on the pitch when they face each other is something that you can see and feel. The highlight of which came most recently during the 2020 MLS is back tournament where red cards and awkward officiating lead to a penalty shoot out that featured Argentine CB Rodrigo Schlegel in as goalkeeper, who made an incredible save vs NYCFC and had a reaction that must be seen to be understood. After all that emotion Benji Michel then had to step up and convert his penalty shot and went on to leave no doubt as he buried his chance from the spot into the top corner to win the game for Orlando as they advanced in the playoffs.

For this latest installment of this rivalry between these MLS expansion twins a tight game was to be expected as they have split the points four of the last five matches between them, with Orlando taking the lone win.  However, the play during the first half of this game felt deliberate and methodical, and at times very stiff and rigid. It had the feeling of a training ground exercise and practice that didn’t give the fans much to be excited about. A few shots on goal for each team but all in all a pedestrian first half. Orlando RB Ruan suffered an injury at the end of the half and needed to be subbed off during the halftime intermission, Joao Moutinho would replace him. NYCFC would have the advantage at the end of the first half with better chances on goal but nothing on the score sheet separated the two teams at half time.

As we skip ahead, the 2nd half started exactly how Orlando City SC needed it to with Coach Oscar Pareja making a tactical adjustment asking midfielder Junior Urso to get into more attacking positions.  This in turn helped open wide spaces on the pitch and put New York City FC on the back foot. Almost immediately Orlando were able to take the lead with a 52’ minute goal by the Portuguese international Nani. Urso drove the ball through the middle and pushed a pass slightly behind the puppet master Mauricio Pereyra. You had a delightful piece of skill as he turned on the ball and found Nani wide on the left. Very simply Nani came back across the top of the box, as Moutinho made an overlapping run, forcing NYCFC defense to stay home, the Orlando captain took the space in front of him and drove the shot past NY keeper Sean Johnson and into the back of the net! GOAL and 1-0 Orlando, and Nani’s third straight game with a goal.

Orlando continued to steadily create chances for the next 12 minutes  where it looked like a second goal was surely on the cards. This forced NYCFC to make two substitutions to try and turn the game in their favor. Although  immediately after their substitutions some inventive link up play from Nani, Jhegson Mendez and Pereyra lead to an open shot at the top of the box by Pereyra that just strayed wide to the right one NY’s goal keeper Sean Johnson. The game started to settle back down after this as the NY subs, Malte Amundsen and Ismael Tajouri-Shradi worked their way into the game.

Orlando brought in its first second half sub at the 70’ minute mark when Benji Michel came in to replace Tesho Akindele to a round of applause for the city faithful for his efforts on the pitch today. NYCFC lost right back Anton Tinnerholm at the same time to what appears to be an upper leg injury. Benji had energy and made some runs, but unfortunately never really appeared to get into a rhythm with his teammates during this one.

NYCFC earned a penalty as Moutinho dived in for a poor and clumsy challenge on Tajouri-Shradi that forced the ref to call the penalty. As Valentin Castellanos set up to take the penalty for NY “The WALL” of supporters were behind their goalkeeper, Peruvian international Pedro Gallese. Castellanos had just enough of a hesitation in his run up to force Gallese to dive to his right as he slid the penalty shot into the bottom left corner of the keeper. Orlando  had now given up just their second goal of the season and the first at home this year.  While Castellanos had now scored four consecutive games to open the 2021 MLS season.

The momentum of the game appeared to switch in favor of NYCFC with their subs and the converted penalty, as they continued to create chances including an 85 minute curler from Castellanos that beat Gallese but just drifted wide of the far post. Orlando would not have another good chance, their best was a ball that Moutinho put back into the box from a set piece that Benji Michel gets a head to and flicks on goal for a comfortable save for Johnson.

Orlando City will leave disappointed with a 1-1 draw as they had the lead and a chance to sit alone as number one in the eastern conference early in the 2021 season. Even more they would have wanted to take the 3 points to continue the momentum they are building as a team, and in this rivalry. However starting the season unbeaten through their first four is quite an accomplishment. NYCFC almost stole this game with an extra time 93+ minute run over the top by Jesus Medina that left him in on goal with a 1 vs 1 with Gallese. The Orlando keeper stood strong with the Orlando City supporters in the wall behind him and made the play of the game to keep this game tied and allowing his team to walk away with a point. NY will be happy with the point as it puts them in the number one spot on the table.

The Octopus secures the draw at the death! pic.twitter.com/zMNynhSRQc

Orlando now travels to DC United on May 16 to face a struggling DC United team that has lost their last three games all away, and struggled to score. Orlando will look to attack their defense early as it has allowed eight goals over the losing streak. NYCFC will play host to Toronto FC who are on a three game skid of their own and will most likely still have tired legs after also playing matches in the quarter finals of the CONCACAF Champions League over the last few weeks. Looking forward NYCFC and Orlando City play each other again on July 25 with NYCFC hosting the Lions and you can bet the Lions will be looking to take the action right to NY. 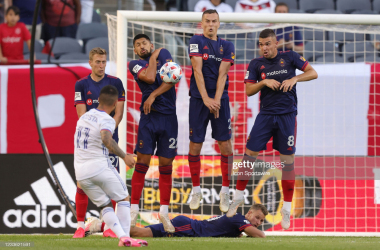 Seattle Sounders: What is Schmetzer's secret to unbeaten start? a day ago

Chicago Fire vs FC Cincinnati preview: How to watch, kick-off time, team news, predicted lineups, and ones to watch 2 days ago