Thank you reader of VAVEL!

Thank you for streaming to this match here on VAVEL. Have a nice day and see you next time!
1:54 PMa year ago

With a goal by Adams, Scotland beats Luxembourg in International Friendly!
1:51 PMa year ago

We'll have three more minutes in the game.
1:45 PMa year ago

Substitutions in Luxembourg: Skenderovic and Thill are out for Da Mota and Da Graça.
1:42 PMa year ago

Substitution in Scotland: out goes Dykes and in comes Nisbet.
1:40 PMa year ago

Dykes received inside the box and tried to hit it over the top, but the goalkeeper threw himself on the ball and saved Luxembourg. Then Dyjes received a cross and headed the ball away!
1:37 PMa year ago

Yellow for Thill, who just came in, for a very strong collision with Gilmour, basically a tackle. It would be a foul in the NFL.
1:32 PMa year ago

Substitution in Luxembourg: Sinani is out, Thill is in.
1:30 PMa year ago

On the cross coming from the left Adams went high and headed for the goal, but he fouled before the shot and the goal was disallowed.
1:29 PMa year ago

Skenderovic hit from outside the area and almost sent it out of the stadium.
1:26 PMa year ago

Rodrigues received in the middle, put it away and hit it from outside the area, but in the hands of Marshall.
1:25 PMa year ago

Substitution in Luxembourg: Deville out, Bohnert in. In Scotland Robertson and O'Donell went out to Paterson and Fraser.
1:21 PMa year ago

Morris got a great save on Dykes' shot. On the rebound he himself set up Gilmour, who dribbled into the box, dribbled past two defenders and hit the ball hard, to a great save by Gilmour. In the corner McTominay made the free-kick.
1:18 PMa year ago

O'Donnel crossed and Dykes was able to score, but he touched the ball with his hand in his domain and the goal was disallowed.
1:17 PMa year ago

McKennie got his shot from outside the box, with a deflection and sent it into the goal, but Morris put it for a corner, which was already beaten and the defense took it away!
1:13 PMa year ago

A cross into the box and Mahmutovic got away with a strong header.
1:13 PMa year ago

From the left another corner for Scotland.
1:11 PMa year ago

On a cross from the left Mahmutovic deflected it for a corner, which was already beaten into the ground, with possession for Scotland.
1:10 PMa year ago

A corner is taken and Morris has it in the small area.
1:09 PMa year ago

Gilmour took off down the middle, got past the defense and hit a cross, but Morris sent it for a corner!
1:06 PMa year ago

Rodrigues takes the first touch on the ball and it rolls into the second half of Luxembourg and Scotland.
1:01 PMa year ago

The players appear on the pitch to start the second half of the match. And in Scotland we will have substitutions. Out come Gallagher and McGregor for Gilmour and McKenna.
12:51 PMa year ago

With a goal by Che Adams, Scotland wins Luxemurgo away from home!
12:47 PMa year ago

Gallagher got the header, but sent it over the crossbar.
12:39 PMa year ago

From the left, Scotland now has a corner to lift into the area.
12:38 PMa year ago

McTominay took the free-kick and sent it over the goal
12:37 PMa year ago

Dykes was streaking down the middle alone to face Moris and Selimovic pulled him, receiving a red card for the foul on the edge of the area!
12:35 PMa year ago

A corner kick taken in the middle of the area and Dykes took it from there.
12:34 PMa year ago

On Rodrigues' back pass McKennie deflected for a corner!
12:31 PMa year ago

Rodrigues is yellow carded for a foul on Tierney in the backfield.
12:29 PMa year ago

On the right Dykes got it and took it to the middle, finding Adams on the left, who hit a low shot under the goalkeeper, opening the score!
12:28 PMa year ago

Luxembourg, surprisingly, manages to press and get into the box, but still without creating any dangerous chances. Scotland, on the other hand, tries to get out at speed on the left, with Robertson, but without effectiveness so far.
12:17 PMa year ago

Robertson crossed from the left and Dykes got the header high, but sent it past Moris' left post!
12:10 PMa year ago

In the corner taken from the left Selimovic deflected it in the middle and Marshall deflected it away!
12:09 PMa year ago

Sinani hit a shot from outside the area and, with a deflection, sent it to the corner.
12:08 PMa year ago

Jans received the ball inside the box and tried a shot, but hit the defense.
12:04 PMa year ago

The match restarts now with the departure of the Scotland goalkeeper
12:03 PMa year ago

And the game is already stopped, because the ball was withered!
12:02 PMa year ago

Dykes takes the first touch on the ball and it rolls to Luxembourg and Scotland!
11:58 AMa year ago

Now the national anthems of Scotland and Luxembourg are played before the start of the match.
11:56 AMa year ago

Teams on the field!

The players appear on the field and are greeted by the fans to start the match!
11:42 AMa year ago

The players were warming up and are now back in the dressing rooms to finish their preparation and soon the ball will start rolling!
11:35 AMa year ago

Luxembourg scored only one goal in all the matches, against 11 for the Scottish National Team.
11:34 AMa year ago

Three of these matches took place at Luxembourg's home, where there was a draw, for the Euro, and two victories for Scotland, for the friendlies.
11:34 AMa year ago

Luxembourg and Scotland have met four other times in history. Three Scottish wins and only one draw. Two of these matches were friendly matches and two were Eurocup matches.
11:33 AMa year ago

The venue for today's game!

This is the Stade Josy Barthel, the venue of today's match and where the ball will roll in a few moments! 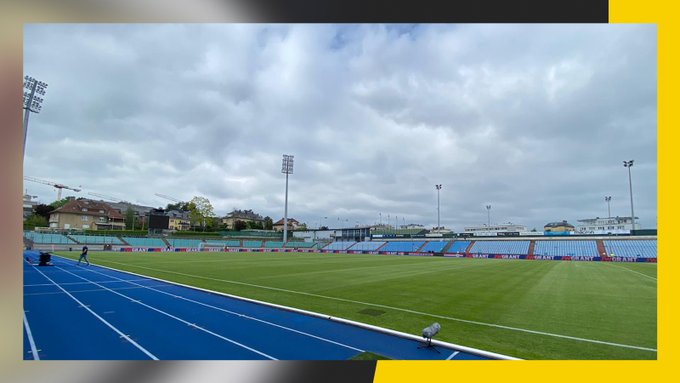 Scotland has some new additions. In defense O'Donnel starts at fullback, with McTominay at centerback. In the attack Dykes and Gallagher come on!

Scotland's national team has been lined up and comes into the match with: 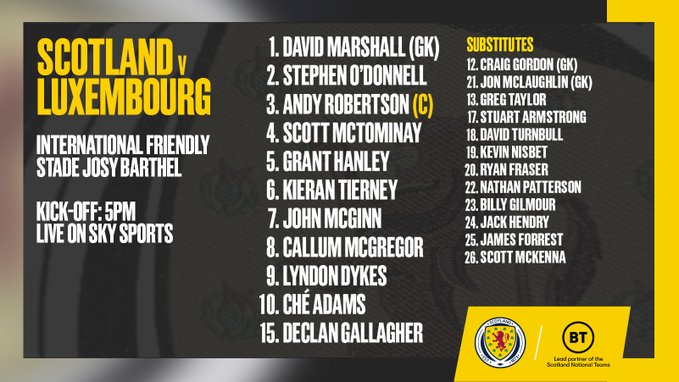 The Luxembourg national team comes with some news. In the defense De Graça gives way to Selimovic. In the middle, S. Thill and Martins Pereira are out for Skenderovic and Sinani. In the attack Da Mota gives way to Deville.
11:12 AMa year ago

Luxembourg is lined up and comes with: Moris, Jans, Selimovic, Mahmutovic, and Pinto; Skenderovic, Carlson, Sinani, and Rodrigues; Thill and Deville.
11:11 AMa year ago

Now the broadcast of the friendly match between Luxembourg and Scotland here on VAVEL Brazil begins! The match starts at the Josy Barthel Stadium at  12 pm and you can follow everything live right here!
4:28 AMa year ago

Do not miss a detail of the match with the live updates and commentaries of VAVEL. Follow along with us all the details, commentaries, analysis and lineups for this Luxembourg vs Scotland match.
4:23 AMa year ago

How to watch Luxembourg vs Scotland Live in TV and Stream

If you want to watch the game Team 1 vs Team2 live on TV, your options is: Tudun.

Considered one of the best left-backs in the world, Robertson is one of the standouts of the strong Scottish national team. Already a well-known starter for Liverpool, Robertson promises strength on the left side of the Scottish attack!
4:13 AMa year ago

Luxembourg's main player is Gerson Rodrigues. The number 10 scorer against Portugal plays for Dynamo Kiev and is the hope of victory for the Luxembourg national team!
4:08 AMa year ago

Scotland, meanwhile, are coming off a draw away from home on Wednesday. Against the Netherlands, Hendry opened the scoring, Depay tied, Nissbet equalized and Depay tied again.In World Cup qualifying Scotland has five points in group F. Above it is Denmark, with nine. Right behind are Israel and Austria, with four. Finally the Faroe Islands and Moldova have one point.
3:53 AMa year ago

Luxembourg comes after an away defeat to Norway last Wednesday (2). The top scorer of the night, as usual, was Haaland, with a goal. In World Cup Qualifying, Luxembourg is on three points from two games in group A, seeing Portugal and Serbia with seven and Ireland and Azerbaijan with no points.
3:48 AMa year ago

The match between Luxembourg and Scotland starts at 12 pm this Sunday (6), at the Josy Barthel Stadium.
3:43 AMa year ago

My name is Victor Cunha and i'll be your host for this game. We will provide you with a pre-game analysis, roster updatres and news as it happens live here on VAVEL.

Toronto FC vs Seattle Sounders preview: How to watch, team news, predicted lineups, kickoff time and ones to watch 3 hours ago
//