NOR4
END5 hours ago

Thank you here for your audience in this friendly match in preparation for the Eurocup. Thank you very much and see you next time!
4:36 PMa year ago

With seven goals, Germany beats Latvia with a rout in the last friendly before the Euro!
4:25 PMa year ago

Hummels received a good pass from Werner inside the box and tried to shoot, being stopped by the goalkeeper and the defense!
4:23 PMa year ago

Substitution in Latvia: Uldrikis out, Varslavans in.
4:21 PMa year ago

Substitution in Germany: Muller out, Musiala in.
4:20 PMa year ago

30' ONE MORE FOR GERMANY

Muller received the ball inside the box and put it in front of Sané to score the seventh goal!
4:18 PMa year ago

Saveljevs, with a beautiful shot from a distance, after a move to the side, sent it into the corner and reduced the score!
4:16 PMa year ago

Hummels received a good passse on the edge of the area, took the marking and hit hard, but out!
4:12 PMa year ago

Kimmich received a turn of play on the right, arranged for Sané, who hit hard, but out of the goal!
4:03 PMa year ago

And we will have substitutions. In Latvia, Karklins is out, Krollis is in. In Germany Gundogan, Gosens and Rudiger went out, and Gunter, Can and Sule came in.
3:54 PMa year ago

Kimmich crossed from the right after receiving from Sané and found Werner in the middle of the box to put the ball in the back of the goal!
3:50 PMa year ago

Uldrikis makes the first touch on the ball and it rolls into the second half of Germany-Latvia!
3:49 PMa year ago

The teams are on the field once again and come up with substitutions. In Germany Ikaunieks and Oss are out for Maksimenko and Tarasovs. In Germany, Gnabry and Havertz are out to replace Werner and Sané.
3:33 PMa year ago

In the first 45 minutes, FIVE goals and Germany goes on to defeat Latvia at home in this first half!
3:33 PMa year ago

Gnabry received a beautiful long pass from Hummels in the box and hit a cross to put the ball in the back of the net!
3:26 PMa year ago

Muller received a long throw-in, found Havertz on the right inside the box, who took the defender out and hit a cross, with a deflection off the goalkeeper, to score the fourth goal!
3:24 PMa year ago

Kroos shot from a distance, and Ozols sprawled in the small area. On the rebound Gnabry shot, but blocked by the defense!
3:22 PMa year ago

Yellow card for Gundogan and for Oss, for a start of confusion, which has now been controlled.
3:14 PMa year ago

Gosens went to the back line, after a pass from Gnabry, crossing and finding Muller to put it in the back of the net!
3:12 PMa year ago

Gosens crossed the ball from the left, the defense didn't clear and Kimmich dominated on the right, hitting it hard and hitting the post!
3:08 PMa year ago

Havertz, on the right, found Gundogan in the middle, who attempted the pass and took the rebound from the defense's cut, finishing outside the box and sending it high into the air, with no chance for Ozols!
3:06 PMa year ago

Havertz's cross received the ball on the end line, and Gosens came in, finishing high up to open the scoring!
3:05 PMa year ago

Yellow card to Zjuzins, for a foul in the midfield.
3:04 PMa year ago

Havertz crossed the ball from the left and Muller came in to finish, but it went wide of Ozols right side!
3:00 PMa year ago

Ginter crossed into the box and the ball deflected twice before Gnabry deflected off!
2:58 PMa year ago

Havertz received on the left, inside the penalty area, and hit it hard, cross, but out!
2:47 PMa year ago

Ginter found Muller inside the box, who beat the goalkeeper and won a corner, already taken quickly.
2:46 PMa year ago

Muller gets his first touch on the ball and it rolls into the first half of the friendly match between Germany and Latvia!
2:43 PMa year ago

The national anthems of Germany and Latvia are now playing.
2:41 PMa year ago

The players appear on the field to start the match!
2:32 PMa year ago

The players go back to the locker rooms to continue their preparation and later take the field to start the match!
2:21 PMa year ago

In those three games Germany scored six goals, averaging two per game, with only one scored by Latvia.
2:21 PMa year ago

Germany has hosted Latvia only once as a host nation. On that occasion, in a friendly match, Germany emerged 3-0 victorious.
2:21 PMa year ago

The two teams have met only three times in history, with Germany winning twice and drawing once. In friendly matches, such as today, Germany won both.
2:18 PMa year ago 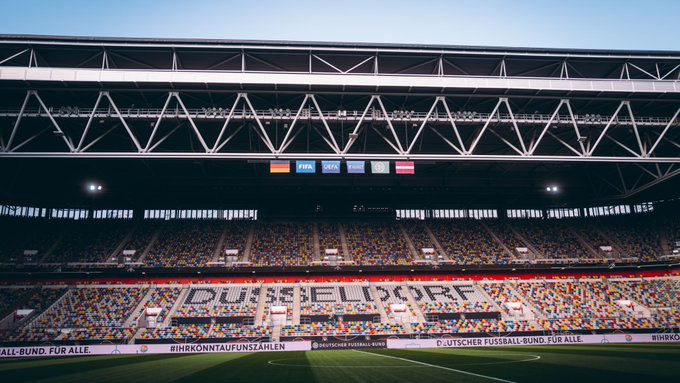 The German and Latvian players take to the pitch to start their warm-up exercises for the match.
2:01 PMa year ago

Line up of Latvia

New additions to the Latvian lineup are Fjodorovs, Ozols, Ikaunieks and Uldriks
1:56 PMa year ago

There are many new additions to the German team. In defense Hummels and Rudiger will play. In the middle Gundogan and Kroos come in, and in the attack Havertz starts.
1:46 PMa year ago

Germany has the following line-up for the friendly match: Neuer, Ginter, Hummels and Rudiger; Kimmich, Kroos, Gundogan and Gosens; Havertz, Muller and Gnabry. 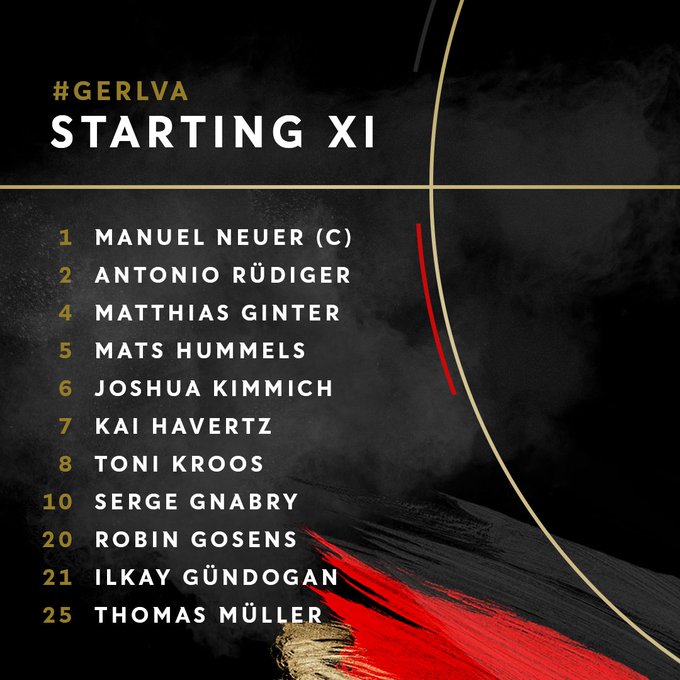 Welcome to the broadcast of the Germany-Latvia match, the International Friendly before the start of the Euro Cup!
1:36 PMa year ago

How to watch Germany vs Latvia Live in TV and Stream?

If you want to watch the game Germany vs Latvia live on TV, your options is: Tudun.

If you want to directly stream it: Streaming services and Tudun app.

The eye in Latvia is on Uldrikis. With a goal in the national team's last match, the 23-year-old young striker is one of the team's standouts with his 6.4 feet!
1:21 PMa year ago

Manuel Neuer continues to be Germany's main man. The cool goalkeeper has held his position as one of the best in the world for many seasons now and could be decisive in another Germany match.
1:16 PMa year ago

Latvia comes in after beating Lithuania last Friday (4) in the Baltic Cup. Beneta, against, Emsis and Uldrikis scored the three goals for Latvia, while Golubickas scored the goal of honor for Lithuania. In group G Latvia has one point from three games and is in fifth place, just ahead of Gibraltar. Above them are Turkey with seven and the Netherlands, Montenegro and Norway with six.
1:01 PMa year ago

Germany arrives after drawing with Denmark in another friendly last Wednesday (2). Neuhaus opened the scoring and Pulsen equalized. In World Cup Qualifying group J Germany is in third place with six points, tied with North Macedonia, three behind Armenia and three ahead of Romania and Iceland. Liechtenstein closes the group with no points.
12:56 PMa year ago

Welcome to VAVEL.com’s coverage of the International Friendlymatch: Germany vs Latvia Live Score!