NOR4
END6 hours ago

We thank you for following the broadcast and invite you to join us next time.
12:59 PMa year ago

The match that brought together the teams of Cameroon and Nigeria for the second time in less than a week came to an end.

This time the match ended goalless and despite Cameroon's dominance during almost 80 minutes of play, they did not manage to win and will have to work a little on their definition for what is coming, which is the second round of the African Qualifiers for the World Cup in Qatar 2022.

On the other hand, Nigeria must also work a lot on their team, as they are unable to create a collective game that allows them to hurt the opponent easily, they will also play the second round of the African Qualifiers for the World Cup of Qatar 2022.

Cameroon has a very tired team and it is reflected on the field, where Nigeria has been with the ball in the opponent's half and playing close to the opponent's area.
12:53 PMa year ago

In these last minutes Nigeria tried to equalize the match, managed to get more possession, but never bothered the Cameroonian team, which although not winning by bad definitions, it has shown a good offensive soccer and play on the wings.
12:48 PMa year ago

There will be 15 minutes left in this match for either side to break the deadlock and emerge victorious from this official FIFA international friendly.
12:46 PMa year ago

The possession is 61% for Cameroon and 39% for Nigeria.

This shows the great dominance of the Cameroonian team.

There is a yellow card for Collins for a strong foul in the opponent's half, both teams have a yellow card.
12:37 PMa year ago

Cameroon prepares several changes for the remainder of the match.

Nigeria continues to hold the game rather than play it.

Nigeria's goalkeeper is starting to be the star of the match, after saving 4 dangerous plays generated by Cameroon so far.
12:31 PMa year ago

The same trend of the first half continues, with Cameroon attacking down the flanks, dominating the game, but unable to score the goal that would give them the lead.
12:30 PMa year ago

The ball is rolling and the second 45 minutes of this exciting match are underway.
12:26 PMa year ago

Cameroon dominated the game and managed to have more than 65% of possession, but having the ball is of no use to them if they cannot score in the opposing goal.
12:25 PMa year ago

Despite Cameroon's dominance, neither team managed to score.
12:25 PMa year ago

The first half hour of play is still a stalemate, with Cameroon dominating more, but despite that and being the constant, they have no luck to open the scoreboard.
12:22 PMa year ago

Malong is fouled and receives his first yellow card of the match, the Cameroonian team plays with more intensity.
12:21 PMa year ago

Now it is Nigeria who is trying, playing on the wings but without enough depth to score.
12:19 PMa year ago

The Cameroonian team dominated possession and the match, but despite their insistence on the opponent's goal, they were unable to open the scoring.
12:13 PMa year ago

Big domination of Cameroon in this beginning of game in spite of the score of virgin parity for the moment.
12:12 PMa year ago

The score remains scoreless, with Cameroon dominating a little more but without much depth and with little action in the opposing goal.
12:11 PMa year ago

The match was very disputed in the first minutes, with a lot of play in the midfield and little action near the areas.
12:08 PMa year ago

Cameroon moved and the match is played.
12:00 PMa year ago

The match will start

The captains' draw has been made, everything is ready and only the referee's order is needed to start today's match.
11:57 AMa year ago

The anthems of both countries are played, then the captains will be drawn.
11:55 AMa year ago

The referee gives the order and in an orderly fashion the Cameroonian team comes out first and then the Nigerian team.
11:53 AMa year ago

Teams in the Mixed Zone, only the central referee's order is missing, so that they can take the field and the match can begin.
11:49 AMa year ago

Everything is ready for the teams to take the field, it is expected that at any moment they will be in the mixed zone and together with the referee team, they will take the field to start today's match.
11:46 AMa year ago

The players will go to the dressing room, change and go out to the mixed zone where the referees will give the signal for them to take the field.
11:40 AMa year ago

The warm-up continues, both teams play 'little games' with the ball and begin to end the warm-up.
11:31 AMa year ago

The teams continue to warm up and work with the ball in order to be ready to play this very good friendly match on an official FIFA date.
11:30 AMa year ago

The teams are about to take the field to begin their respective warm-up, first they will do it physically, then they will work with the ball.
The goalkeepers are working separately.
11:23 AMa year ago 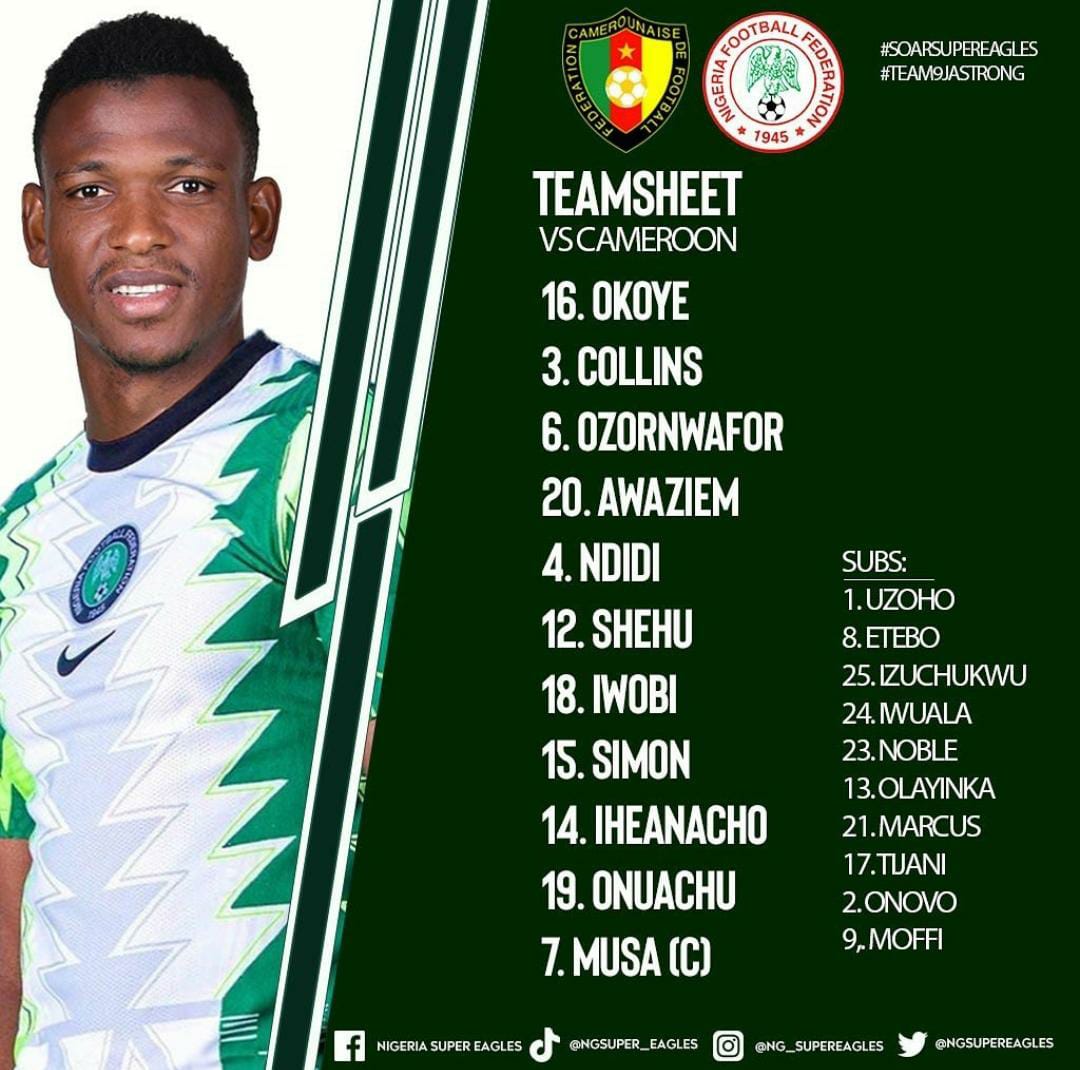 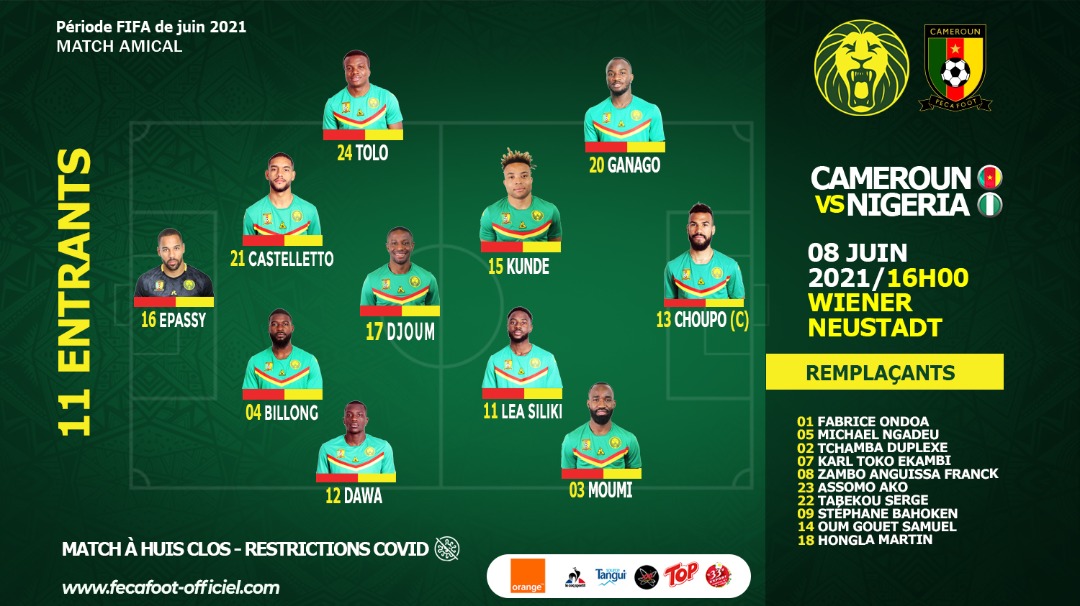 In the final match, Cameroon had more ball possession but only one shot on goal, which was enough to make the difference and take the win.
10:40 AMa year ago 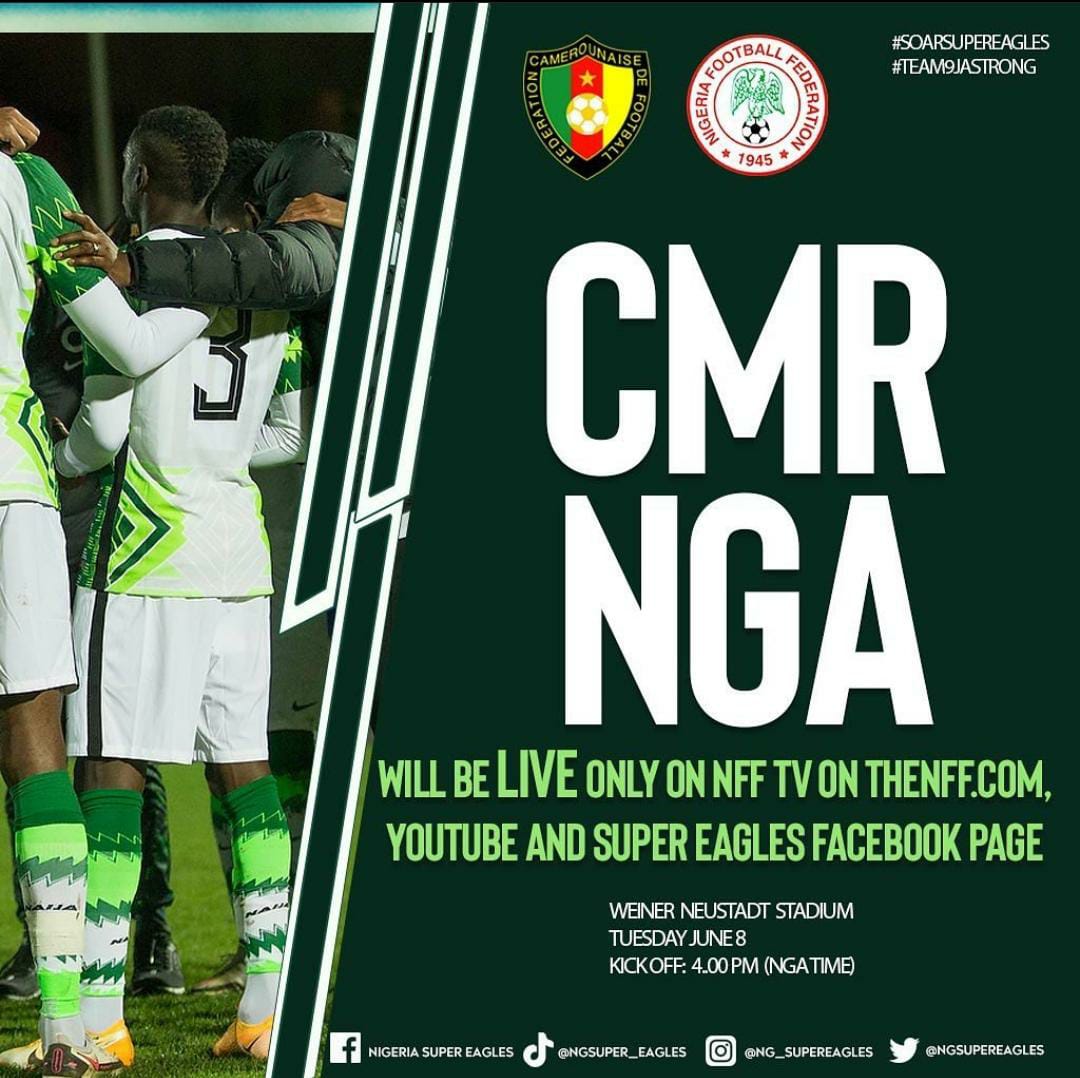 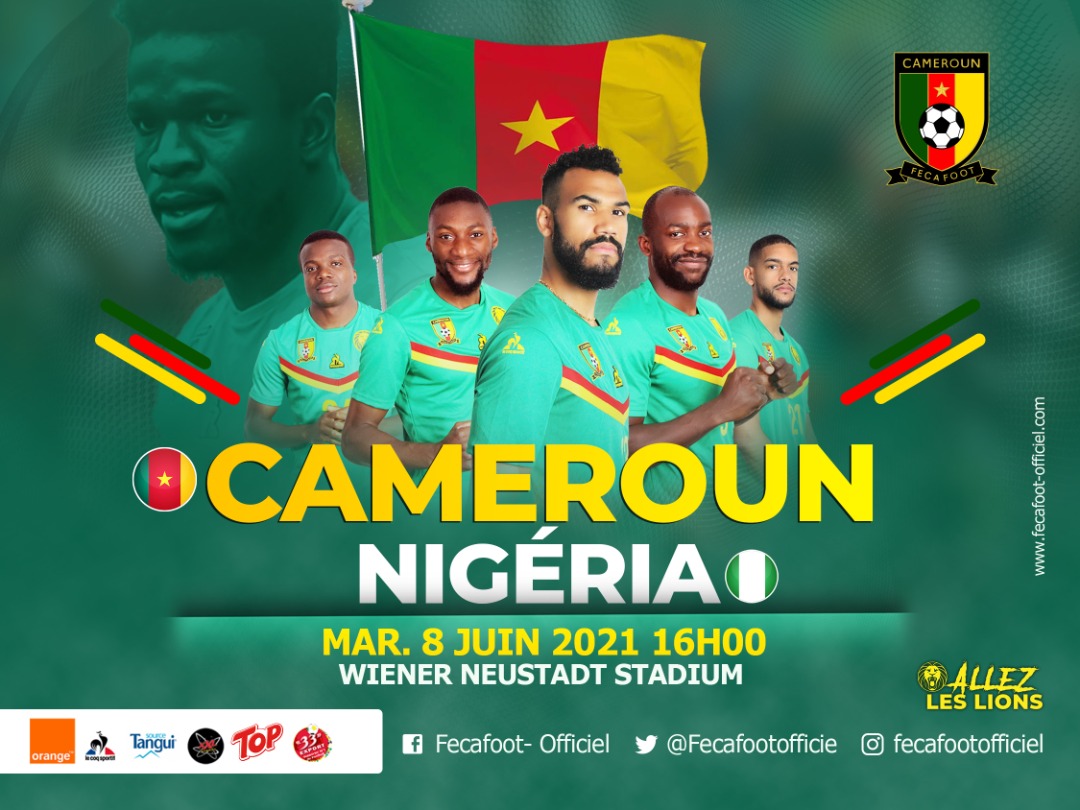 From very early in the morning, the teams have been using their networks to share and live the preview of today's match.
4:32 AMa year ago

Where, when and how to watch Cameroon vs Nigeria live?

Where to watch: No broadcast

The match will not be broadcast on TV in USA, but if you want to follow the game live on the internet, VAVEL is your best option.
4:22 AMa year ago 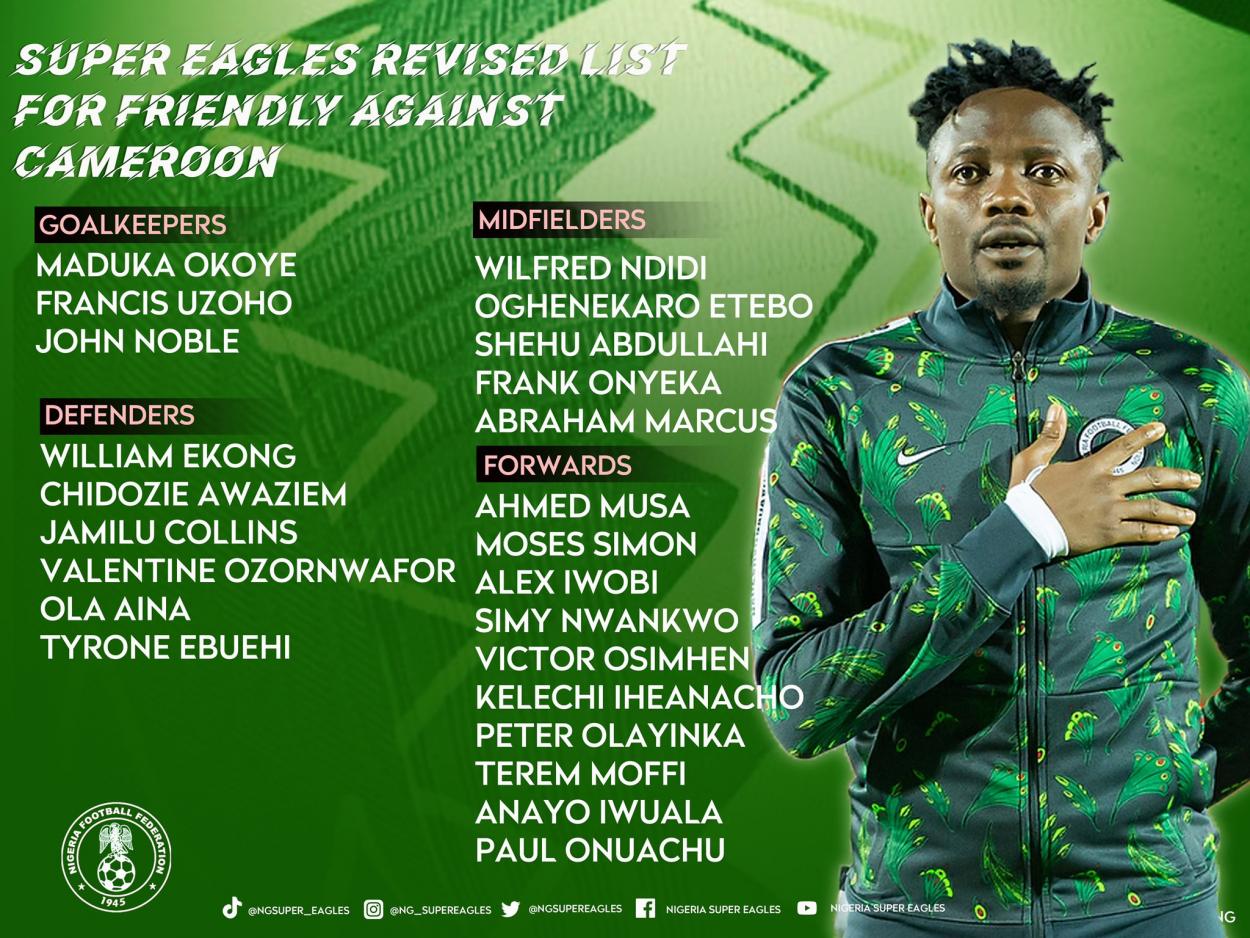 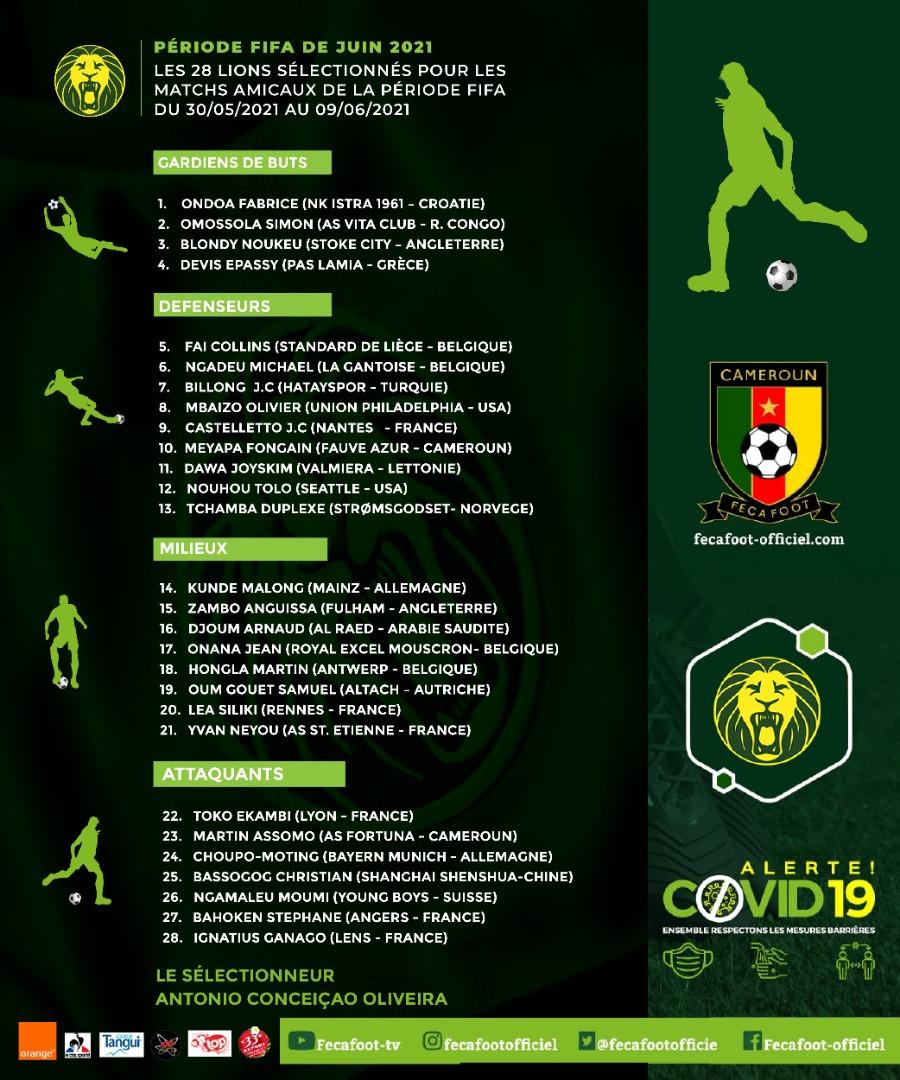 Today's standout is Paul Onuachu, a Genk player from Belgium who has scored in two of the last three games for his national team and is proving to be an important striker for his team.
4:07 AMa year ago

Today's highlight is André Zambo, a midfielder who plays for Fulham in England, who scored in the previous friendly and is one of the stars of the team.
4:02 AMa year ago

Nigeria's last game as a visitor

It was in the 0-1 victory over Benin, on matchday 5 of the group stage of the African qualifiers for the Qatar 2022 World Cup.
3:52 AMa year ago

It was in the 0-0 draw against Rwanda, on matchday 6 of the group stage of the African qualifiers for the Qatar 2022 World Cup.
3:47 AMa year ago

How does Nigeria arrive?

The Nigerian national team has just lost to Cameroon in a friendly match by 0-1, before that, they qualified to the second round of the African Qualifiers for the Qatar 2022 World Cup.
3:42 AMa year ago

How does Cameroon arrive?

It has just won a friendly match on June 4 against Nigeria by the minimum difference, before that, it qualified to the second phase of the African Qualifiers for the Qatar 2022 World Cup.
3:37 AMa year ago

Hello everyone! Welcome to the Cameroon vs Nigeria, valid for international friendly.