We end today's broadcast and invite you to follow us next time.
5:37 PMa year ago

The visitors won with a very good first half, but with a second half where the level dropped a lot. The Algerian team was enough to take the victory in this great international friendly.

Tunisia lacked offensive play that represented danger in the areas and had a hard time reaching the opponent's area.

Algeria showed two sides, a very fast offensive game, with order and precision, but also a game of construction and creation.

Although they did not manage to hold their opponents, what they did in the first half was enough to win and not suffer the match.

The final stretch of the match arrived and Tunisia could not even get on the scoreboard.
5:29 PMa year ago

The game will be played for 5 more minutes.
5:29 PMa year ago

Out: Feghouli and Mahrez

In: Abeid and Ghezzal

Guedioura is fouled and as he already had a yellow card, the referee decides to send him off.
5:25 PMa year ago

The intensity of the match has dropped a lot, the game is no longer played in the areas, the ball is no longer delivered well and the players' exhaustion is noticeable.
5:22 PMa year ago

With the changes, Tunisia showed a different face, a little more offensive and with more depth, creating danger in the Algerian area.
5:21 PMa year ago

Changes are prepared in both teams.

They will exhaust all available changes.

There was a lot of fighting for the ball in the midfield, little offensive order, few actions in the goals and a lot of fouls.
5:16 PMa year ago

The game is played with a lot of intensity, but with little order and technique.

In addition, there is no real danger in the area.

The game is still going strong and there are already two yellow cards for each team, too few for so many fouls.
5:12 PMa year ago

The intensity of the game dropped again, there was not much action in the areas and Tunisia, who tried with more desire than order, did not have good depth, nor did they manage to create real danger in the opposing goal.
5:08 PMa year ago

Khazri, who is Tunisia's best player, received a low cross from the left and couldn't get on the end of it to put the score on the scoreboard.

An offensive wave in Tunisia's area, Algeria is close to scoring the third and the home team is holding on.
5:04 PMa year ago

The Algerian counter was coming, Mahrez had 3 delivery options, but the player took too long to give the pass and when he wanted to do it, he ended up losing it.
5:03 PMa year ago

Great fast play by Tunisia, which ended with Khazri's shot in the box that the goalkeeper sent to the corner.
5:01 PMa year ago

In: Khaoui and Montassar Talbi

Tunisia settles in the opponent's field and tries to score, but Algeria holds the game very well and does not suffer the score.
4:58 PMa year ago

Tunisia loses the ball very quickly and struggles to get into the final quarter of the field.
4:55 PMa year ago

High possession continues for Algeria, which has 62% and Tunisia has 38%.
4:54 PMa year ago

Changes were made at halftime

Out: Ali Ben Romdhane and Oussama

In: Hamza Rafia and Ali Maaloul

Possession is once again starting to go to Algeria and a lot of play is taking place in the home side's half.
4:51 PMa year ago

Feghouli is heavily fouled and there is a dangerous free kick for Algeria to be taken by Mahrez in front of goal.
4:48 PMa year ago

Skhiri took a shot from half distance and the goalkeeper saved and controlled it in two times.
4:46 PMa year ago

The game is played in the middle of the field and there is no clear dominator of the ball.
4:43 PMa year ago

The same tone of rough play continues, with repeated fouls in the first few minutes.
4:43 PMa year ago

The home team moved and the second half of this exciting international friendly is already underway.
4:25 PMa year ago

With a better game and greater offensive capacity, the Algerian national team won calmly and comfortably by 2-0 in this first half.

On the other hand, Algeria played comfortably and loaded their offensive production on the flanks, and both goals came from set pieces that helped them to change their depth and good collective construction into goals.

Two additional minutes will be played.
4:16 PMa year ago

Wahbl's long-range shot was saved by the Algerian goalkeeper.
4:15 PMa year ago

Tunisia's offensive inability is partly due to their poor third quarter delivery.
4:13 PMa year ago

It is incredible that this match, with so much rose and fouls, only had one yellow card, Tunisia's strong play was more predominant than its offensive quality and Algeria is slowly starting to fall into this game and committing many fouls.
4:11 PMa year ago

The intensity of the match as such dropped, Algeria did not try to attack as in the first minutes and Tunisia could not find its soccer and be able to reach the opponent's area collectively.
4:08 PMa year ago

Algeria's intensity dropped a bit, so the possession started to be more divided and Tunisia took advantage of that to play in the opponent's half and could score before the end of the first half.
4:07 PMa year ago

Tunisia tried to react and moved forward a little in an attempt to gain more men in the middle and dominate possession of the ball.
4:05 PMa year ago

Algeria's attacking power is still in full force, as they want to increase the score and their insistence on the flanks allows them to reach the opponent's area very easily.
4:03 PMa year ago

The team's star player took the shot, which was a half-hearted shot that bent the goalkeeper's hands and went powerfully into Tunisia's goal.
4:02 PMa year ago

A very dangerous free kick on the edge of the box, which Mahrez collects, has not yet been taken.
4:00 PMa year ago

Feghouli was alone in front of the goalkeeper, but Bronn came from behind and before he entered the area, he committed a strong foul that everyone asked to be sent off, but the referee sanctioned it and only gave a yellow card.
3:58 PMa year ago

Hard play continues in the match, but the referee has yet to issue a card.
3:55 PMa year ago

A cross into the box from the right, Belaile received the cross and brought it down for Bounedjah, who half-volleyed a first-time shot to score the first goal.
3:53 PMa year ago

Another Algerian goal and this time, it was the defensive line that saved and prevented the first goal of the match.
3:51 PMa year ago

Algeria had a chance with Mahrez, who arrived in the box on the right, received the pass and shot immediately on the ground, but the goalkeeper saved his team's goal.
3:49 PMa year ago

The match has a lot of friction and unnecessary fouls, which heat up tempers a bit and cause the game to be interrupted a lot.
3:46 PMa year ago

The game was all played in the home team's half, who held off the attacking wave of the visitors and tried to keep a clean sheet.
3:45 PMa year ago

A free kick from the left flank generated danger in the Tunisian goal. Mahrez took it to the far post, but no one could change the direction of the ball and it ended up going wide.
3:42 PMa year ago

Tunisia continues to foul and the Algerian players protest.
3:40 PMa year ago

The match was a bit disputed in the middle of the field, but with a slight superiority of Algeria.
3:38 PMa year ago

The Algerian team is starting to play a little better, with more depth in the field.
3:36 PMa year ago

First foul of the match, on the player Mahrez and the visitors have a set piece in the middle of the field.
3:34 PMa year ago

The game is being played in the home team's half, with Tunisia dominating the ball in these first few minutes.
3:33 PMa year ago

Algeria moved and the friendly match is already being played in Tunisia
3:29 PMa year ago

The match will start

The captains' draw has been made, everything is ready and only the referee's order is needed to start today's match.
3:26 PMa year ago

The anthems of both countries are played, then the captains will be drawn.
3:24 PMa year ago

The referee gives the order and the Tunisian team comes out first and then the Algerian team.
3:17 PMa year ago 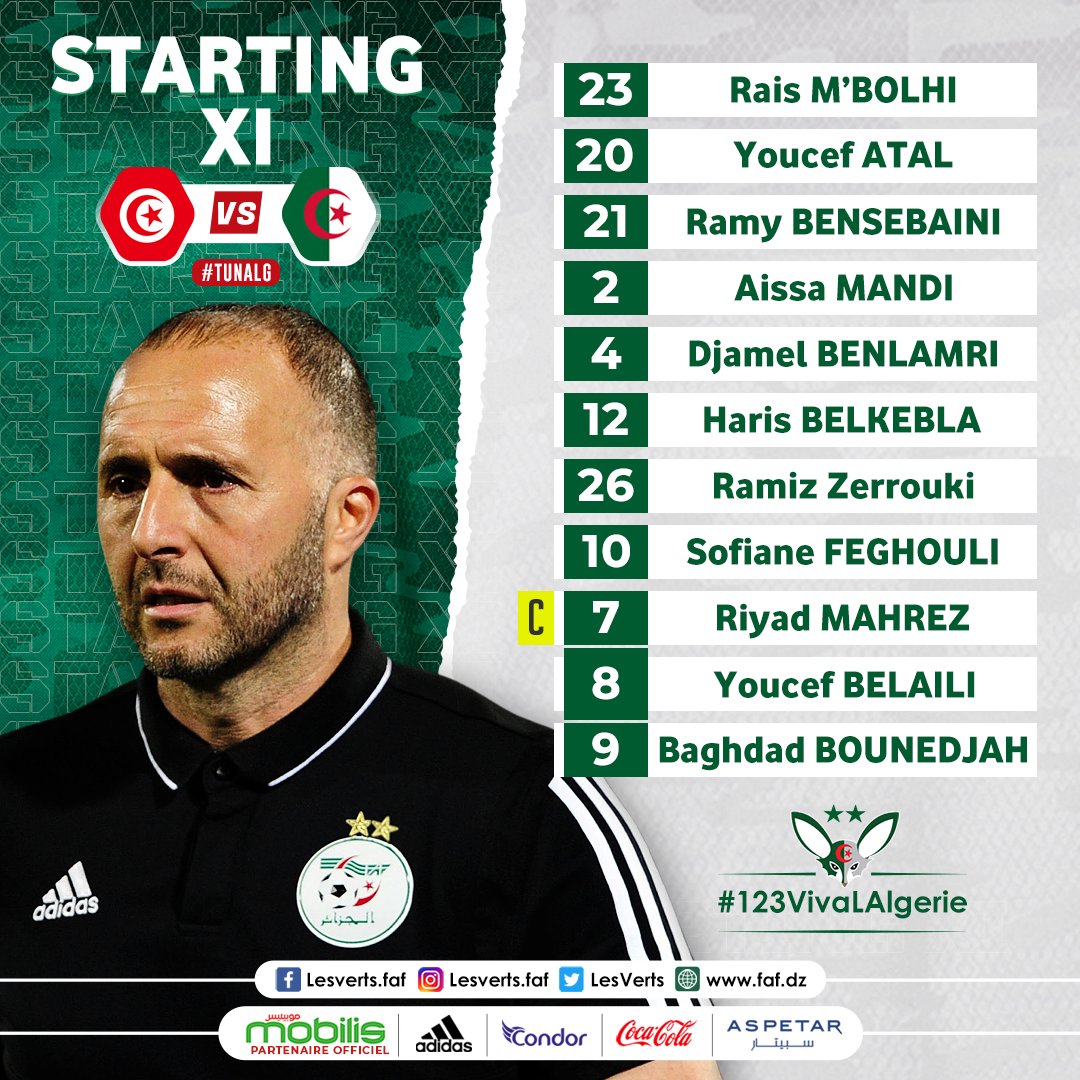 Teams in the Mixed Zone, only the central referee's order is missing, so that they can take the field and the match can begin.
3:11 PMa year ago

Everything is ready for the teams to take the field, it is expected that at any moment they will be in the mixed zone and together with the referee team, they will take the field to start today's match.
3:07 PMa year ago

The players will go to the dressing room, change and go out to the mixed zone where the referees will give the signal for them to take the field.
3:06 PMa year ago

The warm-up continues, both teams play 'little games' with the ball and begin to end the warm-up.
2:53 PMa year ago

The teams continue to warm up and work with the ball in order to be ready to play this very good friendly match on an official FIFA date.
2:48 PMa year ago

The teams are about to take the field to begin their respective warm-up, first they will do it physically, then they will work with the ball.
The goalkeepers are working separately.
2:38 PMa year ago

The teams' current streak of success

Tunisia won 4 of the last 5 matches they played, the remaining match was tied.

Algeria, on the other hand, won its last 3 matches and before that, drew two in a row.

Both teams are unbeaten in their last 5 matches. 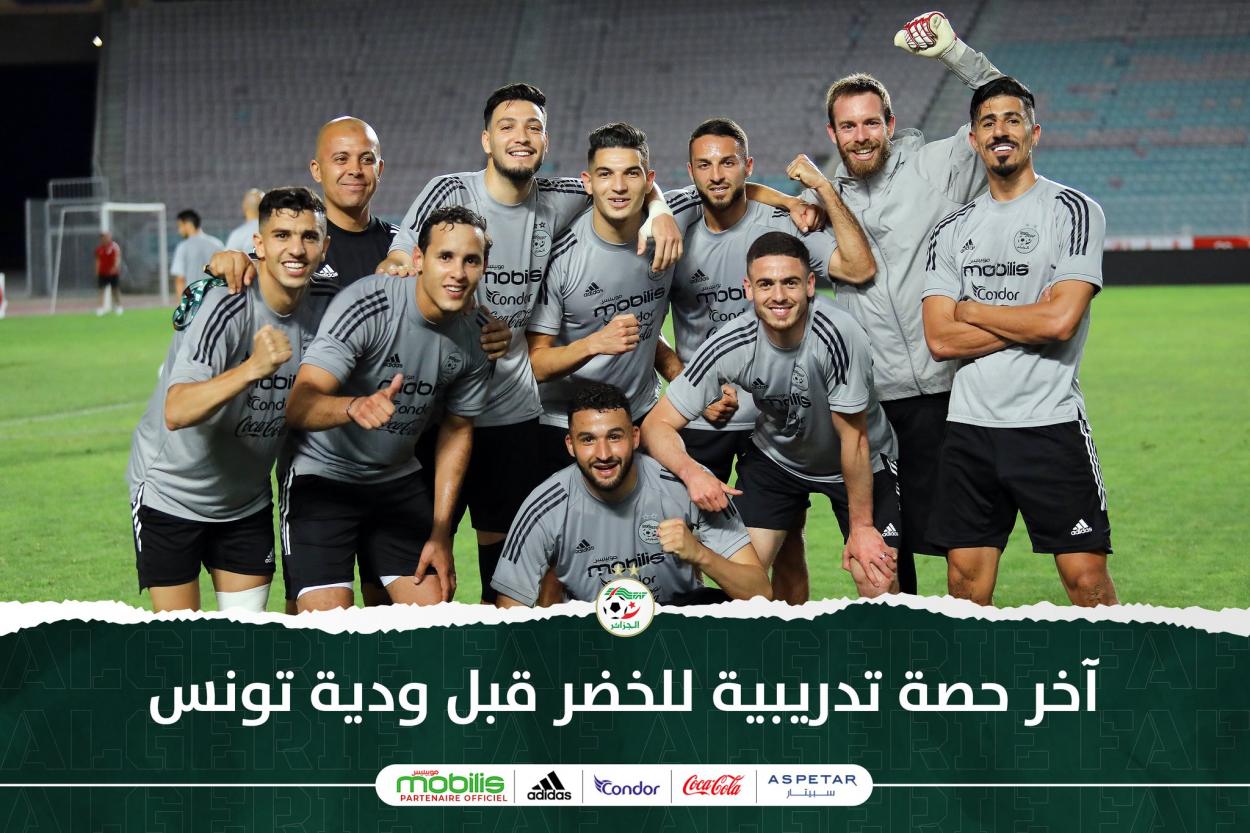 From very early in the morning, the teams have been using their networks to share and live the preview of today's match.
11:58 AMa year ago

Where, when and how to watch Tunisia vs Algeria live score?

Where to watch: No broadcast

The match will not be broadcast on TV in USA, but if you want to follow the game live on the internet, VAVEL is your best option.
8:49 AMa year ago 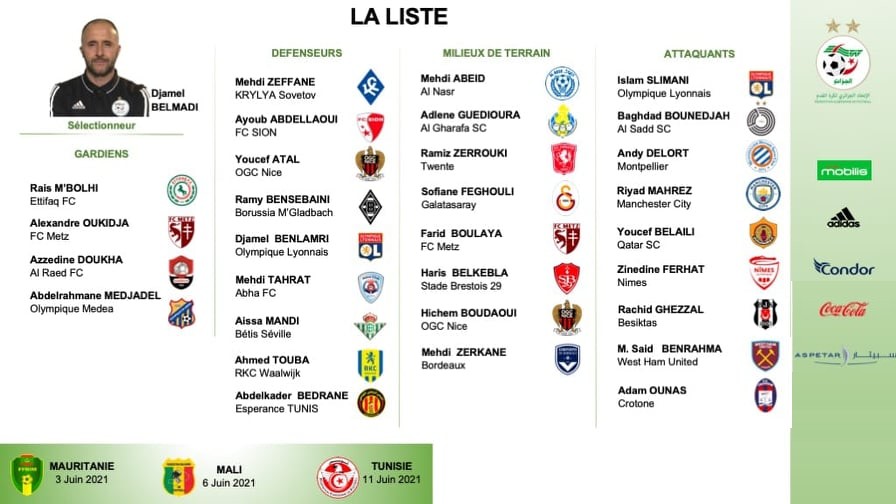 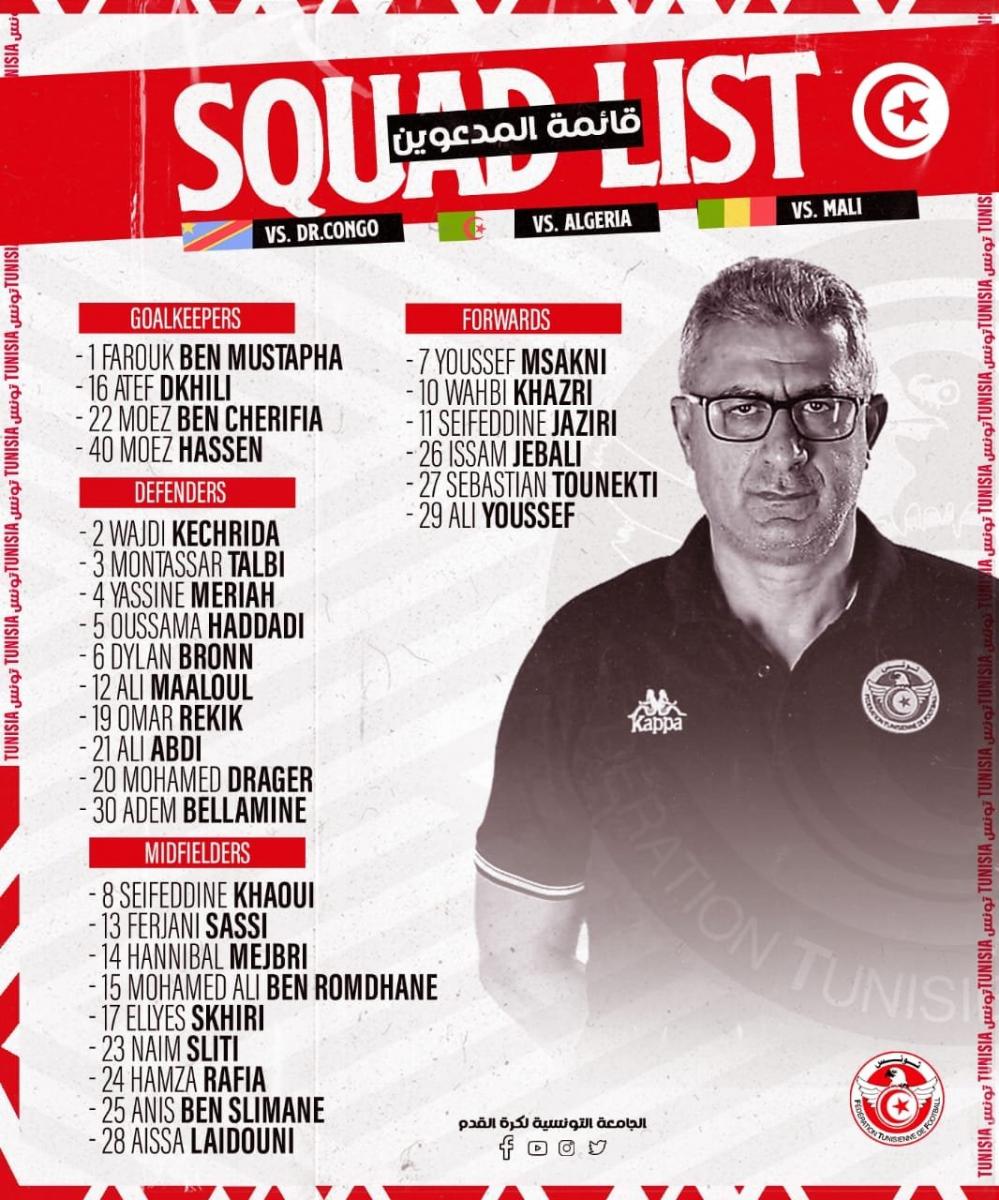 Today's highlight is Riyad Mahrez, a key player for his national team and Manchester City. He was the scorer of the winning goal in his team's last match.
8:34 AMa year ago

Today's highlight is Naïm Sliti, a midfielder who scored the winning goal in his team's last match.
8:29 AMa year ago

It was on date 5 of the group stage of the African Cup of Nations, where they drew 3-3 against Zambia.
8:19 AMa year ago

It was in the international friendly match won by the minimum difference against Congo.
8:14 AMa year ago

How does Algeria arrive?

The Algerian national team is coming off a 1-0 home win over Mali in an international friendly.
8:09 AMa year ago

How does Tunisia arrive?

It is coming off a 1-0 home win over Congo in an international friendly match.
8:04 AMa year ago

The Radès Olympic Stadium is a multi-purpose stadium located in the Radès district of the capital Tunis. It has a capacity of 60,000 spectators, all of them seated, and is the stadium where the Tunisian national team plays its home matches.
7:59 AMa year ago

Hello everybody! Welcome to the broadcast of Tunisia vs Algeria, valid for international friendly.

Houston Dynamo 2-0 Chicago Fire: Getting what you deserve 44 minutes ago
//