THANK YOU SO MUCH

This is the end of our coverage today, thanks for joining us! Stay tuned to VAVEL.com to keep up to date with the world of sports.
12:56 PMa year ago

WOW! JUST WOW! The game ended with a lot of emotions on the last 10 minutes! Raphaël Guerreiro and Cristiano Ronaldo, twice, makes 3-0 for Portugal at the Púskas Arena!
12:51 PMa year ago

IT'S HIM AGAIN! CRISTIANO RONALDO! The number 7 receives the ball, drible Gulácsi and shoots with the left foot! WHAT A PLAYER!
12:46 PMa year ago

IT'S HIM! CRISTIANO RONALDO, LADIES AND GENTLEMAN!
12:41 PMa year ago

Rafa Silva is pushed at the area from Orban. The referee says its penalty!
12:36 PMa year ago

GUERREIROOOOOOOOOOO! After Rafa Silva's cross, Raphaël Guerreiro shooted and the ball dodge in Orbán before entering the goal!
12:31 PMa year ago

Off: Diogo Jota and William Carvalho

Schön entered on the area and shootedon the left corner of Rui Patrício, but the goal was unvalid from offside!
12:21 PMa year ago

In: Sigér and Schön

Cristiano Ronaldo was dominates the ball with the chest, but is  é desarmed from Fiola. The portuguese stiker wanted the foul from the touch on the hand of the hungarian player.
12:11 PMa year ago

WHAT A MATCH FOR THE GOALKEEPER! Bruno Fernandes received on the entry of the area and shooted on the left corner, but Gulácsi saved again!
12:01 PMa year ago

4' SZALAI TRIES FROM THE MIDDLE PITCH

Szalai risks from the middle pitch and Rui Patrício defends witout any problem.
11:51 AMa year ago

Pepe has the first chance on the second half: after the corner, Pepe header on the right corner, but Gulácsi  makes a big defense!
11:46 AMa year ago

START OF THE SECOND HALF

The second half starts in Budapest. For now, Portugal and Hungary ties at 0-0!
11:41 AMa year ago

The first half ended 0-0, but it was a very hot game. Portugal had clear chances with Diogo Jota and Cristiano Ronaldo, but Hungary was very strong at the defensive system.
11:36 AMa year ago

OH MY GOD! Bruno Fernandes recovered the ball near the area and crossed for Cristiano Ronaldo. He gave the kick on the small area, but the ball passed up Gulácsi's goal.
11:31 AMa year ago

Diogo Jota received a ball from Semedo and shooted, but  Gulácsi made a great save.
11:26 AMa year ago

Yellow card for Rúben Dias for a  dangerous foul on Kleinheisler.
11:21 AMa year ago

After the foul, Szalai header from the middle of the area and Rui Patrício defendwithout giving the second ball.
11:16 AMa year ago

Cristiano Ronado receives a ball from Pepe and concludesfor the great defense from Gulácsi. After that, the move was canceled for offside.
11:11 AMa year ago

Diogo Jota won the ball against the defense players and shoots efrom the area entry, but Gulácsi palms the ball to the corner. Cristiano Ronaldo was free and complained a lot with his partner.
11:06 AMa year ago

The ball is running for Hungary vs Portugal!
11:01 AMa year ago

PLAYERS ON THE PITCH

Players are already on the pitch for the national anthems!
10:56 AMa year ago

PORTUGAL IS WARMING UP

Cristiano Ronaldo becomes today the first player to play at five Eurocups. The striker also shares with Michel Platini the most number of goals on the competition. He needs one more goal to be the player with more goals at Euro.
10:46 AMa year ago

THE ONLY STADIUM WITH FULL CAPACITY

Being the only city that the stadium will have full capacity of the Eurocup, Budapest is living the euphoria that reminds of soccer before the pandemic, with thousands of fans around the Puskás Arena. 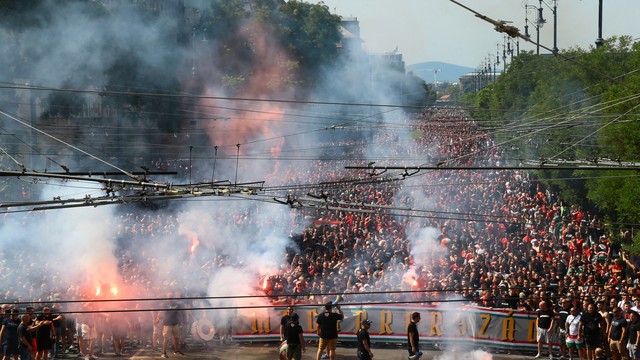 Welcome back to the live updates and commentaries about the game Hungary vs Portugal! The Eurocup game from the Group F is schedule for 12pm ET.
10:26 AMa year ago

Follow the Hungary vs Portugal Live Blog in VAVEL

Do not miss a detail of the match with the live updates and commentaries of VAVEL. Follow along with us all the details, commentaries, analysis and lineups for this Hungary vs Portugal match.
10:21 AMa year ago

How to watch Hungary vs Portugal Live TV and Stream

If you want to watch the game Hungary v Portugal on TV, your options are: ESPN.

If you want to directly stream it: fuboTV

THE OTHER GAME FROM THE GROUP F

Later today, at 15pm ET, Germany and France  will confront each other in Munich.
10:01 AMa year ago

THE ROUTE TO EURO

Portugal qualified for Euro with the  second place on the Group B of the Qualifiers, with five victories, two drawsand one loss. Hungary had to play the playoffsand won against Iceland for 2-1.
9:56 AMa year ago

The Hungary v Portugal match will be played at the Púskás Arena, in Budapest, Hungary. The kick-off is scheduled at 12:00 pm ET.
9:51 AMa year ago

Welcome to VAVEL.com’s LIVE coverage of the 2020 Eurocup Hungary vs Portugal Live!

My name is Beatriz Cruz and I’ll be your host for this game. We will provide you with pre-game analysis, roster updates, and news as it happens live here on VAVEL.

How the Chicago Fire can help Xherdan Shaqiri 15 hours ago