Here's the summary of game
4:02 PMa year ago

Zhang Yuning scores the final third for China to seal the match 3-1
3:54 PMa year ago

Wu Lei scores the second from the penalty spot to put his team back in the lead
3:33 PMa year ago

Double change for China. Jing Jingdao and Wu Xinghan are out, Liu Binbin and Ying Hongbo are in.
3:21 PMa year ago

The complement starts
3:09 PMa year ago

End of the first half, China partially wins by the minimum.
2:45 PMa year ago

A great intervention by Ibrahim Alma saves his team from the first goal. The goalkeeper is treated for a blow on the neck.
2:32 PMa year ago

First yellow card of the match. Kamel Hameesheh gets a caution.
2:31 PMa year ago

Shot! China first warning with a shot on goal that is deflected by the opposing goalkeeper.
2:27 PMa year ago

Syria can't control in midfield, China has been superior in this first half
2:10 PMa year ago

The Republic of China dominates the first few minutes with possession of the ball
2:04 PMa year ago

The ball is rolling in the China vs. Syria duel
1:22 PMa year ago

We are just a few minutes away from the start of the duel between China and Syria, and we will shortly bring you the starting line-up of both teams.
1:07 PMa year ago

Do not miss a detail of the match China vs Syria with the live updates and commentaries of VAVEL. Follow along with us all the details, commentaries, analysis and lineups for this match.
1:02 PMa year ago

How to watch China vs Syria Live Stream on TV and Online?

If you want to watch the game China vs Syria live on TV, your options is:TUDN Univision.

Yang Xu, the Tianjin Quanjian striker has 5 goals in 4 games in this playoffs. 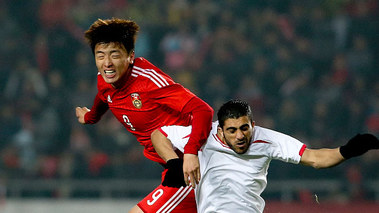 Syria remains top of the group with 7 wins and 21 points. In addition, they have 21 goals scored and only 4 conceded.
12:32 PMa year ago

This match corresponds to the second round of the playoffs, both teams have played 7 matches so far.
12:22 PMa year ago

China and Syria share Group A with Philippines, Maldives and Guam
12:17 PMa year ago

The match will be played at the Sharjah Stadium

The China vs Syria match will be played at the Sharjah stadium , Emiratos Arabes Unidos. The stadium has a capacity of 18,000 people.
12:12 PMa year ago