Thank you for following the broadcast of Spain vs Poland on day 2 of Euro 2020. See you next time.
4:55 PMa year ago

Spain again falls short and now drew with Poland. They will define their ticket in the last match against Slovakia.
4:54 PMa year ago

Rodri is cautioned for cutting off a clear threat.
4:53 PMa year ago

Yellow for Lewandowski.
4:52 PMa year ago

Morata misses in front of Szczesny and then Ferrán finishes it flying.
4:40 PMa year ago

Torres is cautioned.
4:40 PMa year ago

Rodri's shot was shot into the goalkeeper's hands.
4:36 PMa year ago

Torres with the opportune cross in the middle and also negotiates a goal kick.
4:32 PMa year ago

Torres is alone in the area and his shot goes wide.
4:27 PMa year ago

Fabián and Sarabia come in.

Moreno and Koke leave the team.

Frankowski enters and Swidereski comes off.

Morata's cross shot is saved by the goalkeeper and sent to a corner.
4:23 PMa year ago

This is how Morata missed the penalty

Jozwiak is cautioned for a hard tackle.
4:17 PMa year ago

Moreno misses the penalty by hitting the post, and Morata side-foots the counter-attack.
4:16 PMa year ago

The VAR ruled a penalty kick in favor of Spain.
4:15 PMa year ago

A possible penalty kick in favor of Spain is reviewed.
4:13 PMa year ago

Lewandowski with a header against the post to make it 1-1. 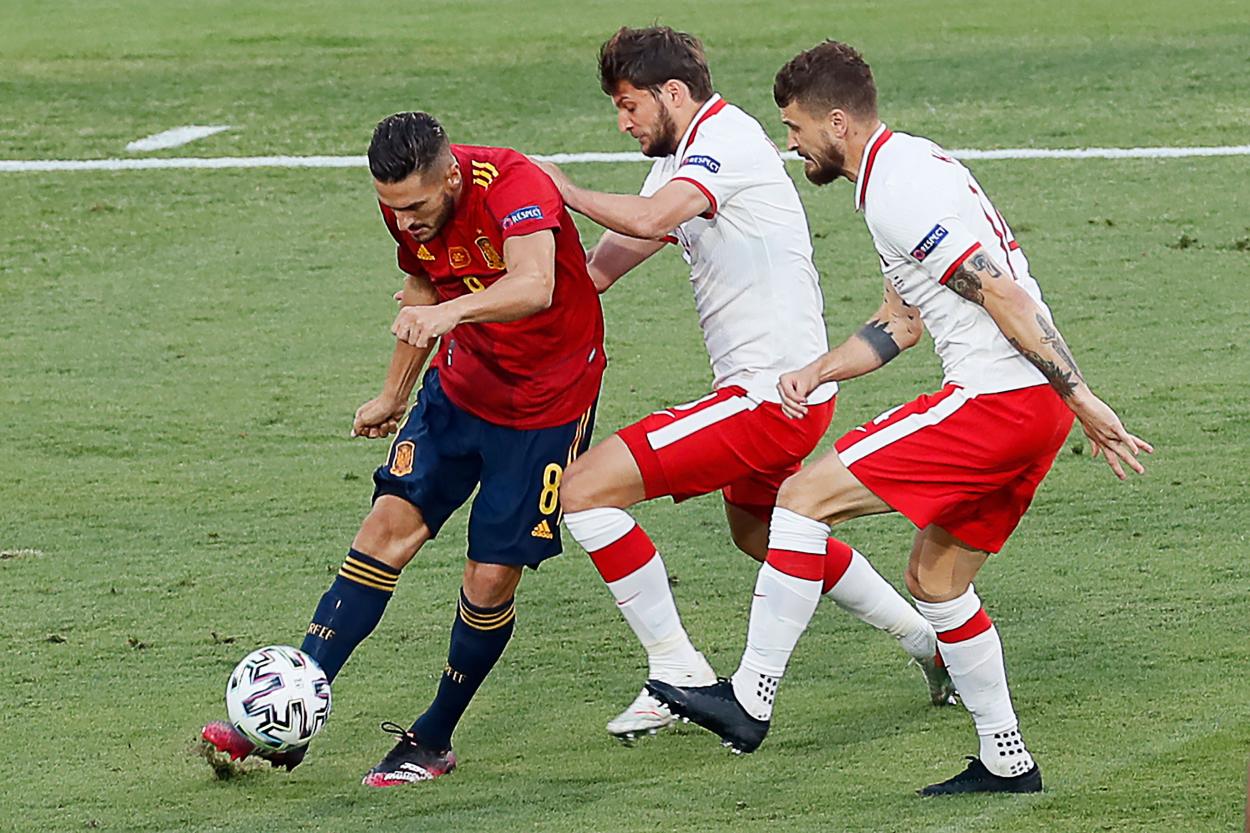 The second half begins.
3:55 PMa year ago

Moreno anticipates the goalkeeper, but the ball hits the net on the outside.
3:40 PMa year ago

A shot hit the post and on the rebound Lewandoswki did not beat the goalkeeper and Poland missed it.
3:35 PMa year ago

Swidereski's shot at the near post goes over Simon's head.
3:30 PMa year ago

Olmo is fouled on the edge of the area and Spain are awarded a direct free kick.
3:20 PMa year ago

After the VAR review, Morata's goal is given as good because there is no offside.

Goal disallowed to Morata for offside.
3:05 PMa year ago

Moreno is the one who tries the most on the flanks, but Spain can't find the goal.
3:00 PMa year ago

Foul in the midfield in favor of Poland.
2:55 PMa year ago

Polish counter-attack that Alba wins the ball and chases away the danger.
2:50 PMa year ago

Moreno's cross was once again cut short and facilitated the defensive work.
2:45 PMa year ago

Llorente with the service to the near post that the defense rejects with some problems.
2:35 PMa year ago

Klich's shot from half distance goes over the top of the goal.
2:30 PMa year ago

Zielinsky falls inside the area but the referee does not sanction anything.
2:25 PMa year ago

The match between Spain and Poland kicks off.
2:20 PMa year ago

Spain and Poland take the field and their national anthems are sung.
2:15 PMa year ago

Poland were left to rue their debut, going down 2-1 to Slovakia with a man down.
2:10 PMa year ago

Spain were forgiven and could not pull out the victory against Sweden as they drew 0-0 in their Euro debut.
2:05 PMa year ago

Living in the countryside

The president of the RFEF accompanies Luis Enrique in the recognition of the field of play in Seville. 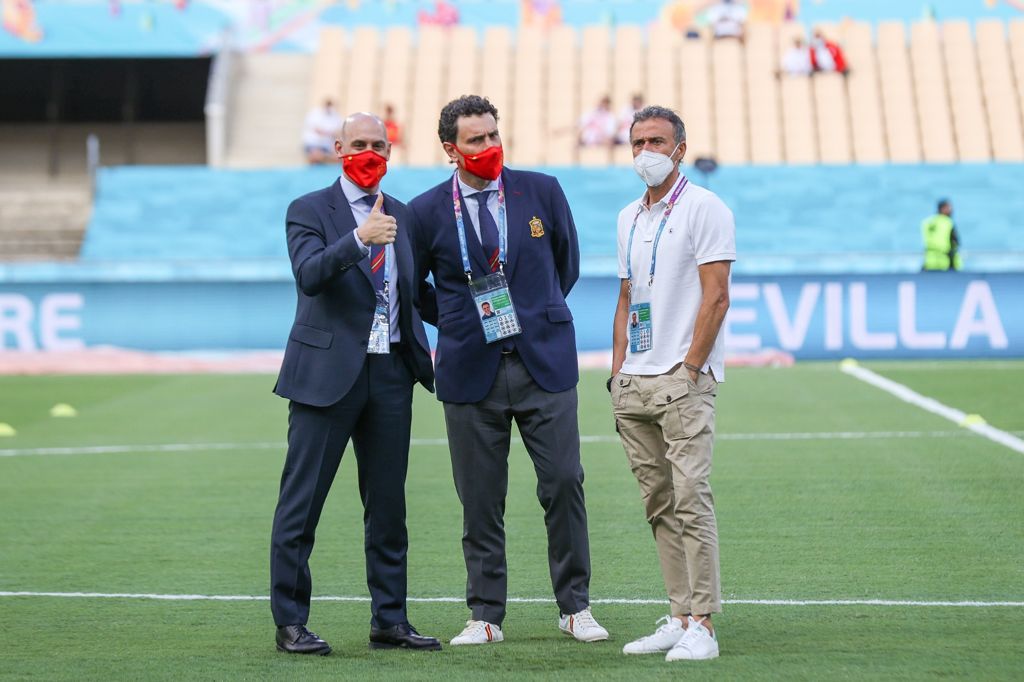 The fans were present once again to support La Roja in search of a good result tonight against Poland. 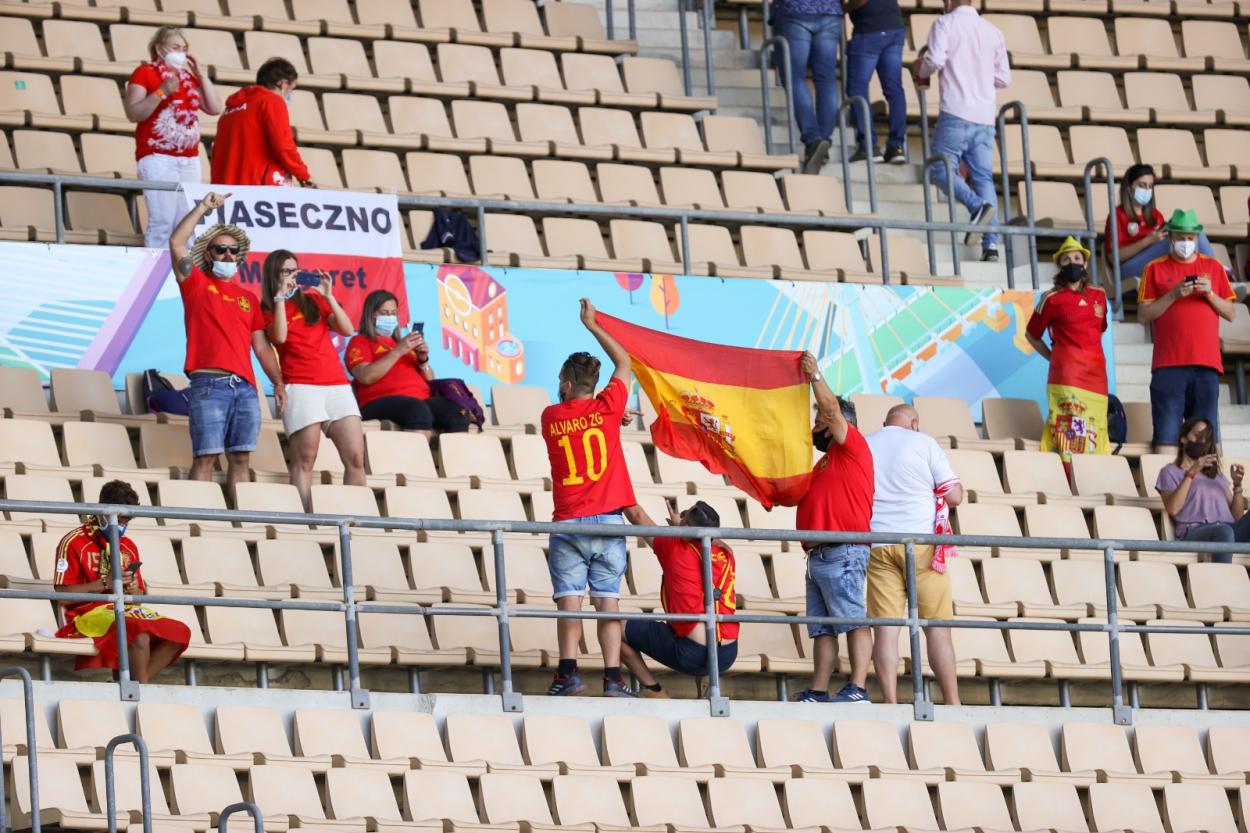 Italian Daniele Orsato will be the referee for the match between Spain and Poland.
1:50 PMa year ago

Once again, the Estadio La Cartuja in Seville will be the venue for Spain's match this Saturday. 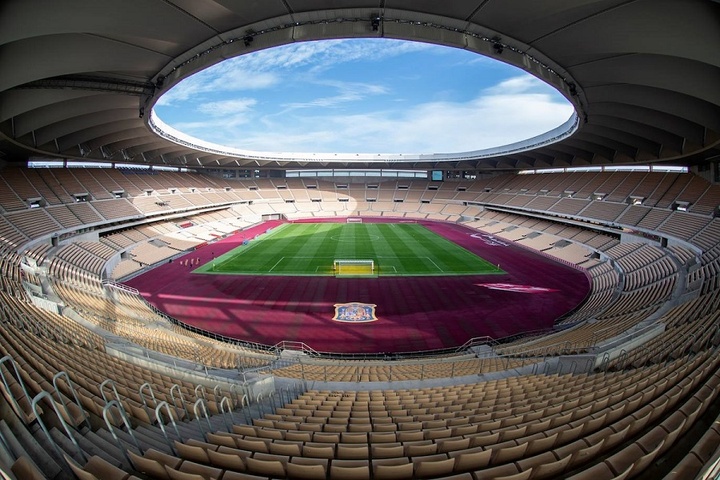 Hungary and France drew 1-1 and then Germany beat Portugal 4-2, so expect the goals to keep coming for Spain vs Poland.
1:30 PMa year ago

Sweden leads the group with 4 points, followed by Slovakia with 3, and at the bottom are Spain with 1 and Poland with no points.
1:25 PMa year ago

Spain has already arrived at the stadium located in Seville with the objective of achieving its first victory in this edition of Euro 2020. 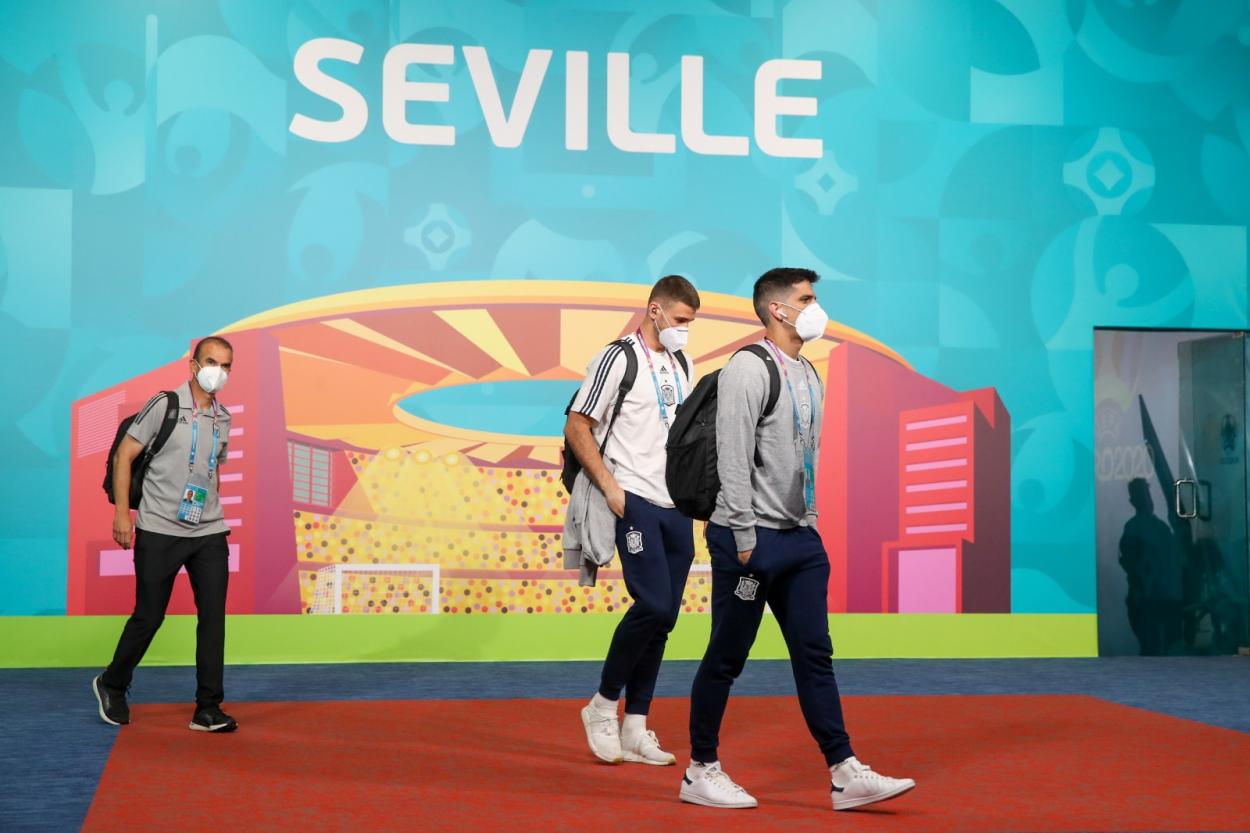 Once again Spain will be in their traditional uniform and watch out for what Barcelona player Pedri can do. 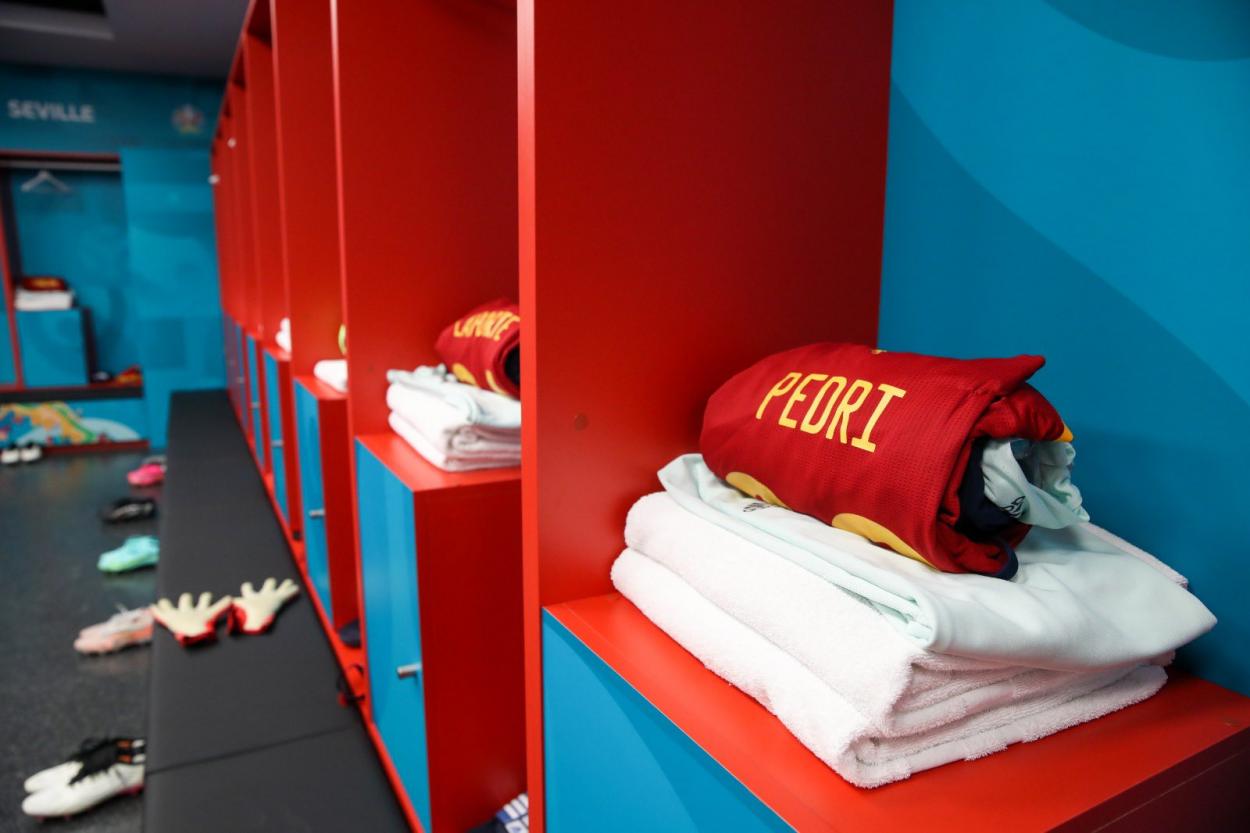 It will not be

Midfielder Grzegorz Krychowiak will be absent after picking up two yellow cards last game that earned him a red card against Slovakia.
1:10 PMa year ago

To be more efficient

With more than 78% of the ball against Sweden, Spain did not find the key to score in the Euro and, in this game, will have to create more options, especially on the wings, if they want to think of any chance of victory.
1:05 PMa year ago

After a bad debut for both, Spain and Poland are looking for their first victory at Euro 2020. We begin with the coverage of the game through VAVEL.com.

Do not miss a detail of the match with the live updates and commentaries of VAVEL. Follow along with us all the details, commentaries, analysis and lineups for this Spain vs Poland match.
12:55 PMa year ago

How to watch Spain vs Poland Live TV and Stream

He did not score in the first game, but you can never lose sight of what Bayern Munich striker Robert Lewandowski can do. 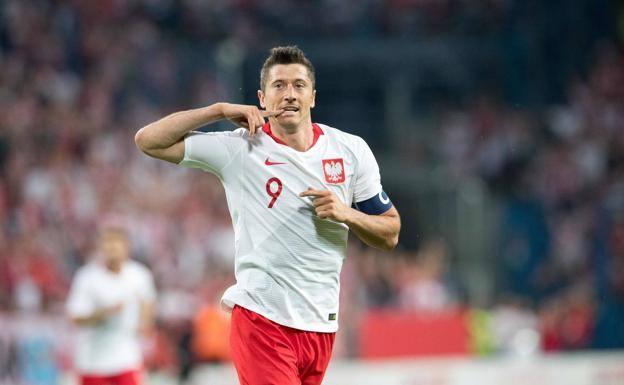 Jordi Alba's depth on the flanks could be one of the factors to watch in case the game becomes tight. 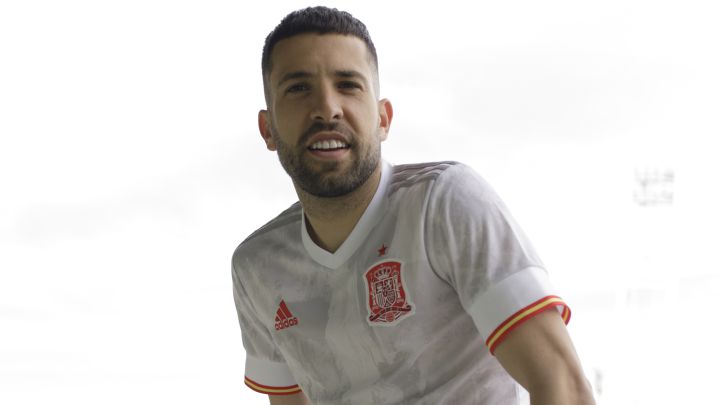 The Poles will have to imitate what Sweden did in the defensive sector and take advantage of counterattacks as their main weapon to generate damage.
12:20 PMa year ago

They had the ball more than 80% against Sweden, but the goal was denied to them by generating few goal actions, which is why they will have to be more unbalanced, especially on the wings, against a team that will come out to defend.
12:15 PMa year ago

The Spain vs Poland match will be played at the La Cartuja Stadium, in Sevilla, Spain. The kick-off is scheduled at 3pm ET.
12:10 PMa year ago

Welcome to VAVEL.com’s LIVE coverage of the 2020 Eurocopa: Spain vs Poland!