This is the end of our coverage today, thanks for joining us! Stay tuned to VAVEL.com to keep up to date with the world of sports.
6:58 PMa month ago

The match between Brazil and Ecuador ended in a 1-1 draw, with both teams qualifying for the quarterfinals.
6:57 PMa month ago

Casemiro strikes the ball, but his shot goes over Ecuador's goal.
6:54 PMa month ago

The Brazilian team holds the ball close to the opponent's area, generating danger to Ecuador's goal.
6:52 PMa month ago

The attacks by Preciado, Mena and Campana on the Brazilian defense generated problems for Tite's team.
6:48 PMa month ago

85' The ball is fought in the middle

Constant struggle of the teams in the midfield to maintain possession of the ball.
6:47 PMa month ago

Pervis Estupiñán is cautioned by Roberto Tobar for a hard tackle on Richarlison.
6:45 PMa month ago

Mario Pineida and Leonardo Campana come in to replace Ayrton Preciado, who is out with exhaustion, and Enner Valencia, who suffered an injury.
6:42 PMa month ago

Mena's shot was blocked by goalkeeper Alisson, who saved his goal from the second goal.
6:40 PMa month ago

The home team finalizes its change windows, with the entry of Everton Ribeiro and Richarlison, replacing Everton and Lucas Paqueta.
6:37 PMa month ago

74' The match is stopped

The match is stopped, as Enner Valencia is lying on the ground.
6:35 PMa month ago

Gonzalo Plata comes in as a replacement for Diego Palacios, to freshen up Ecuador's wing.
6:34 PMa month ago

The Brazilian winger crosses again, but Ecuador's defense clears the danger with speed.
6:32 PMa month ago

Brazil's wingers were in control, creating opportunities with constant crosses in search of the go-ahead goal.
6:30 PMa month ago

Paqueta's cross, which Vinicius fails to hit to add to his score.
6:29 PMa month ago

Mena's cross from the flank is desperately cleared by Brazil's defense.
6:25 PMa month ago

The Ecuadorian team continues to attack, looking for another goal.
6:23 PMa month ago

Angelo Preciado shoots from outside the area, and comes dangerously close.
6:19 PMa month ago

Ecuador touches the ball in the second half.
5:51 PMa month ago

Corner kick for Ecuador, which fails to score.
The referee determines the end of this first half.
5:48 PMa month ago

Three minutes were added to the first half.
The match is stopped, Valencia and Lodi collide and are left lying on the ground.
5:45 PMa month ago

The Ecuadorian team is looking for an equalizer before the end of the first half, and generates high pressure to get closer to Alisson's goal.
5:42 PMa month ago

Everton, Paqueta and Lodi support the attack on the right side of the field.
5:40 PMa month ago

After a foul on the right and a good cross by Everton, Eder Militao scored the first goal of the match, and the player's first in the cup.
5:38 PMa month ago

The visitors' management and high pressure did not allow Brazil to develop their game in a calm manner, as they like to do.
5:34 PMa month ago

The home team keeps the ball, but is unable to advance beyond the midfield, due to Ecuador's pressure.
5:33 PMa month ago

After Brazil's attacks, Ecuador sends long balls to the back of the defense, which generates danger to the rival.
5:30 PMa month ago

Paqueta shoots from the near side of the box, and his ball crashes into the body of an opponent, sending the ball to the corner kick.
5:27 PMa month ago

Ecuador's cross, which creates danger for Brazil's defense, after pressure from Enner Valencia.
5:25 PMa month ago

The Ecuadorian team does not allow Brazil to generate dangerous actions, and forces them to send long balls.
5:21 PMa month ago

The Ecuadorian team generates actions in front of the defense of the locals, and looking for the first goal of the match.
5:19 PMa month ago

Ángel Mena replaces Moises Caicedo, who must leave the field due to the injury he sustained after a collision in a play in the middle of the field.
5:17 PMa month ago

Players such as Paqueta, Barbosa and Everton, generate constant danger with shots from outside the area and crosses from the side.
5:16 PMa month ago

Moises Caicedo lies on the ground again, and is unable to hold himself on the field to continue with the game.
5:13 PMa month ago

Valencia's surprise shot, from the middle of the pitch, falls dangerously into Alisson's goal.
5:11 PMa month ago

9' Strong leg in the middle

The match is stopped due to a strong collision between two players in the middle of the field, causing Caicedo to lie on the ground.
5:09 PMa month ago

Ederson is fouled, generating a dangerous cross into Ecuador's area. The visiting team manages to deny the ball.
5:07 PMa month ago

The Brazilian midfield holds the ball and generates mobility for their forwards with lateral balls, which affect the opposing defense.
5:06 PMa month ago

An attack on the right flank by the visitors ended with a shot from outside the area by the Ecuadorian midfielder, which went wide.
5:04 PMa month ago

The home team maintains control of the ball in the first minute, and seeks to generate danger based on the construction of play from the defense.
5:02 PMa month ago

Brazil starts touching the ball, and the qualification match begins.
5:00 PMa month ago

The captains meet with the center referee, defining the team that will take the kick-off and the starting field. Brazil will start by moving the ball.
4:58 PMa month ago

The national anthems of Brazil and Ecuador are playing in the moments prior to the start of the match between the two teams.
4:56 PMa month ago

The players take the field

The teams are ready to face the match that defines the qualifiers for the quarterfinals of the Copa América, which is being held in Brazil.
4:53 PMa month ago

In Goiania there are favorable climatic conditions for the optimal development of the commitment. The playing field does not suffer variations due to rain, and the game will be able to develop well at ground level.
4:49 PMa month ago

The players, led by the physical trainers and doctors of each of the teams, prepare themselves with warm-up activities in preparation for the match.
4:46 PMa month ago

We now begin our coverage of the Brazil vs Ecuador match.
4:10 PMa month ago

In a few moments we will share with you the starting lineups for Brazil vs Ecuador live, as well as the latest information from the Estadio Olimpico Pedro Ludovico. Stay tuned for up-to-the-minute live online coverage of the match on VAVEL.

How to watch Brazil vs Ecuador Live Stream on TV and Online?

The match will be televised on ESPN, TUDN USA, Univision+. If you want to watch the match live online, VAVEL USA is your best option.
2:38 PMa month ago

"I have full confidence in the heart of these guys. I would love for the 17 million Ecuadorians to experience what these boys are going through, from their pain when they don't get a result to the non-negotiable dedication they have for this shirt; I feel very proud of the squad I manage".

"We are working 100% to be there at the disposal of the coach and the whole group, there is a good vibe, a good atmosphere and I think we are all doing things in the best way to give our best on the field".

"What we talked about with my teammates is that we have the obligation to play a very intelligent game, to plan it in the best way possible to advance to the next round, we are aware of what we have at stake".

"More important than qualifying, is to have a sequence of good games and good results, we are gaining confidence and the players are increasingly looking for an evolution in their performance."

"Ecuador imposed many difficulties on us in the game in which we defeated them 2-0 in the South American qualifiers. They are a strong opponent with speed on the wings, with a good game in the middle, with the experience of Enner Valencia as a midfielder. They are a team that marks and presses very aggressively". 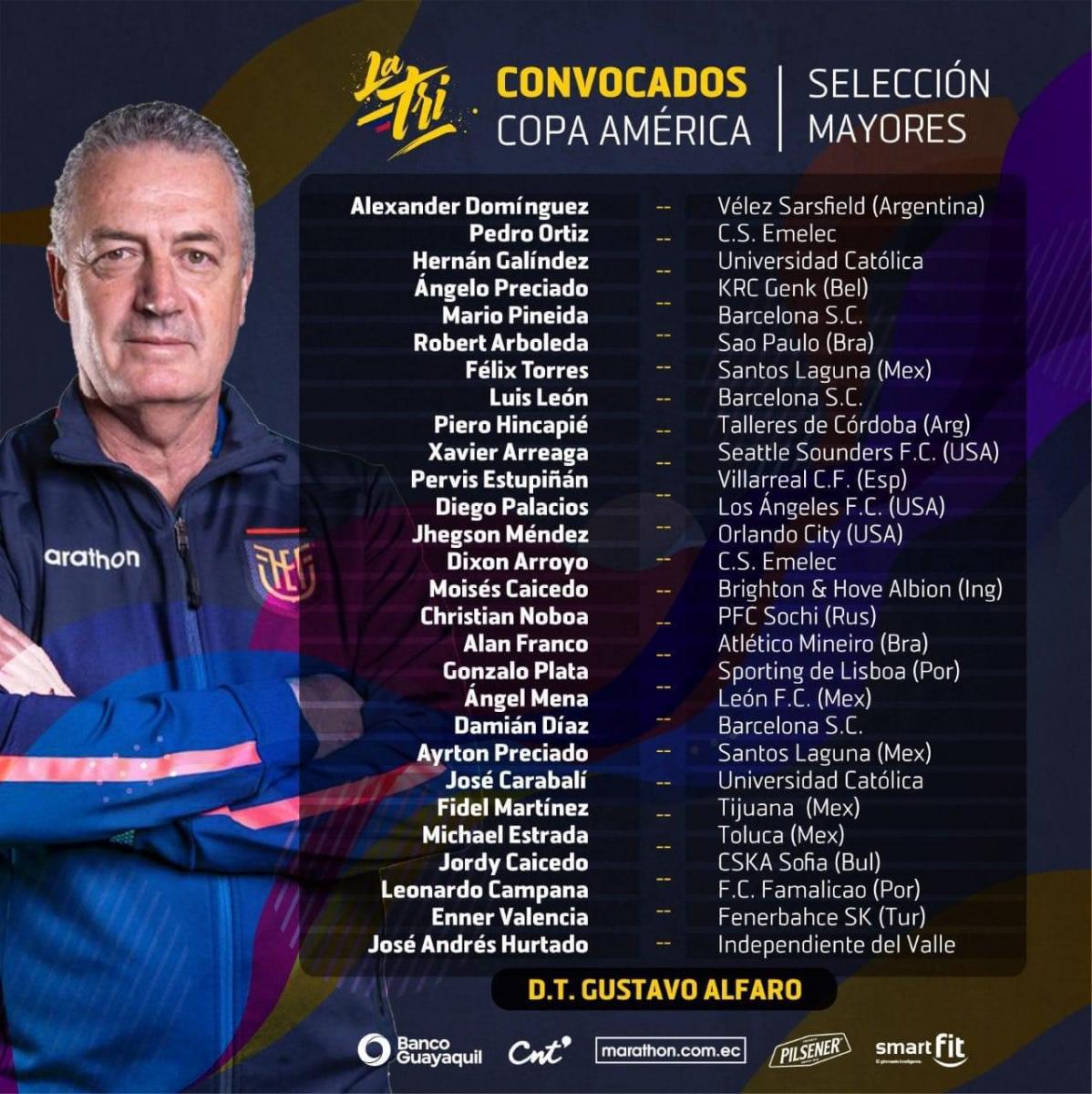 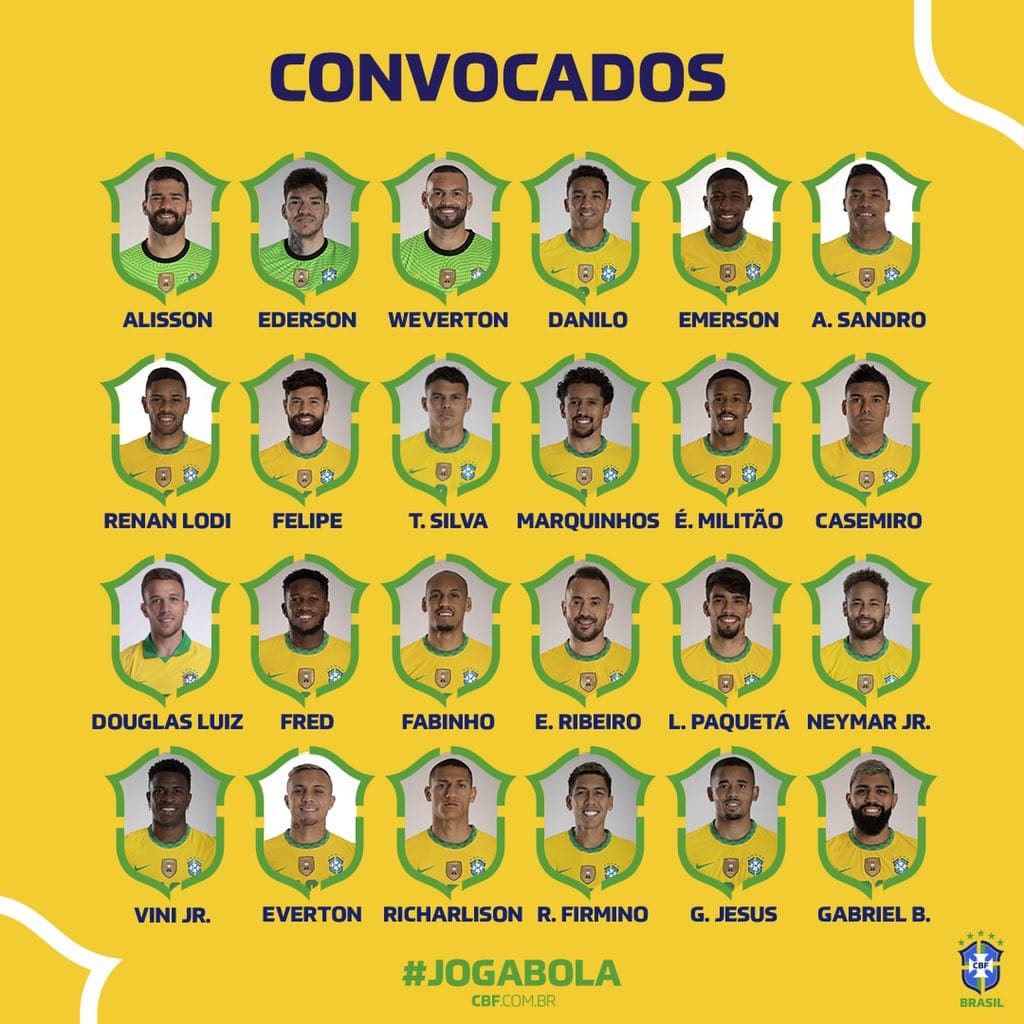 Ayrton Preciado is the player to watch for the Ecuadorian team. He is another of the scorers of the tournament with two goals in three games played.

Neymar is the player called upon to lead the Brazilian squad by a perfect score. The '10' of the home team is one of the top scorers of the competition so far with two goals in three games.

The teams have met 33 times, with 27 wins for Brazil, four draws and two victories for Ecuador.
1:57 PMa month ago

The Ecuadorian team, which is in fourth place in the standings, is coming from its rest day and needs a victory to ensure its qualification to the quarterfinals without depending on other results.

Brazil goes for the perfect score

The local team has just defeated Colombia 2-1 in the fourth matchday and wants to finish the group stage with a perfect score in Group B, to continue its good streak, on the way to the defense of its title.
1:47 PMa month ago

Stadium of Brazil vs Ecuador

The match will be played at the Olympic Stadium Pedro Ludovico, in Goania.
1:42 PMa month ago

My name is Juan Pablo Quintero and I’ll be your host for this game Brazil vs Ecuador live. We will provide you with pre-game analysis, score updates, and news as it happens live here on VAVEL.