Thank you for following the broadcast of the game between Bolivia and Argentina at the close of the group stage of the Copa America. See you next time.
9:54 PMa month ago

Argentina closed its participation in the group stage with 10 points and will now face Ecuador next Saturday in the quarterfinals of the Copa América 2021.
9:53 PMa month ago

It's over, Argentina finishes as group leader by beating Bolivia 4-1, which was not able to get a point in this Copa America.
9:51 PMa month ago

Messi's powerful angled shot, but Lampe saves his goal with his hand and foot to prevent the fifth.
9:50 PMa month ago

Bolivia's free kick is deflected into the wall.

Three more minutes are added to the match.

A foul just outside the area and Acuña is also cautioned for Argentina.
9:45 PMa month ago

First yellow card of the game for Ramallo after elbowing the Argentine defender.
9:44 PMa month ago

Villarroel enters and Saavedra, the scorer of Bolivia's only goal, leaves.
9:43 PMa month ago

The Bolivian defense makes a great cover to reject the ball.
9:36 PMa month ago

Messi's free kick is rebounded by Lampa and then Martinez cannot score the fifth because the goalkeeper reacted just in time.
9:30 PMa month ago

Paredes and Rodríguez are substituted.

Lautaro's double shot inside the box was saved by goalkeeper Lampe, who was the hero to prevent the fifth goal.
9:28 PMa month ago

The goalkeeper blocked the shot, but on the rebound Lautaro Martinez sent it into the back of the net to make it 4-1.

Martinez and Lo Celso are substituted.

Out: Chura, Céspedes and Álvarez

In: Sagredo, Vaca and Ramallo.

Good combination play where Saavedra appears at the first post and with first intention puts the ball in the net to score the goal.

Aguero opens for Messi, but the Barcelona player makes a bad cross and facilitates the work of the goalkeeper.
9:15 PMa month ago

First change for Argentina. It was all for Papu Gómez and Julián Álvarez enters the field.
9:14 PMa month ago

The service was too long and fell into the hands of Lampe, when Aguero had already made the move into the area.
9:10 PMa month ago

Lionel Messi was alone in the one-on-one, but was penalized for offside; however, in the replay it appears that he was in line, although the whistle-blowers cut off the action before.
9:08 PMa month ago 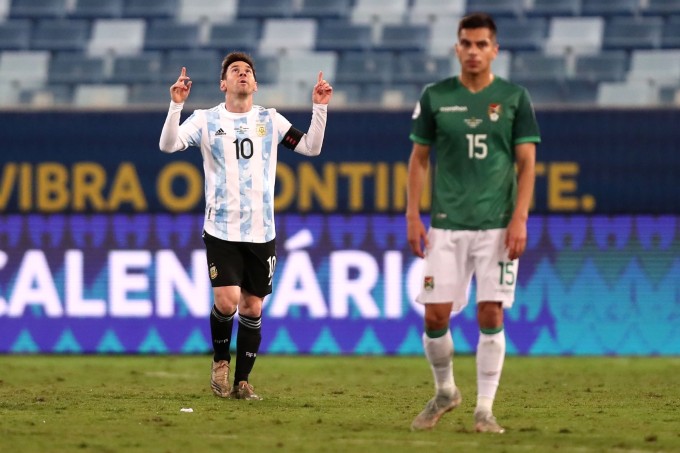 The second half begins with a 3-0 Argentina victory over Bolivia; Uruguay follows with a 1-0 win over Paraguay in the other game.
8:47 PMa month ago

Before the break, Aguero's cross-shot was a bit of a smash that went just wide of the goal.
8:46 PMa month ago

Sergio Aguero missed a clear chance inside the box when he hit a right-footed shot that went wide.
8:43 PMa month ago

A pass that left Messi one-on-one in front of the goalkeeper, where the Pulga scored over the goalkeeper to seal the victory at the Pantanal Arena.

Sergio Aguero's shot was just inside the area, but it was a real sock and the goalkeeper cleared it with ease.
8:36 PMa month ago

A corner kick inside the six-yard box was headed in by Tapia, but Franco Armini had no trouble controlling it in the area.
8:34 PMa month ago

Lionel Messi takes the penalty, deceiving the goalkeeper who thought he was going to shoot down the middle and the Barcelona striker sent it wide to make it 2-0.

The referee awarded a penalty for bringing down Papu Gómez and Argentina could widen the gap.
8:31 PMa month ago

Correa tried to connect with Aguero just outside the box, but the Bolivian defense cut off the dangerous play.
8:29 PMa month ago

Argentina has lowered the intensity of the game, knowing that it is winning and that it is currently assured of first place in the group.
8:24 PMa month ago

In the other game, with a goal by Edinson Cavani, Uruguay is already beating Paraguay by the minimum and is moving up to second place in the group.
8:22 PMa month ago

Controversial play due to the fact that "Papu" Gómez fell inside the area when the ball was not in the way, but the referee did not sanction anything.
8:17 PMa month ago

Messi's long service to Acuña, who fails to reach the ball and the ball goes to the back line.
8:16 PMa month ago

With his start and participation this afternoon, Lionel Messi has surpassed Javier Masherano's 147 appearances and is the player who has worn the Albiceleste jersey the most times.
8:12 PMa month ago

Messi could not make a good control in the area and could not get the shot off, so the defenders stole the ball from him.
8:11 PMa month ago

An elaborate play from their own half that Lionel Messi put in a pass that was pumped and filtered, where there was no offside, and that "Papu" Gomez finished off with a first-time shot for the 1-0.

Lampe's diagonal shot was blocked by Ángel Correa and Lampe was the hero.
8:02 PMa month ago

Messi tries to turn around, but is knocked down in midfield.
8:01 PMa month ago

The game starts at the Pantanal Arena between Bolivia and Argentina. Remembering that Uruguay and Paraguay are playing at the same time to define Group B of the Copa America.
7:55 PMa month ago

Bolivia and Argentina are already on the field and their respective national anthems will be sung prior to the start of the game.
7:50 PMa month ago

After there have been several cases of coronavirus throughout the Copa América, especially with the Venezuelan national team, Bolivia reported that in the latest tests all were negative. 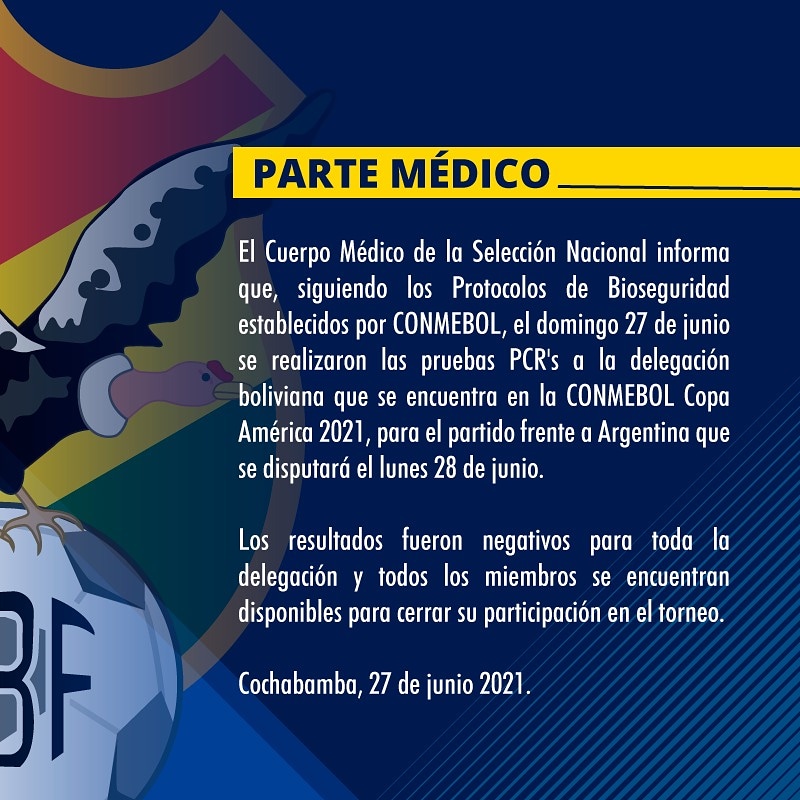 It will be cold

Little by little, winter is beginning to arrive in South America and the Pantanal Arena will be no exception, since when the match starts, the temperature will be around 12 degrees Celsius, different from what had been experienced in the rest of the group stage.
7:40 PMa month ago

They will not be

Lionel Scaloni decided to rest some players for the quarterfinal match to be played on Friday. The elements are: Emiliano Martínez, Manuel Molina, Cristian Romero, Ángel di María and Joaquín Correa.
7:35 PMa month ago

Alternates for Bolivia and Argentina

This is how Argentina arrived

The entire Albiceleste squad arrived at the stadium on time and in compliance with health protocols to face the last match of the group stage of the Copa America 2020. 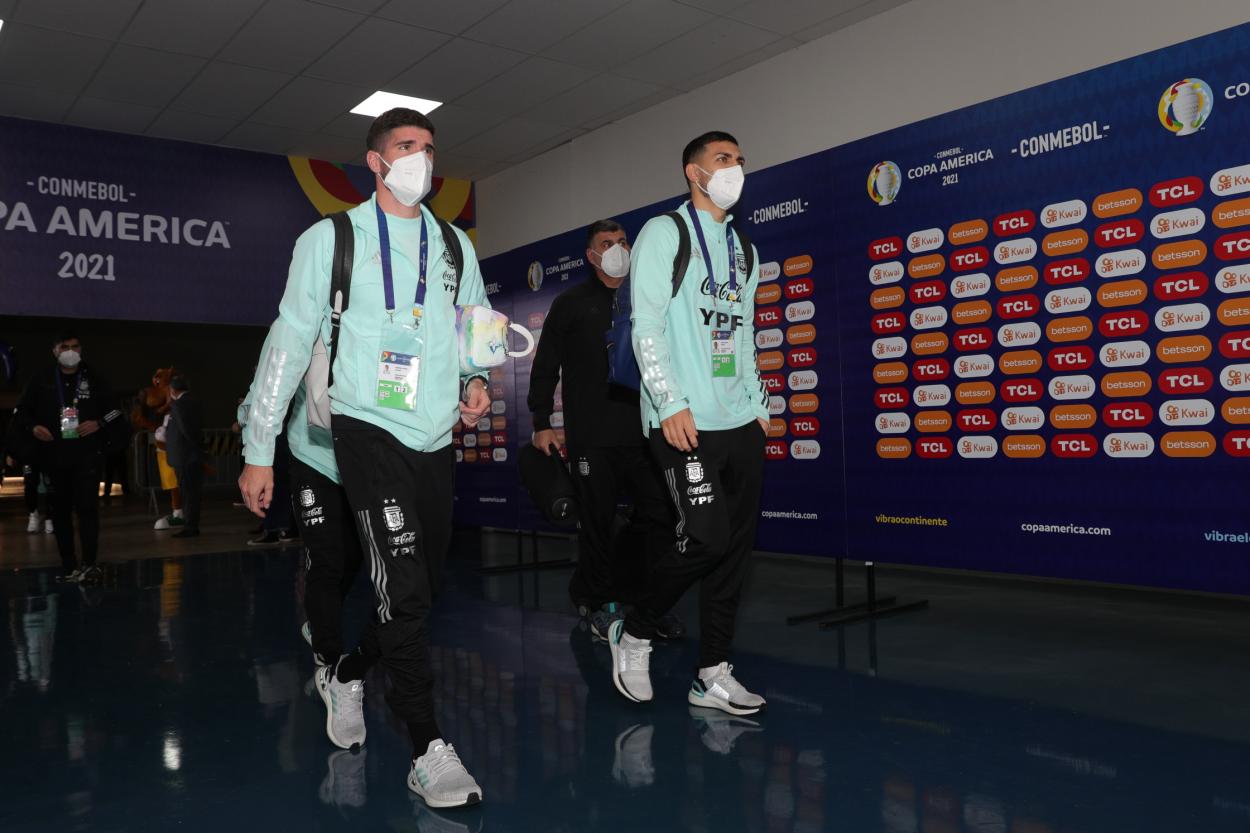 Lionel Messi has had some heated matches against Bolivia and some of them have ended with a few fights that did not escalate. Although it seems an uneven game, the intensity has been lived to the fullest. 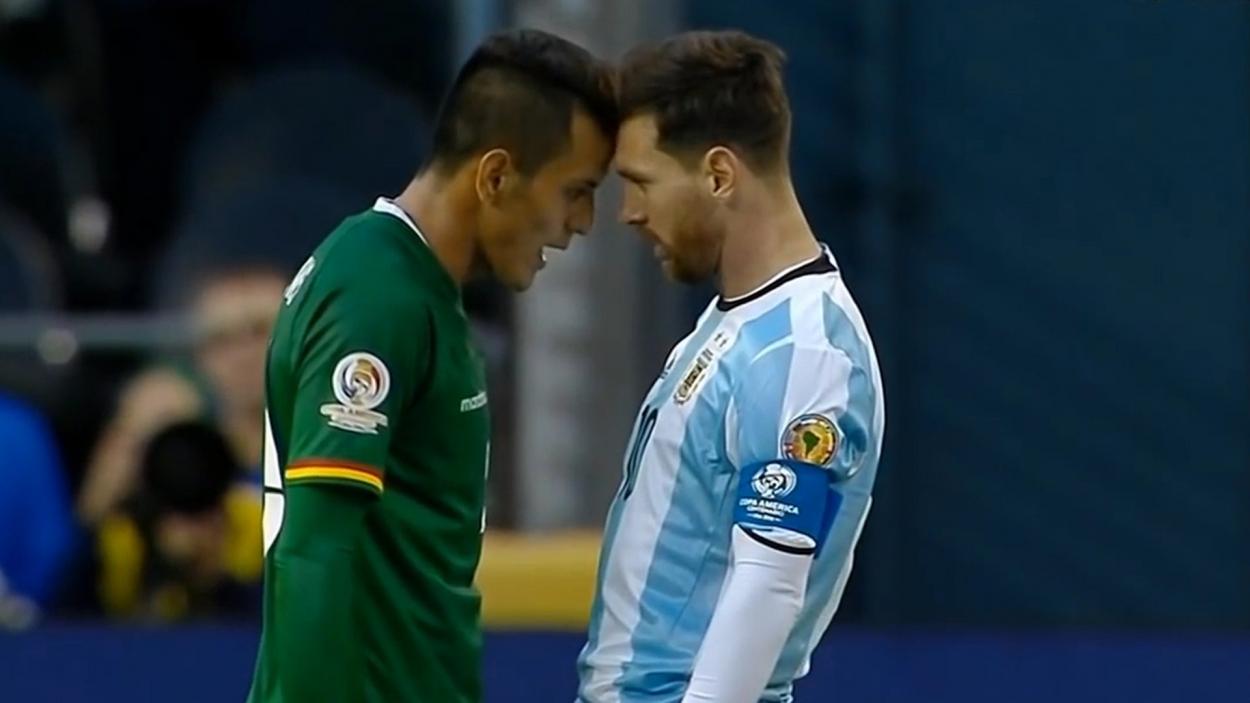 Coach César Farías will also give activity to some players who have not had many minutes during the Copa América 2020:

As announced, Scaloni makes some modifications, although the offensive men will cause problems against Bolivia:

There will be rotation

Lionel Scaloni will make some changes for the last game of the group stage of the Copa América knowing that they have already qualified, although Barcelona players Messi and Aguero will start from the second half to lead the Albiceleste's offense.
7:05 PMa month ago

This Monday will not be an ordinary game for Sergio Kun Aguero, as he will be celebrating his 100th game with the Argentina national team and he will try to celebrate it with a goal, will he succeed?
7:00 PMa month ago

There will be no rest

Despite the fact that Argentina has already qualified, Lionel Messi will not rest and will be active tonight against Bolivia, noting that if Argentina finishes first, it will face Ecuador on the weekend.
6:55 PMa month ago

How is the group?

Argentina is the sector leader with two wins and a draw for a total of seven points, followed by Paraguay with six points after a surprising performance and already qualified; Chile is third with five points, but could lose its place; Uruguay is fourth with four points but already qualified; and Bolivia has nothing to fight for as it has no points.
6:50 PMa month ago

With Bolivia already eliminated, Argentina will be looking to avoid depending on the other match and secure first place in the group with an undefeated run at the Copa América 2020. We begin with the coverage through VAVEL.com.
6:45 PMa month ago

Do not miss a detail of the match Argentina-Bolivia with the live updates and commentaries of VAVEL. Follow along with us all the details, commentaries, analysis and lineups for this Bolivia-Argentina match.
6:40 PMa month ago

What time is Bolivia vs Argentina match for 2020 Copa America?

This is the start time of the game Argentina vs Bolivia of 28th June 2021 in several countries:

Since 2015, they have faced each other on six occasions, with the Albiceleste holding the upper hand with five victories and only one defeat. That setback occurred on March 28, 2017 in the South American qualifiers when they succumbed 2-0.
6:30 PMa month ago

Much is said about what Lionel Messi can do, however, what Alejandro "Papu" Gómez has done in this group stage has been extraordinary, remembering that he gave the assist with which they defeated Paraguay by the minimum a week ago. 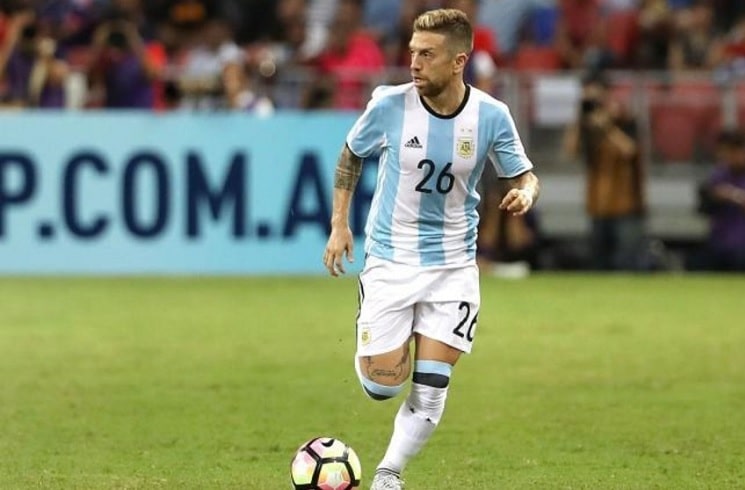 Although he has conceded many goals, the performance of goalkeeper Carlos Lampe, who plays in the local league with Always Already, has been outstanding as, in the game against Uruguay, he prevented his goal from being scored despite the defeat. 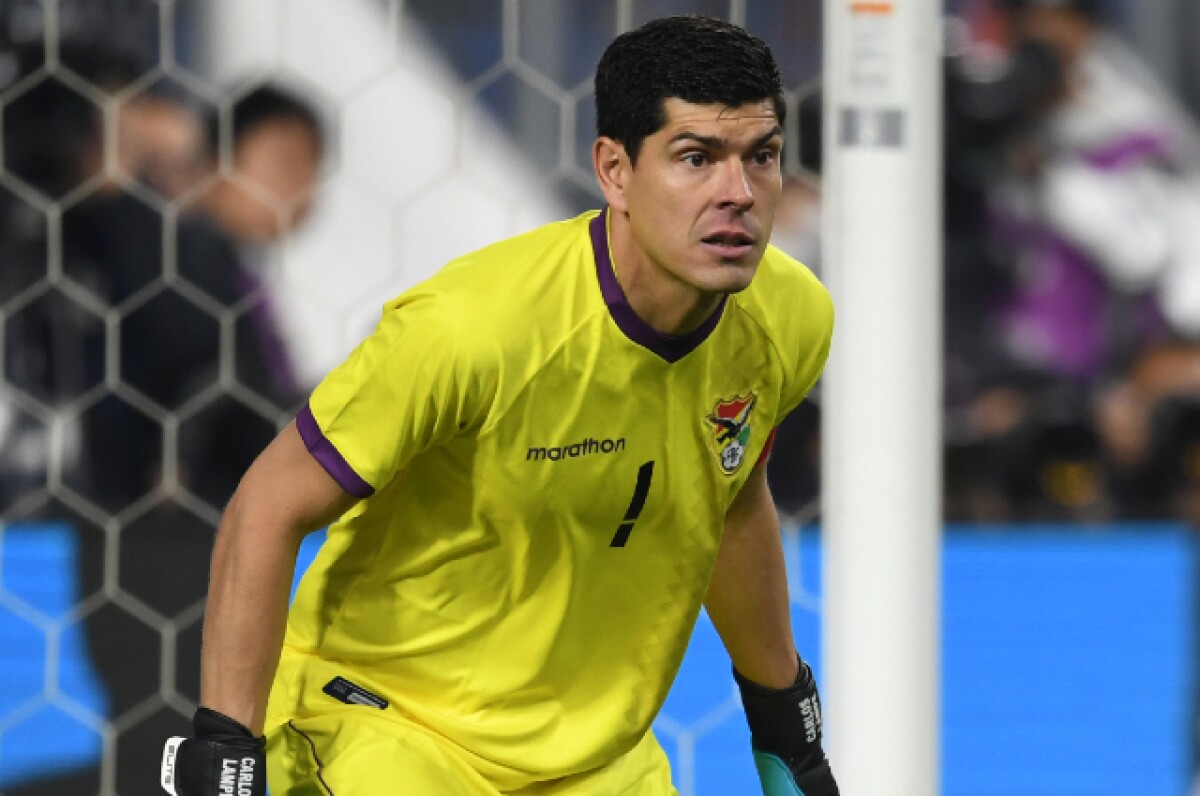 This was Argentina's line-up for the match against Paraguay.

This was Bolivia's lineup in the match against Uruguay.

Argentina: not to be overconfident

Argentina needs to get the victory to avoid having to depend on the game between Uruguay and Paraguay and thus qualify as first in the group and, although it seems to have the table served to get the three points, it will have to be careful with overconfidence.
6:05 PMa month ago

Although the Copa América was used as a training ground for many young players thinking about the future, Bolivia has been the worst team in the Copa América and with no chance of qualifying to the next round, they will be looking to leave with dignity with a victory against the Albiceleste.
6:00 PMa month ago

The Bolivia-Argentina match will be played at the Arena Pantanal Stadium, in Cuiaba, Brazil. The kick-off is scheduled at 8pm ET.
5:55 PMa month ago

Welcome to VAVEL.com’s LIVE coverage of the 2020 Copa America: Bolivia-Argentina!

Seattle vs Sporting Kansas City preview: How to watch, team news, predicted lineups and ones to watch 18 hours ago

Inter Miami vs Philadelphia preview: How to watch, team news, predicted lineups and ones to watch 16 hours ago

NYCFC vs Orlando City preview: How to watch, team news, predicted lineups and ones to watch a day ago
//