It's over!!! Mexico scores in its last match before the start of the Gold Cup.
1:01 AMa year ago

Great play by Mexico that culminated in a very sloppy shot by Gallardo.
12:56 AMa year ago

Iwala's cross, but it finds no one in the area. Nigeria keeps trying, but fails to get a shot on Talavera's goal.
12:50 AMa year ago

Lozano cannot pass between four and the Nigerians end up taking the ball away from him.
12:47 AMa year ago

Goal, goal for Mexico! Jonathan Dos Santos gets in with a blast, and Bobo can't do anything about it.
12:42 AMa year ago

Good intervention by Olisa against the arrival of Rodriguez.
12:39 AMa year ago

Sunusi tries to shoot at goal, but the defense deflects the ball and misses the opportunity.
12:37 AMa year ago

Uff Nigeria is looking for the first one! Iwala broke free and sent in a great cross, but Talavera makes a two-timed save.
12:31 AMa year ago

Excellent service looking for Funes Mori, but the Nigerian defense anticipates and the ball ends up in Bobo.
12:27 AMa year ago

Change from Nigeria. Jude and Adejunti replace Mayi and Atshimene.
12:21 AMa year ago

Goal, goal, goal for Mexico! The third goal came from Herrera, who took advantage of a rebound by Bobo after Lozano's shot and scored one more.
12:18 AMa year ago

Bobo! Chucky's shot from outside the area, and the attentive goalkeeper dives and clears the ball.
12:15 AMa year ago

The complement starts in Los Angeles, California.
11:55 PMa year ago

End of the first part! With a goal in the locker room, Mexico wins it two to zero
11:50 PMa year ago

Again Iwala appears inside the box, but Iwala slips just before shooting and Sepulveda ends up taking the ball away from him.
11:47 PMa year ago

Lozano's excellent pass to Funes Mori, who shoots, but the ball ends up going over the goal.
11:46 PMa year ago

The most dangerous! Iwala entered the area and after settling in, he sent in a cross, but the defense had already arrived and ended up clearing the ball.
11:44 PMa year ago

Uff! A shot by the Mexican saga, but Shimaga, attentive, deflects the ball and it ends up in Bobo's hands.
11:41 PMa year ago

Olusesi's cross, but the Mexican defense is attentive, preventing the danger from growing.
11:39 PMa year ago

Mexico looks for the second! Great shot by 'Chucky' Lozano, but the ball goes wide.
11:38 PMa year ago

Goalkeeper! Lozano's shot that Bobo ends up saving after he leans back and rejects the ball.
11:35 PMa year ago

Lozano's cross to Corona, but the latter does not connect correctly and sends the ball wide.
11:32 PMa year ago

Udo's shot into Mexico's box, but Talavera, attentive, keeps the ball without any problems.
11:24 PMa year ago

Lozano, who had already made a good gain, was played through, but Bobo came out correctly and anticipated Hirving's shot.
11:22 PMa year ago

Nothing for the third! Adekunle sweeps in and the ball is just inside the box, but another defender comes up and clears the ball out.
11:21 PMa year ago

The ball escapes after an attempt by Salcedo to make contact with the ball, which ends up going wide.
11:14 PMa year ago

Goal, goal, goal for Mexico! On a counterattack, Tecate sends the ball to 'Chucky' Lozano, who doesn't hit the ball well, but ends up serving Funes Mori, who makes his debut with the TRI jersey.
11:11 PMa year ago

Goal by Mexico! After a corner kick, Herrera appears only to push the ball and Bobo can't do anything.
11:08 PMa year ago

Mexico will be looking for one more victory to close its preparation in a good way.
11:07 PMa year ago

Prior to the match, the Aztec national team, led by Herrera, asks the fans to show their support by respecting and avoiding shouting.
11:01 PMa year ago

Both teams take the field for the national anthem of their countries.
11:00 PMa year ago 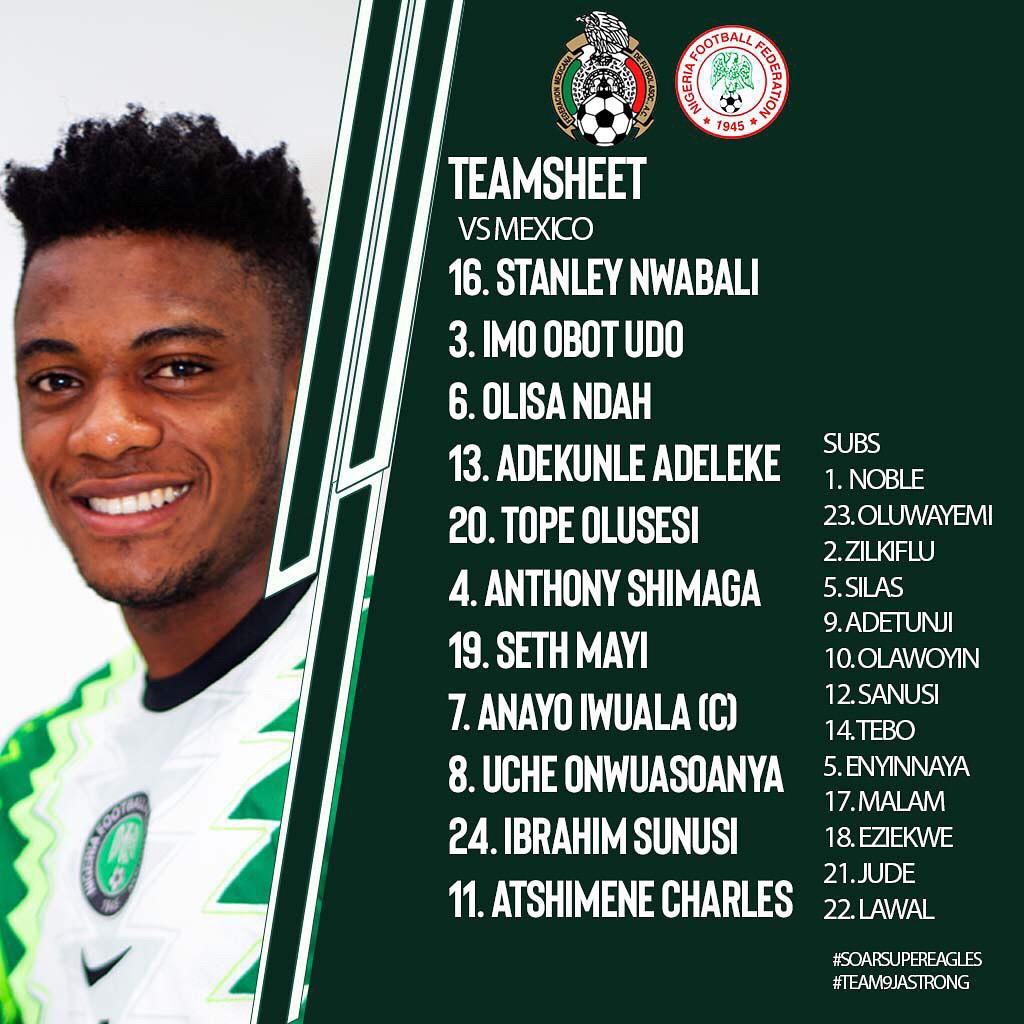 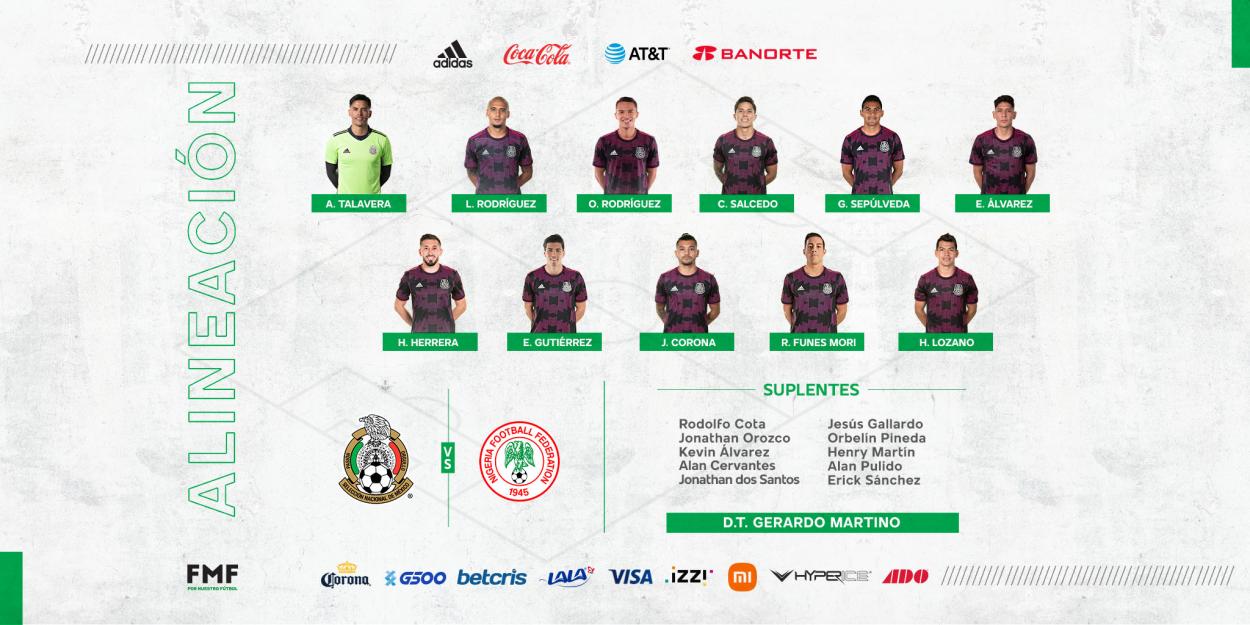 Problem for the 'Tata'

Tonight, Martino will be without Moreno and Araujo. Araujo and Moreno are reportedly not out due to injuries, as they have been training normally.
10:36 PMa year ago

The fans are here!

All Mexico and Nigeria fans are already present at the stadium, where tonight Mexico closes its preparation for the 2021 Gold Cup.
10:31 PMa year ago

Tonight, Funes Mori, a newly naturalized Mexican citizen, will make his debut for the TRI. The striker will have to prove the reasons why Martino called him up to the Mexican national team.
10:25 PMa year ago

Both teams are already warming up before kick-off, getting ready to give their best for this match.
10:20 PMa year ago

There is a goalkeeper!

Yesterday, 'Tata' Martino announced that his goalkeeper for this Copa will be Alfredo Talavera.
10:15 PMa year ago

The Mexican National Team is about to play its last preparation match for the Gold Cup, and for this match they will be wearing their new kit. 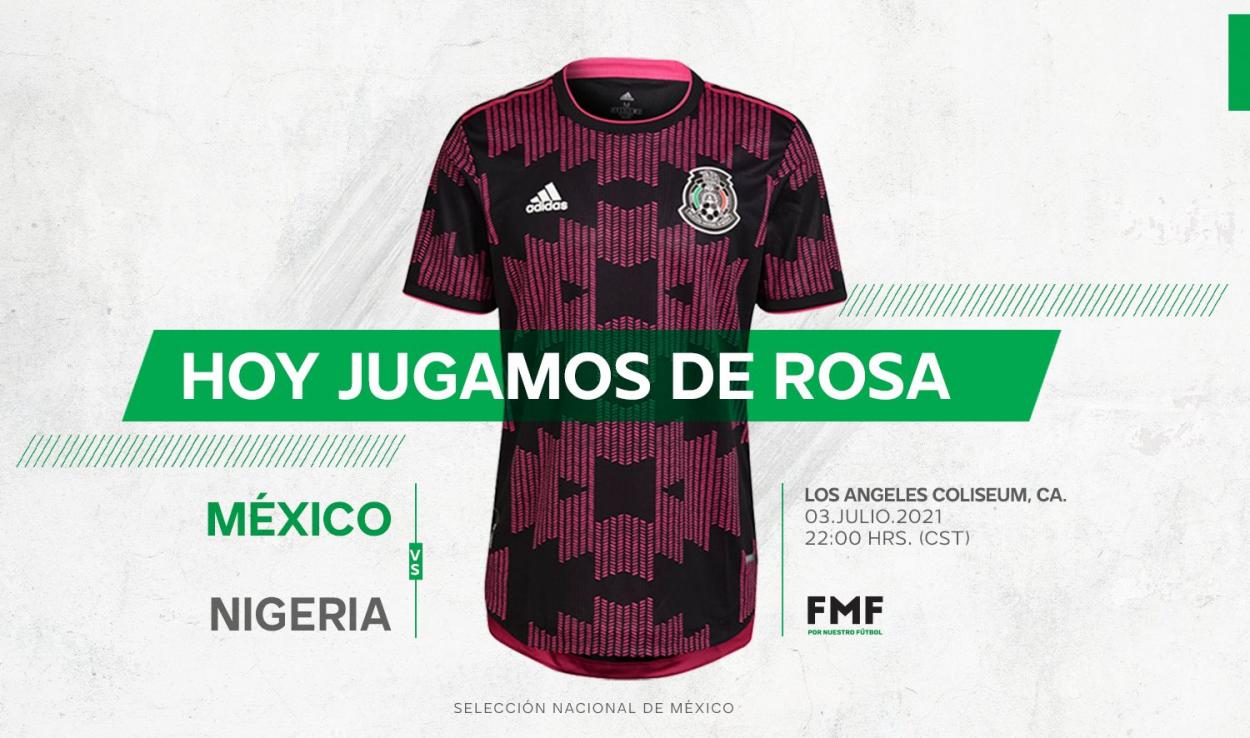 Don´t move over VAVEL US. In a few moments we will provide you the lineups and all the details that happened on this game. Do not miss a detail of the match Mexico-Nigeria live updates and commentaries of VAVEL.
10:05 PMa year ago

How to watch Mexico - Nigeria Live Stream on TV and Online?

If you want to watch the game Mexico - Nigeria live on TV, your options is: TUDN.

Prior to this duel, Gerardo Martino also touched on the subject of injuries that have affected the participation of some players: "In reality, the group in general has not been affected, obviously the players who are suffering from injuries or discomfort are taken into account, they are taken care of, they are treated, they undergo tests, but in general everything is going the same way. On the other hand, I think it is quite common all over the world, taking into account that for more than a year we have been playing and training irregularly and it is happening in all the competitions that we have to watch at this time, such as the Copa América and the European Championship".
9:55 PMa year ago

It is important to remember that Mexico's participation in future competitions could be at risk after Mexican fans continue to fail to understand that they should avoid the homophobic shouting that has led the national team to economic sanctions and has already led to two bans in official competitions.

This morning, the Federation stated that it is not yet known in which matches these sanctions will be applied, nor in which category.

The absentees who will be playing in the Olympic Games are not the only ones the Mexican National Team will be counting on for the Gold Cup. Rodolfo Pizarro and Andrés Guardado are two significant players that 'Tata' will not be counting on for this tournament; both are out of the call-up list due to injury. Efraín Álvarez and Erick Sánchez will take the places of these Mexicans, respectively.
9:45 PMa year ago

Martino also touched on the issue of other teams not going to this tournament with their best players: "In 2019 other selections were complete, we were not and the obligation to win we had in the same way, that is, the obligation has been placed by the world of soccer, journalists and this on the backs of Mexico since always, what other selections do is not a reason for opinion on my part, I only have to tell them that we have to put together two selections because we participate in the Gold Cup and the Olympic Games, then the decisions are according to the analysis made by their coaching staff."
9:40 PMa year ago

For the Nigerians, it is of vital importance to have Ibrahim Sunusi, a winger currently playing for CF Montreal. The winger just arrived yesterday at the team's training camp in Los Angeles, ready to line up for the match against Mexico.
9:35 PMa year ago

They're off to the Olympic TRI!

Mexico begins its journey to the Gold Cup with three important absentees. They are Luis Romo, Henry Martín and Memo Ochoa in goal. These players were chosen by Jaime Lozano to represent the country at the Olympic Games in Tokyo; it should be remembered that Martino said that the priority was for this event.
9:30 PMa year ago

After Funes Mori's call-up and leaving out Santiago Ormeño, who ended up representing Peru in Copa América, Gerardo Martino stated in a conference: "When a player makes a decision in this way, it involves many people, especially his family, and he does it convinced that it is not only a soccer decision but also a life decision, it is clear that in this situation the player will try to take advantage of one of the opportunities he may have. I do not understand soccer as a matter of life or death, but I do understand that it is a very important decision that the player has taken, which will determine what he can be from now on".
9:25 PMa year ago

Nigeria is on a good run

The Nigerians recently played in the 2019 Africa Cup of Nations, where they finished in third place. Nigeria ended up losing to Algeria in the semifinals of that Cup and beat Tunisia, taking third place. This is the last match to be played before the start of the Gold Cup, where Mexico will be looking for the second championship. 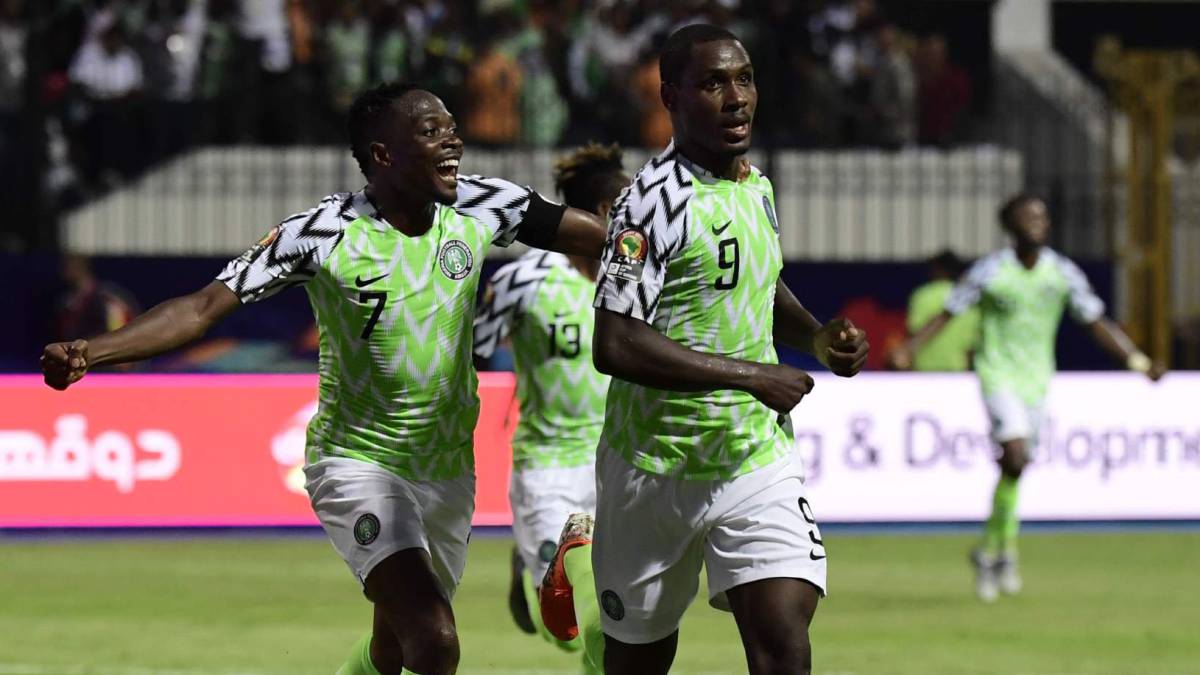 Mexico on the rise

After the defeat, where the Mexicans lost the Nations League Cup against the United States, the team coached by Martino tied against Honduras without goals. They also played this Thursday against Panama, where they ended up winning by three goals to zero. 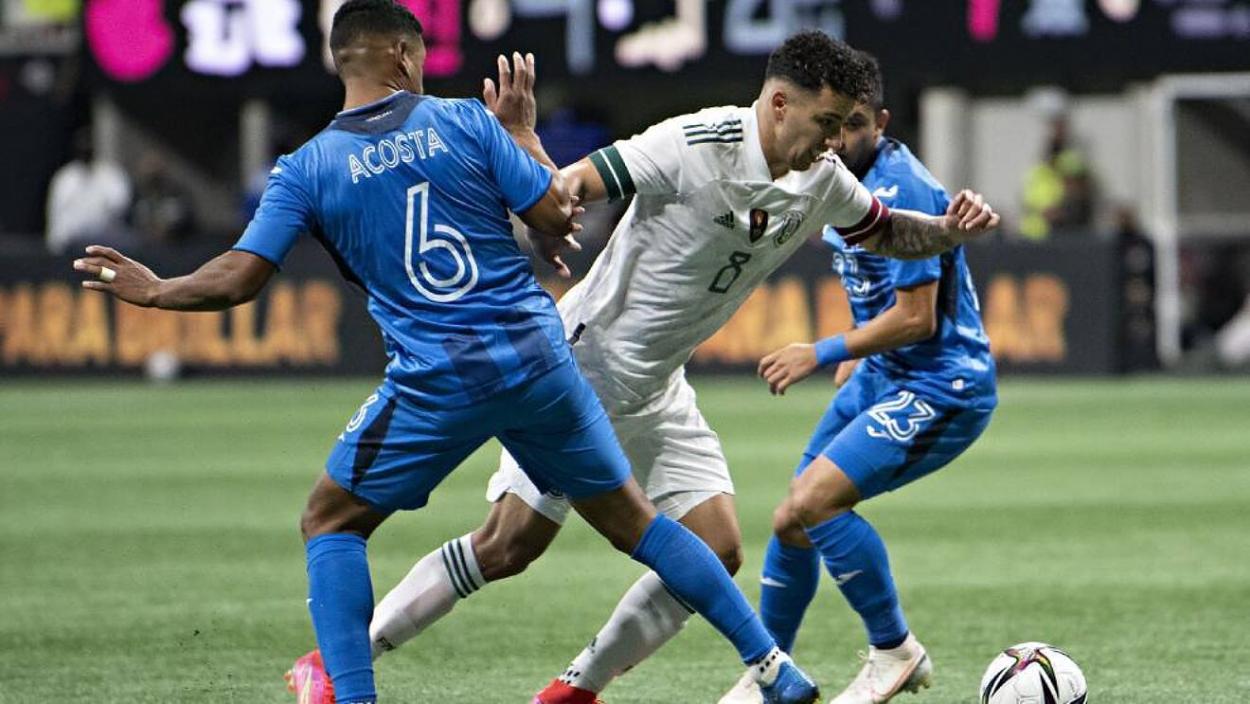 My name is Lore Solórzano and I’ll be your host for this game. We will provide you with pre-game analysis, score updates, and news as it happens live here on VAVEL. Stay tuned up.