With Brazil's victory, now we only have to wait for their opponent, it could be Argentina or Colombia. We thank you for your attention and invite you to stay tuned to all VAVEL.com coverage.
9:04 PMa month ago

BRAZIL IS THE FIRST FINALIST OF THE AMERICAS CUP.

TITE'S TEAM BEAT PERU 1-0 IN AN EASY GAME FOR THEM IN THE FIRST HALF, BUT COMPLICATED IN THE SECOND HALF.

Brazil attacks on the left with Vinicius Jr. Peru defends without order because its players are looking for an equalizer.
8:53 PMa month ago

With less than five minutes to go, Peru pushed forward more and more, knowing that there was not much time left, and played on the wings.
8:46 PMa month ago

Out: Richarlison, Fred and Renan Lodi

Alexander Callens had a chance to equalize thanks to a cross from the wing, but was unlucky with a header.
8:40 PMa month ago

Fred finds a partner in Richarlison, opens the field to the left and Renan Lodi sends an easy cross for Gallese to keep the ball.
8:37 PMa month ago

Peru looks for the equalizer with aerial play but fails to score. Goalkeeper Ederson keeps the ball.
8:31 PMa month ago

Santamaría fouls Neymar. Brazil tries to regain control of the game while time is running out for Peru.
8:26 PMa month ago

Gianluca Lapadula is everyone's partner in Peru, thanks to him his team finds an elaborated game. Unfortunately, they were ineffective in the last sector of the field.
8:21 PMa month ago

GARCÍA SHOT FROM OUTSIDE THE BOX AND ALMOST BEAT THE BRAZILIAN GOALKEEPER AND LAPADULA SCORED THE FIRST FOR PERU, THE PERUVIANS ARE GETTING CLOSER.
8:19 PMa month ago

Lucas Paquetá commits a foul in the middle of the field and Peru has a privileged opportunity to equalize.
8:17 PMa month ago

Yotún is Peru's first caution of the game
8:16 PMa month ago

Peru plays more in the middle of the field and dares to come out of the back looking for a higher pressure. The first minutes of the second half are for Peru
8:12 PMa month ago

Peru opens the field, thanks to Raziel Garcia's hooking, manages to shoot at the Brazilian goal without success.
8:11 PMa month ago

Lapadula dared to look for the equalizer for Peru, unfortunately for him he did not achieve the goal. Peru knows there is no tomorrow
8:09 PMa month ago

In: Miguel Trauco and Christian Ramos

Out: Raziel García and Marcos López

Brazil will be out to ratify its victory and reach the final, while Peru will be looking for the feat.
8:05 PMa month ago

With much superiority, Brazil takes a one-goal lead into the locker room. For now, the finalist is the local team
7:51 PMa month ago

Peru's defensive errors allowed Brazil to reach the goal with ease. Unfortunately for the locals, Richarlison missed an important play after sending a header wide.
7:48 PMa month ago

Brazil plays with more security, without wearing themselves out. Peru tries to reach the opponent's goal without much order.
7:46 PMa month ago

Peru could not find a way to counter Brazil's defensive play. They try on the right flank without success after a breakaway by Cueva.
7:39 PMa month ago

After an impressive individual action by Brazil, Lucas Paqueta received the ball in front of goal and scored the first goal of the match.

Richarlison tries on the left flank, but the Peruvian defense does not allow him to get a clean shot off.
7:32 PMa month ago

The great figure of the match in the first thirty minutes was Peru's goalkeeper, Pedro Gallese.

In Brazil, Casemiro is one of the most outstanding players recovering the ball.

Peru tries to play long but is unable to do so due to Brazil's pressure. Tite's team keeps a high pressure.
7:26 PMa month ago

YOU CAN'T BELIEVE IT! Brazil had a clear opportunity with Richarlison, Gallese came out wrong to block the space and the locals missed the first goal of the match.
7:24 PMa month ago

The opportunity was wasted, for now the ball and the most important options belong to Brazil, but the score remains tied.
7:23 PMa month ago

Peru has an important opportunity with set pieces
7:20 PMa month ago

The Peruvian goalkeeper did not allow Brazil's first goal after a shot by Neymar JR.
7:13 PMa month ago

Pedro Gallese holds back a dangerous ball thrown by Casemiro
7:12 PMa month ago

For now, possession of the ball belongs to Brazil, with open play on the flanks, the home team tries to score a goal. Peru defends with a line of five players in defense.
7:09 PMa month ago

Everton had the first goal of the match, but unfortunately for Brazil, the ball went wide.
7:05 PMa month ago

After a Brazilian possession of the ball without much depth, Peru tries to steal the ball in the middle of the field to attack its rival. Both teams go all out.
7:00 PMa month ago

Brazil vs. Peru is already in play, both teams for a place in the final of the Copa America 2020
6:58 PMa month ago

The anthems are playing and the players are getting ready!

In a few minutes the match will start

Peru and Brazil, two old acquaintances in this Copa América

After sharing group B, the two teams meet again. On day two of the group stage, Brazil defeated Peru 4-0 in a match without much wear and tear for the Brazilians, but very complicated for the Peruvians.
6:27 PMa month ago 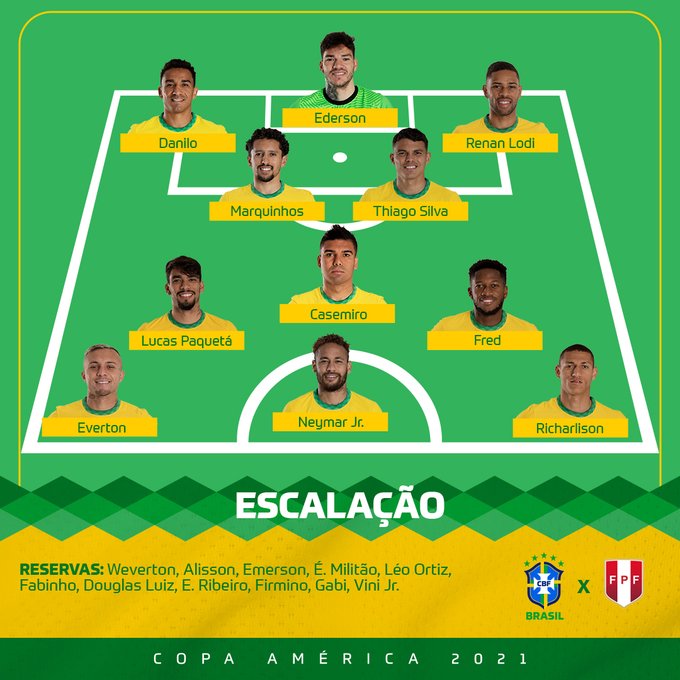 With 19°C weather and 81% humidity, everything is ready for the ball to roll in a few minutes at the Nilton Santos Olympic Stadium in the city of Rio de Janeiro.

In total, Brazil and Peru have played three times in the context of the semifinal in the Copa América. History is in favor of the Brazilians, as they have been victorious in two matches, while Peru has only won once.

Today will be the fourth match between the two teams in the semifinals of the continental competition. Who will reach the final?

Everything is ready to define the first finalist!

In a few moments we will present you all the details related to the match; statistics, lineups and everything related to tonight's Brazil vs Peru, which will be the match for the final of the Copa America 2021.

How and where to watch Brazil vs Peru

The broadcast in USA will be for TUDN, Fox Sports 1 and Univisión.

If you want to follow the match LIVE on the Internet, remember that VAVEL USA is your best option.

This is what Bacchi sent to the field for the quarter finals:
Tactical module: 1-4-2-3-1-1
In goal Ederson; by the defensive line formed Danilo, Marquinhos, Thiago Silva, Renan Lodi; on the part of the midfield; Casemiro and Fred; and in the front Richarlison, Gabriel Jesus, Neymar and Roberto Firmino.
1:56 PMa month ago

Yoshimar Yotún's incredible leadership has been a very important element for the Peruvian national team to be playing for a place in the final today.

In addition to being the one who leads the midfield and organizes most of the attacking plays for his team, in the quarterfinals he participated with a goal in the 85th minute, in addition to taking the corresponding penalty with great calm.

What he does on the field tonight will surely be decisive in order to advance to the final of the Copa América. 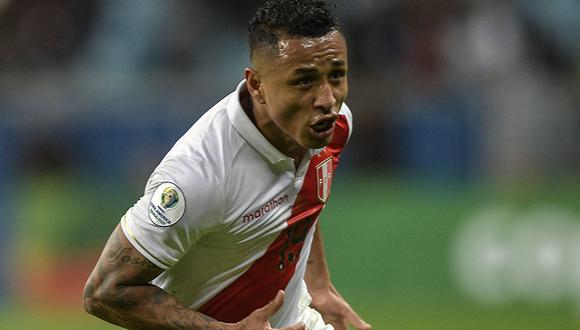 As the tournament progresses, the greater the responsibility is for the great players, which is why tonight all eyes will be on what Neymar Jr. does or does not do on the field.

This player is a world-class crack that the Brazilian fans demand from him like no other, which is why he will have to make the most of his most outstanding features such as his speed and good ball handling so that his team can achieve victory. 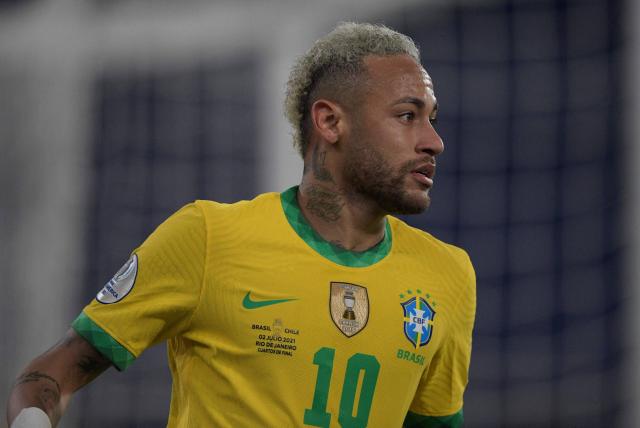 The Hinca team had ups and downs in the regular phase, finishing second in group b with seven points and a streak of two wins, one draw and one loss.

In the semifinal they had to face Paraguay in a match that was quite close and that they were leading until the 90th minute, but everything was tied 3-3 thanks to a goal by Gabriel Ávalos.

In the penalty kicks, there were several mistakes by the penalty takers, so everything ended up in sudden death with a score of 4-3.

It is worth mentioning that the Peruvian team will not be able to count on André Carrillo because he was sent off in the 85th minute of the quarterfinals.

Brazil arrives at a good pace

With three wins and a draw, the team that plays this tournament as home team, ended the group stage as leader of group B with 10 points out of a possible 12.

In addition, in the quarterfinals, they defeated Chile by the minimum and with Gabriel Jesus sent off at the 48th minute.

The goal of the match was scored by Lucas Paqueta, which they took care of throughout the second half in order to reach the semifinals of the tournament.

The match will be played at the Nilton Santos Olympic Stadium.

The Brazil vs Peru match will be played at the Nilton Santos Stadium in Rio de Janeiro, Brazil, with a capacity of 46,831 people.
The stadium is mainly used for soccer matches and athletics competitions.
On the other hand, Tite, technical director of the Brazilian team, requested that a change of stadium be made to play this important match, however, there will be no change of venue due to the poor conditions of the field.
"It is dangerous for high-level athletes, they can get injured," said the coach of the green-and-yellow team.

My name is Salvador Espino and I’ll be your host for this game.
We will provide you with pre-game analysis, score updates, and news as it happens live here on VAVEL.
The Peruvian team earned its ticket after defeating Paraguay 4-3 on penalties, following a thrilling 3-3 draw in regular time.
For their part, the Brazilians sealed their ticket with a narrow 1-0 win over Chile, with a goal by Lucas Paqueta.
Undoubtedly, it has been a difficult tournament for both teams who have managed to reach the semifinals with a lot of heart, and both with the same goal in mind, to win the 2021 edition of the Copa America.

NYCFC 4-1 Columbus: Boys In Blue blow away Crew for third straight victory a day ago

Austin FC vs Colorado preview: How to watch, team news, predicted lineups and ones to watch a day ago

Philadelphia Union vs Chicago Fire preview: How to watch, kick-off time, team news, predicted lineups, and ones to watch a day ago
//