It's over!!! The match ends and Panama beats Grenada. The Grenadians scored their only goal in this match.
1:20 AMa year ago

Granada wants the second, great arrival of Frank, but Griffith sweeps and prevents the move from growing
1:12 AMa year ago

Goal, goal, goal for Granada! Matthew Frank's great run on goal and the ball goes in, scoring the first goal of the tournament.
1:09 AMa year ago

Torres' through ball to Bárcenas, but the pass is too long and he misses a clear chance.
1:04 AMa year ago

Changes in Panama. Víctor Griffith and Jorman Aguilar are substituted for Adalberto Carrasquilla and Alberto Quintero.
1:00 AMa year ago

Goal, Panama goal! An excellent pass to Rodriguez, who cuts back and scores his brace with a great finish.
12:53 AMa year ago

Good coverage of Paterson, preventing the arrival of Panama
12:47 AMa year ago

Camargo's shot is blocked by Granada's defense.
12:43 AMa year ago

Orlando Stadium kicks off the second half
12:42 AMa year ago

Changes in Panama. Edgar Barcenas and Miguel Camargo are substituted for Ayarza and Yanis.
12:25 AMa year ago

End of the first part! Panama wins in a good way and is already ahead at halftime.
12:23 AMa year ago

Quite a tight game in the midfield, both teams are looking for, but neither team approaches the opponent's area.
12:16 AMa year ago

Good save by Cook, preventing Cordoba from shooting at his goal.
12:04 AMa year ago

Goal, goal, goal for Panama! José Luis Rodríguez receives the ball inside the box and crosses the ball in for his second goal of the night.
12:01 AMa year ago

Defense! Ayarza's definition that the defensive line ends up taking out and avoids the second almost on the line.
11:50 PMa year ago

Good save by Cook, who keeps the ball after Quintero's shot and avoids the second.
11:45 PMa year ago

Uff! Panama came with everything, this time Yanis drove and shot, but the ball went wide.
11:44 PMa year ago

Panama's goal! Alberto Quintero receives the ball, enters the box and does not hesitate to shoot to score the first of the night.
11:38 PMa year ago

For the sake of honor!

Panama no longer has anything to play for in this game, after Qatar's victory, the Panamanians are out of the tournament.
11:37 PMa year ago

The match kicks off at the Exploria Stadium in Orlando.
11:30 PMa year ago

Prior to this match, technical director Christiansen declared that the first objective of the Panamanians is to go in search of 5 goals, the rest does not only depend on his team.
11:01 PMa year ago

César Yanis spoke before the match: "It has been a dream for me to play in the Gold Cup. I'm also very happy for the goal, my first with the national team. But I'm not satisfied with what I've achieved, I want more. And tomorrow [today] we're going to give everything to go as far as possible".
10:56 PMa year ago

After a two-hour delay, both Panama and Grenada are already present at the Orlando venue, where they will be looking for the last victory of this phase.
10:51 PMa year ago

The match against Grenada will start after the scheduled time, the previous duel that takes place in the same building has not resumed after being suspended due to a thunderstorm.
10:46 PMa year ago

In a few moments we will share with you the starting lineups for Panama vs Granada live, as well as the latest information from the Exploria Stadium. Stay tuned for all the information in VAVEL US.
10:41 PMa year ago

How to watch Panama vs Grenada Live Stream on TV and Online?

If you want to watch the game Panama vs Grenada live on TV, your options is: Fox Sports 2.

What time is the Panama vs Grenada Gold Cup 2021 match?

This is the kick-off time for the Panama vs Grenada match in several countries:

Both coaches spoke after their matches and prior to this game; Thomas Christiansen, Panama's technical director stated: "Not having possession, we suffered many difficult losses".

Although it was not a great tournament for Grenada, coach Michael Findlay said: "We are pleased to be able to take advantage of these opportunities and we hope they continue. We also hope that our reputation as a footballing group has grown".

The last duel played between Panama and Grenada was a friendly duel held at the Kirani James Athletic Stadium, in October 2017. In that match, the Panamanians scored five goals to zero, Carlos Small and Alfredo Stephens were the authors of the goals, the first with a double and the second scored a hat-trick.
10:11 PMa year ago

Grenada will be looking to close its participation in this edition of the Gold Cup in a good way. The Grenadians lost to Honduras and Qatar, both by four goals to zero, so this afternoon they will go all out for the victory to close in a dignified manner.
10:06 PMa year ago

Panama comes into this match as third in the group; Christiansen's team will be looking for a categorical victory over Grenada and for Qatar not to beat Honduras, in order to qualify for the next stage. The Panamanians lost three goals to two against Honduras in their last match.
10:01 PMa year ago

This afternoon, Panama will face Grenada in the third and final match of the Gold Cup group stage. The match will take place at Exploria Stadium, located in Orlando, Florida. The stadium has a capacity of 25,500 fans. 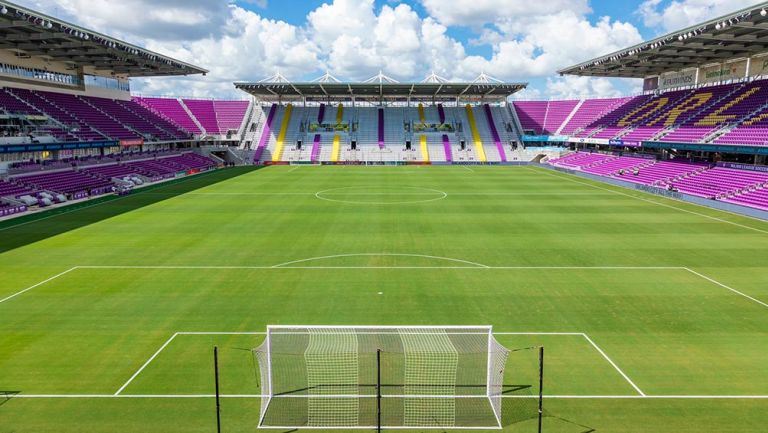 My name is Lorena Solórzano and I’ll be your host for this game. We will provide you with pre-game analysis, score updates, and news as it happens live here on VAVEL.