Thank you very much!

Thank you for following today's match in VAVEL, i'm Santiago Suarez it has been a pleasure being here! Good Night!
12:26 AM2 months ago

Both goals of today's match!

Put this one on repeat.

A goal's a goal 😅 pic.twitter.com/bxvFxJJBvm

The match ended 1-1 after many chances created, and it could have been 3-1 or even more for Houston, but Marcinowski was great at the back
12:11 AM2 months ago

The referee decides to show the red card to Carlos Fierro for the unnecesary foul and the yellow card for Maxi Urruti!!
12:09 AM2 months ago

The counter ends badly, Fierro is knocked down by Urruti, but Fierro on the ground, angrily kicks Urruti, and Urruti is down on the floor, but nothing bad happened.
12:05 AM2 months ago

The referee ads 6 minutes after many fouls and yellow cards.
12:00 AM2 months ago

Cade Cowell sends a los cross to Andres Rios, the defenders can't comunicate properly and Maric needs to clear it with both feet!!
11:55 PM2 months ago

Andres Rios waits for the ball to bounce and it pases milimiters above the goal!
11:55 PM2 months ago

Min 83: The player can continue

But the ball is weak and Maric grabs it
11:52 PM2 months ago

Min 80: A player from Houston is down

Teenage Hadebe is in need of Medical Atention
11:51 PM2 months ago

Min 76: another change for San José

min 71: Another change for Houston Dynamo

Min 68: another yellow card for Houston

Matías vera gets the third yellow card of the match.
11:39 PM2 months ago

Min 64: Another change for Houston

John Skhan is out

Cristian Espinoza is out

Salinas recovers and gets a corner kick! The corner kick is taken badly and Fafá Picault clears it.
11:30 PM2 months ago

Min 57: another yellow card for Houston

A great sprint from Fafá Picault, but Nathan slide tackles badly, but the corner ends in the goalies hands.
11:24 PM2 months ago

And the second half starts!!

This has been an exiting first half, with many chances, and a lot of free kicks, Nathan, from San Jose has been running all over the pitch, left and right, and he has comited a lot of fouls, but still no yellow card. I'll be back for the second half!
11:02 PM2 months ago

San Jose gets advantage of the free kick after the bad shot; Espinoza ends the free kick in, but Zarek Valentin couldn`t clear it properly and it ends in the back of the net!!! its 1-1!
10:59 PM2 months ago

The shot ends really bad, but there is a free kick for San José!
10:55 PM2 months ago

Great clearance by San José, but Matías Vera gets the ball on a half voley and smahes it bottom bins!! 1-0
10:47 PM2 months ago

Min 38: a Houston player is down again!

the shot is a half voley, inside the box but Marcinkowski makes a great save!!
10:39 PM2 months ago

A player is down and the free kick is taken, nothing happens!!
10:36 PM2 months ago

the stricker makes contact with the ball, but it goes wide!
10:35 PM2 months ago

Nothing happened with San José player
10:31 PM2 months ago

Min 19: Houston player May be injured

Great shot by Picault, but Marcinowski grabs it calmly!
10:23 PM2 months ago

Dangerous free kick for Houston that ends in the goalies hands.
10:20 PM2 months ago

The fourth referee needs to enter the pitch
10:18 PM2 months ago

Min 8: The referee is in need of atention

The referee  colides with a San Jose player
10:15 PM2 months ago

Wondolowski enters the area, puts it on the Mexican Lopez who sends it out !!!
10:13 PM2 months ago

And the match begins!!

San José Earthquakes have 3 players out!

Thompson has problems on the knee

Judson has a red card from the last match

Bersano has problems on the knee as well

There is a debutant for Houston Dynamo

San Jose could go up to 10th place

Although San Jose haven't had the best season, they have one of the best midfielders from last season, Christian Espinoza, and he is having a good season, and San Jose are on a Roll with 3 matches without losing, 3 draws.
8:59 PM2 months ago

Tab Ramos needs some inspiration to win; he could change the lineups, he could do some tactical changes or anything, but he needs to win today to go up in the table.
12:41 AM2 months ago

Do not miss a detail of the match with the live updates and commentaries of VAVEL. Follow along with us all the details, commentaries, analysis and lineups for this San José vs Houston.
12:36 AM2 months ago

Can Tab Ramos get going on winning ways?

The Houston Dynamo coach, as mentioned before, has not known victory since Matchday 6, and has had to move  lineups a lot, make changes of players to find the piece that completes the puzzle and be able to win. Can  Tab Ramos's team beat  San Jose earthquakes?
12:31 AM2 months ago

The 30 year old argentinian striker Maxi Urruti, has been a key for Tab Ramos's team. He's played Great football, and has scored 6 times and assisted once, that makes him the highest scorer from the team.
12:26 AM2 months ago

The 26 year old argentinian midfielder Christian Espinoza has played 14 matches out of 14 and he has been subed off once. He has socorred 1 goal across the 14 matches, but he has assisted 4 times, being the highest asister in the team.
12:21 AM2 months ago

When and where can you watch San Jose Earthquakes vs Houston Dynamo?

The match will be available on ESPN+, the ESPN app and on NBC sports. If you want to watch it on internet, live, your best option is VAVEL México.
12:06 AM2 months ago

Schedules of different countries to see the duel

These are all the different times to watch this game between San Jose Earthquakes and Houston Dynamo:

Tab Ramos's team hasn`t won since matchday 6 against Whitecaps FC after matchday 6 they have drawn 5 times and lost twice. Their last match was against Whitecaps and they drew 0-0 at the Rio Tinto Stadium can Tab Ramos wake up their team and win against San Jose?
11:56 PM2 months ago

!San Jose Earthquakes were held up in the last minute of the match!

San José Earthquakes last match was intense. they played against Sporting Kansas City and the match ended 1-1 but the intense part was that the San Jose defender Nathan Pelae socorred in the 53rd minute, but Sporting KC drew the match in the 90th minute thanks to a gol by Daniel Salloi.
11:51 PM2 months ago

PayPal Arena, located in San Jose, California, Will be the venue that will host the match between San Jose Earthquakes vs Houston Dynamo corresponding to the matchday 15 of the MLS. The stadium has space for 18,000 people
11:46 PM2 months ago

Good afternoon to all VAVEL readers! Welcome to the transmission of the   San Jose Earthquakes vs Houston Dynamo match corresponding to the 15th matchday of the MLS. The venue of the match will be at the PayPal Arena at 9:00 p.m.

D.C. United vs Chicago Fire preview: How to watch, kick-off time, predicted lineups, and ones to watch 3 days ago

NYCFC vs FC Dallas preview: How to watch, team news, predicted lineups and ones to watch 10 hours ago 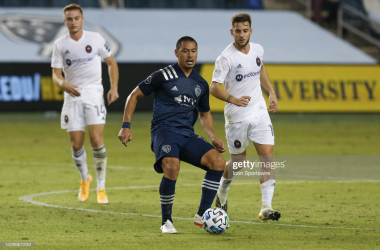 Sporting Kansas City vs Chicago Fire preview: How to watch, kick-off time, predicted lineups, and ones to watch 6 days ago