We hope you enjoyed the Seattle vs Sporting KC matchday fifteen of the North American men's soccer championship. Keep visiting the VAVEL website to stay up to date with all the information throughout the day.
11:19 PM2 months ago

Kansas jumps into the fight for the lead!

Sporting Kansas City achieved one of the most important victories of the season by defeating the leader of the Western Conference at home.

The first 15 minutes were dominated by the visitors, but little by little, the locals began to even the playing field. However, this did not prevent the Wizards from going ahead on the scoreboard.

Although in the second half Seattle managed to tie the situation, it did little to help them in the face of the great dominance that Kansas maintained, a factor that was reflected in the scoreboard.

With this result, Seattle Sounders remains on 32 points, while Sporting KC advances to 30 points on the season.

The game is over! In a surprising duel, the Kansas squad closes the gap on Seattle in the fight for the leadership of the Western Conference.

Possession continues in favor of the Wizards, who have neutralized the home team's attacks.
10:50 PM2 months ago

Last 10 minutes of the game! Kansas is moments away from taking the win.
10:45 PM2 months ago

The one that Montero missed! The striker had a clear scoring opportunity but unfortunately missed his shot.
10:42 PM2 months ago

GOOOOL for Kansas! Cameron Duke makes it 3-1 in favor of the Wizards and probably the score that sentences the visiting victory.
10:39 PM2 months ago

Substitution on the visiting bench.

This is how the discount arrived for Seattle

Double substitution for the home team, Brad Smith and Shane O'neil for Jimmy Medranda and Daniel Leyva.
10:32 PM2 months ago

Seattle Sounders continue to attack in an attempt to even things up on the scoreboard but the visitors continue to defend tooth and nail.
10:25 PM2 months ago

MELIA'S STRIKE! Seattle went all out on the attack and on Ruidíaz's lobbed shot, the Kansas keeper flies high to deflect the ball off the post.
10:20 PM2 months ago

GOAL for Seattle! In a play of a thousand bounces, the ball falls to Fredy Montero to push the ball into the back of the net.
10:17 PM2 months ago

Fredy Montero's deflected shot ends up in the possession of the rival goalkeeper.
10:13 PM2 months ago

The action restarts! The ball is back in play at Lumen Field for the second half.
10:06 PM2 months ago

With this goal, Daniel Sallói scored for the first time against Seattle, something that had not happened since he arrived in MLS.

Stop the actions! The referee decrees the end of the first half, the second place is beating the first place 2-0 at the moment.
9:54 PM2 months ago

Final stretch of the first half, added: 3 minutes.
9:51 PM2 months ago

GOOOL FOR KANSAS! One more goal for the Hungarian Daniel Salloi this season. With a bomb from outside the box, the visitors already lead 2-0.
9:45 PM2 months ago

Seattle substitution, R. Baker-Whiting in, A. Cissoko out. Cissoko.
9:40 PM2 months ago

GOAL for Kansas! Johnny Russell takes a spectacular free kick outside the box and sends it home.
9:38 PM2 months ago

Danny Leyva is the first cautioned of the match.
9:37 PM2 months ago

Joao Paolo sends in a dangerous cross but again the Wizards' defensive wall blocks it. The roles in the match are reversed!
9:34 PM2 months ago

Seattle responds! From a great cross by Atencio, Yeimar Gomez heads just wide of the goal.
9:32 PM2 months ago

What Kansas missed! Roger Espinoza fails to finish inside the box and misses the first goal of the match.
9:27 PM2 months ago

Russell lets a promising attack slip by sending a poor shot over the crossbar. Kansas is still on top!
9:25 PM2 months ago

With 15 minutes gone in the first half, the home side maintained possession but the visitors were the ones who attacked the most.
9:23 PM2 months ago

SEATTLE SAVED! Kansas tried to do some damage with a through ball between the lines, but Cleveland played their penalty area correctly to get the ball.
9:19 PM2 months ago

Daniel Salloi's dangerous cross is cut out correctly by the defense.
9:17 PM2 months ago

Dangerous corner kick for the visitors.
9:15 PM2 months ago

Graham Zusi foul that results in a free kick for Seattle.
9:08 PM2 months ago

The referee whistles the start of the match and the ball is rolling at Lumen Field.
9:01 PM2 months ago

We will shortly start with the minute-by-minute coverage of the Seattle Sounders vs Sporting Kansas City, match corresponding to the 15th date of the MLS regular season.
8:59 PM2 months ago

The fans are already making themselves felt!

Seattle fans slowly but surely make their way to Lumen Field to support their team - A GREAT TIME!

Honor to whom honor is due.

Great and respectable way for Seattle to recognize the great Jimmy Gabriel.

We wouldn't be where we are today without the influence of Jimmy Gabriel. #SoundersMatchday | #SEAvSKC pic.twitter.com/8hfpYvGkYk

The visiting team is already warming up ahead of the match in Seattle.

You may find this useful

Comin' atcha. In a variety of ways 👇

Will there be warning cards?

Both teams are among the teams that receive the fewest cards during a match, with a total of just one card for any player.
8:30 PM2 months ago

The local players are already at home to defend their lead.

There will be a lot of shooting!

The 11 looking for a surprise

This is the starting eleven with which Kansas will look to take the three points from Seattle. 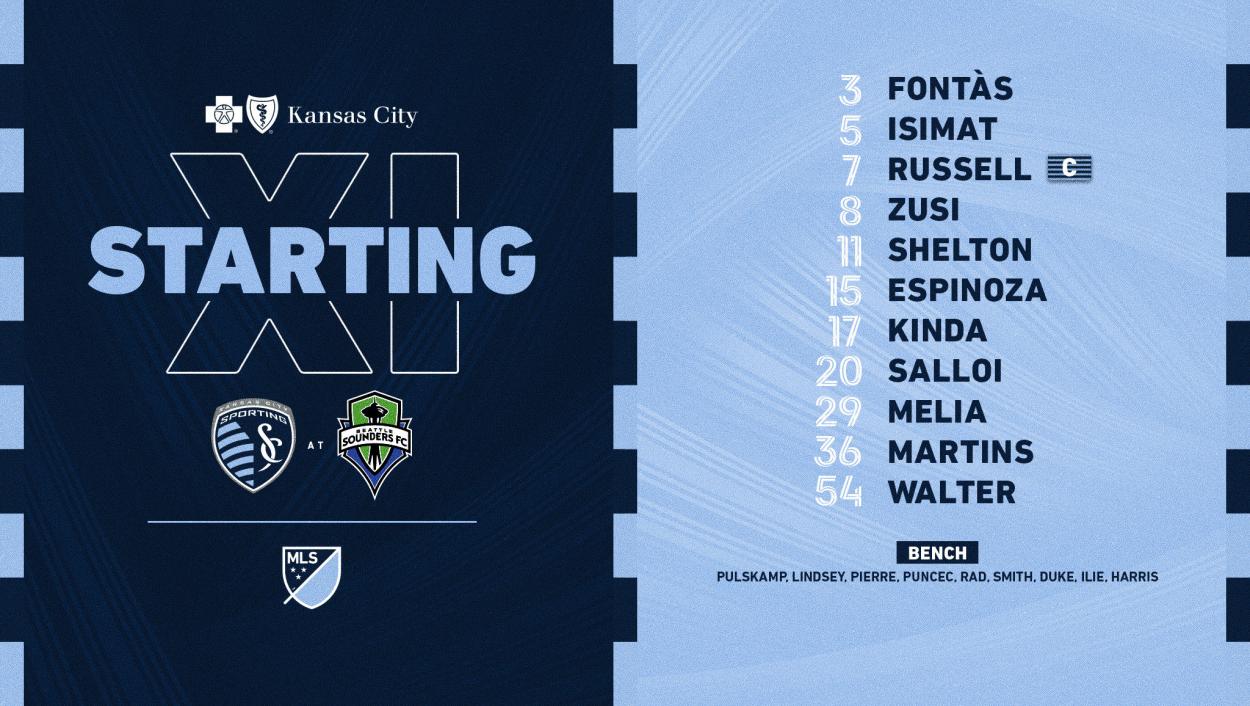 This is how Seattle's starting eleven will start

These are the 11 men the Seattle Sounders send to the field at Lumen Field. 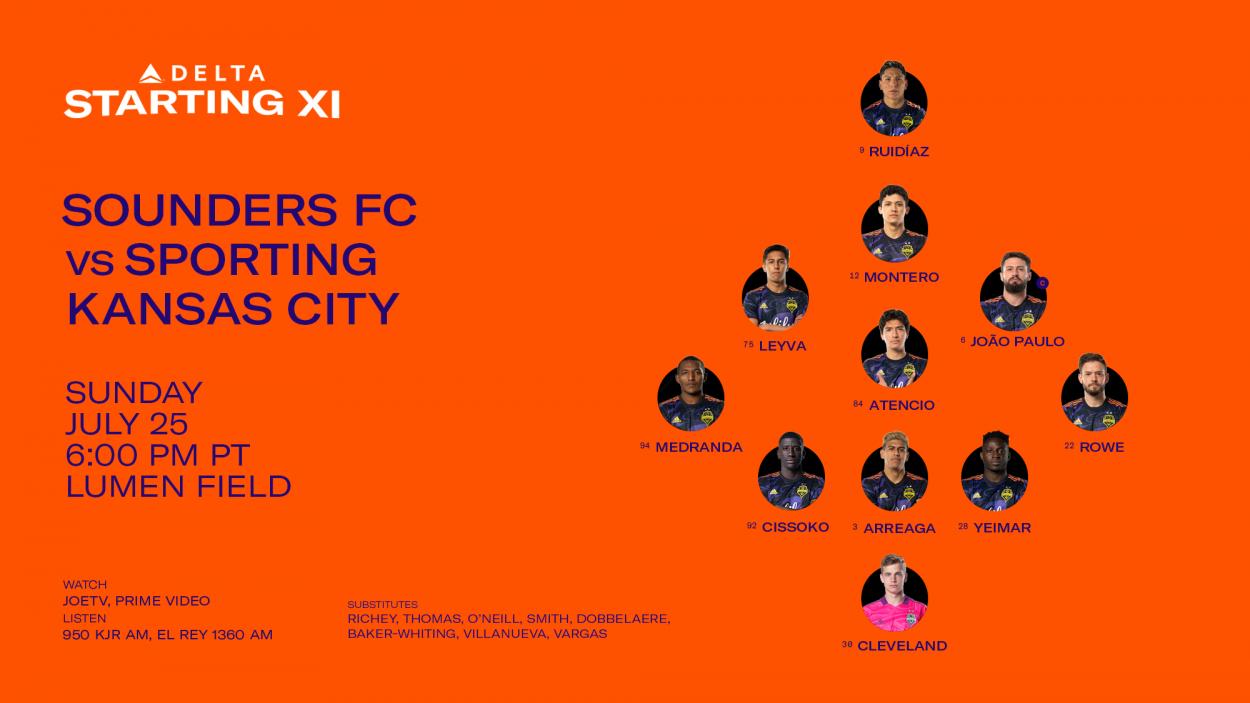 In this way, Sporting Kansas City makes it known that for this type of duels it is always necessary to wear something fresh.

The long-awaited day has arrived, the match of the day and perhaps of the season. The first against the second place, a duel that could define the leadership of the MLS Western Conference.

Congratulations to the birthday boy!

Peru's Raúl Ruidíaz is celebrating his 31st birthday and what better way to do it than playing at home and with his people, and today the entire Lumen Field will be backing his goal scorer!

It's a matchday birthday for Raúl! 🥳

Do not miss a detail of the match with the live updates and commentaries of VAVEL. Follow along with us all the details, commentaries, analysis and lineups for this Seattle Sounders vs Sporting Kansas City match.
8:02 PM2 months ago

This is the start time of the game Seattle Sounders vs Sporting Kansas City of 25th July in several countries:

Both teams have met at least 20 times (9 wins for Seattle, 7 wins for Kansas and 4 draws) in the history of MLS, and these meetings are usually accompanied by goals as there has only been one scoreless draw between the two sides. The most recent scoreline dates back to August 4, 2019 where the Wizards would take all 3 points from Lumen Field by an electrifying score of 2-3.
7:52 PM2 months ago

Daniel Salloi, the team's star player and a visceral killer in the penalty area, could make the difference in this match. The Hungarian-born player has scored 8 goals so far this season and has been in the starting lineup 12 out of 14 times. Interestingly, Salloi has never scored against Seattle, so this match could mean the first goal for the Sounders Rave Green.

It doesn't matter how it gets there, just that it ends up in the back of the net!@danielsalloi with the smash in equalizer!#SKCvSJ | #SportingKC pic.twitter.com/XnoYPqXxi6

The team's top goal scorer Raul Rui Diaz will be the player to watch in this match, the Peruvian has scored more than 50 goals since he arrived in Seattle, 11 of which correspond to the current campaign and is one of the fundamental pieces Schmetzer in each of his matches, so throughout these 90 minutes he could break the net at any time.

The refereeing quartet will be composed of Ramy Touchan as center referee, Ian Anderson and Jeff Hosking will serve as assistants 1 and 2, and the fourth official will be Michael Radchuk. Hilario Grajeda and Michael Kampmeinert will be in charge of the VAR to review any questionable play.
7:27 PM2 months ago

They rescued the tie with tooth and nail

Sporting Kansas City received the San Jose Earthquakes in midweek, after a hard-fought first half, the visiting team went ahead on the scoreboard, however, the locals were able to overcome the adversity and never gave up their arms so that with a shot from Daniel Salloi's boot at 94' the match was tied and the points were divided at Sporting Park. 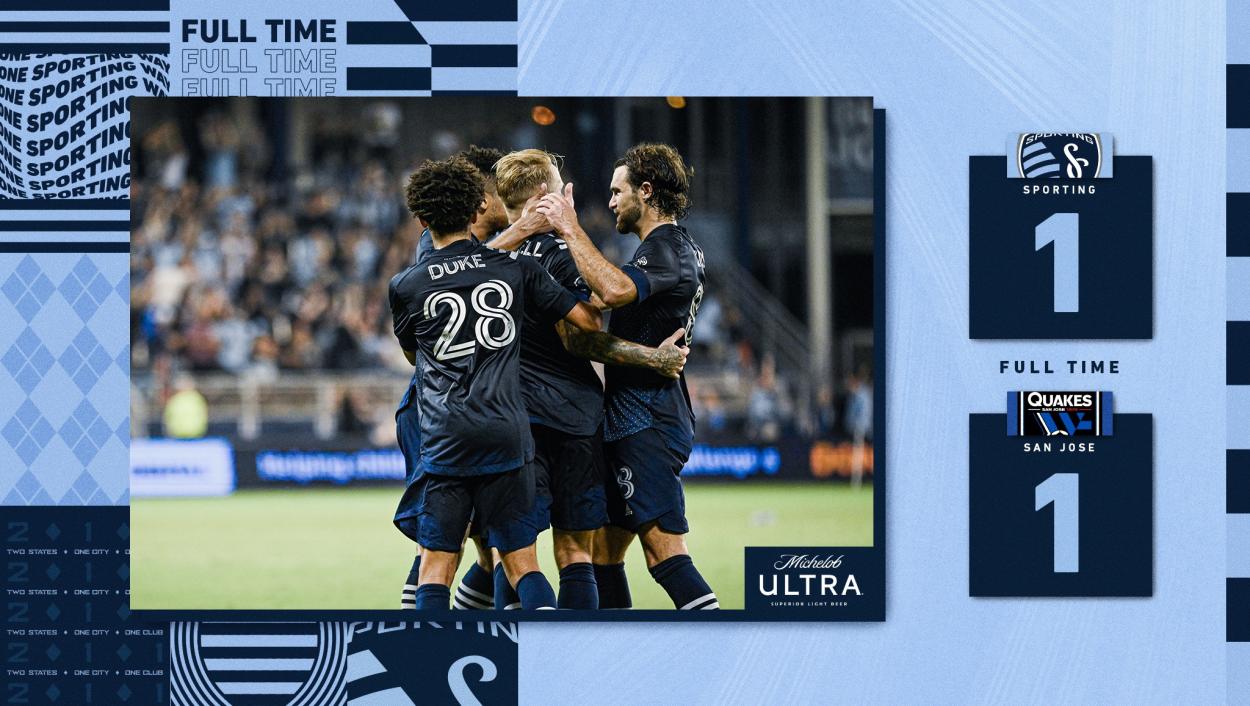 The leaders of the Western Conference went to Q2 Stadium to face the newborn Austin FC, with an alternate team and a solo goal by Raul Rui Diaz, Seattle extended their lead for another day to put them 5 points behind their pursuer, Sporting Kansas City.

We still can't believe that happened 😂

Social Timeline: Twitter's reaction to one of the most memorable goals in club history! 💻

The Seattle Sounders vs Sporting Kansas City match will be played at the Lumen Field, in Seattle, U.S.A. The kick-off is scheduled at 20:00 pm ET.
7:12 PM2 months ago