I would like to thank you here for your audience in another Olympics match. Stay tuned right here on VAVEL for all the coverage of the Tokyo games. Have a nice day and see you next time!
7:36 AM2 months ago

Australia goes to the semis and waits for the winner of Sweden and Japan. At the moment Sweden wins 3-1! The ball starts rolling on Monday (2), at 8am!
7:33 AM2 months ago

AND IT'S OVER! HEROIC! INCREDIBLE! AUSTRALIA ELIMINATES BRITAIN AND GOES TO THE SEMIFINALS OF WOMEN'S SOCCER AT THE OLYMPICS!
7:29 AM2 months ago

Another cross in the box, White managed to get a deflection at the first post and reduced the score, giving hope to the British women!
7:20 AM2 months ago

On the cross coming from the left Kerr got the header, hitting the crossbar and sending it into the back of the goal!
7:18 AM2 months ago

Australia is the one who gives the go-ahead, and now the second stage of the reprieve begins.
7:16 AM2 months ago

With a goal from Fowler, Australia goes ahead in extra time and the first half ends!
7:13 AM2 months ago

Fowler had the ball on the edge of the box and hit it high into the left side of the goal, with no chance for Roebuck! Australia wins the match!
7:12 AM2 months ago

Weir hit it into the left corner and goalkeeper Micah flew in to pick it up!
7:11 AM2 months ago

On a cross in the box the England striker was brought down and the referee awarded a penalty! Weir on the ball!
7:04 AM2 months ago

White received the ball through the middle and got the shot, but Micah put it over the goal!
7:00 AM2 months ago

Great Britain leads the way and the ball rolls into the first half of overtime!
6:54 AM2 months ago

The match ends in a draw in normal time and we go to overtime!
6:48 AM2 months ago

The ball was left with Kerr in the middle after a cross into the box and she finished strongly to tie the match once again!
6:43 AM2 months ago

Hemp got the ball in the middle of the field, carried it little and hit it very far as Micah was early, but sent it through the left side of the goal!
6:38 AM2 months ago

The free-kick from the right was deflected by Yallop to the first post, with danger, but out!
6:25 AM2 months ago

When Australia's defense made a mistake on a lateral pass into the area, White got the ball and hit it hard, with goalkeeper Micah defending, but it went into the back of the net!
6:19 AM2 months ago

Kerr received the ball on the left and got the shot over the defense, but the ball went up and pinged off the crossbar, falling in the middle of the area where the defense took it away!
6:17 AM2 months ago

On a good cross from the right by Hemp, White got the header high, with no chance for Micah, tying the match!
6:14 AM2 months ago

Hemp took a long shot and sent it into the hands of Micah, who did not give it a rebound.
6:11 AM2 months ago

Kerr received through the middle and tried to finish, but sent it into the stands.
6:07 AM2 months ago

Great Britain kicks off now and the ball is rolling for the second leg of the decisive match in the quarterfinals of women's soccer!
5:49 AM2 months ago

With a goal from Kennedy, Australia goes on to beat Great Britain and qualify for the semis of women's soccer at the Olympics!
5:39 AM2 months ago

At the corner cross, Kennedy got free and went high to head it into the right corner of Roeuck, who could do nothing!
5:27 AM2 months ago

Daly received the ball on the left end and crossed, but it hit the post! On the rebound Hemp hit hard, but Micah deflected for a corner that was beaten in the area and finished, but over the defense!
5:17 AM2 months ago

Walsh charged and shot from outside the area, hitting the right post!
5:17 AM2 months ago

In another shot by Daly, Micah managed to save the ball, but it was offside.
5:10 AM2 months ago

The first shot was a shot from outside the area by Walsh, into the hands of goalkeeper Micah!
5:10 AM2 months ago

England leads the way and the ball rolls into the first half of Great Britain and Australia!
4:58 AM2 months ago

Team on the pitch!

The players from Great Britain and Australia appear on the pitch to start the match!
4:40 AM2 months ago

At 6am Sweden faces Japan and at 7am the Netherlands faces Sweden, finalizing the quarterfinals of the competition.
4:33 AM2 months ago

So far Brazil is playing a scoreless draw against Canada, in a match that started at 4am. This match you will see now is the only one in the round.
4:24 AM2 months ago

The players take to the field to begin their warm-up exercises.
4:17 AM2 months ago

The new additions to the British team are Houghton in defense, Walsh and Little in the middle, and Hemp and Daly in attack.
4:17 AM2 months ago

Great Britain is lined up and comes into the match with: 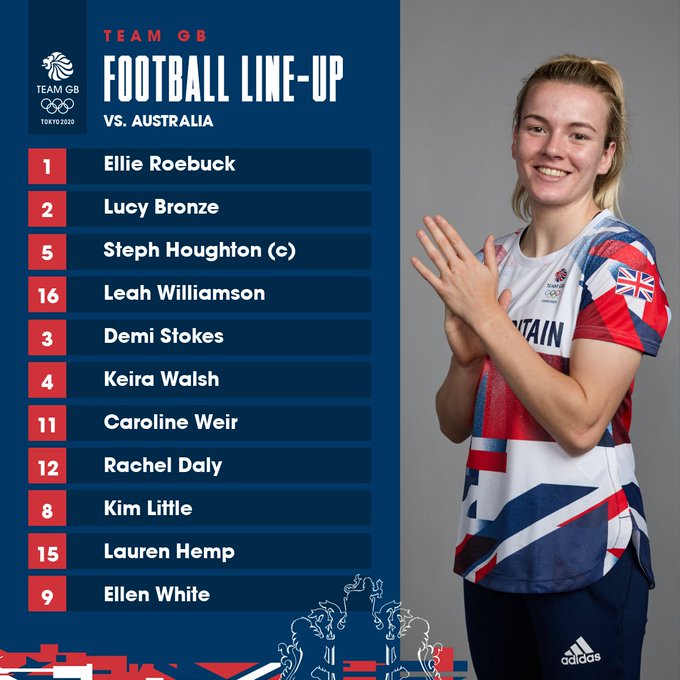 Australia has been lined-up for the match and will field:

Here is how @TheMatildas line up against @TeamGB in the #Tokyo2020 Quarter Finals!

Now begins the broadcast of the quarterfinal match between Great Britain and Australia in women's soccer at the Olympics!
9:48 PM2 months ago

Do not miss a detail of the match with the live updates and commentaries of VAVEL. Follow along with us all the details, commentaries, analysis and lineups for this Great Britain vs Australia match.
9:43 PM2 months ago

If you want to watch the game Great Britain vs Australia live on TV, your options is: NBCSN.

If you want to directly stream it: Streaming services and Futbo TV app.

The probable line-up for Australia is: Micah, Carpenter, Polkinghorne and Luik; Raso, Egmond, Butt and Catley; Simon, Foord and Kerr.
9:33 PM2 months ago

Both teams come into the match with no absentees and at their full strengths!
9:23 PM2 months ago

Great Britain coach Hege Riise commented on the decisive match and the Olympics: "All the players buy into this, they know what it will take for us to go all the way. I feel we've done a great job, now it's the knockout stage and it's about how brave we are. I feel like we are in a good place now, the players feel comfortable, they feel like we are doing the right things. I'm excited about the game." In addition she commented on Kirby: Everyone is healthy and available," said Riise.
"She played 15 minutes in the last game just to get into the rhythm of the game. We discussed whether she can go for 90 or less."
9:18 PM2 months ago

In group G Australia came third, with Sweden leading with nine and the United States second, also with four. New Zealand was bottom with no points earned.
9:13 PM2 months ago

Great Britain came first in group E with seven points, with Canada second with five, Japan third with four points, and Chile in last place with no points.
9:08 PM2 months ago

Australia, meanwhile, had one win, one draw and one defeat in the group stage: a 2-1 victory over New Zealand, with goals from Yallop and Kerr, with Rennie scoring the equalizer, a scoreless draw with the United States, and a 4-2 loss to Sweden, which was scored by Blackstenius, Rolfo (2) and Hurtig. Kerr, twice, scored for the Aussies.
9:03 PM2 months ago

Great Britain come into the match after managing two wins and a draw in their three group matches, with a 2-0 win over Chile, with two goals from Ellen White, a 1-0 win over the hosts, Japan, with a goal from Ellen White, and a 1-1 draw with Canada, with de Leon for the Canadians and Prince, against, for the British.
8:58 PM2 months ago