Thank you for listening to this friendly match here on VAVEL! Have a good afternoon and see you next time!
1:54 PM2 months ago

With a goal from Werghorst, Wolfsburg took the lead, only to see Garcés and Sánchez turn the match around!
1:47 PM2 months ago

Sánchez received a pass from Garcés in front and hit it firmly into the goalkeeper's left corner to turn the match!
1:44 PM2 months ago

Remember that this is a friendly match? Well, Arias and Mbabu bumped into each other and started pushing each other! Yellow card for both.
1:31 PM2 months ago

On Sánchez's cross from a free-kick, Garcés headed high into the right corner to tie the match!
1:29 PM2 months ago

Simeone received the ball in front, entered the area and hit it hard, but it hit the crossbar!
1:26 PM2 months ago

When Pervan made a mistake inside the small area, Simeone managed to keep the ball, but shot the ball into the net!
1:24 PM2 months ago

From the left Wolfsburg won a free-kick to lift in the area. Phillip on the ball, but there was an attacking foul after the strike.
1:20 PM2 months ago

So far the game is ugly and with many fouls and few chances.
1:08 PM2 months ago

Now Atletico Madrid gets the first touch on the ball and it rolls into the second half!
1:07 PM2 months ago

The players return to the pitch with many substitutions.
12:49 PM2 months ago

END OF FIRTS HALF

At the corner from the right Werghorst dribbled and sent the ball over the goal!
12:42 PM2 months ago

On the far throw Werghorst left the ball to Phillip, who gave it back to him inside the box. And in the face of Oblak, Werghorst dug in to open the scoring!
12:34 PM2 months ago

Yellow for Simeone, for bringing down Nmecha on the left.
12:29 PM2 months ago

On Brooks' mistake Simeone got the ball inside the box and hit it hard, high, but out!
12:27 PM2 months ago

Gerhardt took a long shot and sent it past Oblak's left side, but it went wide!
12:23 PM2 months ago

Phillip took the corner and there was an attacking foul.
12:23 PM2 months ago

A corner was taken and the ball went past everyone, going to the left, where Mbabu made a good move and won a corner.
12:22 PM2 months ago

The corner was taken and there was a deflection over the goal. Following the play Steffen tried a cross and won a corner.
12:21 PM2 months ago

The free-kick was hit into the barrier and Atleti got the rebound, where Simeone tried his shot and hit the mark, earning a corner kick.
12:16 PM2 months ago

Phillip hits the corner hard and the attack still gets the ball.
12:16 PM2 months ago

Mbabu tried the cross and hit the mark, earning a corner.
12:14 PM2 months ago

Serrano gives Paulo Otávio a hard tackle on the side, near midfield. The Brazilian full-back was taken off the field by doctors and will return to the bench on a stretcher. In his place comes Mbabu.
12:05 PM2 months ago

In the corner the defense didn't take it, Guilavogui tried twice and Nmecha hit hard from the right, but over the goal.
12:04 PM2 months ago

A corner was taken and Saul deflected it over the goal for another corner, almost scoring an own goal.
12:04 PM2 months ago

Steffen tried the move on the right and won a corner.
12:02 PM2 months ago

The ball starts rolling as Wolfsburg departs for the friendly match!
12:01 PM2 months ago

The players appear on the field to start the match!
11:47 AM2 months ago

The players go back to the dressing rooms to continue their preparation for the match and soon after return to the field for the ball to roll!
11:46 AM2 months ago

The stadium for today 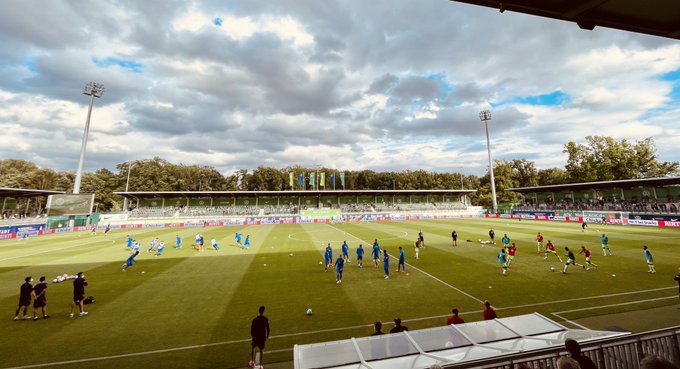 The players take to the field to begin their warm-up exercises.
11:17 AM2 months ago

Atleti have some new additions on the field today. In defense comes Vrsaljko and Montero, with Saul on the left. In the middle we will have three newcomers: Serrando, Kondogbia and Lemar. In the attack Camello and Giuliano start.
11:15 AM2 months ago

Atlético de Madrid is scheduled for the match and comes with:

Line up of Wolfsburg

What's new for Wolfsburg are Pervan in goal, Werghost and Nmecha on the pitch!
11:13 AM2 months ago

Wolfsburg are lined up for the match and come with:

Now begins the broadcast of the international friendly match between Wolfsburg and Atlético de Madrid!
11:52 PM2 months ago

Do not miss a detail of the match with the live updates and commentaries of VAVEL. Follow along with us all the details, commentaries, analysis and lineups for this Wolfsburg vs Atletico de Madrid match.

How to watch Wolfsburg vs Atletico Live in TV and Stream

If you want to watch the game Wolfsburg vs Atletico live on TV, your options is: ESPN.

Atlético Madrid, on the other hand, were defeated by Salzburg and took the field with: Oblak, Riquelme, Camus, Gonzalez, Hermoso and Sánchez; Saul, Rebanal and Valera; Carreño and Simeone. The team on the field should be the same as in the last match.
11:37 PM2 months ago

In the last match, with defeat to Monaco, Wolfsburg took the field with: Casteels, Baku, Brooks, Lacroix and Paulo Otávio; Guilavogui, Gerhardt and Philipp; Victor Sá, Steffen and Ginzek. The lineup should be repeated in today's match.
11:32 PM2 months ago

With the results in the National Championships, Wolfsburg and Atlético de Madrid will be in the Champions League 2021-22. Neither team has ever won the competition.
11:27 PM2 months ago

Atletico Madrid scored 86 points, becoming the 2020-21 La Liga champions. Real came close to being champions, with 84 points. Barcelona added 79 points and was third, above Sevilla, who got 77 points.
11:22 PM2 months ago

In the Bundesliga Wolfsburg had 61 points, placing fourth, one point above Eintracht Frankfurt, and three below Borussia Dortmund. Leipzig was second with 65 points, while Bayern was the champion with 78 points.
11:17 PM2 months ago

Atlético played two friendly matches, when they drew 1-1 with Numancia, opening the score with Carreño, but seeing Diego Suárez equalize for Numancia. In the penalty shootout, Atleti won 5-4, and against Salzburg, Atleti was defeated 1-0, with a goal by Adeyemi.
11:12 PM2 months ago

Wolfburg comes after making already five friendlies this preseason. The victory came only against Erzgebirge Que, then Wolfsburg went on a four-game losing streak, with a 3-0 to Hansa Rostock, a 1-0 to Holstein Kiel, a 4-1 to Lyon and a 2-1 to Monaco. After the clash against Atleti, Wolfsburg open the German Cup against Preussen Munster.
11:07 PM2 months ago