Thank you here for your audience in this friendly match here on VAVEL. Have a good afternoon and see you next time!
2:54 PM2 months ago

It's another for Gundo! 😎

A little bit more Mahrez magic for you all! 🔥

With goals from Gundogan (2), Mahrez and Edozie, City thrash Blakpool, who even drew with garbutt, but it wasn't enough!
2:46 PM2 months ago

John-Jules received inside the area, dominated, looked at the goal and hit a cross, but from the left side, out!
2:43 PM2 months ago

Rogers received the ball in front of him and was able to finish, but it went over the goal!
2:34 PM2 months ago

Gundogan received a lift in the area, dominated and, in the face of the goalkeeper, managed to finish, making the fourth goal and turned it into a score!
2:21 PM2 months ago

Fernandinho managed a good shot from outside the area, which deflected off the defense and went into Moore's hands.
2:17 PM2 months ago

A ball into the box by Mahrez, Gundogan came out in front of the goal and hit a right-footed shot to make City's third!
2:15 PM2 months ago

Mahrez received a long pass from Fernandinho inside the box and managed to hit a cross, on the right corner of the goalkeeper, who could do nothing!
2:05 PM2 months ago

STARTS THE SECOND HALF

Manchester City leads the way and the ball rolls into the second half!
2:03 PM2 months ago

The teams appear on the pitch to start the second half!
1:47 PM2 months ago

In a draw so far, City and Balckpool now leave the pitch to go to the locker rooms!
1:44 PM2 months ago

Mahrez found Cancelo on the right, inside the penalty area, who took the marker with a beautiful dribble and tried to finish, but it was weak, in the hands of the goalkeeper!
1:40 PM2 months ago

In a table on the right, Cancelo received in front, invaded the area and hit hard, but out!
1:39 PM2 months ago

Now, due to injury, a substitution happens at Blackpool. Stewart has gone out and Antwi has come in.
1:34 PM2 months ago

Endozie received the ball on the left, carried it to the middle, and hit it hard, but Moore sprawled far away!
1:25 PM2 months ago

Mahrez received the ball on the right, got a good move and found Cancelo in the middle, who arrived knocking over the goal.
1:22 PM2 months ago

Lavery burst through the middle and was brought down by Dias! From the penalty spot Garbutt hit it high into the right corner, with no chance for Steffen!
1:20 PM2 months ago

The goal of Edozie

The electric Edozie gives us an early lead! ⚡️

Catch the whole game over on CITY+: https://t.co/yqvkOTNnin

Bowler tried his shot from outside the area and sent it wide of the goal.
1:11 PM2 months ago

In another cross from the right, the defense took a corner. Knight complained about a pull and a corner, but the referee awarded a goal kick.
1:09 PM2 months ago

A cross from the right, Edozie opens the scoring!
1:07 PM2 months ago

The ball rolls for City and Blackpool in the international friendly with Blackpool's exit!
12:43 PM2 months ago

There are 78 games between Blackpool and Manchester City, where the hosts today have won 35, drawn 24, and seen the visitors win 19 of them.
12:29 PM2 months ago

The players now go up on the field to start their warm-up exercises.
12:21 PM2 months ago

Blackpool is lined up for tonight's match and comes with: 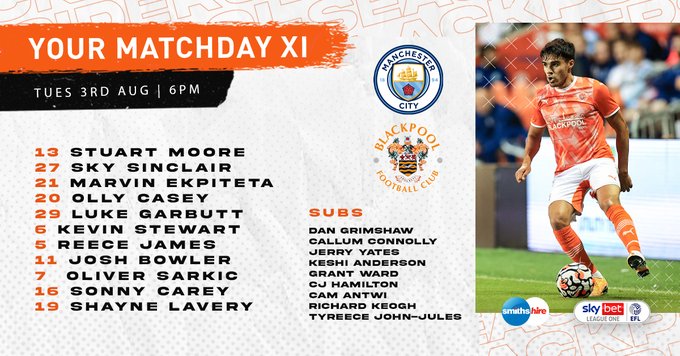 Manchester City has a line-up for tonight's match and comes with: 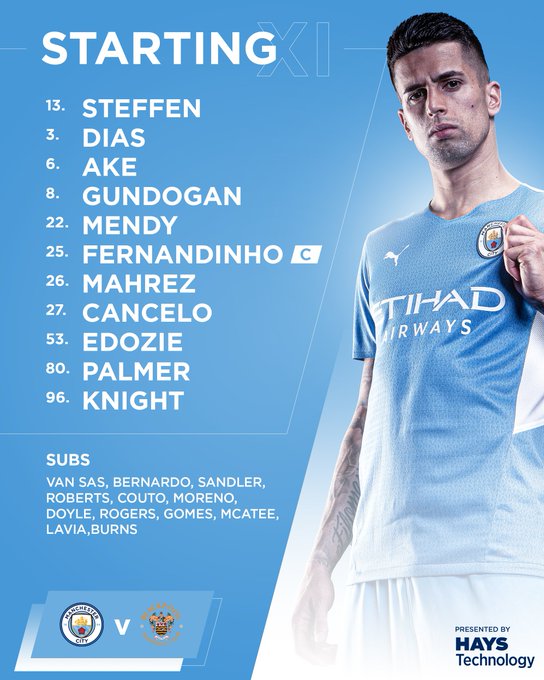 Now the broadcast of the International Friendly Match between Manchester City and Balckpool begins!
10:52 PM2 months ago

Do not miss a detail of the match with the live updates and commentaries of VAVEL. Follow along with us all the details, commentaries, analysis and lineups for this Manchester City vs Blackpool match.
10:47 PM2 months ago

If you want to directly stream it: Streaming services and City+ app.

Since these are friendly matches we will only have the lineups when they are released, and this is a major doubt for the match.
10:37 PM2 months ago

In League One, the famous English third division, Blackpool finished the competition in third place with 80 points, seven behind second-placed Peterborough and nine behind Hull City. But in the semifinals, Blackpool won 3-0 and drew 3-3 with Oxford United, going to the final, where they faced Lincoln City, winning 1-0 and being League One champions, qualifying for the Championship, England's second division!
10:32 PM2 months ago

In the Champions League, City also had a good campaign, going to the first final in its history in the competition. But there it was defeated by its rival Chelsea, 1-0, with a goal by Havertz.
10:27 PM2 months ago

In the Premier League, Manchester City won the season's trophy with 86 points and the title in advance. The runner-up was Manchester United, with 74 points. Closing out the top four were Liverpool with 69 points and Chelsea with 67.
10:22 PM2 months ago

Against Squires Gate, in the first friendly match there on the ninth of July, Blackpool won 7-0. The day before, against Southport, Blackpool won 2-0. On the 17th came the first defeat, 3-1 to Newport County. Shortly after, another defeat, by 3-1 to Accrington Stanley. On the 24th Blackpool won again, beating Caelisle United 1-0. After that came a 1-0 loss to Burnley and a 1-1 draw with Morecambe.
10:17 PM2 months ago

Blackpool, on the other hand, have played SEVEN friendly matches so far in the pre-season, against a wide variety of teams, tallying three wins, three losses, and one draw so far.
10:12 PM2 months ago

Manchester City played two pre-season friendlies before this match against Blackpool. And in both they managed to leave the field with a victory.
10:02 PM2 months ago