The post of the day: one more trophy in Getafe's trophy cabinet!

We hope you enjoyed the broadcast of Getafe vs Real Zaragoza in the 55th edition of the Lapetra Trophy. Continue to visit the VAVEL portal to keep up to date with all the information throughout the day.
5:19 PM2 months ago

They get their second trophy!

In a very close match, with few but very even chances, it was the Blue and Whites who came away with the victory at La Romareda.

The 90 minutes were full of few emotions and many tactical plays, however, neither team managed to hurt each other in extra time, so the match had to go to penalty kicks.

In the penalty shootout round, the goalkeepers were the ones who took the spotlight as they were a factor in the shootout and extended it to sudden death, however, the local goalkeeper could do little in the decisive shootout.

Getafe did not forgive after Conde's save and is proclaimed champion of the Lapetra Trophy!

CONDE FALLS! CLOSE TO THE TROPHY
5:09 PM2 months ago

GOAL! Iglesias ties things up for Getafe
5:09 PM2 months ago

CONDE ATTACK! Getafe is close to winning
5:07 PM2 months ago

French misses his shot and puts Zaragoza at a disadvantage
5:00 PM2 months ago

GOOOOL! Adrián scores the first for Zaragoza.
4:55 PM2 months ago

THE MATCH IS OVER! Both teams did not manage to hurt each other and we go to the penalty shootout to see who will win the Lapetra Trophy.
4:50 PM2 months ago

Change in the Local Bench!

Getafe take a corner kick from the right that ends in a throw-in.
4:46 PM2 months ago

Francho's attempt in a good counter that ends in a corner for Real Zaragoza.
4:43 PM2 months ago

last 10 minutes! The match is still tied at nil-nil and both teams are still looking for the goal that will put them ahead on the scoreboard.
4:41 PM2 months ago

Francho Serrano gets the first yellow card of the match after a foul on Sandro in midfield.
4:35 PM2 months ago

Changes in the local squad!

A corner kick taken by the lions' corner ends up in a bad shot by Adrián.
4:26 PM2 months ago

Changes in the match! 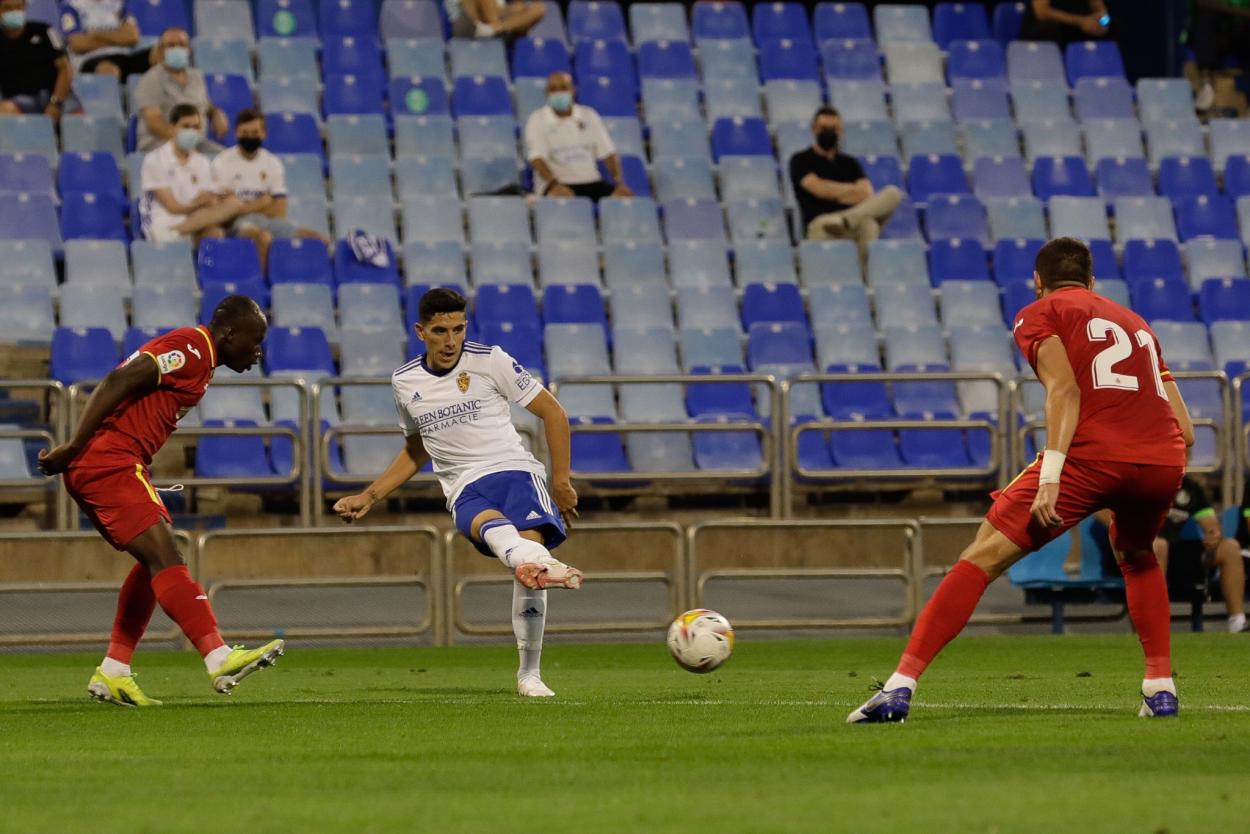 The team from the south of Madrid started with everything in the second half and did not give Zaragoza a break.
4:13 PM2 months ago

Player on the turf! Arambarri ends up collapsed on the turf after a clean contact on the edge of the area.
4:10 PM2 months ago

Getafe approach! A. Ratón makes a good save from a dangerous shot by Ambarri.
4:08 PM2 months ago

The first 45 minutes of this match are over. Getafe had the clearest goal so far, but the score remains 0-0.
3:50 PM2 months ago

ZARAGOZA IS SAVED! A corner kick taken by Getafe that ends up hitting the crossbar after a well connected shot by Mata.
3:48 PM2 months ago

Koffi tries to do some damage with a cross into the box but A.Francés makes a very safe save in the defensive zone to keep the game scoreless.
3:45 PM2 months ago

Getafe's arrival! In a cross that carried danger for Zaragoza, Christian Álavarez does very well with the ball and prevents Olivera from getting to the finish.
3:40 PM2 months ago

The fans make themselves felt

La Romareda has once again had a crowd and the fans are excited to return to their home ground.

Narvaés tried to send a cross from the right side of the field but again Diego Conde controlled the ball well.
3:34 PM2 months ago

A high cross by the lions that Conde countered very well to get possession of the ball.
3:30 PM2 months ago

HYDRATION PAUSE! The referee pauses the match for the 22 players on the field to hydrate and continue the match.
3:27 PM2 months ago

Getafe is saved! A dangerous arrival by Real Zaragoza through Fran Gámez, however, no home player was able to contact the ball and send it to the back of the net.
3:22 PM2 months ago

Foul on A. Francés in the first quarter of the field
3:20 PM2 months ago

The first fifteen minutes of this first half have gone by, and so far both teams have reached the back line a lot but have not been able to score properly.
3:17 PM2 months ago

Dangerous arrival for Getafe! Enes Ünal arrived dangerously from the left flank but the cross passed too quickly to be contacted in the area.
3:11 PM2 months ago

Shot that goes over the crossbar! Good direct shot by Zapater that Conde deflects to a corner.
3:07 PM2 months ago

First dangerous arrival for Zaragoza, Narváez passes to Iván who cannot finish the play when his shot is blocked by a defender.
3:03 PM2 months ago

The whistle blows and the ball rolls! The match kicks off from the La Romareda stadium in Zaragoza, Spain.
2:54 PM2 months ago

In a few moments we will start with the broadcast of Real Zaragoza vs Getafe for the Lapetra Trophy.
2:50 PM2 months ago

The local players take the field to warm up before the start of the match. 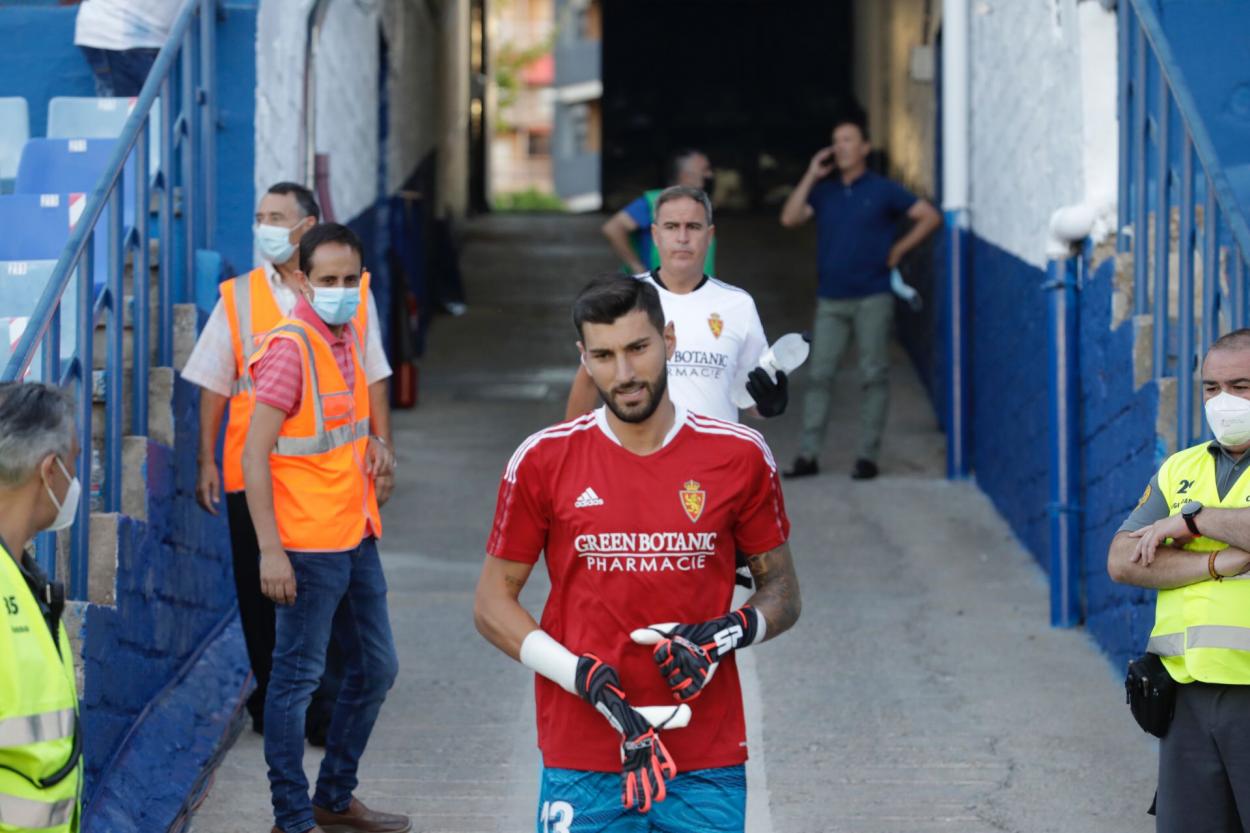 There is still one more commitment left!

After facing Real Zaragoza, the Blue and Whites will face their last match of the preseason against Brighton at the Falmer Stadium.

Little by little they are coming home!

A few minutes to go before the ball starts to roll from the lawn of La Romareda and gradually begin to fill the stands of the enclosure.

He arrives to reinforce Geta!

On Monday, Getafe announced the signing of Sandro Ramirez for the start of La Liga Santander 21-22 with the aim of transcending this season.

Keep the trophy at home!

These will be the eleven chosen by the lions' coach to defend the Lapetra Trophy tooth and nail.

In this way, the eleven men of the Club who play in the first division will defend the blue and blues shield:

After a year and a half, the public will once again fill the stands of La Romareda to support the team they love: Real Zaragoza.

The Real Zaragoza squad officially presented the home jersey that they will wear for the upcoming campaign. Likewise, with the slogan "Return to roar", the lions will use it for the first time this day in their match against Getafe.

The Blues are back!

The squad coached by Michel Gonzáles returns to action in a venue full of people, and it will also be a great match to strengthen their confidence as there is a trophy at stake.

A trophy at stake!

The Zaragoza City Trophy - Carlos Lapetra Memorial will be played against the First Division team this afternoon at La Romareda, which will have a 75% capacity in the stands after a year and a half without public.

Do not miss a detail of the match with the live updates and commentaries of VAVEL. Follow along with us all the details, commentaries, analysis and lineups for this Zaragoza vs Getafe match.
1:54 PM2 months ago

What time is Zaragoza vs Getafe match for international friendly?

This is the start time of the game Zaragoza vs Getafe of 4th August in several countries:

On the lions' side, Fran Gámez López could be the player who puts the weight on the scales in Zaragoza's favor. The new member of the Wasps' family has scored twice, in fact, the effectiveness at the moment favors him since he has scored in two out of three games played. Likewise, the right back has played most of his career in the Spanish silver and bronze league, however, he is one of the most experienced men in the defensive zone, so he could be a great factor in the match.

Enes Ünal will be the player to watch during this match by the azulones, the Turkish-born striker could be a determining factor in the 90 minutes as he has played three of the five preseason matches as a starter, in addition, the born attacker has drilled the net on three occasions. Likewise, Ünal already has experience in Spanish soccer since his arrival in the 2017-2018 season and since then he has played 126 duels, scored 22 times and participated in 10 assists so he could make a difference in this duel. 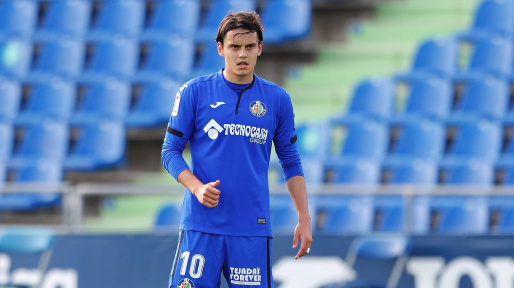 Historically, both teams have faced each other numerous times, with a total of 23 matches in which Getafe has won 8 times, they have drawn 7 times and on 8 occasions it was Real Zaragoza who came away with the glory on the pitch. The last clash between them dates back to the 2020-21 season, precisely in a friendly, on that occasion it was Zaragoza who came out victorious with a score of 2-0. Likewise, these duels are usually accompanied by emotions, as there have only been two scoreless draws, so it is very likely that the goal will not be missing in this head-to-head. 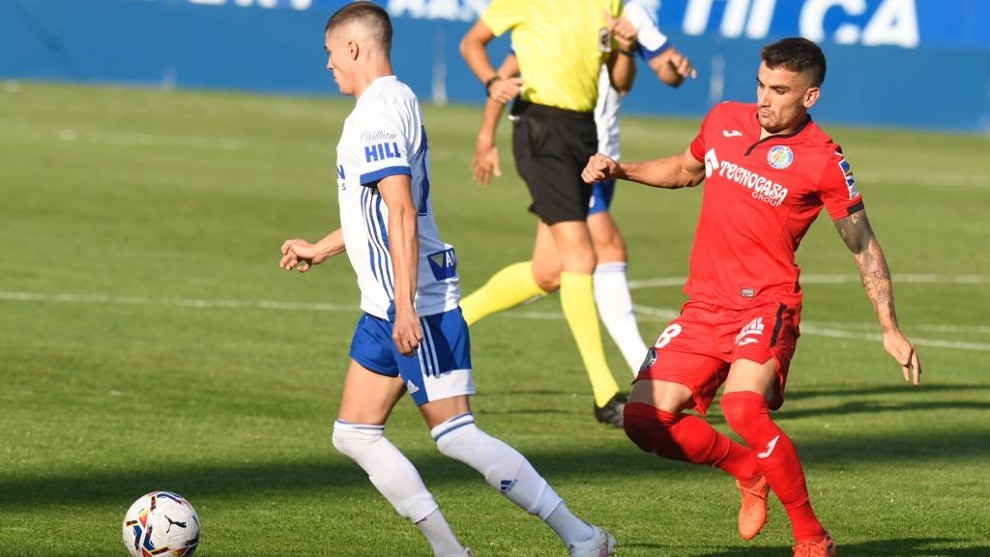 The penultimate and we're off

The Zaragoza team will have its last two opportunities to fine-tune details for the start of the 21-22 season in the silver league. The team is coming from a hard-fought draw against Atromitos (the same rival that Getafe faced) and a 2-0 win over Valencia. The match against the azulones will be their penultimate match and two days later they will face UD Ibiza, a match that will end the preseason stage, so this week will be full of action for the Blancos.

Aiming for the top

Getafe's squad has been having a good preseason so far, on July 16 they started off with a 1-0 victory over UD Ibiza, defeated Rennes 2-1, won against Atromitos conceding 3 goals and six days later defeated CF Fuenlabrada by the minimum at the Fernando Torres Stadium. Likewise, in their last 5 matches, the blue and whites have only drawn once and have won 4 consecutive victories, so a victory against the Zaragoza team could sow security and greater confidence in the Spanish team.

Fine-tuning details prior to the start of the season

The azulón team continues to prepare for the start of the Liga Santander in Spain, with two more friendly matches to play, the team coached by Michel Gonzáles seeks to continue polishing imperfections that arise from these matches. On the other hand, Zaragoza is also starting its preseason with a defeat, a win and a draw, and the Spanish second division team is about to start the path to promotion, so this match will be a very good test for the lions.
1:09 PM2 months ago

The Zaragoza vs Getafe match will be played at La Romareda Stadium, in Zaragoza, Spain. The kick-off is scheduled at 14:00 pm ET.
1:04 PM2 months ago

Welcome to VAVEL.com’s LIVE coverage of the 2021 international friendly: Zaragoza vs Getafe!