Sebastián Saucedo scores the last penalty to send the universitarios into the Leagues Cup Semifinal
1:19 AMa month ago

Gonzalez saves again and Saucedo will have the chance to score
1:14 AMa month ago

The teams have only managed to score two penalties on each side and the game will now go to sudden death.
1:09 AMa month ago

Erick Lira puts the Pumas back in the game
1:04 AMa month ago

Ismael Tajouri-Shradi misses it and ties the circumstances.
12:49 AMa month ago

Valentín Castellanos is the first one to charge in front of González and with a powerful shot he gives the home team the lead.
12:39 AMa month ago

At the end of regular time, the teams tied 1-1, the result of the match will be defined in a series of penalty kicks.
12:34 AMa month ago

Castellanos crosses too much and misses the winning goal
12:29 AMa month ago

NYC changes Jesus Medina and Santiago Rodriguez are out, Thiago Andrade and Ismael Tajouri-Shradi are in.
12:24 AMa month ago

Great save! Johnson makes a perfect save to prevent the Universitarios' second goal.
12:19 AMa month ago

GOOOOL. The equalizer came at the feet of José Rogeiro.
12:09 AMa month ago

Favio Álvarez out, Washington Corozo in.

Thorarinsson receives a second concussion protocol, the match is restarted with a boat on the ground.
11:59 PMa month ago

GOAL. Maxi Castellanos heads in a corner kick to give New York City the leadvv
11:54 PMa month ago

Goal. Santi Rodriguez heads in alone in front of the goalkeeper to give NYCFC the lead.
11:39 PMa month ago

The universitarios' goalkeeper is complaining of lower back pain. The medical assistants are already on their way to attend to him.
11:14 PMa month ago

Keaton Parks gives the New Yorkers the lead by keeping it in the right corner of the net. The play will be reviewed by VAR.
11:04 PMa month ago

Medina tries a shot from half distance and Julio Gonzalez manages to scratch the ball. Corner kick for NYCFC
10:54 PMa month ago

Castellanos shoots a right-footed shot and sets up the first attacking goal for the New Yorkers.
10:49 PMa month ago

The ball is rolling on the field at Yankee Stadium.
10:44 PMa month ago

The teams are already in the center circle. We are seconds away from kickoff
10:39 PMa month ago

The teams finally take the field at Yankee Stadium to warm up with just minutes to go before the game's opening whistle. The stadium staff removes the protective rain cover from the field that was covering the grass.

After Yankee Stadium was affected by the threat of a thunderstorm, the match between New York City and Pumas was initially postponed for 20 minutes, which later became almost exactly three hours late. According to the latest Leagues Cup press release, the match will now kick off at 10:00 CET.
10:29 PMa month ago

The game will kick off at 10:00 PM in Mexico City time according to official information from New York City.

The auriazules shared on their social networks that they are still waiting for indications for the starting whistle. 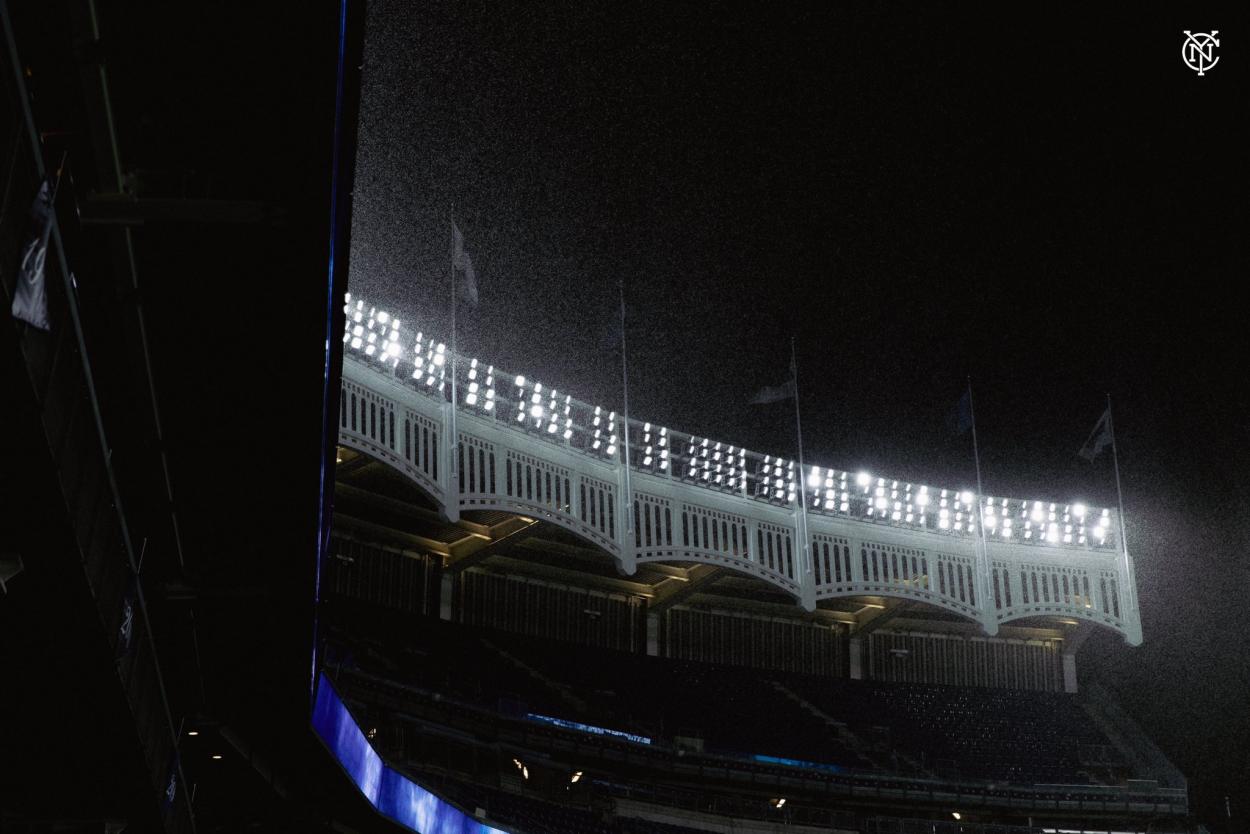 Kicking it in the clubhouse ✌️

The weather situation has not improved and the game still cannot start.

Fans have had to take shelter in the roofed areas of Yankee Stadium. 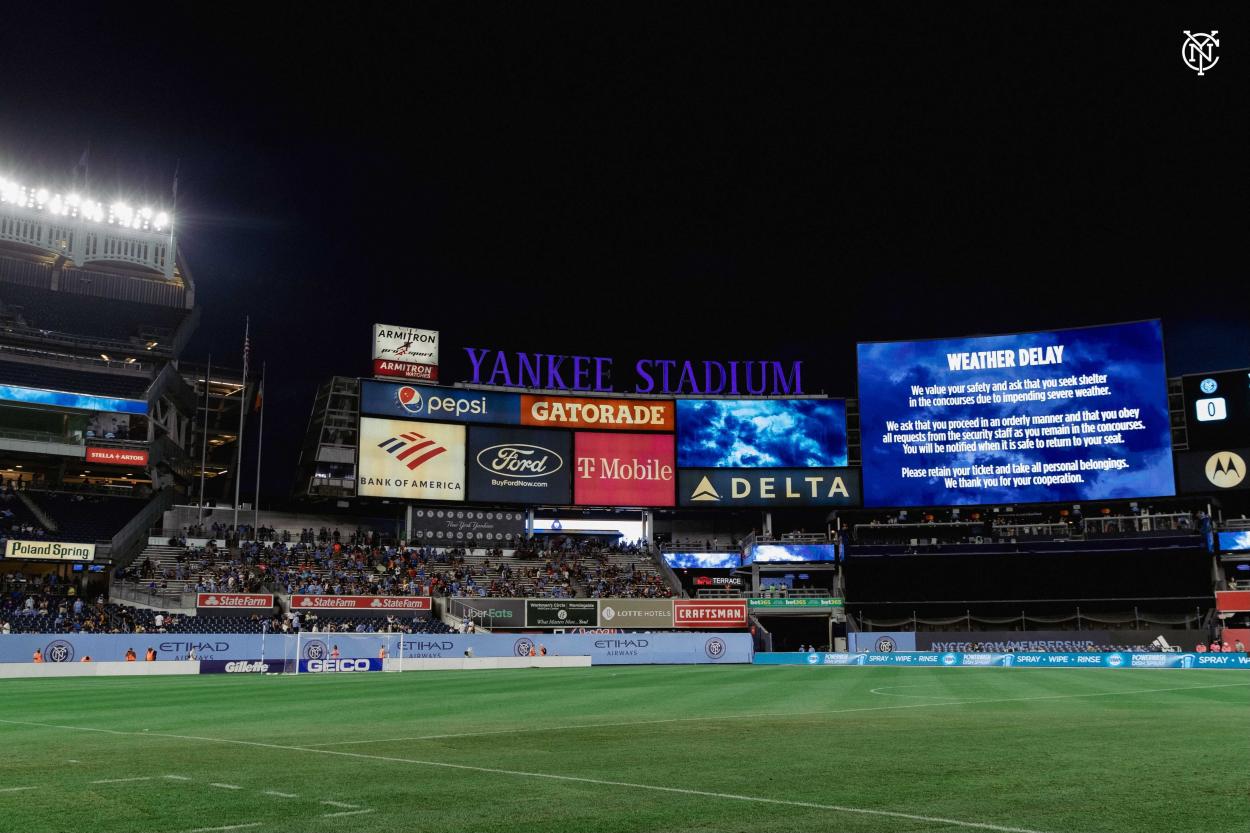 Efraín Juárez, a Mexican soccer player who debuted with Pumas, is now an assistant coach at NYCFC and in an interview with TUDN, he admitted to having mixed feelings:

Mixed feelings, Pumas is the institution to which I owe myself, it raised me as a professional player, it gave me the opportunity to debut, to fulfill my dream since I was a little boy, to play soccer, the affection and love and the first love is never forgotten, it is there, but today I really have to be honest, I owe myself to another institution that gave me the opportunity to change of scenery, to be a soccer player, to belong to a coaching staff, really mixed feelings but with desire and illusions that we can make a good game," mentioned Juarez.

The Auriazul fans demonstrate that the university club is one of the most popular in Liga MX and its fans are present in international scenarios. Here is a sample of the fans who came out to cheer at Yankee Stadium. 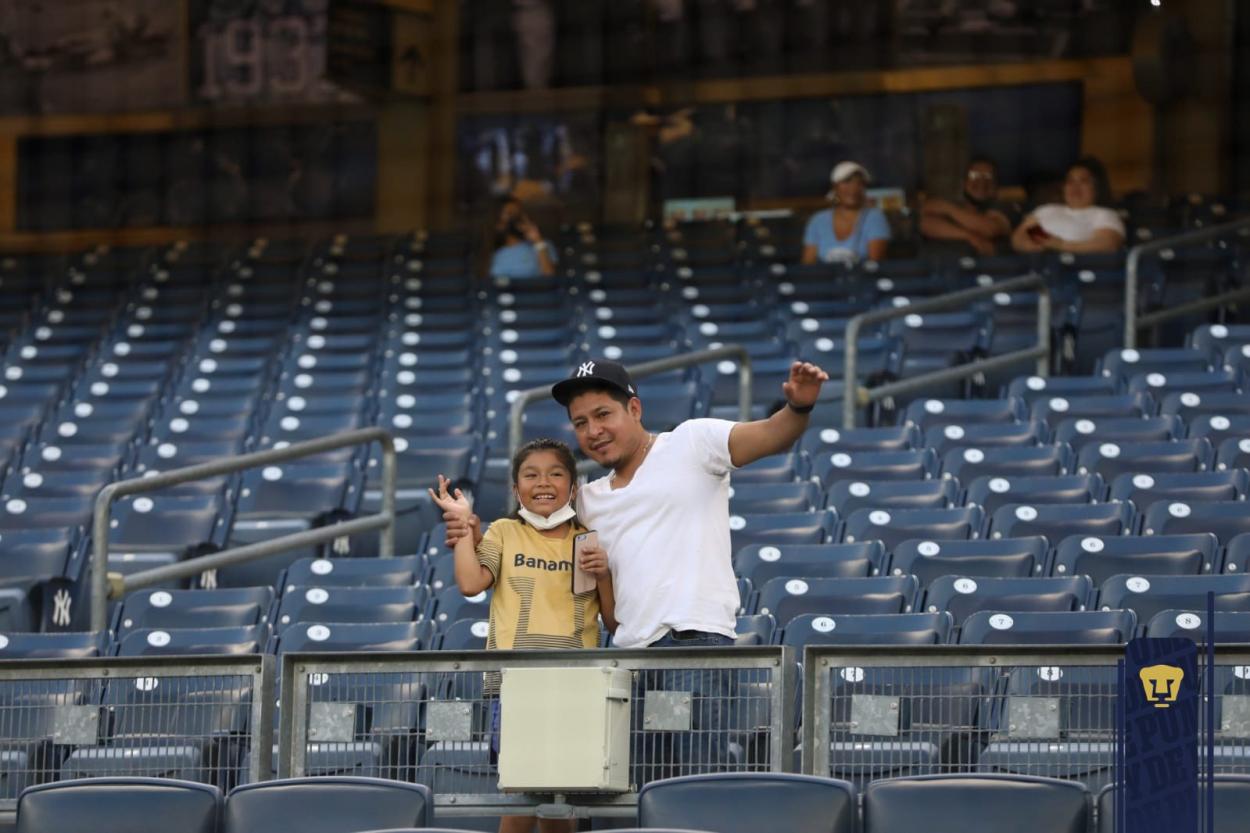 We love this game ⚽️💙 pic.twitter.com/nJOT2lvPUg

Due to a threat of a thunderstorm in the Yankee Stadium area, the game time has been rescheduled by twenty minutes. Kickoff will be at 7:20 pm.
9:34 PMa month ago

We are just minutes away from the start of the match between New York City and Pumas UNAM in the Leagues Cup. Each team will be looking to represent their league in the best way possible. For Pumas, it is a good opportunity to return to the important titles and finals that have been difficult for them in their local league.
9:19 PMa month ago
9:14 PMa month ago
9:09 PMa month ago

Do not miss a detail of the match New York City F.C vs Pumas live updates and commentaries of VAVEL.
9:04 PMa month ago

How to watch New York City F.C vs Pumas Live Stream on TV and Online?

If you want to watch the game New York City F.C vs Pumas live on TV, your options is: ESPN y TUDN.

What time is New York City FC vs Pumas match for Leagues Cup ?

This is the start time of the game New York City F.C vs Pumas  of 11th June 2021 in several countries:

Thiago has excelled at youth levels, mainly in Bahia's youth teams, where he was the best goal scorer and was later promoted with them to the Brasileirao A Series. Before that, he also played in Portugal for Portimonense, but that stage lasted six months, while in his growing club he was able to get into the starting eleven. Thiago arrived at NYCFC in January of this year and is expected to have a goal-scoring quota with the team from the Big Apple. 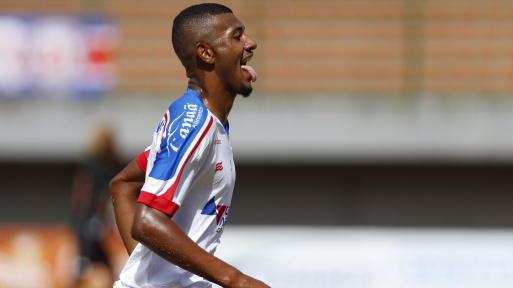 Juan Ignacio Dinneno has become one of the auriazules' most important players since his arrival.

On January 21, 2020, he officially signed with Club Universidad Nacional, better known as Pumas de la UNAM of Liga MX. In the second leg of the round of 16 of the Copa Mexico, he scored his first goal with the club, against Club Santos Laguna. In his first year with Club Universidad Nacional he scored 16 goals, being the team's top scorer for the last 6 months and runner-up in his second tournament with the universitarios. 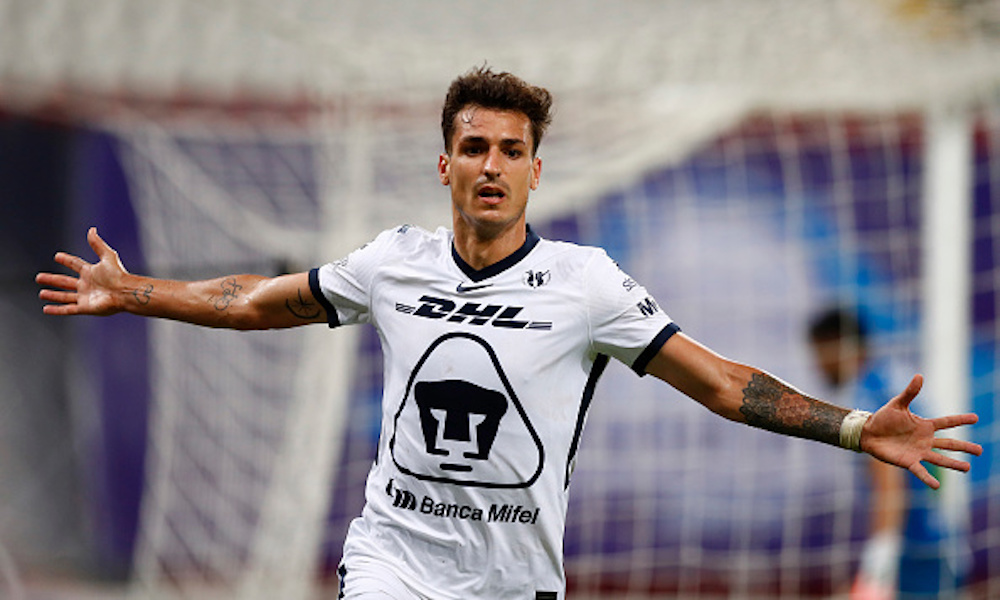 The universitarios have not had the best start to GritaMexico 2021 and are in 16th place in the general table. Of the three games played, they have lost on two occasions and rescued a draw. With just one unit, they already have a goal difference of -4.
8:39 PMa month ago

NYCFC is joined in Leagues Cup 2021 by MLS teams Seattle Sounders, Sporting Kansas City and Orlando City SC, while Tigres UANL, Leon and Santos Laguna round out the LigaMX participants.
8:34 PMa month ago

The New York squad comes into this match as third in the MLS Eastern Conference table. With 17 games played, they have a record of eight wins, four draws and five defeats. With a total of 28 points they are chasing New England and Orlando City.

Opened in 2009, it supplanted the stadium of the same name that operated from 1923-2008, and was attached to the current stadium on its south side.

Overall, Yankee Stadium has features reminiscent of the old ballpark,1 albeit 63 percent larger plus several modern additions. It is the most expensive facility ever built in the history of baseball, and the second most expensive sports venue in the world behind Wembley Stadium.

Leagues Cup is a friendly soccer tournament played between Major League Soccer and Liga MX clubs. The first edition of the tournament began in July 2019 and the grand final was played in September of the same year. Although the competition has the endorsement of Concacaf to take place, as it is not organized by that confederation, it is not considered official as required by FIFA statutes.
8:19 PMa month ago