Thank you here on VAVEL for listening to another Eredivisie match. Have a good afternoon and see you next time!
2:37 PMa month ago

With goals from Bruma and Madueke, PSV wins the match and takes its first three points in the competition!
2:35 PMa month ago

Propper found Zahavi in the middle, who shot hard and sent it to a good save from the goalkeeper.
2:31 PMa month ago

André Ramalho received the cross and tried to head it, but over the goal.
2:25 PMa month ago

Sangaré risked his right footed shot and Bucker deflected it away!
2:23 PMa month ago

André Ramalho is yellow carded for a strong foul.
2:16 PMa month ago

PSV change: Madueke goes out, Gakpo comes in. And Quataglia receives a yellow card for a hard foul.
2:09 PMa month ago

Now it was Madueke's turn to take a chance and send it into the back of the net, increasing the score!
2:08 PMa month ago

Bruma received a good pass from Gotze and finished off, over the goal! And for PSV, Vertessen left for Zahavi.
1:56 PMa month ago

Teze tried to finish the job and sent it away on the right side.
1:51 PMa month ago

The players are already on the field for the start of the second half. For Heracles, Jakobsen is out, and Laursen is in. PSV went out Mauro Junior and Gotze came in. and the ball is already rolling for the second half of the match!
1:35 PMa month ago

With Bruma's goal PSV goes into the break winning the match!
1:34 PMa month ago

Bruma risked the shot and sent it wide, after the ball exploded off the post!
1:30 PMa month ago

Bruma got a good move and shot with his right hand, hard, in the middle of the goal to beat Bucker and open the score!
1:24 PMa month ago

Sinan Bakis now sent the ball into the goal, in a right-footed shot, and forced Mvogo to make a good save in the middle of the goal!
1:23 PMa month ago

Sinan Bakis risked the shot, but without any danger for Mvogo.
1:22 PMa month ago

Another yellow in the match, now for Mauro Junior.
1:18 PMa month ago

Once again Propper tries to shoot, but sends it wide of the goal.
1:17 PMa month ago

We now have a yellow card for Fadiga.
1:16 PMa month ago

From a high cross, Yorbe managed to get a header, but sent it wide of the goal.
1:06 PMa month ago

Propper got the finish, but the ball went into Bucker's hands.
1:05 PMa month ago

Basacikoglu got the first shot of the match, but it went wide!
1:05 PMa month ago

The ball rolls with Herecles' first Eredivisie match of the club season!
1:04 PMa month ago

Team on the field

The teams are already on the field for the ball to roll!
12:30 PMa month ago

At 8:30am Utrecht plays against Spoarta Rotterdam and Zwolle plays against Vitesse. Willem face Feyenoord in the last game of the day.
12:29 PMa month ago

The Eredivisie is in its first round just like many European leagues you can follow here on VAVEL. The first match was yesterday, with Heerenveen beating the Go Ahead Eagles 1-0.
12:28 PMa month ago

PSV is ready for the match and comes with:

Heracles is ready for the match and comes with: 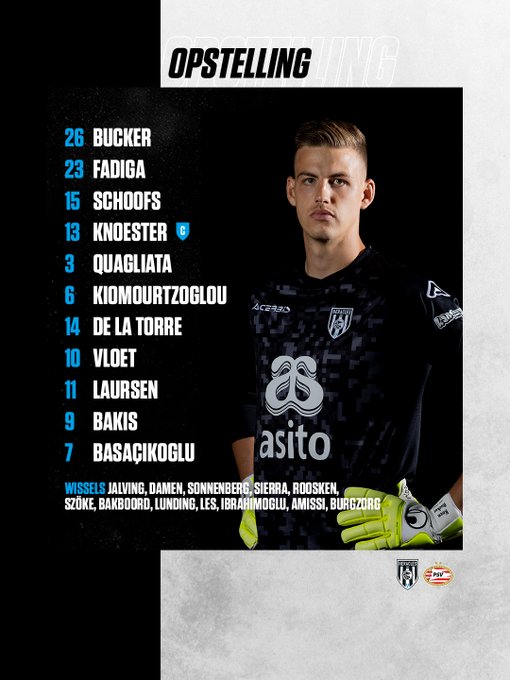 Welcome to the broadcast of the Eredivisie first round match between Heracles and PSV, kicking off at 13:45!
11:45 PMa month ago

Do not miss a detail of the match with the live updates and commentaries of VAVEL. Follow along with us all the details, commentaries, analysis and lineups for this Heracles vs PSV match.
11:40 PMa month ago

How to watch Heracles vs PSV Live in TV and Stream

If you want to watch the game Team 1 vs Team2 live on TV, your options is: ESPN+.

Delanghe and Kreels are out of the match for PSV, both injured, as are Polley and Oubella. The former is injured and the latter has chances to return to the team.
11:20 PMa month ago

In the 2020-21 Eredivisie, PSV finished the season in second place with 72 points, followed closely by AZ with 71. The champion was Ajax, with 88 points. Heracles, on the other hand, scored 44 points, ending the competition in ninth position.
11:15 PMa month ago

PSV has already started its season with games in the qualifying stage for the Champions League group stage. Against Galatasaray, in the first match, a 5-1 victory gave them peace of mind. Zahavi, with three goals, and Gotze, with two, were the top scorers. Kiliniç pulled one back for the Turks. In the return, Madueke and van Ginkel scored for PSV, which won 2-1. Diagne scored for Galatasaray.

Welcome to VAVEL.com’s coverage of the 2021-22 Eredivisie match: Heracles vs PSVLive Score!