It's over! Puebla earns its first win of the season
12:07 AM2 months ago

Great play by Tabó, who ends up overflowing, gets in a cross, but the player ends up giving the ball to Aguerre.
12:04 AM2 months ago

He's leaving! Alexis Doldán is sent off after a hard stomp on Escoto.
12:03 AM2 months ago

VAR! The referee will review a foul by Doldan on Amaury Escoto.
12:02 AM2 months ago

Change of Puebla. Aristeguieta leaves due to concussion and Pablo Parra takes his place.
11:55 PM2 months ago

Goalkeeper! Puebla was looking for the second, but Aguerre saves the goal from the second one
11:44 PM2 months ago

Ferraréis's cross that Tabó fails to make contact with inside the Albiazul area.
11:41 PM2 months ago

Querétaro continues to try to tie the match.
11:27 PM2 months ago

Goal by Puebla! Great collective play by the home team that ends with Álvarez's shot on goal, opening the scoreboard.
11:20 PM2 months ago

Dangerous shot by Diego de Buen, but Washington Aguerre comes back well and ends up saving the shot.
11:16 PM2 months ago

The second half kicked off in Puebla.
11:16 PM2 months ago

The first part is over! The first forty-five minutes are over with two goals disallowed for Querétaro and the score at zero.
10:58 PM2 months ago

Always no! The goal is disallowed! The referee signals another offside and the score returns to zero.
10:56 PM2 months ago

Goal, goal, goal for Querétaro! Jonathan Dos Santos appears inside the box after Silva deflects Ramírez's shot and the ball ends up in the back of the net.
10:51 PM2 months ago

Jonathan Dos Santos scored the first with a header, but the referee flagged for a clear offside.
10:49 PM2 months ago

Salas' shot, but the ball bounces off the visiting defense.
10:45 PM2 months ago

Excellent run by Ramírez, but Dos Santos fails to close properly and Silva ends up clearing the ball.
10:40 PM2 months ago

Goalkeeper! Antonny Silva saves with one hand, then the referee signals offside.
10:37 PM2 months ago

Barrera's cross, but Dos Santos fails to hit the ball with much force and misses a clear chance.
10:32 PM2 months ago

A good save by Escamilla, who sweeps in and ends up clearing the ball away from Araújo.
10:20 PM2 months ago

Close! Great play by Ramirez who crosses into Silva's area, but Nico Sosa can't get a shot off.
10:17 PM2 months ago

A lively start to the match in Puebla, with both the home team and Querétaro reaching their opponents' goal.
10:11 PM2 months ago

The match kicks off at the Cuauhtémoc stadium in Puebla.
10:04 PM2 months ago

Of the duels between Puebla and Querétaro, there have been 12 wins for Puebla, while Gallos have won 8 duels.
9:48 PM2 months ago

Puebla and Querétaro take to the field to warm up before the start of the match, which is expected to be a lively duel.
9:28 PM2 months ago

Both teams have already arrived at the Cuahtémoc, where they will be looking for their first victory of the tournament and to climb out of the bottom of the general table.
9:22 PM2 months ago

Despite being announced in midweek, Leonardo Ramos will not be on the bench tonight. Querétaro will be coached by U-20 coach Juan de la Barrera and his assistants will be Gabriel España and Olaf Heredia.
9:15 PM2 months ago

Querétaro has gone four games without a win against Puebla, three of these matches have been ties and one win, which gives the Albiazul squad confidence.
9:10 PM2 months ago

The last duel between Querétaro and La Franja that ended in Puebla's favor was in the Clausura 2019, when Yohandry Orozco scored the only goal, which was the winning goal for Puebla.
9:05 PM2 months ago

Stay tuned for the Puebla vs Queretaro live stream

In a few moments we'll share with you the Puebla vs Queretaro live starting lineups, as well as the latest information from the Estadio Cuahtemoc. Stay tuned to VAVEL's minute-by-minute live online coverage of the match.
9:00 PM2 months ago

How to watch Puebla vs Queretaro Live Stream on TV and Online?

If you want to watch the game Puebla vs Queretaro live on TV, your options is: TUDN.

After announcing his arrival at Querétaro, Leonardo Ramos was introduced and spoke to the media: "It will depend on us to reverse the situation. We can always do better, that's the reality. There are many games ahead. I know that the team has not performed well, but we feel that we can contribute a lot to the institution and we will make the most of this opportunity".
"I try to be a coach who gives a lot of intensity, to be aggressive in all phases of the game, we like to arrive with a lot of people to offensive situations of definition and you will see in the match some change we have made."
"We went to training and found a squad with a very good predisposition, eager to work and to improve the moment they are going through and this can only be reversed with work."
8:50 PM2 months ago

Nicolás Larcamón spoke to the media, where, among other things, he confirmed the arrival of Dieter Villalpando from Chivas. He also touched on the match against Querétaro: "This Friday's match has the feeling of a final. In this job, you know that you are in charge of a team's sporting interests, in that sense you must know how to lead this moment and this tournament. I am focused on the fact that starting on Friday we will be able to reverse the situation and achieve this victory, which I feel will have a very positive effect on the team.
8:45 PM2 months ago

Querétaro has not had a great tournament either, accumulating three defeats and three draws. Gallos' last match ended in a 3-nil drubbing by Tuzos. The defeat ended with the departure of Héctor Altamirano from the team's technical direction. 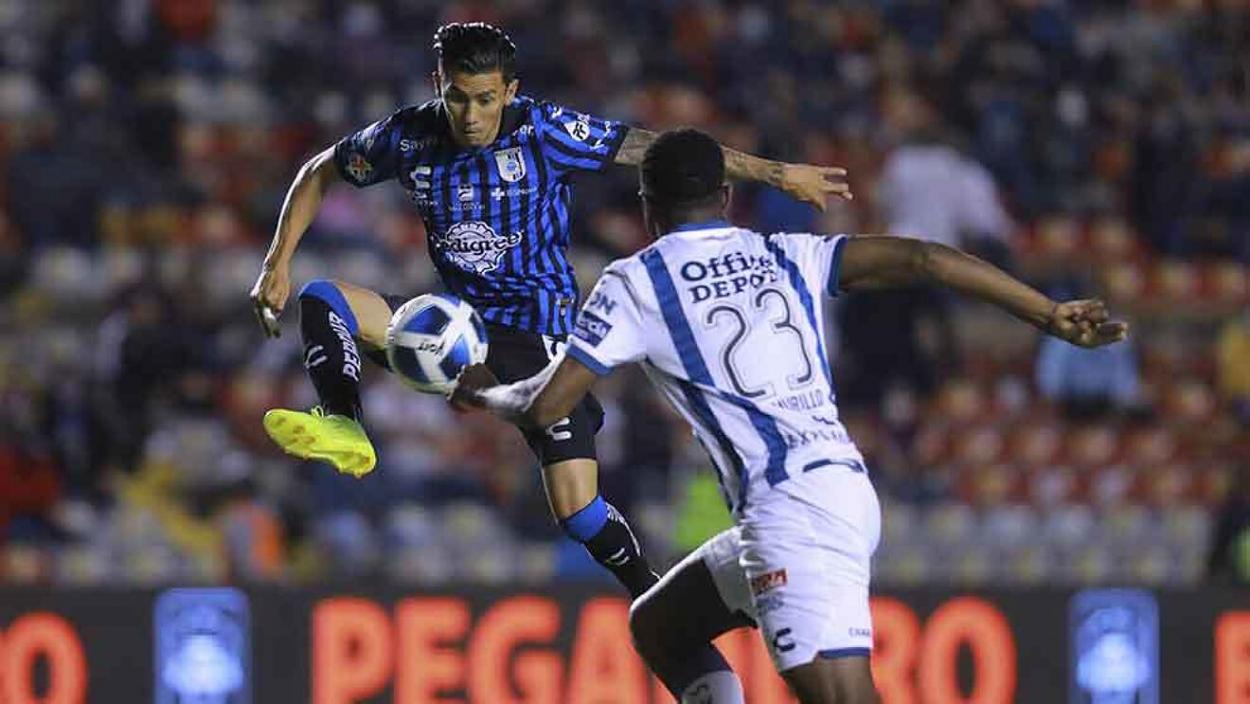 They are not getting back on their feet

After disbanding and not bringing in many reinforcements, Puebla has still not managed to get back on its feet and its last Liga MX match was against Pumas at CU, a game in which they lost with two goals against. The team coached by Larcamón has not managed to win in this tournament and has accumulated three draws and three defeats, placing them in fifteenth position.
8:35 PM2 months ago

The game will be played at the Cuauhtémoc Stadium.

The Puebla vs Querétaro match will be played at the Cuauhtémoc stadium located in Puebla; with a capacity of 47,417 people. The match will be attended by a percentage of the fans, but will not be a sellout.
8:30 PM2 months ago

My name is Adrian Hernandez and I’ll be your host for this game. We will provide you with pre-game analysis, score updates, and news as it happens live here on VAVEL.