Thank you here for your audience in this Portuguese Championship match. Have a good afternoon and see you next time!
2:57 PM25 days ago

Benfica wins against Tondela and keeps its 100% in the Portuguese Championship!
2:52 PM25 days ago

And we will have seven more minutes of extra time in the match.
2:48 PM25 days ago

João Mário found Gilberto inside the area, who took two defenders and hit the left corner, on the ground, to beat Niasse and turn the game and make the party of Benfica fans!
2:41 PM25 days ago

Substitution in Tondela: Undabarrena is out for Murillo.
2:38 PM25 days ago

Triple substitution in Tondela: Agra, Daniel and Tiago Almeida left for Roberto, Dadashov and Rafael Barbosa. At Benfica there was one, where Gonçalo Ramos left to enter Seferovic.
2:31 PM25 days ago

In the corner kick, being the fourth in a row, João Mário played it to the first post, with a deviation, and Rafa arrived to finish and put it in the back of the goal, equalizing the match!
2:28 PM25 days ago

Grimaldo gave a beautiful heel touch to Cebolinha, who arrived knocking Niasse to the corner!
2:23 PM25 days ago

Substitution in Benfica: Darwin Nuñez is out for Rodrigo Pinho.
2:22 PM25 days ago

Grimaldo lifted a free-kick into the box and Weigl's header deflected off the left side of the goal.
2:18 PM25 days ago

Yellow for Undabarrena, for holding Benfica's striker in midfield.
2:16 PM25 days ago

Everton Cebolinha kicked hard from outside the area and sent it to the left side of the goal!
2:14 PM25 days ago

Gonçalo Ramos received on the right and finished strong, but Niasse sent it for a corner, which was beaten and had a direct hit on the head for a goal kick!
2:09 PM25 days ago

In the cross in the area Gilberto headed and Niasse deflected, but Darwin, on the rebound, headed over the goal!
2:09 PM25 days ago

Agra gives the first touch on the ball and it rolls into the second half
2:08 PM25 days ago

Temas on the pitch

The players appear on the pitch to start the second half. And in Benfica Meite, Pizzi and André Almeida left the team for Weigl, Rafa and Gilberto.
1:49 PM25 days ago

With Agra's goal, Tondela beat Benfica away from home and take the three points!
1:45 PM25 days ago

A corner was taken and there was a weak deflection, sending the ball into Niasse's hands.
1:44 PM25 days ago

João Mário killed the ball, invaded the area and hit it hard, but Niasse sprawled, sending it over the goal!
1:35 PM25 days ago

Darwin took another chance and sent it over the goal!
1:34 PM25 days ago

Darwin hit hard from outside the area, but sent it into the hands of Niasse.
1:23 PM25 days ago

Down the right Agra received in the area and hit a cross, beating goalkeeper Odysseas and sending it into the net, opening the score!
1:20 PM25 days ago

The ball was taken short and there was a cross, straight to the side, with a deflection and for Benfica.
1:20 PM25 days ago

Everton Cebolinha was going down the right and won a foul. Yellow for Khacef and danger in the area!
1:14 PM25 days ago

Grimaldo crossed from the left and Darwin threw himself on the ball along with the defender, winning an already taken short corner kick.
1:10 PM25 days ago

Yellow for Pizzi in the midfield for a strong foul.
1:03 PM25 days ago

Pizzi received on the right and tried a cross, but ended up playing into Niasse's hands.
1:01 PM25 days ago

Darwin takes the first touch on the ball and it rolls into the first half of Benfica and Tondela!
12:58 PM25 days ago

The teams take the field at the Stadium of Light to start the match!
12:47 PM25 days ago

The players leave the pitch to finish their preparation and then return to the field for the ball to roll!
12:44 PM25 days ago

At the same time we have Braga-Vitoria and at 4:30 pm we have Santa Clara-Gil Vicente and Portimonense-Pacos de Ferreira.
12:44 PM25 days ago

The players take to the field to begin their warm-up exercises.
12:28 PM25 days ago

The curiosity is that at home, Benfica received Tondela six times, won four, drew one and lost one, being undefeated away from home.
12:28 PM25 days ago

There have been 12 matches between Benfica and Tondela, with 10 wins for Benfica, one draw and one win for Tondela, all of which were Portuguese Championships matches.
12:21 PM25 days ago

Tondela comes with news for the match, going with Tiago, Undabarrena, Pedro Augusto and Neto Borges in the midfield.
12:21 PM25 days ago

Tondela is scheduled for the match and comes to the field with: Niasse, Jota, Quaresma and Chacef; Tiago, Undabarrena, Pedro, Pedro Augusto and Neto Borges; Agra and Daniel.
12:17 PM25 days ago

Benfica comes with news for the match. Starting in the defense, where André Almeida will be lateral, with Vertoghen in the defense. In the middle Meite enters, along with Pizzi, Everton and Gonçalos Ramos. Darwin starts in the attack.
12:17 PM25 days ago

Benfica has a line-up for the match later today: 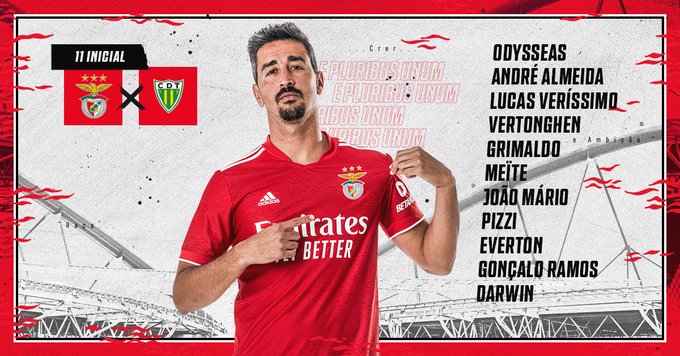 Now begins the broadcast of the Primeira Liga match between Benfica and Tondela!
4:33 PMa month ago

Do not miss a detail of the match with the live updates and commentaries of VAVEL. Follow along with us all the details, commentaries, analysis and lineups for this Benfica x Tondela match.
4:28 PMa month ago

How to watch Benfica x TondelaLive in TV and Stream

If you want to watch the game Benfica x Tondela live on TV, your options is: ESPN.

Benfica coach Jorge Jesus commented on the match: "And tomorrow [Sunday] we want to do the same thing, with all due respect to Tondela, which is an organized team, with fast players up front, who have a very positive game idea. The respect we have for Tondela is exactly the same as we had for PSV. But the big goal was exactly that [to make the team change its focus to the championship]. We practically don't even talk about our victory and our passage with PSV. We always talk about Tondela."
4:08 PMa month ago

Both teams should have full strength for the match, seeking victory. Benfica is still negotiating with David Luiz to be another reinforcement for the season, having this dispute with Flamengo for the defender.
4:03 PMa month ago

In the standings, Benfica is with nine points, tied with Sporting, in third and second position, respectively. The leader, already with four games, is Estoril, with 10 points. Meanwhile Tondela flirts with the relegation zone, with three points, in 13th position, tied with Paços de Ferreira, one ahead of Moreirense and two ahead of Belenenses and Santa Clara, both already in the relegation zone.
3:58 PMa month ago

Tondela comes from defeat at home, for Portimonense, by 3-0 last Sunday (22). Beto opened the scoring, Aylton increased and in the end Candé finished the score 3-0.
3:53 PMa month ago

Benfica comes from a scoreless draw with PSV away from home for the Champions League pre-qualification phase, where they managed to qualify for the group stage. And before that, on Saturday (21), against Gil Vicente, Benfica won 2-0 away from home, with goals from Lucas Veríssimo and Grimaldo.
3:48 PMa month ago