It's over!!! Mexico wins its first match with jobs against Jamaica
11:56 PM21 days ago

Goal, goal, goal for Mexico! A pass from Romo that Henry takes advantage of to shoot into the goal and give the Mexicans the lead.
11:48 PM21 days ago

Dangerous cross by Gallardo, but Blake pulls that ball out.
11:48 PM21 days ago

Orbelín's cross that Antuna fails to finish inside the area.
11:44 PM21 days ago

Change of Jamaica. Oniel Fisher is replaced by Cory Burke.
11:43 PM21 days ago

Sanchez's cross, Orbelin appears inside the area, heads the ball and Blake rejects the ball.
11:39 PM21 days ago

Blake was unable to grab the ball after stopping the shot, Córdova appeared inside the area, failed to make contact with the ball and the goalkeeper ended up keeping the ball.
11:30 PM21 days ago

Goal Jamaica! Nicholson pushes the ball into the box to tie the match
11:29 PM21 days ago

The one that just missed! Inside the box Funes Mori sends a shot that crashes off the goal, then Córdova appears but misses the ball.
11:29 PM21 days ago

Changes in Jamaica. Javon East and Junior Flemmings are replaced by Romario Williams and Norman Campbell.
11:22 PM21 days ago

Gallardo's cross, but Lawrence appears and ends up clearing the ball.
11:18 PM21 days ago

Sanchez's diving header, but he ends up giving the ball to Blake.
11:15 PM21 days ago

Close second! Great pass from Funes Mori to Alvarado, who drives and enters the area and shoots at the goal, but the ball goes wide.
11:14 PM21 days ago

Goal, goal, goal for Mexico! After the goalkeeper rejects Romo's shot, Vega appears, drives and sends a shot past Blake.
11:12 PM21 days ago

Córdova's cross that Vega tries to send into the net, but the ball ends up going wide.
11:11 PM21 days ago

The second half gets underway at the Estadio Azteca.
10:54 PM21 days ago

Lowe does a good job defensively, preventing Funes Mori from continuing on his way to Jamaica's goal.
10:46 PM21 days ago

Good rebound by Nicholson to Mexico's center.
10:43 PM21 days ago

What a thing! Romo's shot is deflected by Blake and then Funes Mori tries to hit the ball with his left foot, but to no avail.
10:42 PM21 days ago

Lowe steals the ball from Córdova and prevents him from entering Blake's area to create danger.
10:40 PM21 days ago

Córdova drove into the box and sent a shot, but the ball went just wide.
10:37 PM21 days ago

Funes Mori's cross, but Mariappa rises and heads the ball away.
10:29 PM21 days ago

Luis Romo's cross was not properly finished by Córdova and the ball went over the top.
10:28 PM21 days ago

Close! Sanchez's cross that Funes Mori fails to finish off
10:27 PM21 days ago

The game was quite hard-fought, and fouls began to appear in quick succession.
10:25 PM21 days ago

Burke stomps on Gallardo's foot and gets a warning.
10:14 PM21 days ago

Gallardo's left-footed shot ends up going over the goal
10:12 PM21 days ago

The match was quite lively in the opening minutes, with both Mexico and Jamaica having chances at the opponent's goal.
10:03 PM21 days ago

The ball is rolling at the Azteca Stadium, Mexico will seek to defeat Jamaica.
10:01 PM21 days ago

Both Jamaica and Mexico are already at the Azteca Stadium, both will be looking to emerge victorious in this duel that will kick off the FIFA and CONCACAF qualifiers. 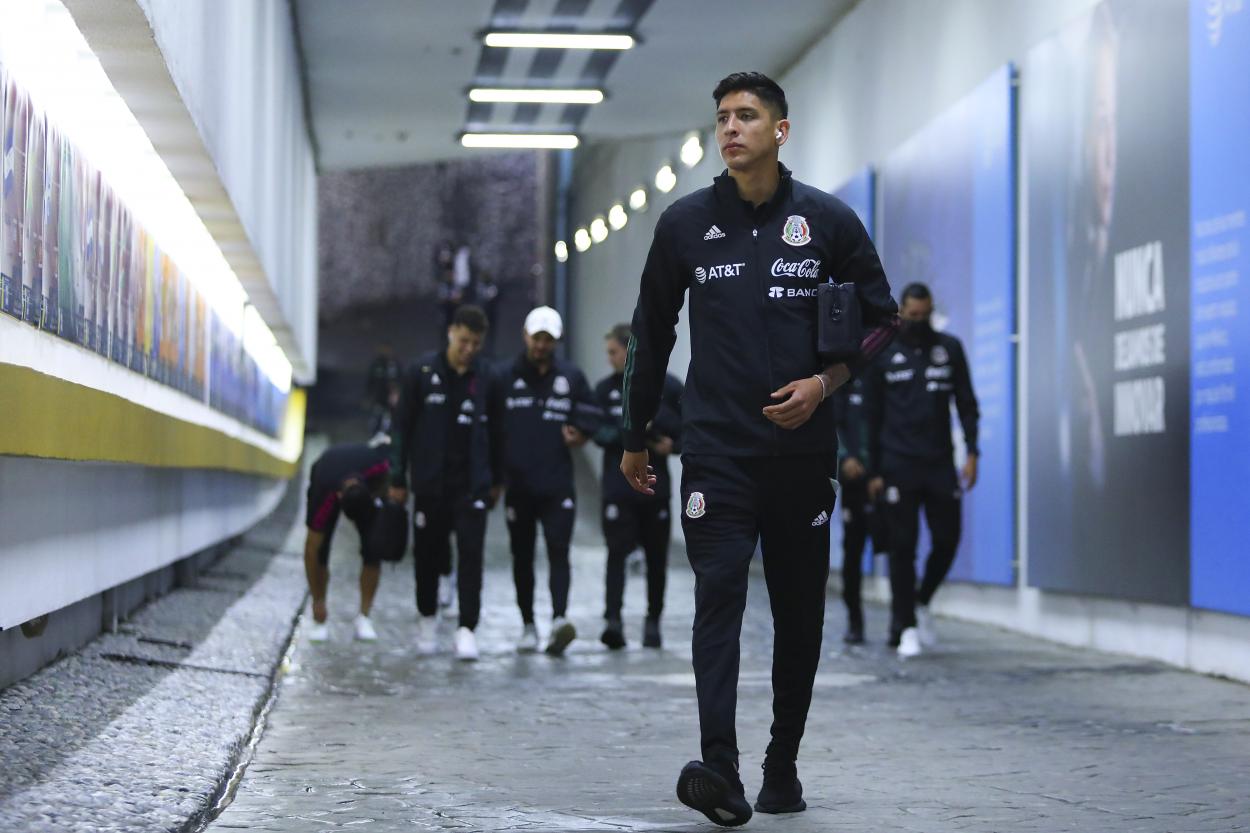 There will be no VAR

The confederation decided that the CONCACAF qualifiers for Qatar 2022 will be played without one of the most important refereeing tools. This is due to the fact that some of the stadiums that will host the games in Central America and the Caribbean do not have adequate facilities for the installation of all the equipment to use video refereeing.
9:43 PM21 days ago

In their dressing room, the Mexican national teams were greeted with messages of support from the fans. The players will play their first match of this octagonal tournament tonight. 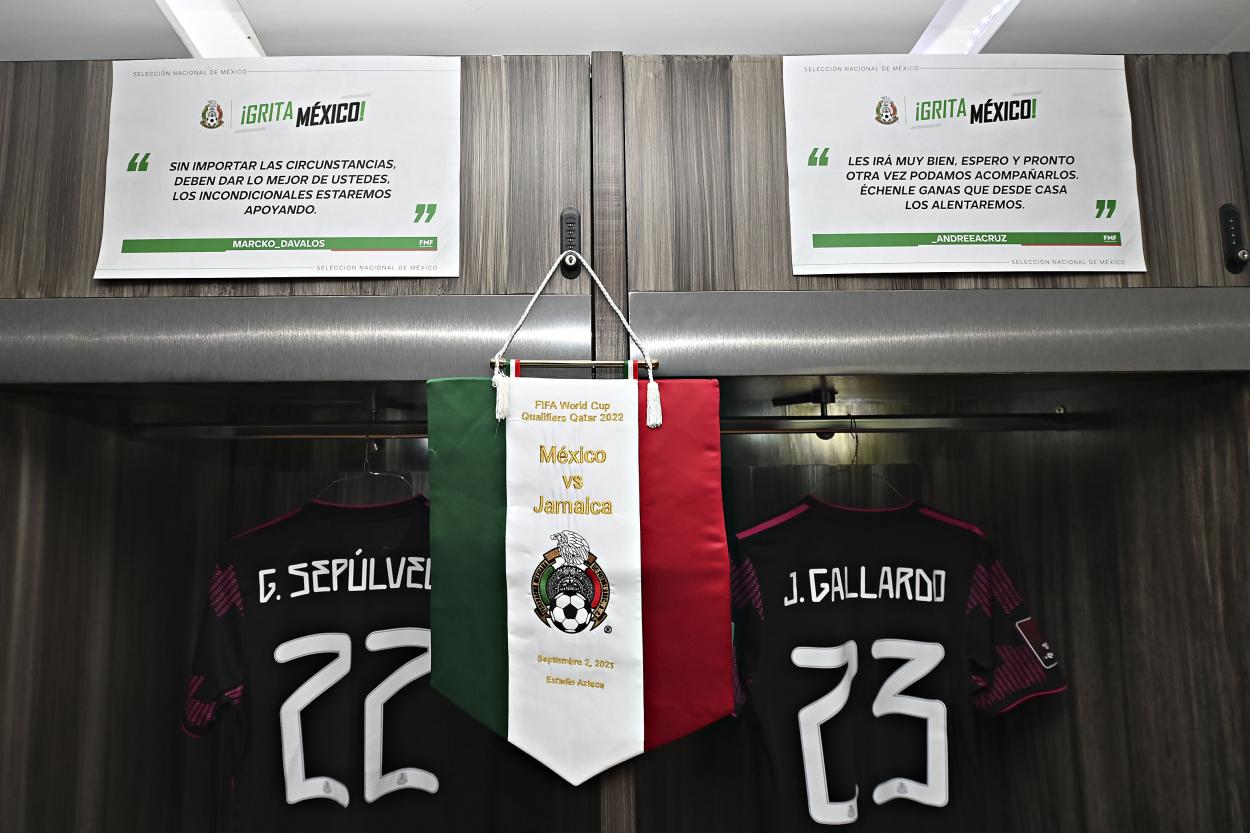 Jamaica did not manage to beat Mexico until the qualifiers for the 1998 World Cup in France. In November 1996, the Caribbeans beat Mexico by the score of Ian Goodison; these results and others culminated in the dismissal of Bora Milutinovic.
9:22 PM21 days ago

Mexico and Jamaica have faced each other 25 times, Mexico dominates with 19 wins, three draws and three defeats; in addition to this, the Tricolor has scored 63 goals, while Jamaica has only managed to score 10.
9:17 PM21 days ago

This will be the first time that Mexico will play a Qualifying Match at the Azteca without a crowd. The Tricolor had already played without fans on other occasions, but never in an official qualifying match.
9:12 PM21 days ago

David Ramírez and Santiago Giménez were called up for the first time to the Senior National Team, where they will play the first matches of the Qualifiers.
9:07 PM21 days ago

Stay tuned for live coverage of Mexico vs. Jamaica

In a few moments we will share with you the starting lineups for Mexico vs Jamaica live, as well as the latest information from the Azteca Stadium. Stay tuned to VAVEL's minute-by-minute live online coverage of the match.
9:02 PM21 days ago

How to watch Mexico vs Jamaica Live Stream on TV and Online?

If you want to watch the game Mexico vs Jamaica live on TV, your options is: TUDN.

What time is the Mexico vs Jamaica match for the Octagonal Final?

This is the kickoff time for the Mexico vs Jamaica match on September 2, 2021 in several countries:

Gerardo Martino spoke prior to today's match against Jamaica: "There are leagues where there is apparently a consensus that players should not go to certain countries that are included in a red zone, but there are also players who have played with their national team. Perhaps what is missing is a stronger decision by FIFA regarding whether or not to release players, but it must be unanimous and apply equally to all countries".

"All these imponderables that have arisen, the suspension of the admission of the public in our home stadium, injuries to players or not being able to come on behalf of others, are situations that we recognize, but they do not change our position on how to face the qualifiers and start tomorrow's match against Jamaica on the right foot, it is not pleasant to play with the Azteca Stadium empty, but it is a sanction that we have to comply with and we will move forward, hoping we can count on the support of the public at another time."

He also spoke about the absence of Raúl Jiménez in the CAR: "It is vital for us to count on him, especially because after the important injury he had, he hasn't been here for a long time. We have been in permanent contact with him and there was a great desire on his part to be at the start of the Qualifying Round; the FMF continues with the steps to follow and we will wait. I don't have a position on his chances of coming, but we always have expectations".

Mexico will be without Johan Vásquez, a player who recently arrived in Italy to sign with Genoa. Martino commented in a conference that Hirving Lozano asked not to be called up because he is still not 100% after the blow he had in the Gold Cup; Johan mentioned that he wants to adapt to his new team, in addition to Jiménez. On behalf of Vasquez and Raul, Julio Dominguez and Santiago Gimenez arrive.
8:42 PM21 days ago

After the homophobic shouts in different matches where the Mexican National Team was in action, FIFA decided to sanction the tricolor with a banned match, which will be enforced in this match and there will be no fans when Mexico receives Jamaica in its first match of the Final Octagonal.
8:37 PM21 days ago

With restrictions by various leagues to prevent their players from traveling to countries in the red zone in terms of COVID infections, Jamaica will be without eleven players, these are: Ethan Pinnock, Liam Moore, Amari Bell, Ravel Morrison, Daniel Johnson, Kevin Stewart, Bobby Reid, Leon Bailey, Jamal Lowe, Michail Antonio and Kemar Roofe.
8:32 PM21 days ago

For a good result

Jamaica arrives after being eliminated in the quarterfinals of the Gold Cup by the United States. After that match, the Caribbean team did not play again until this FIFA date. 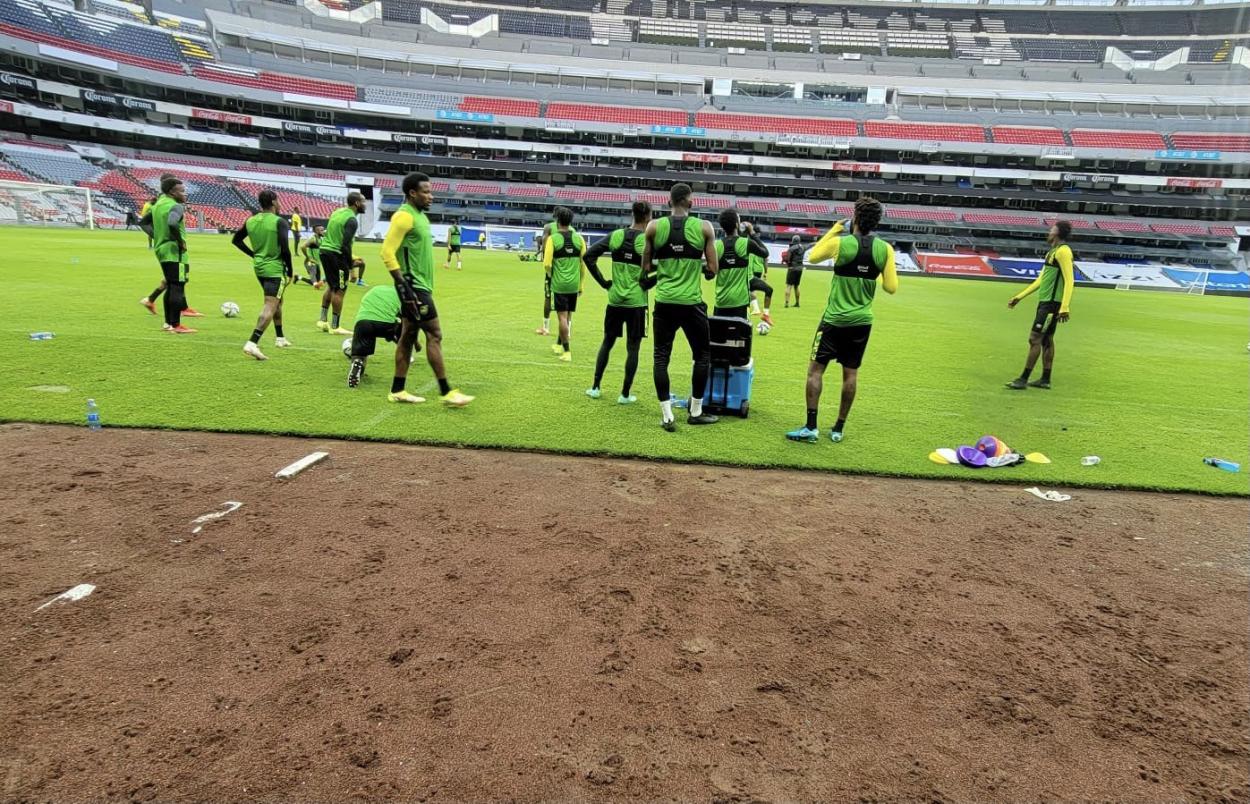 Mexico arrives after losing by the minimum score against the United States in the Gold Cup, a situation that did not leave them at all satisfied. For the start of the Octagonal, they will be looking to win and add points in order to qualify for the 2022 World Cup in Qatar. 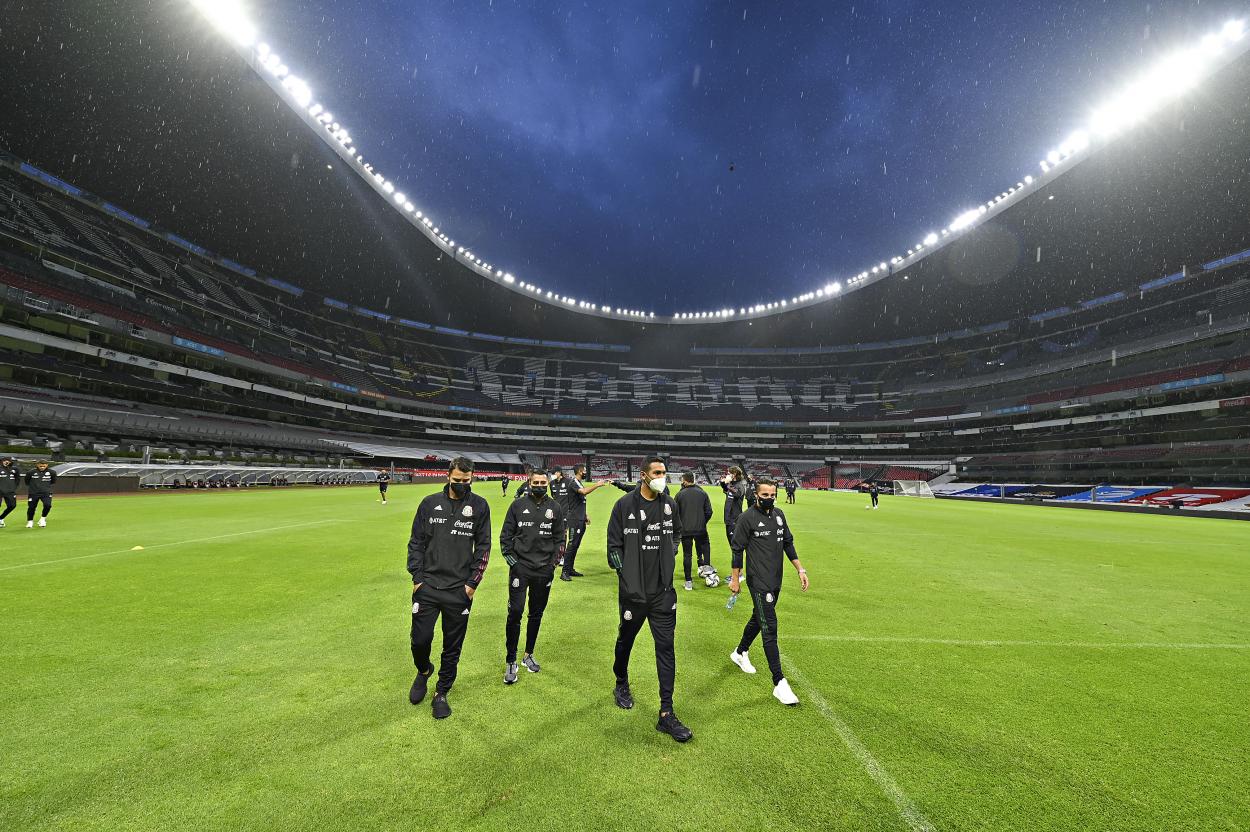 The match will be played at the Azteca Stadium

The Mexico vs Jamaica match will be played at the Azteca Stadium located in Mexico City; with capacity for 87,523 people. 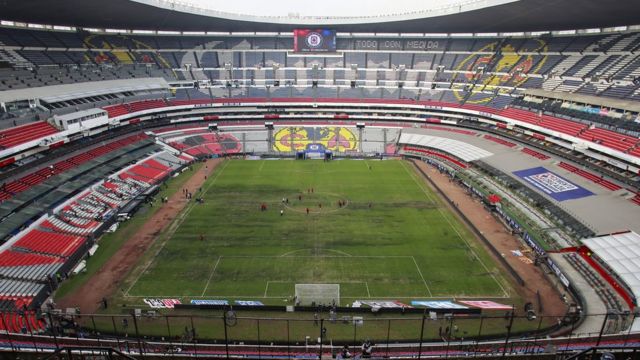