Thank you for following the Costa Rica-Mexico CONCACAF World Cup Qualifying game. See you next time.
9:02 PM23 days ago

Mexico pulled out a narrow win at home to Costa Rica to take the lead in the CONCACAF octagonal finals.
9:00 PM23 days ago

Marín with the cross shot that two players failed to close. Mexico was saved.
8:58 PM23 days ago

Fuller with a shot off the crossbar with five minutes added on.
8:54 PM23 days ago

Change of Costa Rica. Blanco is replaced by Waston.
8:49 PM23 days ago

The game is becoming a bit choppy and lacking in clarity for both teams.
8:46 PM23 days ago

Leal and Ruiz come out

Edson Álvarez knocks down an opponent and is yellow flagged.

Montes knocks down Campbell and is cautioned.
8:36 PM23 days ago

Corona and Funes Mori come out

Guzman takes down Alvarez and is cautioned.
8:30 PM23 days ago

Orbelín enters the area, but does not get his head up and there is a defensive rebound.

Moya is replaced by Marín, Costa Rica makes a substitution.

Guardado did not take advantage of the rebound, although he did get a corner kick.
8:27 PM23 days ago

Service inside the area that Moya fails to finish.
8:24 PM23 days ago

Orbelín with a long cross to the far post that goes wide.
8:22 PM23 days ago

Funes Mori misplaced the pass when he came forward in the two-on-one.
8:20 PM23 days ago

The second half begins between Costa Rica and Mexico.

Campbell enters and Oviedo comes out.

Guzmán's shot from a free kick went wide, although it was offside.
7:53 PM23 days ago

Jesús Gallardo has been cautioned.
7:51 PM23 days ago

Andrés Guardado is fouled on the line of the area and there is a penalty kick.
7:47 PM23 days ago

Matarrita's shot from half distance goes too high.
7:43 PM23 days ago

Alexis Vega is injured and will be substituted.
7:42 PM23 days ago

Francisco Cano has been cautioned.
7:41 PM23 days ago

Dominguez's header goes wide from a set piece cross to the near post.
7:39 PM23 days ago

Jesus Corona was brought down on the left and Ricardo Blanco was cautioned.
7:35 PM23 days ago

A corner kick passed to the far post is blocked by the Costa Rican defense.
7:30 PM23 days ago

The one Funes Mori missed

Funes Mori failed to take advantage of a mistake at the start and Navas saved his goal. Mexico lost it.
7:23 PM23 days ago

Bryan Ruiz's shot from half distance is saved by Ochoa.
7:16 PM23 days ago

Alexis Vega's shot is deflected by the defense and the ball goes over the top.
7:11 PM23 days ago

Rodriguez's shot hits the defense and Mexico is awarded a corner kick.
7:10 PM23 days ago

Gallardo's cross with his head is cut off by the defense.
7:09 PM23 days ago

Matarrita's shot from half distance goes wide of the goal.
7:05 PM23 days ago

The match between Costa Rica and Mexico begins.
6:58 PM23 days ago

At this moment, under FIFA protocol, Costa Rica and Panama take the field.
6:53 PM23 days ago

Panama's victory over Jamaica puts the Canaleros at the top of the group with four points, so Mexico, in order to remain at the top, and Costa Rica, in order to stay there, will have to get all three points this Sunday.
6:50 PM23 days ago

Both Mexico and Costa Rica have just finished their warm-up exercises because in 13 minutes the second game of the octagonal will be kicking off for both countries. 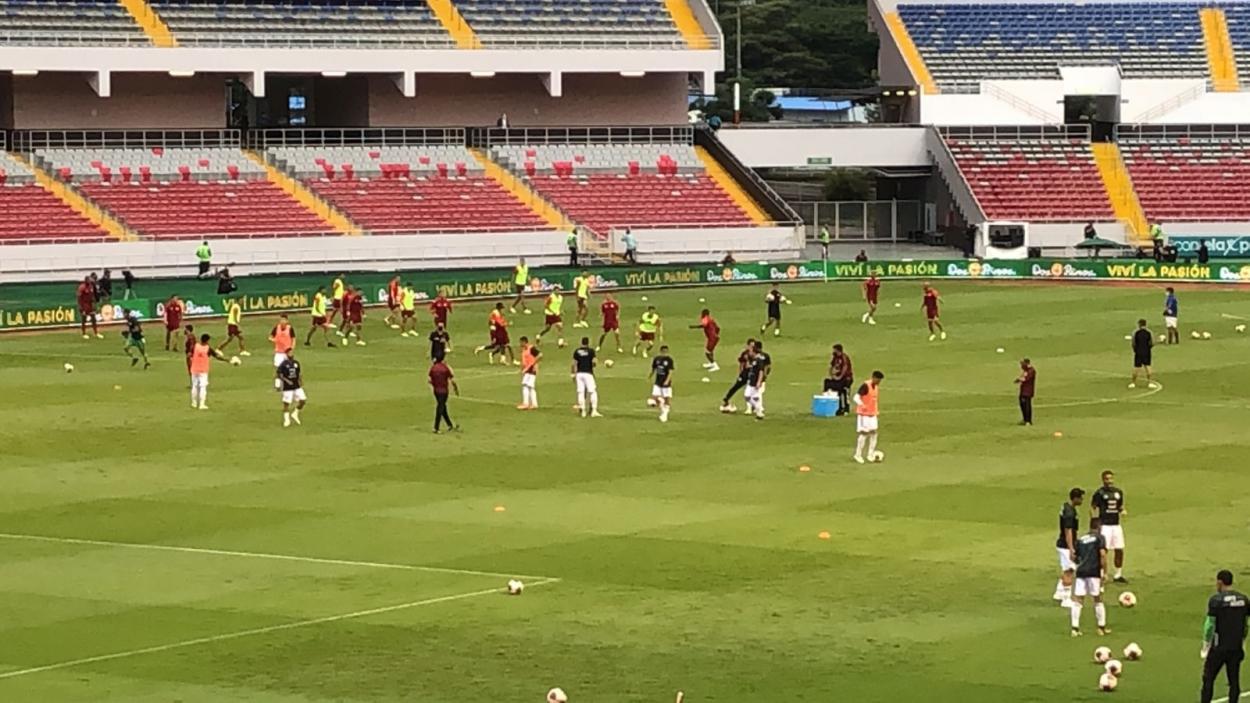 New in the eleven

One of the big news is the reappearance of Andrés Guardado, a player from Spain's Real Betis, as a starter, after missing the Gold Cup due to injury and only playing a few minutes in the match against Jamaica. 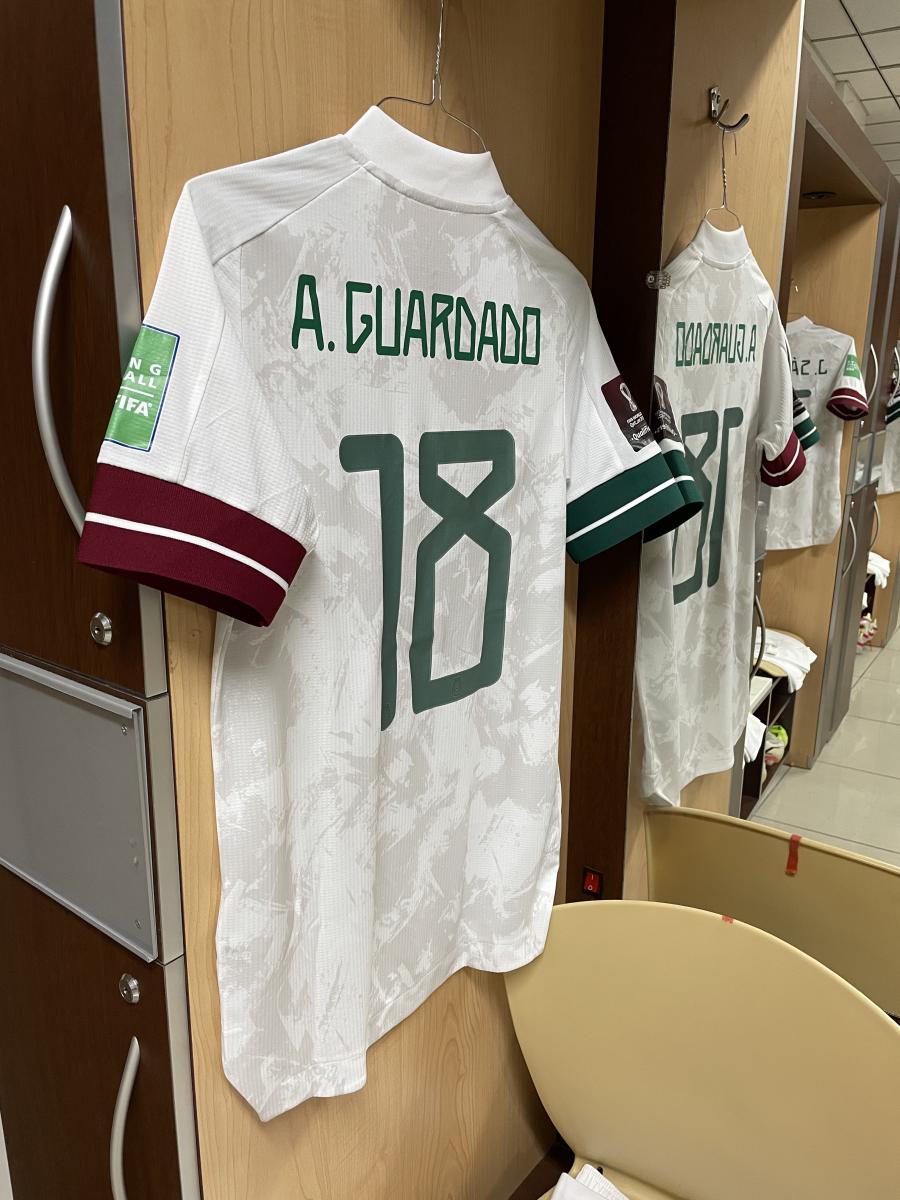 Only 3,000 tickets went on sale, so Mexico will not experience as hostile an environment as in previous visits to Costa Rica's National Stadium.
6:35 PM23 days ago

After a few years and some absences, Keylor Navas will return to play on home soil and hopes to keep a clean sheet to help Costa Rica get its first win of the octogonal after the 0-0 draw against Panama.

There was speculation that one of the modifications could be the substitution of Tigres' Luis Rodríguez for América's Jorge Sánchez, but neither of them will start. 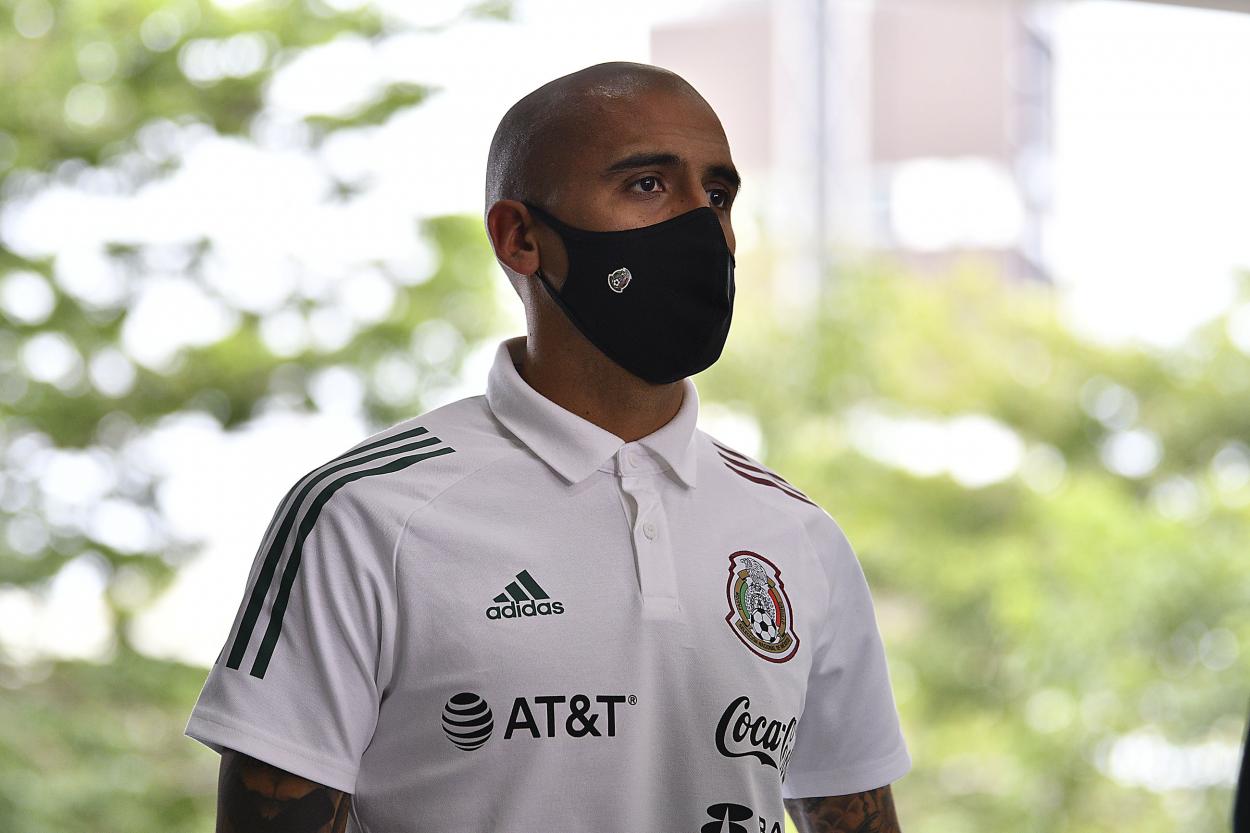 Gerardo Martino's team has made four changes compared to the game against Jamaica, including the return of Julio César "Cata" Domínguez, who will be sharing the central defense alongside César Montes and Néstor Araujo to play, probably, with three central defenders and two wingers.
6:15 PM23 days ago

At the same venue, in Costa Rica's National Stadium, Mexico experienced one of its worst moments when it lost against Costa Rica and was almost eliminated from Brazil 2014. However, thanks to the victory of the United States in Panama, "El Tri" advanced to re-qualification, where it overcame New Zealand to qualify for another World Cup.
6:05 PM23 days ago

One of the biggest problems in recent days is that tickets for the game have been as high as $250, a high figure for many fans who, despite this, have gathered for the clash between Costa Rica and Mexico. 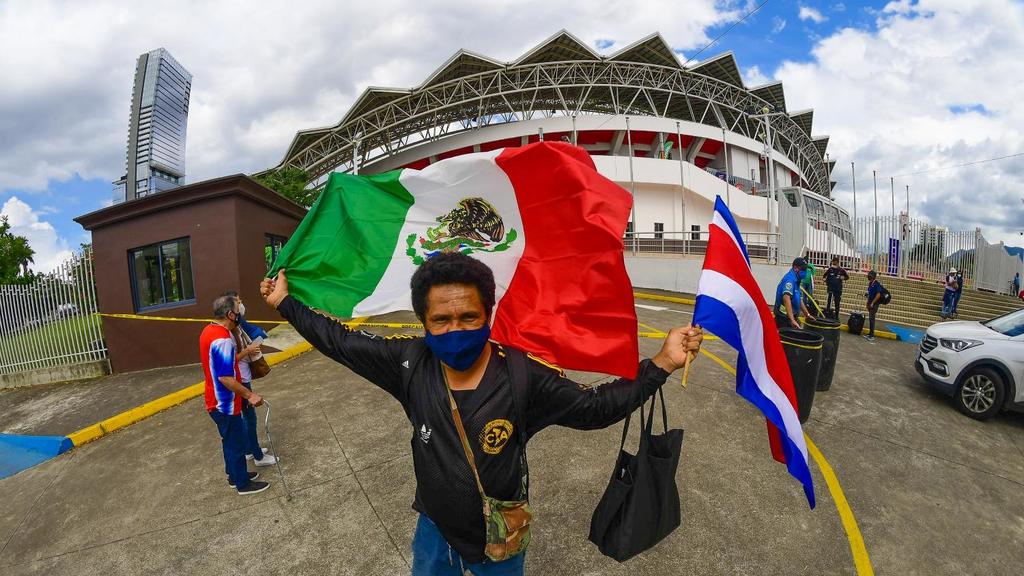 The Mexican team will have some modifications and according to information from TUDN, Uriel Antuna and Jesús Corona will be in the starting lineup for Sunday. We will confirm the official lineup in a few minutes.
5:55 PM23 days ago

Costa Rica and Mexico will play the starring role in this CONCACAF match, where both teams will have changes with respect to their first match. We begin with the coverage.
5:50 PM23 days ago

Do not miss a detail of the match with the live updates and commentaries of VAVEL. Follow along with us all the details, commentaries, analysis and lineups for this Costa Rica vs Mexico match.
5:45 PM23 days ago

What time is Costa Rica vs Mexico match for World Cup Qualifiers?

This is the start time of the game Costa Rica vs Mexico of 5th September in several countries:

Costa Rica has not been able to beat the "Tricolor" in the last five games, with three draws and two defeats, but the most recent clashes have been very close in both official and friendly games.

Alexis Vega is the player of the moment and not only because of the goal against Jamaica, but since the Olympic Games he has had a good level that has helped the "Tricolor" to achieve good results in recent matches when he has been on the field. 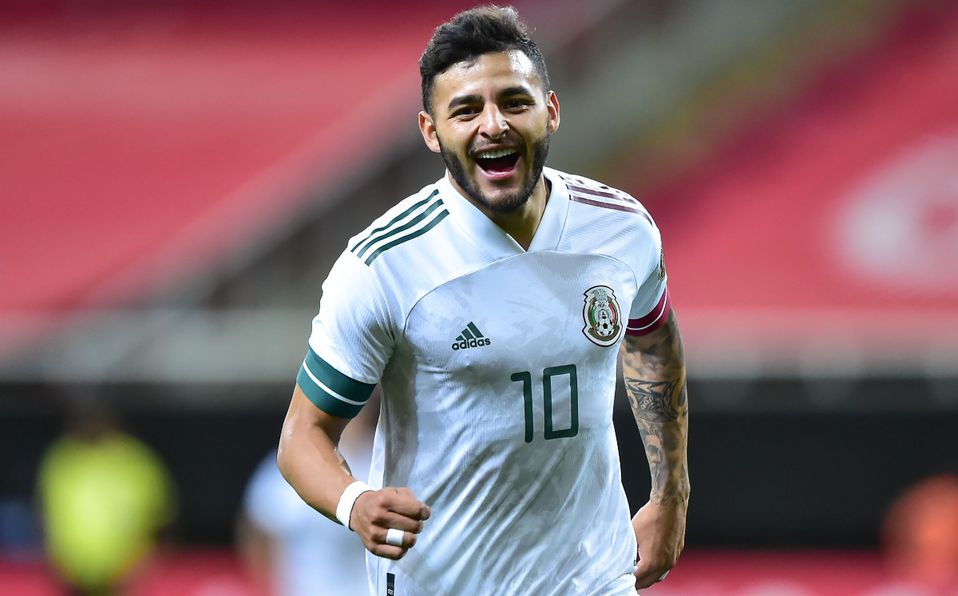 After not being in the Gold Cup, the security under the three goalposts returns to Keylor Navas, who has been a great factor for the last important results that the Costa Rican team has had. 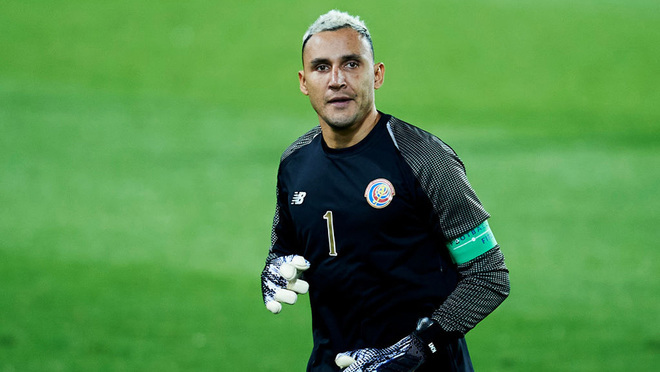 No longer walking in Concacaf

The president of the FMF, Yon de Luisa, agreed with goalkeeper Guillermo Ochoa when he declared that the qualifying rounds have become closed and competitive, so the term "walking to the World Cup" should be forgotten.

"It seems to me that we have seen it for many years and we cannot forget the road to Brazil. The competition has increased everywhere bestially. This level of competition is getting tighter and we see it every two years in the Gold Cup and it will be no different in this octagonal qualifying process for Qatar.

We have to qualify and do well. There is no simple competition, no World Cup qualification process that is simple. We know that there are no easy opponents and there is no easy competition," he stressed.

This Friday, the Mexican Football Federation (FMF) announced that the technical director, Gerardo Martino, had recovered well from the operation for the retinal detachment, however, he will not be able to make the trip to Central America and will miss the games against Costa Rica and Panama, next Wednesday.

"The result of the operation was satisfactory. The operation he underwent was due to a retinal detachment he suffered the previous week.

According to the treating physician, it was important to perform the operation urgently to avoid the risk of losing fine vision, as well as to make a trip, since the pressure of the flight implied the risk of having serious damage or even total loss of vision," the FMF indicated through a press release.

Mexico: to be forceful

One of the issues that the Mexican team has suffered the most in recent games has been the lack of accuracy in front of the opponent's goal, which has caused them to have very tight games, such as last Thursday's 2-1 victory over Jamaica in the last minutes.

It is expected that Jesús Corona, who arrived late to the call-up after defining his future in Europe, will be available for this game, which will continue to be linked to Porto of Portugal.

Costa Rica: to improve its level

Costa Rica is not going through one of its best moments, but they are still looking to make their local condition count in their debut in front of their people in the World Cup qualifiers. In their first match they drew goalless as visitors against Panama, although they were outplayed at some moments of the game.
4:55 PM23 days ago

The Costa Rica vs Mexico match will be played at the National Costa Rica Stadium, in San Jose, Costa Rica. The kick-off is scheduled at 7:00 pm ET.
4:50 PM23 days ago