Our coverage of the match between France and Finland on Matchday 6 of Group D in the European Qualifiers for the 2022 World Cup comes to an end. Thank you for joining us! Stay tuned to VAVEL.com to keep up to date with the world of sport.
4:41 PM20 days ago

Match ends at the Parc Olympique Lyonnais, France wins!  Victory for the world champions over Finland at home to move further away at the top of group D of the qualifiers.
4:39 PM20 days ago

Last moments of the match. France is just handling the ball and when they decide, they get closer to the opponent's area.
4:34 PM20 days ago

Seven more minutes will be played in the match.
4:33 PM20 days ago

Clément Lenglet and Aurélien Tchouaméni come on in place of Presnel Kimpembe, who left injured, and Antoine Griezmann, who is undoubtedly the star of the match.
4:30 PM20 days ago

Pogba's ball behind the Finnish defenders. Benzemá arrived and shot, but goalkeeper Hradecky made a good save.
4:29 PM20 days ago

Last five minutes of the match. France is still looking for the third goal.
4:24 PM20 days ago

Benzema was brought down near the area. A very dangerous foul in favor of the French.
4:17 PM20 days ago

Paulus Arajuuri is cautioned in Finland for a foul on Griezmann.
4:15 PM20 days ago

71' Griezmann had it again!

Pogba's ball to Benzema, who was anticipated by an opponent, but the ball was left for Griezmann, who tried a scissor kick, but failed to hit the target.
4:11 PM20 days ago

Teemu Pukki is cautioned for Finland.
4:05 PM20 days ago

Great play by Benzema, Martial and Griezman with a beautiful triangulation, but in the end, the option of a hat-trick vanished with his shot that went over.
3:58 PM20 days ago

Great play by Benzema leaving two players in the way, he found Léo Dubois, who played with Griezmann and the latter defined very well at the near post in front of Hradecky's exit. 2-0.
3:56 PM20 days ago

Griezmann's cross was turned away by the Finnish defense, the rebound fell to Léo Dubois, who shot but the ball went wide.
3:49 PM20 days ago

The match restarts and the last 45 minutes of the game are underway.
3:33 PM20 days ago

The first half of the match ends. France partially wins 1-0 over Finland with a goal by Antoine Griezmann. Didier Deschamps' team is leading more than ever, for the time being.
3:31 PM20 days ago

One more minute will be played in the first half.
3:27 PM20 days ago

France circulates the ball and tries to reach the Finnish area frequently. Didier Deschamps' team is not suffering at the moment.
3:17 PM20 days ago

France continues to insist on their opponents' territory. They are looking for everything they can and are pinning their opponents back in their own area.
3:12 PM20 days ago

Martial's pass to Benzema, who played first-time and found Griezmann, who finished with a three-finger cross with his left foot. 1-0.
3:09 PM21 days ago

Benzema made a one-two with Griezmann, shot the ball back and the Finnish goalkeeper got his hands to send it for a corner kick.
3:06 PM21 days ago

Schüller's cross from the right saw Vaisanën arrive to head in, but awkwardly.
3:03 PM21 days ago

The rhythm of the game has calmed down for now. Finland is trying to keep the French away from their ground.
2:58 PM21 days ago

7' France tries to impose its game

The French team is looking to tilt the game in its favor and begins to insist in the opponent's half.
2:51 PM21 days ago

Rasmus Schüller was cautioned in Finland for cutting off a promising French breakthrough when Dubois came out with space on the right.
2:49 PM21 days ago

A long throw-in from the right flank, the ball was combed into the box and Dubois sent it for a corner kick.
2:47 PM21 days ago

The match between France and Finland gets underway at the Parc Olympique Lyonnais.
2:46 PM21 days ago

Teams to the field

The players of France and Finland take the field.
2:40 PM21 days ago 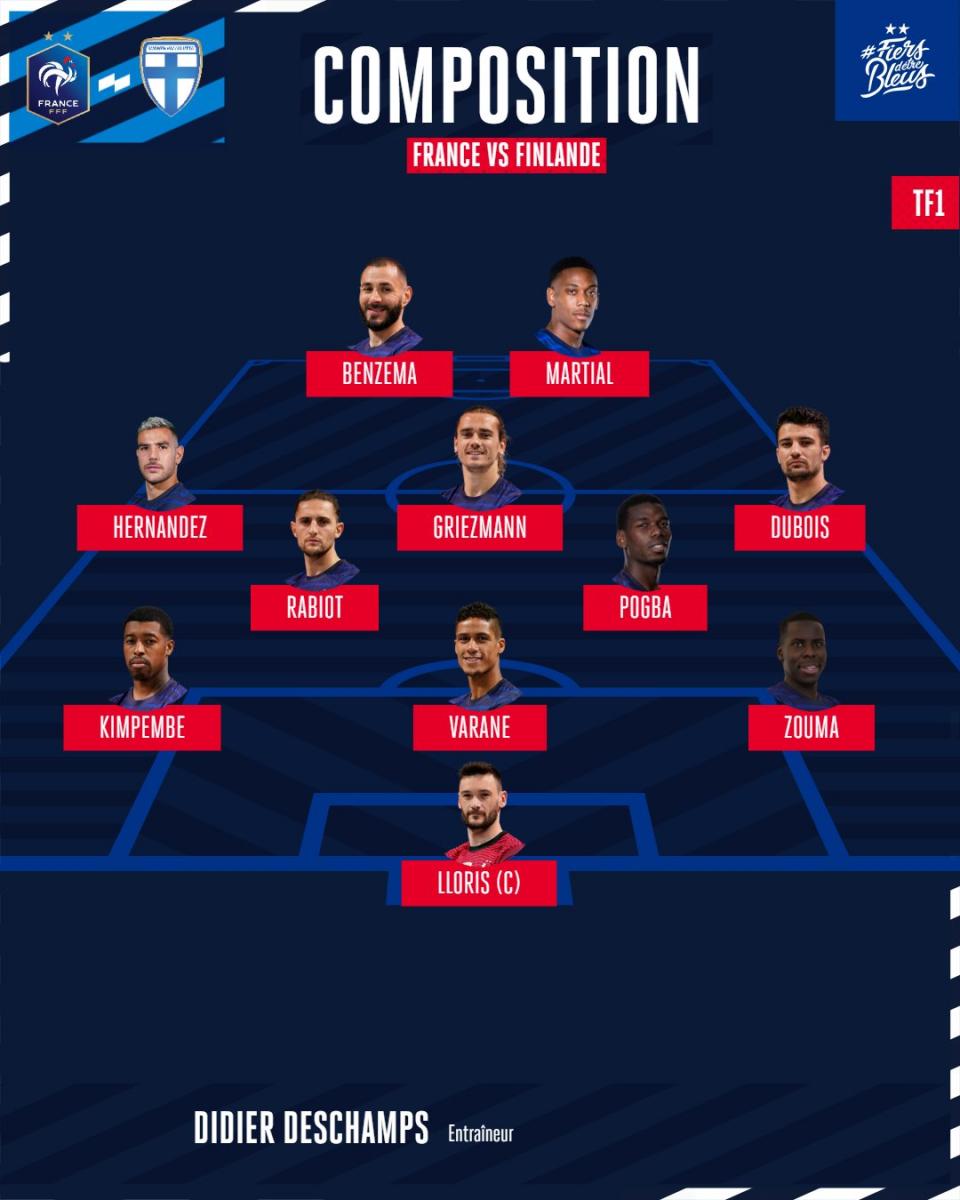 The two teams are already at the Parc Olympique Lyonnais and in less than one hour the match between France vs Finland will start on matchday 6 of group D of the European Qualifiers for Qatar 2022.
11:58 AM21 days ago

In a few moments we will share with you the starting lineups for France vs Finland live, as well as the latest information from the Parc Olympic Lyonnais. Follow the action with VAVEL's live online minute-by-minute coverage.
11:53 AM21 days ago

How to watch France vs Finland live on TV and online?

If you want to watch France vs Finland live on TV, your option is ESPN 2.

If you want to watch it on streaming, your option is TUDN App.

If you want to watch it online, VAVEL USA is your best option

What time is the France vs Finland match?

This is the start time of the game France vs Finland of September 7, 2021 in several countries:

In the Finnish team, the presence of Teemu Pukki stands out, a recursive striker to move in the area. He is someone who already has a lot of experience with his national team, in which he has accumulated 33 goals in 104 games (counting the U21 category).
11:38 AM21 days ago

In the French team, it is remarkable the presence of Karim Benzema, a striker with great conditions, very talented and who is going through a great moment being forceful when it comes to define. With the national team, he has a total of 31 goals in 89 games.
11:33 AM21 days ago

In total, these two teams have met nine times. The numbers largely favor the French, who emerged victorious on eight occasions, while the Finns in the remaining game.

Talking only about the World Cup Qualifiers, they have met six times, all of them being victories for France.

Finland and an unbeatable opportunity

The Finnish team comes into this match with the motivation of having defeated Kazakhstan, a victory that brought them closer to the French, but which they need to revalidate in order to have a great chance of winning the group when they have to catch up with the schedule.
11:23 AM21 days ago

France and the need to win

The French team, coming from two draws against Bosnia and Herzegovina and Ukraine respectively, comes to this match with the obligation to get a win that will allow them to keep calm in group D of the qualifying round. They currently lead the group with nine points, ahead of the Finns (who have two games in hand) by four points.

The match will be played at Parc Olympique Lyonnais

The France vs. Finland match will be played at the Parc Olympique Lyonnais, located in Décines-Charpieu, near the city of Lyon, France. This venue has a capacity of approximately 59,200 spectators.