I would like to thank you here for your audience in another World Cup Qualifying match. Have a good afternoon and see you next time!
4:40 PM10 days ago

In the 7th Qualifying Round, Lithuania faces Bulgaria on October 9 at 10am. Meanwhile, Italy faces Spain on October 6th at 3:45 pm in the Nations League semifinal.
Standings provided by SofaScore LiveScore
4:36 PM10 days ago

With goals from Raspadori, Kean and Di Lorenzo, Italy thrash Lithuania and take all three points home!
4:32 PM10 days ago

Berardi hit a strong free-kick on the edge of the box and sent it to the left side of the goal, but out!
4:28 PM10 days ago

Castrovilli had the ball on the edge of the box and shot hard, hitting the post!
4:27 PM10 days ago

Substitution in Lithuania: Klimavicius is out for Tutyskinas.
4:24 PM10 days ago

Italy takes their foot off the gas a bit and keeps possession, but without conceding or counter-attacks, just playing the ball and making Lithuania run.
4:17 PM10 days ago

Substitution in Lithuania: Out went Dubickas and in came Uzela. And in Italy left Kean for Berardi.
4:04 PM10 days ago

Substitution in Italy: Jorginho and Bernardeschi left for Castrovilli and Scamacca.
3:58 PM10 days ago

Di Lorenzo received on the right after a pass from Bernardeschi and crossed, but the ball went into the back of the net, with a cover!
3:56 PM10 days ago

Calabria's shot from outside the area, Raspadori shot hard, high above the goalkeeper and sent it into the back of the net, but it was already marked offside.
3:53 PM10 days ago

On the right, Bernardeschi received and shot into the net from the outside.
3:49 PM10 days ago

Raspadori gives the first touch on the ball and it rolls into the second half!
3:49 PM10 days ago

The teams are already on the field for the ball to roll once again. In Italy Biraghi and Donnarumma are out, and Calabria and Sirigu are in. In Lithuania Utkus, Slavickas, and Dapkus are out, and Satkus, Narauskas, and Megelaitis are in.
3:33 PM10 days ago

With two from Kean and two from Raspadori, Italy goes on to defeat Lithuania in this first half!
3:28 PM10 days ago

Bernardeschi received on the right, charged and hit hard, but out.
3:15 PM10 days ago

Moise Kean was launched on a beautiful cover pass over the Bernardeschi defense, and hit it hard, sending it into the back of the net without dropping it!
3:10 PM10 days ago

On the right Bernardeschi found Di Lorenzo, who crossed in the middle and the defense took it away, but he took it inside the area and Raspadori took the rebound almost in the small area and sent it to the bottom of the goal!
3:06 PM10 days ago

Bernardeschi received, carried and hit hard from outside the area, but sent it far from the goal.
3:00 PM10 days ago

Raspadori received on the edge of the box, carried the ball to the middle and hit it hard, with Utkus' deflection, to send it into the back of the goal!
2:56 PM10 days ago

Moise Kean, on the wrong side of the ball, invaded the area on the left and, face to face with Setkus, hit hard between the goalkeeper and the post to open the score!
2:55 PM10 days ago

Verbickas took a chance from the edge of the box and sent Donnarumma's hand into his own.
2:47 PM10 days ago

Verbickas already has the first shot of the match, winning a corner kick, which was taken narrowly over the goal line.
2:45 PM10 days ago

Dubickas makes the first touch on the ball and it rolls into the first half of the match!
2:41 PM10 days ago

Now the national anthems of Lithuania and Italy are played.
2:41 PM10 days ago

The teams are already on the field to start the match!
2:27 PM10 days ago

Earlier today Armenia drew 1-1 with Liechtenstein. And at the same time we have: Iceland - Germany, Belarus - Belgium, Hungary - Andorra and Macedonia - Romania.
2:22 PM10 days ago

The players take to the Mapei Stadium pitch to start their warm-up work.

Lithuania comes with new additions. In defense Lasickas, Klimavicius and Slavickas come in. In the middle there are Dapkus and Slivka. And in the attack comes Kazliauskas.
2:00 PM10 days ago

The Italian National Team comes with some new additions and an alternative team for the field. Starting with the defense, where Di Lorenzo, Bastoni, and Biraghi come in. In the middle we have Pessina, Jorginho and Cristante. And in the attack, the doubt has become a double certainty: Raspadori and Kean play alongside Bernardeschi.
1:52 PM10 days ago

Italy has been selected for the match and will field the following starting 11: 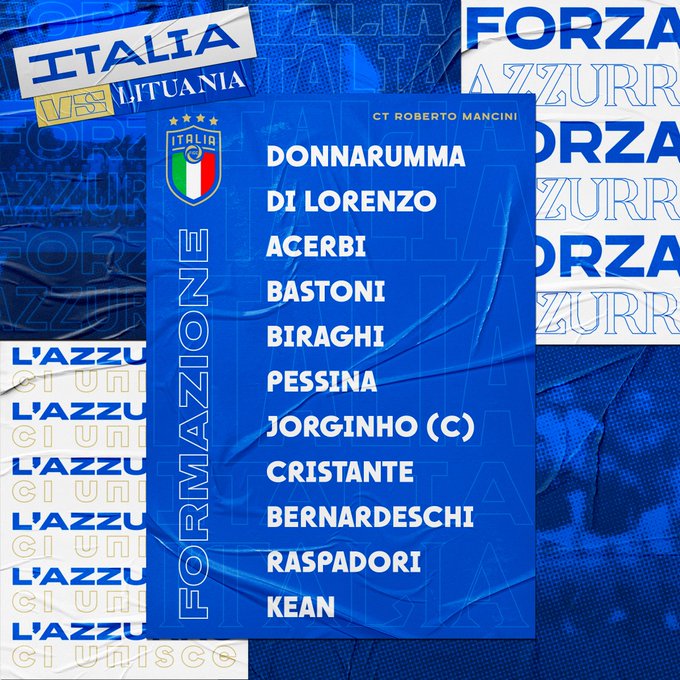 Now the broadcast of the World Cup Qualifier between Italy and Lithuania begins!
12:36 AM10 days ago

Do not miss a detail of the match with the live updates and commentaries of VAVEL. Follow along with us all the details, commentaries, analysis and lineups for this Italy vs Lithuania match.
12:31 AM10 days ago

How to watch Italy vs Lithuania Live in TV and Stream

If you want to watch the game Italy vs Lithuania live on TV, your options is: CBS.

If you want to directly stream it: Streaming services and CBS Sports app.

Craig Pawson will referee the match, with assistants Lee Betts and Ian Hussin, with the whole trio coming from England.
12:21 AM10 days ago

The probable lineup for the match is Italy: Donnarumma, Calabria, Bastoni, Bonucci and Emerson; Locatelli, Verratti and Zaniolo; Chiesa, Raspadori and Insigne. 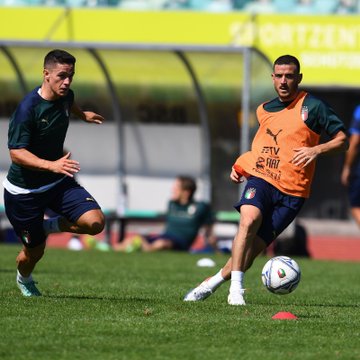 Italy will not be able to use Belotti in the attack, the only new absentee, with Kean and Raspadori fighting for the spot. Lithuania, on the other hand, will be at full strength for the match.
12:06 AM10 days ago

Italy leads group C with 11 points from five games played. Switzerland has seven from three games, and is in second place. Bulgaria comes with five in five games, Northern Ireland has four in three games, and in four games Lithuania has no points earned.
12:01 AM10 days ago

Lithuania, on the other hand, comes from two defeats in the last two qualifying matches. Against Bulgaria, last Sunday (5), the less painful defeat, by 1-0, with goals from Chochev near the end of the second half. And against Northern Ireland, on Thursday, a painful defeat, 4-1. Ballard opened the scoring, Washington, from the penalty spot, added to his tally. Baravykas even pulled one back, but Lavery added to his tally and McNair, from the penalty spot, turned victory into a rout.
11:56 PM10 days ago

Italy comes to the match of two draws already in the Qualifiers. Last Sunday (5), against Switzerland, in a game that was evenly contested, Italy left the field with a 0-0. And against Bulgaria, last Thursday (2), another draw, but this time 1-1. Chiesa opened the scoring early in the first half, but Iliev equalized near the end of the first half.
11:51 PM10 days ago