I would like to thank you here for your audience in another Qualifying match. Stay tuned here for the repercussions of this match. Have a good night, and see you next time!
10:29 PM18 days ago

Brazil returns to the field on October 7th, when it visits Venezuela. Peru, on the other hand, receives Chile, on the same day. Both games still have no set schedule.
Standings provided by SofaScore LiveScore
10:25 PM18 days ago

With goals from Everton Ribeiro and Neymar, Brazil wins against Peru and takes the three points home!
10:24 PM18 days ago

Neymar hit the free-kick into the hands of Gallese.
10:24 PM18 days ago

On the left Neymar received and was brought down. A dangerous foul for Brazil.
10:20 PM18 days ago

Yellow for Neymar, for leaving his arm on Callens while playing for the ball in the attack field.
10:16 PM18 days ago

Hulk received in the penalty area, dominated with the chest already taking the goalkeeper and hit hard, but over the goal, already without angle!
10:13 PM18 days ago

Double substitution in Brazil: Gabigol and Gerson are out, replaced by Hulk and Edenílson.
10:07 PM18 days ago

Substitution in Brazil: out Casemiro and in Bruno Guimarães.
10:03 PM18 days ago

A corner was taken and the defense took it to the side. Peruvian possession.
10:03 PM18 days ago

López took a long shot that Weverton put over the goal. And substitution in Peru: Lapadula left and Ruidiaz entered.
9:56 PM18 days ago

Double substitution in Brazil: out Danilo and Everton Ribeiro for the entry of Daniel Alves and Matheus Cunha. And at the exit of the game Costa received a yellow for lifting Gerson.
9:51 PM18 days ago

On the cross there was a header, which went into the hands of Weverton, but the striker was offside.
9:51 PM18 days ago

From the left Peru received a foul to be lifted in the area.
9:49 PM18 days ago

Double substitution in Peru: Yotun and Tapia left for Cartagena and Costa.
9:46 PM18 days ago

Yellow card to Lucas Paquetá, for a high foot on Tapia in the field of attack.
9:38 PM18 days ago

Flores took a chance from outside the area and sent it through Weverton's right side, but without danger.
9:37 PM18 days ago

Gabigol received the ball in the middle of the field and shot dangerously!
9:37 PM18 days ago

Lapadula makes the first touch on the ball and it rolls into the second half of the match!
9:37 PM18 days ago

The players return to the field to start the second half. And we have two substitutions for Peru: Santamaria and Cueva are out for Ramos and Flores.
9:18 PM18 days ago

With goals from Everton Ribeiro and Neymar, Brazil comfortably wins 2-0 against Peru!
9:14 PM18 days ago

Casemiro is yellow carded for getting loose with Yotun, making the foul in midfield.
9:11 PM18 days ago

Everton Ribeiro puts Danilo on the right, who brings Gabigol into the area. He crossed and the defense took it away, but it was left for Everton Ribeiro to hit, deflected, leaving Neymar in the small area without a goalkeeper to make the second!
9:08 PM18 days ago

Yotun hit Neymar near midfield and was yellow-carded for the foul.
9:06 PM18 days ago

Everton Ribeiro took the corner and the defense took it in the small area.
9:05 PM18 days ago

Gabigol received in the middle, played to Paquetá, who advanced and crossed winning a corner. And we have yellow for Tapia.

Santamaria was dribbled by Neymar and made an NFL-style tackle on him, receiving a yellow card for the foul!
8:57 PM18 days ago

Cueva took the corner and the defense took it away. Peruvian possession.
8:56 PM18 days ago

Yotun took the free-kick and sent it into the box, with the defense putting it out for a corner.
8:56 PM18 days ago

Cueva received in the midfield and was brought down, earning a free-kick with a chance to lift him into the box.

Neymar took the corner and the ball went into the hands of Gallese.
8:50 PM18 days ago

Gabigol was released in the area and tried a cross. The ball deflected into the corner.
8:45 PM18 days ago

Neymar disputed the ball with Santamaria, kept it and crossed to the middle, where Everton Ribeiro put it into the net!
8:42 PM18 days ago

Tapia took a chance from outside the area and sent it weakly to the right side of Weverton.
8:40 PM18 days ago

Gerson was launched in the middle, took off and came out in the face of Gallese, hitting hard, but the goalkeeper deflected away!
8:36 PM18 days ago

Lapadula received inside the penalty area and hit hard, but sent it into the stands, missing the chance to open the score!
8:32 PM18 days ago

Cueva took a corner kick at the first post and the defense took it out of the area. Peruvian possession.
8:32 PM18 days ago

Advíncula received on the right and crossed, earning a corner.
8:30 PM18 days ago

Gabigol gives the first touch on the ball and it rolls into the first half of the match!
8:30 PM18 days ago

A minute of silence is now observed in honor of the Covid-19 victims.
8:27 PM18 days ago

Now the national anthems are played at the Arena Pernambuco.
8:27 PM18 days ago

The players appear on the field to start the match!

The players leave the pitch of the Arena Pernambuco to continue their preparation for the match and soon return to the field for the ball to roll!
8:13 PM18 days ago

Colombia receives Chile in the Metropolitan and is also winning 2-0, with two goals from Borja, one of them being a penalty kick.
8:07 PM18 days ago

Paraguay beat Venezuela 2-0 at the Defensores del Chaco. Hector Martinez opened the scoring early on and Romero extended the lead early in the second half.
8:07 PM18 days ago

The round so far has a few games in hand. Uruguay are held to a goalless draw by Ecuador.
8:04 PM18 days ago

The players go up to the pitch of the Arena Pernambuco to start the warm-up work.
7:57 PM18 days ago

At home, the Brazilian National Team received the Peruvian National Team 15 times, with 11 wins, two draws and two losses. In the Qualifiers there are five games, with four wins and one draw.
7:52 PM18 days ago

Peru comes to the match with a new addition, besides Advíncula at the back, which was a doubt: Gonzales in midfield, in place of Flores.
7:41 PM18 days ago

Peru is already scheduled for the match and will field the following starting 11: 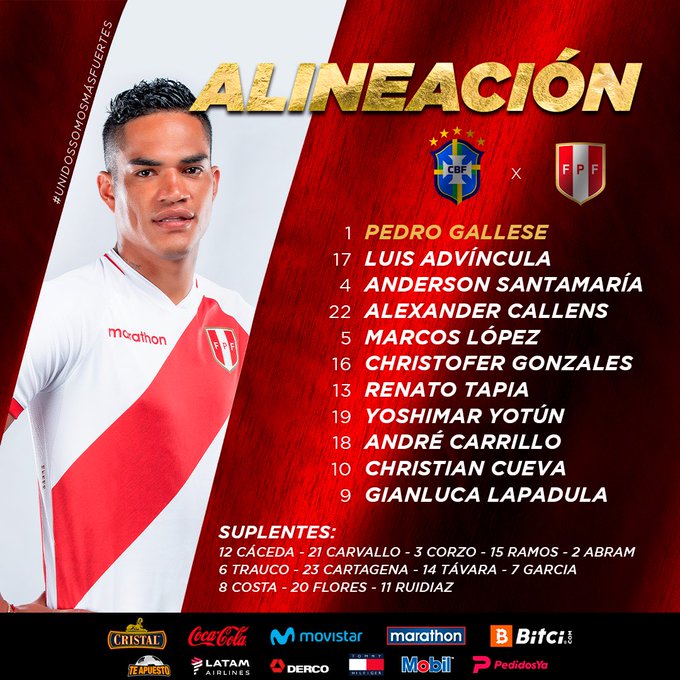 Brazil was already scheduled in advance and comes as expected, with no changes!
7:35 PM18 days ago

Brazil has been selected for the match and will field the following starting 11: 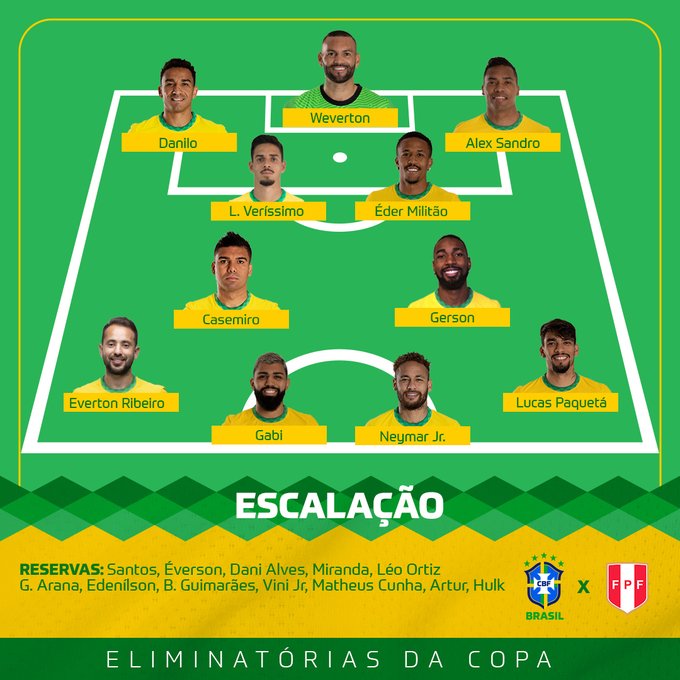 Now begins the broadcast of the World Cup Qualifying match between Brazil and Peru!
7:01 PM18 days ago

Do not miss a detail of the match with the live updates and commentaries of VAVEL. Follow along with us all the details, commentaries, analysis and lineups for this Brazil vs Peru match.
6:56 PM18 days ago

How to watch Brazil vs Peru Live in TV and Stream

If you want to watch the game Brazil vs Peru live on TV, your options is: Sky.

If you want to directly stream it: Streaming services and Blue to go app.

In the last time

The last time the two teams met was in the semifinal of this year's Copa America, which took place on July 5, at Nilton Santos Stadium. On that occasion Brazil won 1-0 with a goal by Lucas Paquetá in the first half and qualified for the final, where they were defeated 1-0 by Argentina.
6:46 PM18 days ago

Wilmar Roldan will referee the match, with assistants Alxander Guzman and Wilmar Navarro, with the entire trio coming from Colombia. Coming from Uruguay, Esteban Ostojich will be in charge of VAR.
6:41 PM18 days ago

Meanwhile Peru should go with Lapadula in place of Guerrero. In defense there is doubt between Advíncula and Corzo, but the team should be: Gallese, Advíncula (Corzo), Santamaría, Callens and Marcos López; Tapia, Yotún, Carrillo, Cueva and Edison Flores; Lapadula. 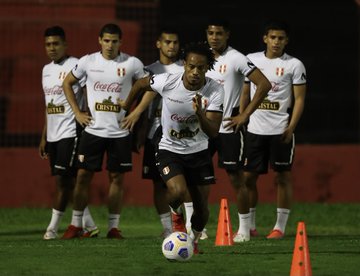 With this Brazil will repeat the team that "took the field" against Argentina and is confirmed with: Weverton, Danilo, Lucas Veríssimo, Éder Militão and Alex Sandro; Casemiro, Gerson, Lucas Paquetá and Everton Ribeiro; Neymar and Gabigol.
6:31 PM18 days ago

In a press conference held before the match, Tite commented on the whole situation of the meeting with Argentina: "The fair decision is to respect laws, the fair decision is before people's health. The fair decision is that sport is important, but it has a scale of importance in which health is above, laws are above. I would like the game to be, yes. Before that, all the manifestations of Anvisa, of the Ministry of Health, are absolutely correct, it is about laws, about respecting laws, soccer is not above that, it has to be respected, we are dealing with lives. "Ah, but he opened another one. I don't care. I have criteria that are above this: it is health, yes, that there is an audience, that we work. Associated to this, when you have health and vaccines, you will have jobs and work, associated to this you will have dignity. But to come and bypass laws, to circumvent situations, this does not exist. I do want the game to happen. Maybe the execution time... I can't judge that. I don't have enough knowledge to know what was done and how long it was done. I cannot judge and should not judge. But of passing over laws... Ah, no. A little respect to an entity, a country, a people, a club, a team. Calm down! Respect, yes".
6:26 PM18 days ago

Tite and Ricardo Gareca will not have only one player each. Both suspended, Marquinhos and Guerrero are out of the match and will be missing.
6:21 PM18 days ago

Despite playing a game less, Brazil leads the World Cup Qualifiers here in South America with 21 points from seven matches, with an incredible seven wins. Argentina is right behind with 15 points from seven matches. In third place are Ecuador with 13 points, followed closely by Uruguay with 12. In fifth place are Colombia with 10 points, and just below are Paraguay and Peru with eight points each. In eighth place is Chile, with seven points. In ninth is Bolivia, with six and in tenth is Venezuela, with four points.
6:16 PM18 days ago

Peru, on the other hand, played its two games on this FIFA date, as expected. Last Sunday (5) the Peruvian team received Venezuela and won by 1-0, with a goal by Cueva. Before that Peru played the same Thursday as Brazil, again at home, when they received Uruguay and drew 1-1. Tapia opened the scoring for Peru, but Arrascaeta, five minutes later, equalized for Uruguay.
6:11 PM18 days ago

Brazil played only one game on this FIFA Qualifying date. Against Chile, last Thursday (2), the Seleção visited Chile and left the field victorious, with a solitary goal by Everton Ribeiro. After that Brazil should have received Argentina, but due to the situation of the Argentine players coming from England, the match was suspended. It even started, but the agents of Anvisa came in to prevent it from continuing, and so here we are, with no prediction of a resolution to this situation.
6:06 PM18 days ago

Chicago Fire 0-0 Nashville SC: Honors even at Soldier Field a day ago
//