WAS0
END18 hours ago

Thanks for following this match on VAVEL USA! Until the next time.
12:22 AMa month ago

The referee signals a penalty kick in favor of Xolos!
12:03 AMa month ago

Jordi Cortizo's shot goes over the goal.
12:01 AMa month ago

This was Santos' goal

The referee adds five more minutes to the match.
12:00 AMa month ago

AGAIN XOLOS! Lajud comes out, and Angulo, seeing him in front, shoots at goal, but the visiting defense clears the ball off the line.
11:53 PMa month ago

Xolos: Mauro Manotas is out and Marcel Ruiz is in.
11:52 PMa month ago

Santos: Ignacio Jeraldino and Jesús Isijara are in; Emilio Orrantia and Brian Lozano are out.
11:47 PMa month ago

THEY MISS THE SECOND GOAL! Angulo's low cross into the six-yard box, but no one is able to close the gap and Xolos miss out on the second goal.
11:43 PMa month ago

Xolos: Misael Domínguez and Fidel Martínez are out; Jordi Cortizo and Jonatan Ortiz are in.
11:38 PMa month ago

MANOTAS! Mauro's powerful shot is blocked by Gibran Lajud, but no one can reach the rebound.
11:37 PMa month ago

LAJUD! Free kick taken by Xolos and deflected for a corner kick by the Santos goalkeeper.
11:19 PMa month ago

The referee adds three more minutes to the first half.
10:53 PMa month ago

Manotas' half-turn in the area sends a shot over the crossbar.
10:49 PMa month ago

Once again Orozco! Brian Lozano's shot inside the area is deflected by the goalkeeper.
10:39 PMa month ago

Orozco makes a save! Dória's shot from outside the area is blocked by the Xolos goalkeeper.
10:35 PMa month ago

ORRANTIA IS CLOSER! A shot from the corner of the box goes just over Orozco's crossbar.
10:31 PMa month ago

Omar Campos' shot from outside the area passes very close to the goal.
10:24 PMa month ago

In the first quarter of the match, Santos had more of a foothold in the opponent's area.
10:24 PMa month ago

Nearly Olympic goal! After a corner kick by Brian Lozano.
10:22 PMa month ago

Fidel! Fidel Martinez, in the area, hits a first-time shot, but his shot goes over the top of the goal.
10:18 PMa month ago

Alessio was shooting against the goal and the ball was punched out! Santos more dangerous at the start.
10:08 PMa month ago

The match has started!
9:48 PMa month ago 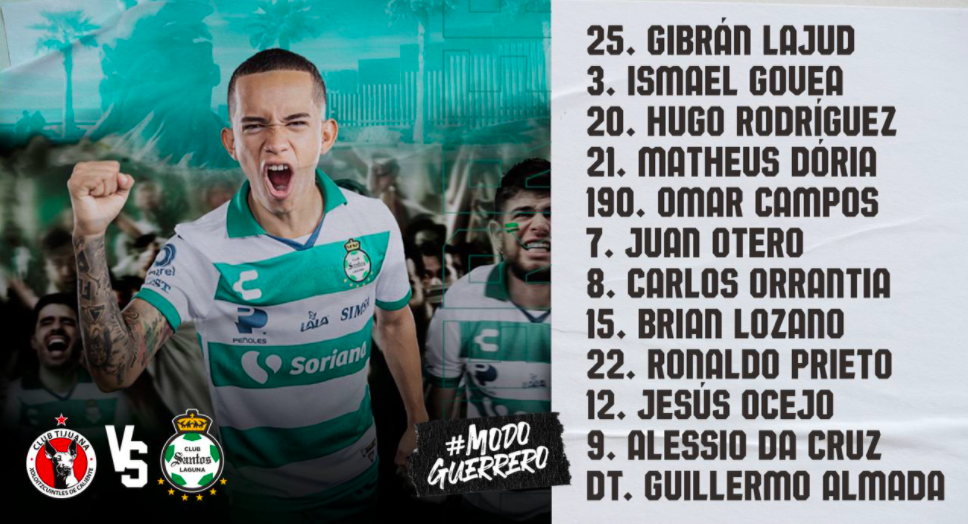 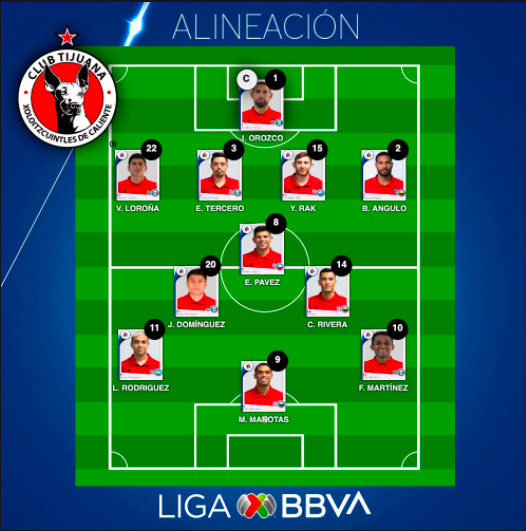 Both teams are already on the field at Estadio Caliente doing warm-up exercises. 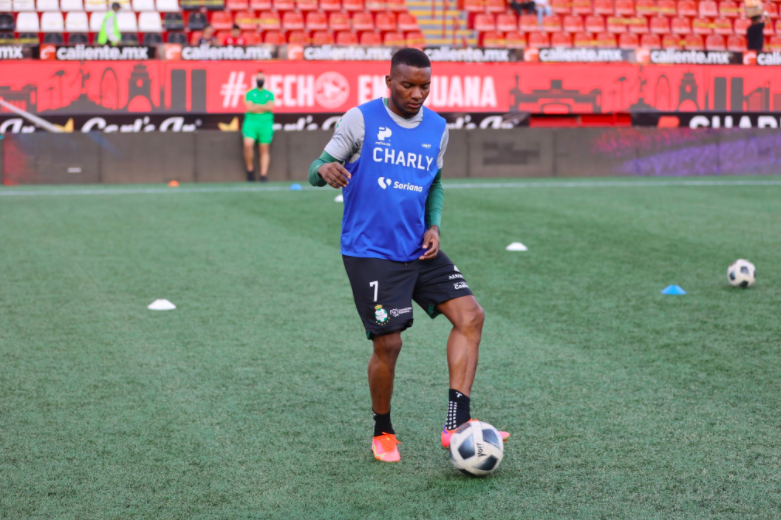 La Jauria fans are also at the Estadio Caliente to support their team, which is desperate for a victory, as they have yet to win in the current tournament. 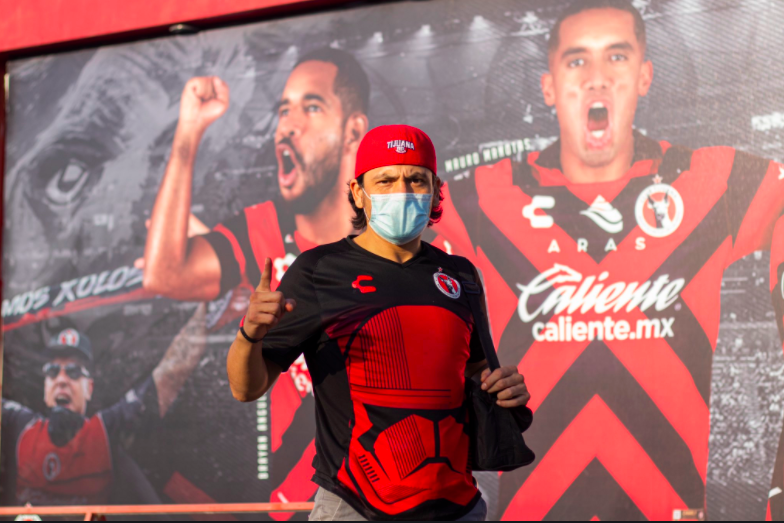 Some Santos fans gathered at Estadio Caliente early. Brian Lozano went up to the stands to take some pictures with the green and white fans. 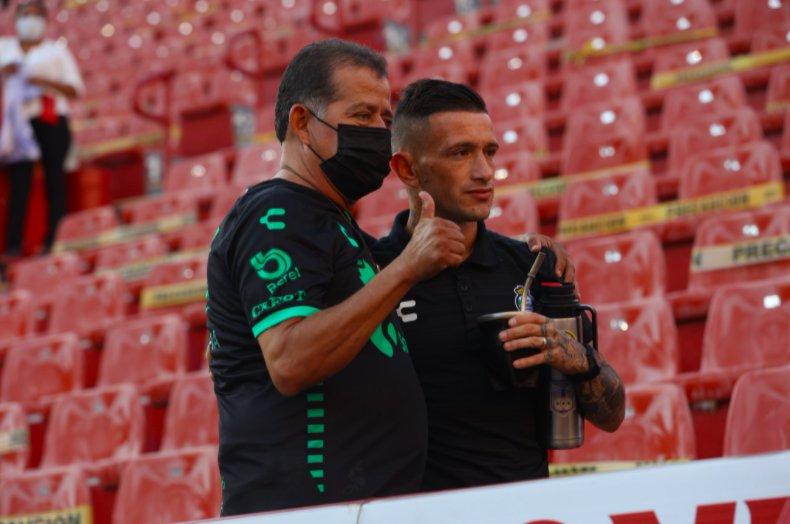 Santos will be without Diego Valdés, Félix Torres and Fernando Gorriarán for tonight's match due to the fact that they played international matches last Thursday and will report to their club in Seattle for the Leagues Cup in the middle of the week. In addition to these absences, Carlos Acevedo is out due to injury.
9:19 PMa month ago

With the respective health protocols in place, both teams are already at the Caliente Stadium for tonight's match. 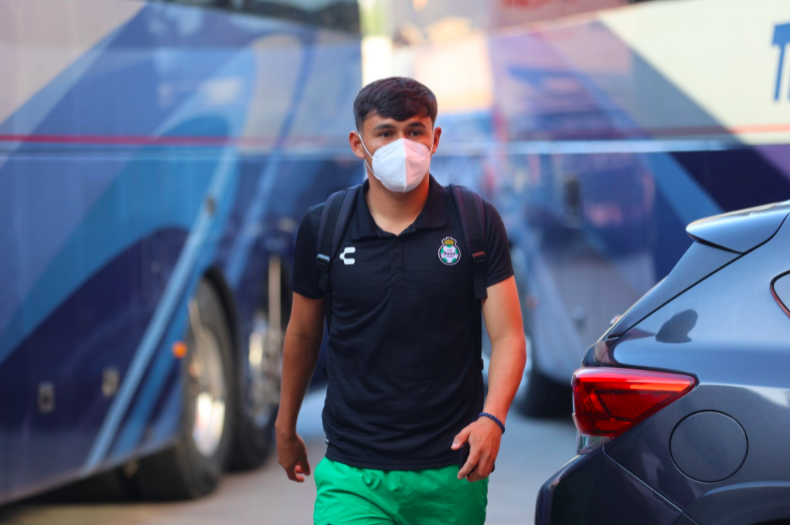 In the last five matches between these two teams, the balance is in favor of the green-and-white team with three wins, one draw and one win for Tijuana. In their most recent meeting in March of this year, Santos won at the Estadio Caliente 1-0.
9:06 PMa month ago

Caliente Stadium is a multi-purpose stadium that is home to the Xolos de Tijuana. It has a capacity of 27,333 spectators and due to the sanitary measures imposed by the Government of the State of Baja California, today it can hold 30% of its capacity. 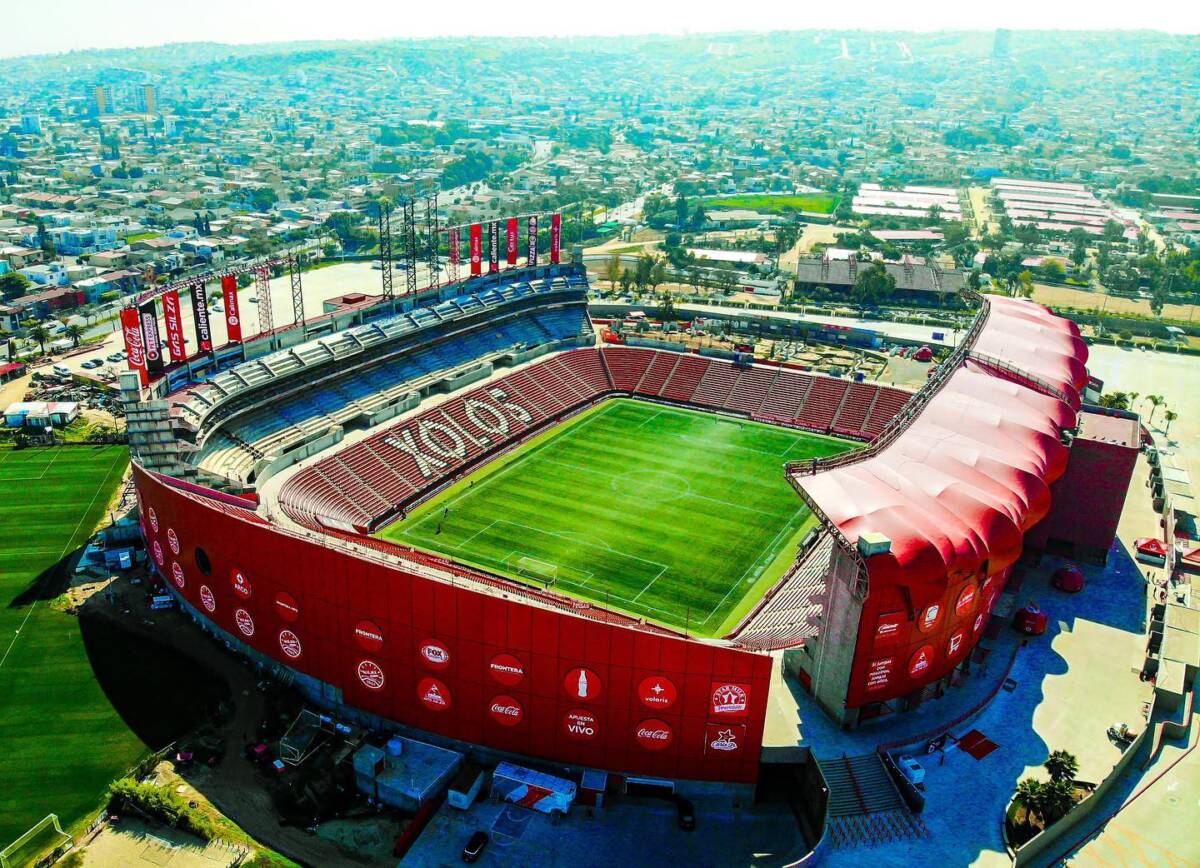 With just one hour to go until the match between Xolos and Santos kicks off at the Estadio Caliente in Tijuana, can the laguneros side maintain their undefeated record, even with their losses? Don't miss all the details of this match on VAVEL.
10:09 PMa month ago

Do not miss a detail of the match Xolos Tijuana - Santos Laguna with the live updates and commentaries of VAVEL. Follow along with us all the details, commentaries, analysis and lineups for this match.
10:04 PMa month ago

How to watch Xolos Tijuana - Santos Laguna Live Stream on TV and Online?

If you want to watch the game Xolos Tijuana vs Santos Laguna live on TV, your options are: TUDN USA

Matheus Dória | The Santos' defender, who has already started his naturalization process, is one of the pillars of the defensive line and, after the absences that Santos will have for this match, Dória will have to lead and be a 'wall' to prevent goals. 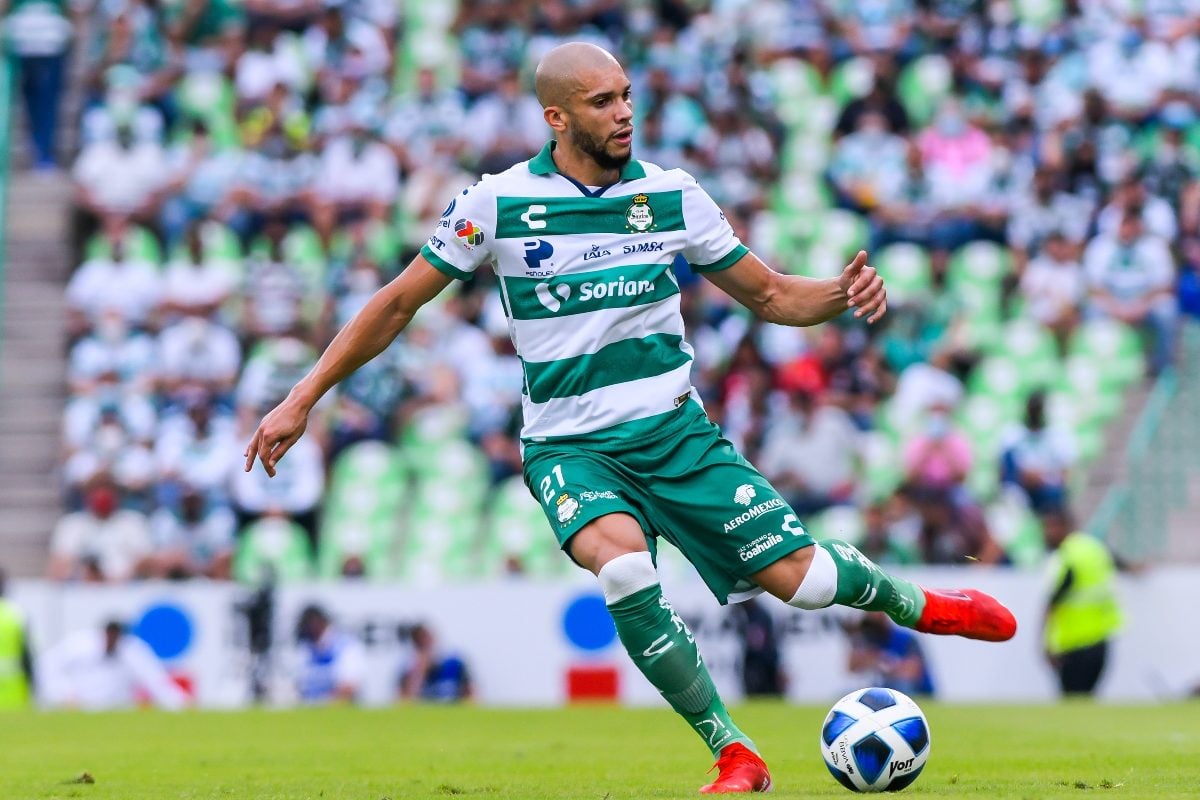 Mauro Manotas | The Colombian, who had a great tournament last season, must find the goal again so that his team can aspire to victory. He is an undisputed starter in Siboldi's team and has just scored a goal in the last matchday; a goal that gave his team a tie. 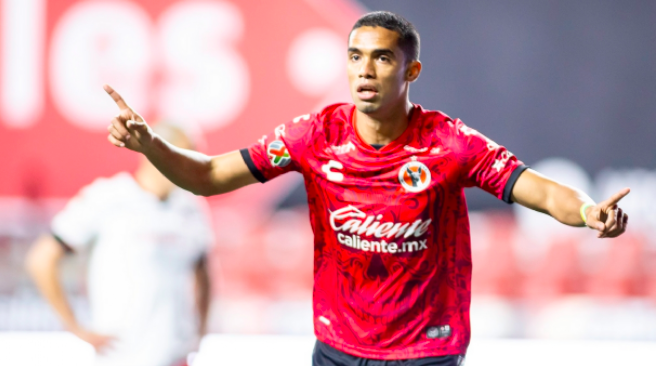 Santos: Continue with the unbeaten streak

Santos Laguna, coached by Guillermo Almada, is one of the three clubs that are still undefeated in the current tournament; however, they have been unable to be convincing and although they have not achieved many victories, the green-and-white team continues with the aspirations of reaching the first four places. Santos will go into this match in fifth place after five draws and two wins. In matchday 7, the laguneros were able to win at home against Bravos de Juárez. 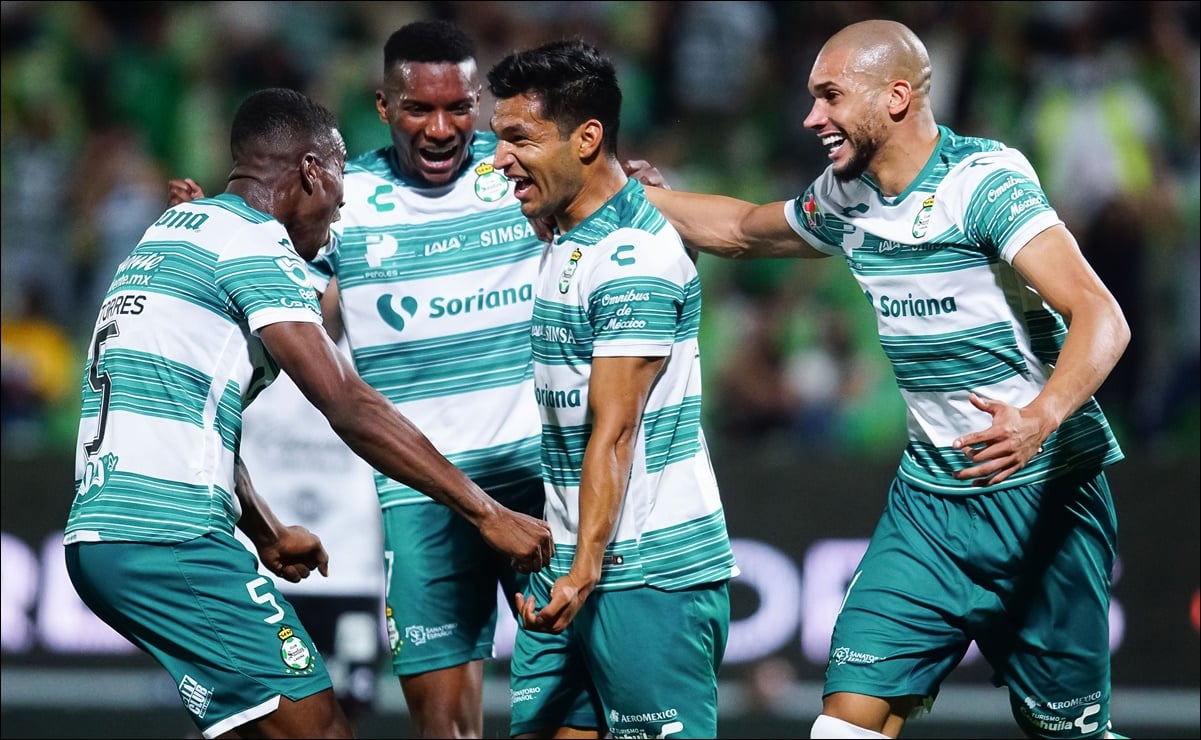 Tijuana: In need of three points

Xolos de Tijuana have not had a good start to the tournament and have not been able to get out of the last places along with Querétaro and Bravos de Juárez. The team coached by Siboldi has not won in the league for more than four months, their last victory was against Necaxa in April of this year, which is why it is vital to start adding up if they do not want to have problems in the quotient. Three draws and four defeats are the results that have the Xolos in the basement of the table. Their most recent match was against Rayados, in a game in which they were able to rescue a draw after being 0-2 down on the scoreboard. 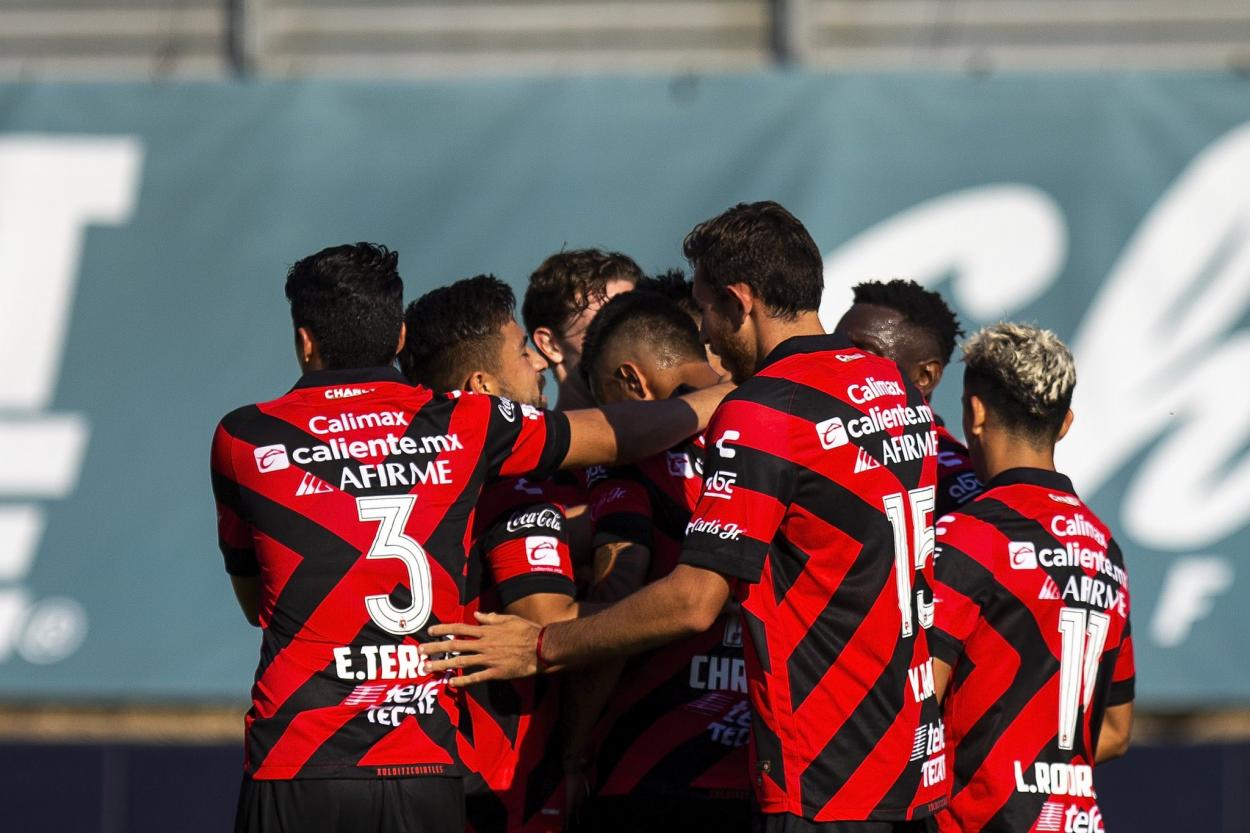 The match will be played at the Stadium Caliente

The Xolos Tijuana vs Santos Laguna match will be played at the Caliente Stadium, in Tijuana, Mexico. The kick-off is scheduled at 10 pm ET.
9:19 PMa month ago

Maryland Bobcats FC vs Chicago House AC preview: How to watch, kick-off time, predicted lineups, and ones to watch 18 hours ago
//