I would like to thank you here at VAVEL for listening to another Portuguese League match. Have a good afternoon and see you next time!
2:54 PM12 days ago

Luiz Felipe shot for goal and Odysseas sprawled out!
2:49 PM12 days ago

Replacement in Santa Clara: left Mansur and Lincoln to the entry of Jean Patric and Julio Romão.
2:45 PM12 days ago

Double substitution in Benfica: Diogo Gonçalves and Cebolinha left for Pizzi and Lazaro.
2:29 PM12 days ago

Now it's Yaremchuk's turn! A cross from the left from Grimaldo, he just put his foot in and the ball went into the back of the net!
2:25 PM12 days ago

Substitution in Benfica: Darwin Nuñez and João
Mario for the entry of Yaremchuk and Gedson Fernandes.
2:23 PM12 days ago

Darwin was launched in front, took two markers and hit, with deviation, to the bottom of the goal, making the score!
2:19 PM12 days ago

Rafa Silva shot from a distance and sent it into the left corner of the goal, making a great goal from outside the area!
2:14 PM12 days ago

Jimmy Five got a BEAUTIFUL pass to Darwin, who received, carried, and hit a low shot to beat the goalkeeper and extend the score!
2:09 PM12 days ago

The ball is already rolling for the second leg of Santa Clara and Benfica!
2:05 PM12 days ago

The teams appear on the field to start the second half. And in Benfica left Rodrigo Pinho for the entry of Rafa Silva.
1:50 PM12 days ago

Ends the first half and until then Benfica is beating Santa Clara by 1-0, with Rodrigo Pinho's goal!
1:50 PM12 days ago

Yellow card to Rafael Ramos, for holding Grimaldo in the midfield.

Rodrigo Pinho was launched on the left by Grimaldo and unleashed his foot to beat Marco, opening the score!
1:42 PM12 days ago

Lincoln hit a hard shot from far away and Odysseas sprawled over the goal!
1:32 PM12 days ago

Lincoln hit the free-kick hard and hit the crossbar. In the sequence Lincoln himself hit hard and sent it into the hands of the goalkeeper!
1:30 PM12 days ago

Odysseas is yellow carded for going completely wrong in his challenge on Mansur. He made the foul on the edge of the area and Santa Clara has a dangerous chance!
1:27 PM12 days ago

In a corner kick coming from the left, the ball was deflected and stayed with Crysan in the small area, who didn't finish and was blocked afterwards!
1:26 PM12 days ago

Benfica keeps possession of the ball, while Benfica tries for counterattacks.
1:11 PM12 days ago

Rui Costa makes the first shot of the match, at the hands of Odysseas.
1:02 PM12 days ago

Crysan makes the first touch on the ball and it rolls into the first half of the match!
1:01 PM12 days ago

A minute's silence is now observed before the match.

The teams appear on the field for the ball to roll for the first half of the match!
12:42 PM12 days ago

The players leave the pitch to finish their preparation and the ball starts rolling!
12:42 PM12 days ago

This game you can follow now is isolated in the schedule. Later on Sporting receives Porto.
12:35 PM12 days ago

The fifth round of the Portuguese Championship started today, with the match between Paços de Ferreira and Braga, which ended in a scoreless draw.
12:25 PM12 days ago

The players take to the field to begin their warm-up exercises.
12:19 PM12 days ago

Santa Clara is lined up for the match and comes with: 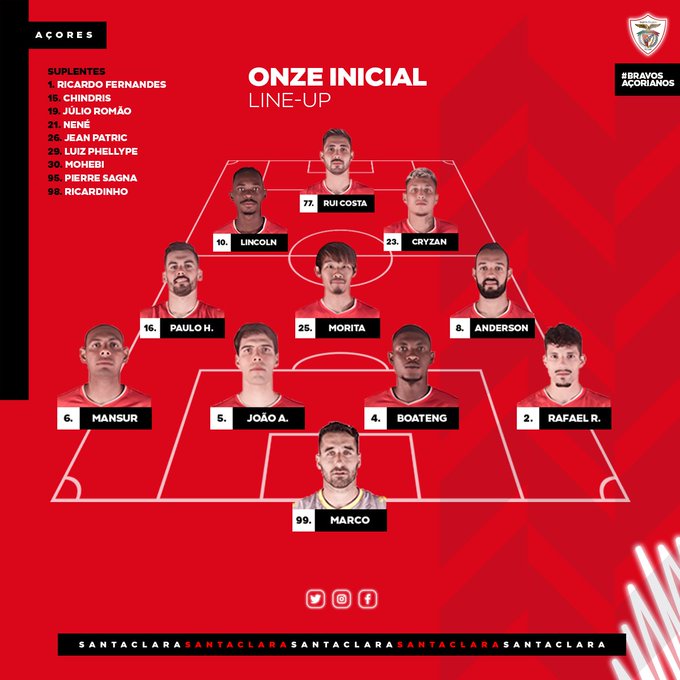 Benfica is lined up for the match and comes with: 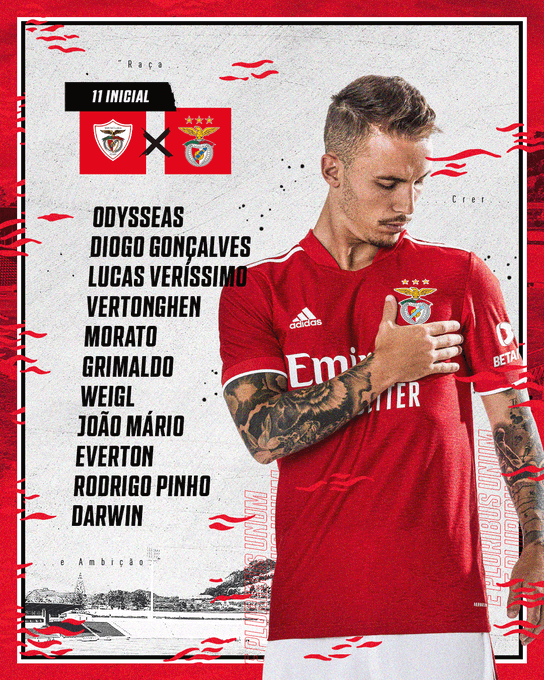 Now begins the broadcast of the Premier League match between Santa Clara and Benfica!
12:08 PM12 days ago

Do not miss a detail of the match with the live updates and commentaries of VAVEL. Follow along with us all the details, commentaries, analysis and lineups for this Santa Clara vs Benfica match.
12:03 PM12 days ago

How to watch Santa Clara vs BenficaLive in TV and Stream

If you want to watch the game Santa Clara vs Benfica  live directly stream it: Streaming services and Bet 365 app.

The probable Benfica team is: Vladichodimos, Lucas, Otamendi and Vertoghen; Gonçalves, Gilberto, João Mario and Grimaldo; Pizzi, Yaremchuk and Ramos.
11:48 AM12 days ago

The probable Santa Clara for the match is: Fernandes, Ramos, Afonso, Villanueva and Mansur; Carvalho, Morita, Costa, Lincoln and Patric; Cryan.
11:43 AM12 days ago

Santa Clara will not be able to use the suspended Allano, while Costinha and Gonzalez are out with injuries. Benfica is without Ferro, the only one injured for the match.
11:38 AM12 days ago

Benfica leads the championship, with 12 points, followed closely by Sporting, Porto and Estoril, all with 10 points. Santa Clara is in 12th place, in the block of teams with four points, along with Marítimo and Vizela.
11:33 AM12 days ago

Benfica comes from a win and a draw in the last matches. Against Tondela, on August 29, Benfica won with goals from Rafa and Gilberto, while Agra scored for Tondela, closing the score 2-1. The 0-0 draw was away from home against PSV in the Champions League. With a 2-1 victory in the first leg, Benfica qualified for the Champions League group stage.
11:28 AM12 days ago

Santa Clara comes into the match after a loss and a win in their last two matches. Visiting against Boavista, Santa Clara left the field defeated on August 23. Hamache and Sauer scored the goals in the 2-0 win for Boavista. Against Gil Vicente, at home, Rui Costa scored the only goal in the victory for the home team, by 1-0, on August 29.
11:23 AM12 days ago