Thank you for listening to this La Liga match. Stay tuned here for the repercussions of this game. Have a good morning, and see you next time!
10:03 AM4 days ago

OUTRAGE! With goals from Lemar, who came off the bench, Atleti beat Espanyol away from home!

Lemar received another ball inside the area and in the end of the injury time hit the back of the net, turning the match for Atleti!
9:57 AM4 days ago

Carrasco received a yellow card for reaching out to the Espanyol player.
9:52 AM4 days ago

Carrasco received the ball in the box and hit a cross from the right, sending it dangerously wide!
9:50 AM4 days ago

Yellow card to Kondogbia, for leaving his arm on an Espanyol player in the field of attack. Espanyol have a substitution: De Tomas goes out and Dimata comes in.
9:39 AM4 days ago

Espanyol changes: Aleix Vidal leaves for Melamed.
9:30 AM4 days ago

Substitution in Atlético de Madrid: Luis Suárez left and Matheus Cunha came in.
9:18 AM4 days ago

Double substitution in Espanyol: Morlanes and Melendo left to enter Loren and Bare. And at Atleti Griezmann left to enter João Félix.
9:15 AM4 days ago

The goal was disallowed because Suarez was offside on the play, passing close to catching the ball that Llorente crossed!
9:13 AM4 days ago

In the move to the right, Llorente crossed low and Lemar was there to send the ball into the back of the net, equalizing the match!
9:10 AM4 days ago

Lemar took a chance from outside the area and sent it wide of the goal.
9:07 AM4 days ago

Griezmann gets his first touch on the ball and it rolls into the second half for Espanyol!
9:07 AM4 days ago

The teams return to the pitch to start the second half. At Atleti left Hermoso, Trippier and Correa for Renan Lodi, Kondogbia and Lemar. For Espanyol, Calero is out, Vives is in.
8:48 AM4 days ago

With a goal from De Tomas, Espanyol goes on to beat Atlético de Madrid in La Liga!
8:42 AM4 days ago

Carrasco received inside the area and shot hard, but in the stands.
8:41 AM4 days ago

And in the corner coming from the left, Raul De Tomas was higher than the defense and diverted the ball to the left corner, covering Oblak and opening the score!
8:40 AM4 days ago

Embarba decided to test Oblak and hit a hard shot from outside the area, but the goalkeeper kept it over the goal!
8:32 AM4 days ago

Embarba's free-kick is picked up by the defense and deflected away.
8:32 AM4 days ago

Hermoso is yellow carded for a hard tackle on Aleix Vidal on the right side of the penalty area. Danger is coming!

De Tomas was launched, came out in the face of the goal, took Onlak and hit, but under the crossbar Felipe took away, but De Tomas was already offside.
8:15 AM4 days ago

Melendo got a good move and hit a cross, but straight away.
8:05 AM4 days ago

Savic left the ball thinking there was a defender nearby and Embarba hit it hard, but Oblak saved it for a corner!
8:00 AM4 days ago

De Tomas takes the first touch on the ball and it rolls into the first half of Espanyol and Atleti!
7:57 AM4 days ago

The teams already appear on the field to start the match!
7:43 AM4 days ago

Tomorrow, closing the round, Getafe plays against Elche, while Granada faces Betis.
7:43 AM4 days ago

This match you can follow here is isolated at this time. Also today we have Osasuna and Valencia, Cadiz and Real Sociedad and Real Madrid and Celta de Vigo.
7:42 AM4 days ago

The fourth round of La Liga started yesterday, with Leavnte and Rayo Vallencano drawing 1-1, while Athletic Bilbao beat Mallorca 2-0.
7:38 AM4 days ago

The players appear on the field to begin their warm-up work.
7:37 AM4 days ago

Atleti, on the other hand, also comes with novelties. In defense Felipe will start, in midfield Correa, and Suárez will start up front alongside the newcomer to the Colchonera jersey: Griezmann.
7:22 AM4 days ago

Atlético is selected for the match and comes to the field with: 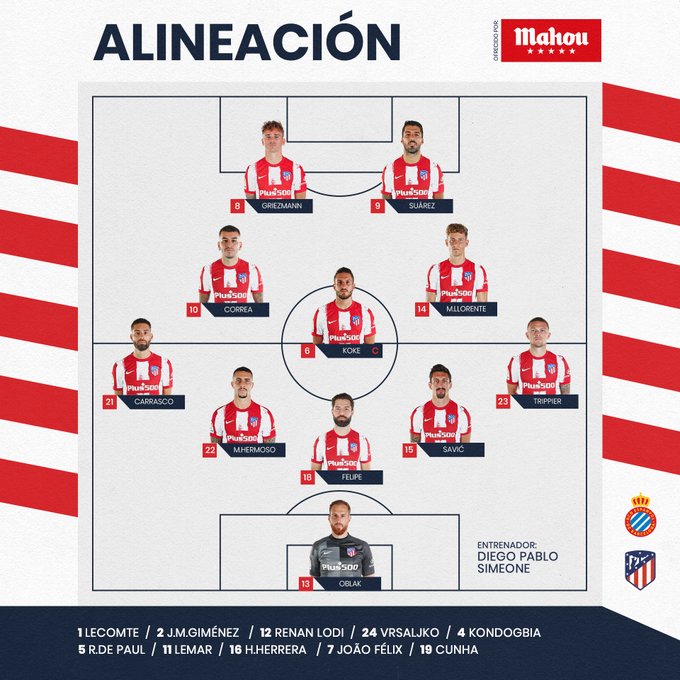 Espanyol comes with news for the match of tonight. In defense comes Calero, in the middle comes Melendo and in the attack comes Aleix!
7:12 AM4 days ago

Espanyol has a line-up for the match: 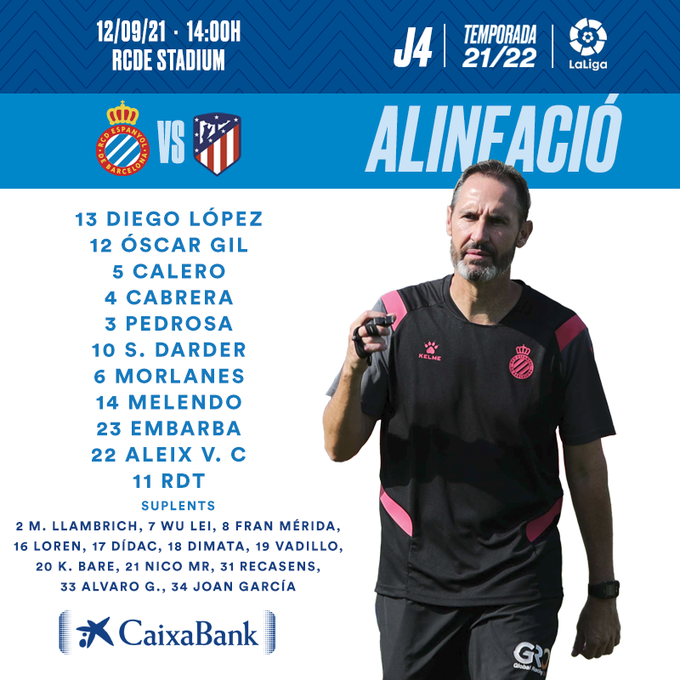 Now begins the broadcast of the La Liga match between Espanyol and Atlético de Madrid!
7:02 AM4 days ago

Do not miss a detail of the match with the live updates and commentaries of VAVEL. Follow along with us all the details, commentaries, analysis and lineups for this Espanyol vs Atletico de Madrid match.
6:57 AM4 days ago

If you want to watch the game Espanyol vs Atletico de Madrid live on TV, your options is: none.

What time is Espanyol vs Atletico de Madridmatch for La Liga?

This is the start time of the game Espanyol vs Atletico de Madrid of 12th september 2021 in several countries:

Martínez Munuera will referee the match at the Cornella El Prat.
6:42 AM4 days ago

The probable line-up for the match is: Oblak, Savic, Gimenez and Hermoso; Trippier, Lemar, Koke, Llorente and Carrasco; Correa and Griezmann. 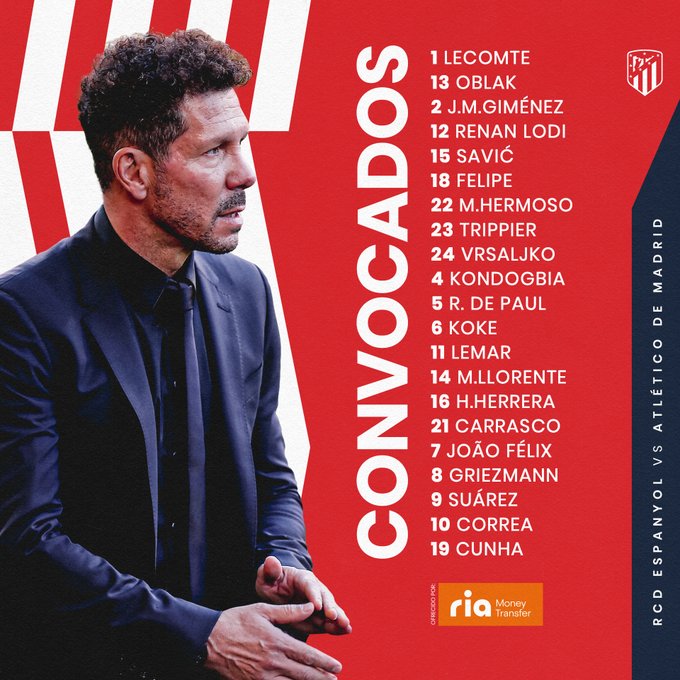 Espanyol will not be able to use Herrera, injured, while Sergi Gómez is suspended for the match. Atleti will already be able to use Griezmann, who is tipped to start, while Suarez is - possibly - out due to injury.
6:27 AM4 days ago

Espanyol is flirting with the relegation zone, standing with two points, tied with Cadiz, Betis, Elche and Granada, the latter in 17th position. The first in the zone is Celta, with one point. Already the Atleti is in 6th place with seven points, tied with Real Madrid, Sevilla, Valencia, Barcelona and Mallorca, the latter the only one that is behind in the positions.

Atlético de Madrid, on the other hand, are coming from a draw and a win in their last games. Against Villarreal came the draw, 2-2, on August 29. On the day Manu Trigueros opened the scoring, but soon after Suarez equalized. Arnaut scored and put Villarreal in front, but Mandi, against, equalized in stoppage time, all in the second half. And against Elche, on the 22nd, a simple victory, with a goal by Angel Correa.
6:17 AM4 days ago

Espanyol come into the match after a defeat and a draw. Against Mallorca, on August 27, came the defeat, 1-0, when Daniel Rodríguez scored the winning goal for Mallorca. Against Villarreal, at home, on the 21st, Espanyol drew 0-0.
6:12 AM4 days ago