Thank you for listening to this Europa League match here on VAVEL. Have a good night and see you next time!
4:53 PMa month ago

With goals from El Arabi and Reabciuk, Olympiacos beat Antwerp, who even drew with Samatta, in the first round of the Europa League!
4:46 PMa month ago

On the back line play from the left, the ball was played back to where Reabciuk to finish high, no chance for Butez, making the second of Olympiacos!
4:33 PMa month ago

On the cross coming from the right Samatta threw himself on the ball and put it in the back of the net, equalizing the match!
4:28 PMa month ago

From another cross in the box, El Arabi managed to get a deflection and this time was in a legal position to send the ball into the right corner of Butez, who could do nothing with his strong header!
4:03 PMa month ago

Camara takes the first touch on the ball and it rolls into the second half!
4:02 PMa month ago

The players appear on the pitch to start the second half!
3:48 PMa month ago

END OF FIRTS HALF

With no goal, the match goes to halftime with a tie!
3:43 PMa month ago

Fischer received on the left from Frey and hit a cross, seeking the left corner, but sent it wide!
3:40 PMa month ago

In the ball played in the area El Arabi got a good shot and sent it to the left corner of Butez, who could do nothing, but the shot was disallowed by a millimeter offside.
3:31 PMa month ago

From a free-kick on the left Bouchalakis lifted it into the area and Cisse's header deflected off the left side of the goal!
3:21 PMa month ago

Camara received the ball in the middle, carried it, and hit it low into the hands of Butez.
3:06 PMa month ago

Yellow for Verstraete, for a foul on the right, which was lifted into the area and Butez got it high.
3:03 PMa month ago

From Miyoshi's cross from the right, Samatta headed hard, but over the goal!
3:01 PMa month ago

Frey takes the first touch on the ball and it rolls into the first half of Olympiacos and Antwerp!
2:58 PMa month ago

The teams appear on the field to start the match!
2:39 PMa month ago

At the same time, Monaco vs. Sturm, Rangers vs. Lyon, PSV vs. Real Sociedad, Brondby vs. Sparta Prague, Leicester vs. Napoli, and Eintracht Frankfurt vs Fenerbahçe.
2:39 PMa month ago

The entire Europa League round will be played today, except for only one match, which took place yesterday: Spartak Moscow 0x1 Légia Warsaw.
2:30 PMa month ago

The players appear on the field to start warming up.
2:11 PMa month ago

Royal Antwerp is lined up and comes to the match with: 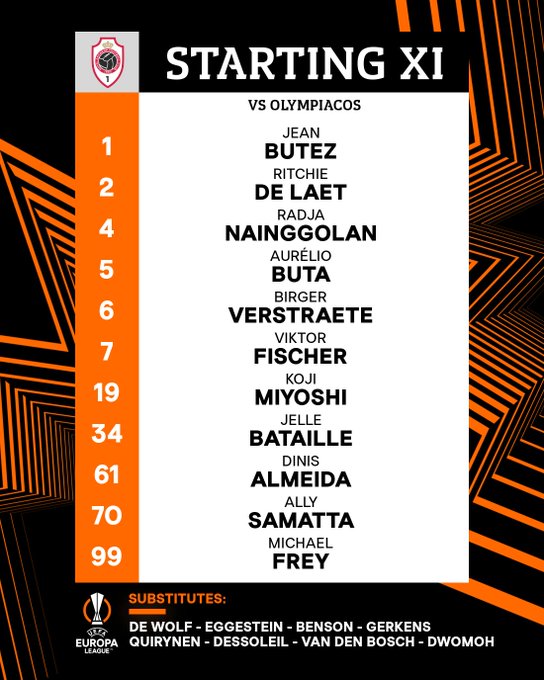 Olympiacos is lined up and comes to the match with: 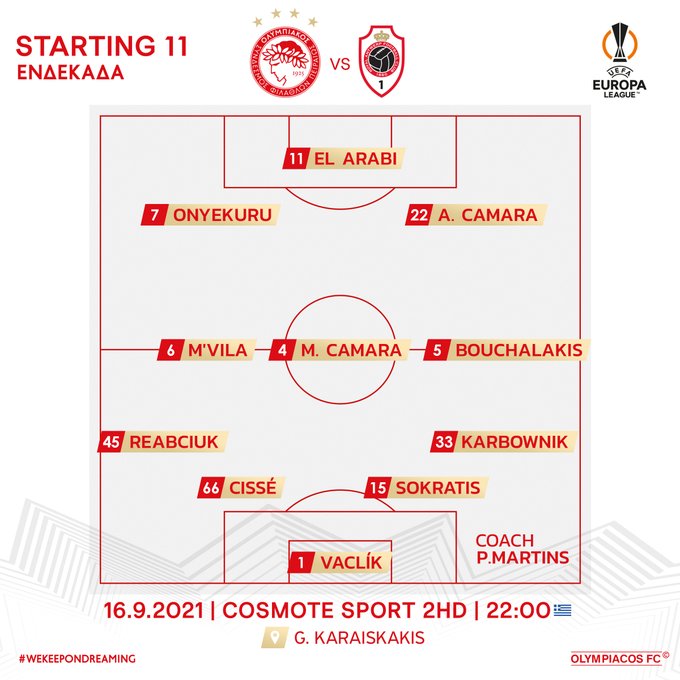 Now the broadcast of the Europa League match between Olympiacos and Royal Antwerp begins!
1:56 PMa month ago

Do not miss a detail of the match with the live updates and commentaries of VAVEL. Follow along with us all the details, commentaries, analysis and lineups for this Olympiacos vs Royal Antwerp match.
1:51 PMa month ago

How to watch Olympiacos vs Royal AntwerpLive in TV and Stream

If you want to watch the game Olympiacos vs Royal Antwerp live on TV, your options is: none.

If you want to directly stream it: Streaming services and TUDUN and Paramount+ app.

What time is Olympiacos vs Royal Antwerp match for Europa League

This is the start time of the game Olympiacos vs Royal Antwerp of 16th September 2021 in several countries:

Tamás Bognár will referee the match, with assistants Balázs Buzás and Péter Kóbor, with the whole trio coming from Hungary. VAR will be under the command of Italian Marco Guida.
1:36 PMa month ago

The probable line-up for the match is: Vaclick, Reabciuk, Cisse, Sokratis and Ba; Onyekuru, Lopes, M'Villa and Valbuena; Soares and El Arabi. 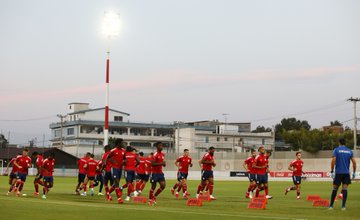 Konstantinos Fortounis is the only absentee from the match for Olympiacos, who will have the return of goalkeeper Vaclick, who was injured. Antwerp will be without Balikwisha, Haroun, VInes and Yusuf, all injured, as well as Coopman and Nsimba, who are doubts.
1:21 PMa month ago

Antwerp is in group D of the Europa League, together with Olympiacos, Fenerbahçe and Eintracht Frankfurt. Olympiacos has one point in the Greek league, along with Asteras, Atromitos, Paetolikos and OFI, in only one round played so far. And with eight points from six games Antwerp is in 12th place, tied with Zulte-Waregem and Cercle Brugge.
1:16 PMa month ago

Antwerp have a draw and a win in their last two games, both in the Belgian Championship. Against KAS Eupen, last Saturday (11), the victory came in 1-0, with a goal from Michael Frey. And on the 29th, the tie came against Leuven. Maertens opened the scoring, against, and Frey made it 2-0, but Ozkacar and Shengelia tied the game.
1:11 PMa month ago

Olympiacos comes from two games where they drew both matches. The last one was against Atromitos, last Sunday (12), in a scoreless match. And the previous one, in a friendly against Aris, another draw, now 1-1, on Friday (3).
1:06 PMa month ago