Thank you for listening to this Premier League match. Have a good afternoon, and see you next time!
11:57 AMa month ago

With goals from Sarr, twice, and Dennis, Watford beat Norwich, who got a goal back from Pukki!
11:50 AMa month ago

Sarr burst into the box on the right, tried to get a touch over the top, but Krul saved Norwich!
11:48 AMa month ago

Substitution in Norwich: Rashica is out and Idah is in.
11:43 AMa month ago

Watford substitution: Cleverly out, Etebo in.
11:42 AMa month ago

King received a good pass inside the box, hit it and Krul saved. On the rebound Sarr put the ball into the net, making the third goal for Watford away from home! The goal was being disallowed for offside, but VAR corrected the error!
11:36 AMa month ago

Rashica's shot from the edge of the box was saved by Foster!
11:33 AMa month ago

Substitution at Watford: Dennis is out, Sema is in.
11:30 AMa month ago

Substitution at Norwich: Sargent and Normann leave for Tzolis and Cantwell.
11:24 AMa month ago

Sarr once again! Now already inside the area, Kng received on the right and crossed back, where Sarr was to divert it to the back of the net!
11:19 AMa month ago

Watford substitution: out goes Femenia and in comes Ngakia.
11:08 AMa month ago

Dennis makes the first touch on the ball and it rolls into the second half!
11:07 AMa month ago

TEAMS ON THE PITCH

The teams appear on the field to begin the second half of the match!
10:53 AMa month ago

In an intense game, Dennis opened the scoring and Pukki tied the score in the first half!
10:51 AMa month ago

Sarr received a beautiful long pass, got in Krul's face and got in his touch over the goalkeeper, who saved it for a corner!
10:50 AMa month ago

Sargent had the ball inside the box after anticipating Watford's exit and found Pukki in the middle, who hit and sent it over the goal!
10:47 AMa month ago

Sarr received the ball in the middle and hit it hard, low, but in the hands of Krul, in the right corner!
10:40 AMa month ago

Pukki was released in front of Foster, came out in front of him and hit the ball high in the box to tie the game!
10:23 AMa month ago

Dennis, on a cross from the right, threw himself on the ball to send it into the right corner of Krul, who could do nothing!
10:18 AMa month ago

Normann hit a front free-kick straight at goal and sent it into Foster's hands.
10:15 AMa month ago

Sargent tried to deflect a cross into the box and sent it out of danger.
10:05 AMa month ago

Pukki makes the first touch on the ball and it rolls into the first half!
10:03 AMa month ago

The teams appear on the field to start the match!
9:38 AMa month ago

And to round off this Saturday's games Aston Villa face Everton. Tomorrow at 10 a.m. Brighton play against Leicester and West Ham host Manchester United. At 12:30 pm, Tottenham face Chelsea in another big six match.
9:38 AMa month ago

Round 5 started yesterday with just one match, the 1-1 draw between Newcastle and Leeds United. And earlier today Brentford beat Wolverhampton 2-0.
9:31 AMa month ago

The players appear on the field to begin their warm-up work for the match.
9:25 AMa month ago

Receiving Watford, Norwich have played 39 times, with 21 wins, eight draws and 10 defeats. Per the Premier League it is only seven games, with four wins, one draw and two defeats.

There are 79 matches in history between Norwich and Watford, with 31 Norwich wins, 21 draws and 27 Watford wins. In the Premier League, there are 14 matches, with six Norwich wins, three draws, and five Watford wins.
9:15 AMa month ago

Watford have a line-up for tonight's match that includes: 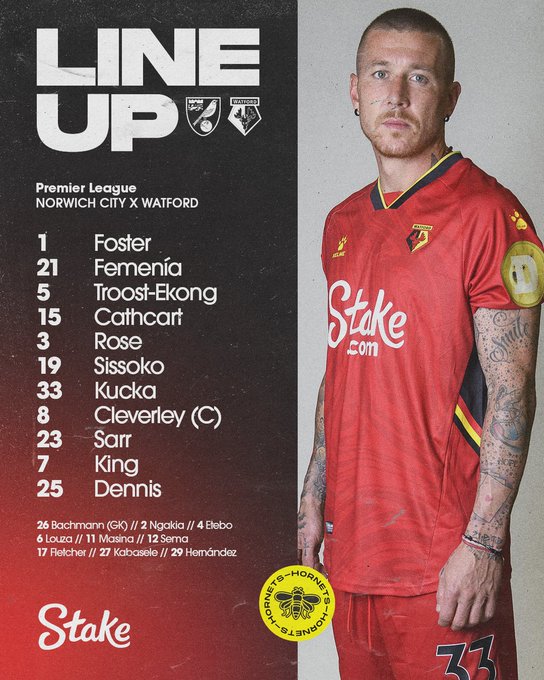 Norwich have a line-up for tonight's match: 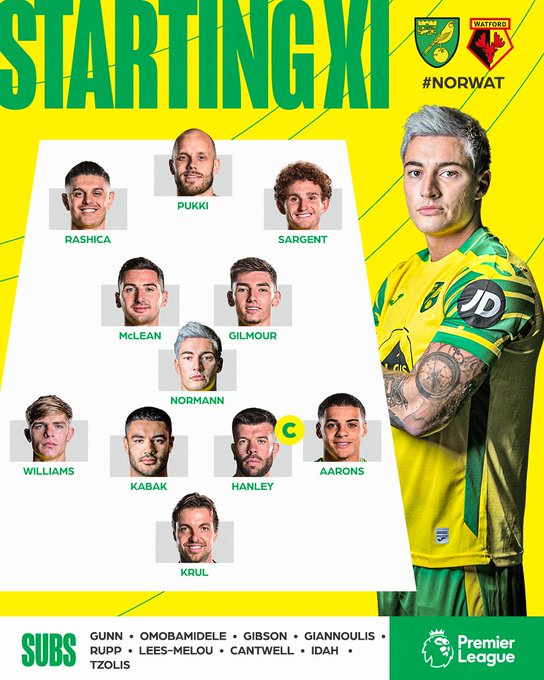 Now the broadcast of the Premier League match between Norwich and Watford begins!
9:00 AMa month ago

Do not miss a detail of the match with the live updates and commentaries of VAVEL. Follow along with us all the details, commentaries, analysis and lineups for this Norwich vs Watford match.
8:55 AMa month ago

How to watch Norwich vs WatfordLive in TV and Stream

If you want to watch the game Norwich vs Watford live on TV, your options is: none.

If you want to directly stream it: Streaming services and Peacock app.

What time is Norwich vs Watford match for Premier League?

This is the start time of the game Norwich vs Watford in several countries:

Robert Jones will referee the match, with assistants Scott Ledger and Derek Eaton. The fourth official will be Tim Robinsons, with Graham Scott in charge of VAR.
8:40 AMa month ago 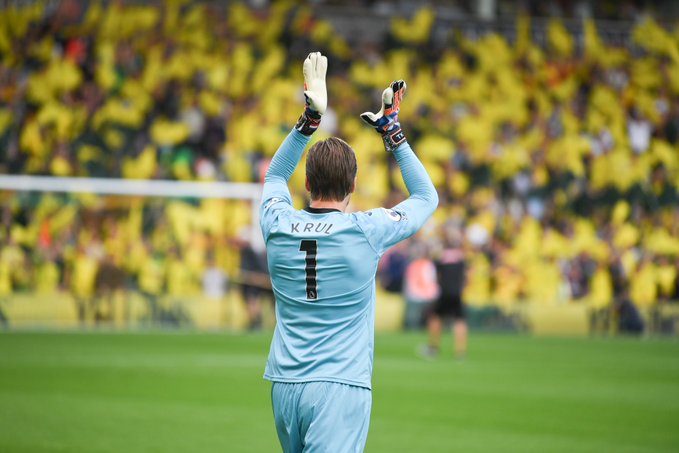 Norwich will still be without the injured Sam Bryam, Zimmermann and Bali Mumba. Placheta is a doubt after testing positive for Covid-19, while Melou has had the flu and it is not yet known if he will have a chance to play. Sargent and Giannoulis should be available after recovering from injuries. Watford, meanwhile, will be without Joao Pedro, who is injured, along with the doubt that is Dan Gosling, who was ill.
8:25 AMa month ago

Both teams find themselves at the bottom of the Premier League table. Watford have three points from four games, tied with Wolverhampton, Southampton, Leeds United and Arsenal and are in 15th place. Norwich, meanwhile, have no points yet in the competition from four matches, and are thus bottom of the league.
8:20 AMa month ago

Watford comes in the same way as its opponent. It is two defeats in the last two games. Against Wolverhampton came the first, last Saturday, by 2-0 at home. Sierralta and Hee-chan scored the goals. And before that, on August 29, the defeat was away to Tottenham, 1-0, with a goal by Son.
8:15 AMa month ago

Norwich comes from two defeats in the last two games. Against Arsenal, last Saturday (11), the defeat was 1-0, with Aubameyang scoring. Against Leicester, on the 28th, the defeat was 2-1, with Vardy opening the scoring early on, Pukki equalizing and Albrighton scoring Leicester's winning goal in the second half.
8:10 AMa month ago