Thank you here for your audience at this Eredivisie match, have a good afternoon and see you next time!
3:53 PMa month ago

With an incredible nine goals, Ajax beats Cambuur at home!
3:44 PMa month ago

Daramy received from Berghuis in the back line, took away the marker and played to David Neres, in the small area, who hit the empty goal!
3:44 PMa month ago

Double substitution in Cambuur: Boere and Maulun left to enter Sambissa and Krastev.
3:37 PMa month ago

David Neres tabulated with Danilo and crossed to himself, who received in front and hit to also make his own in the match!
3:34 PMa month ago

In a free-kick raised in the area the defense didn't take it away and Haller hit it to the bottom of the goal, making one more!
3:25 PMa month ago

Daramy tried to play on the left, was disarmed and he himself stole the ball, receiving it from Taylior inside the area to hit a cross and make the sixth
3:21 PMa month ago

On David Neres' lift in the box from the right, Tadic shot, catching the ball on the ear, but sending it into the corner to extend the score! And at the moment of the goal we had substitutions: Tadic, Alvarez, and Tagliafico left for Daramy, Taylor, and Blind.
3:09 PMa month ago

David Neres received on the right, took to the back line and crossed to Berghuis that, in the small area, sent over the goal!
3:09 PMa month ago

David Neres took it from the right into the middle and hit it hard into the goal, but into Stevens' hands.
3:05 PMa month ago

The ball is already rolling again for the match at the Amsterdam Arena!
3:05 PMa month ago

The teams take the field again and we have substitutions. In Cambuur Jacobs is out and Van der Meer is in. And in Ajax left Mazraoui for Schuurs.

With four goals in 45 minutes, Ajax goes on to massacre Cambuur at home!
2:40 PMa month ago

From another cross from the left, now David Neres finished with a beautiful high volley to beat the goalkeeper and turn it into a goal!
2:31 PMa month ago

On the left side, Martinez crossed backwards and Mazraoui hit the ball hard, sending it into the back of the net!
2:25 PMa month ago

Gravenberch crossed back and Haller got in a shot, but goalkeeper Stevens kept it.
2:21 PMa month ago

At the low cross, in a short corner, Berghuis got the shot on high and extended the score!
2:21 PMa month ago

Timber stole the ball, charged forward, tabbed with Berghuis and got the finish, opening the score!

As usual, Ajax dominates Cambuur, who tries at speed, but neither team has been able to create clear chances so far.
2:02 PMa month ago

Tadic takes the first touch on the ball and it rolls into the first half of Ajax and Cambuur!
2:00 PMa month ago

The players appear on the field to start the match!
1:38 PMa month ago

Today we still have Utrecht and RKC and tomorrow morning we have Go Ahead Eagles vs Zwolle.
1:32 PMa month ago

So far Williem goes 2-0 up against Groening and today's game is isolated in the schedule.
1:31 PMa month ago

Round 5 of the Eredivisie started yesterday with a 1-1 draw between Sparta Rotterdam and NEC. Earlier today Heereveen beat Fortuna Sittard 1-0.

The players appear on the field to begin their warm-up work.
1:17 PMa month ago

Cambuur is scheduled for the match and comes to the field with: 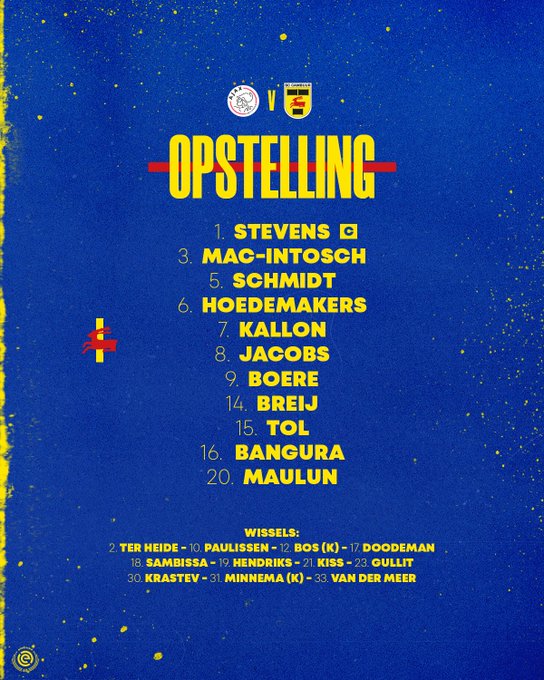 Ajax has been lined up for the match and will take the field with: 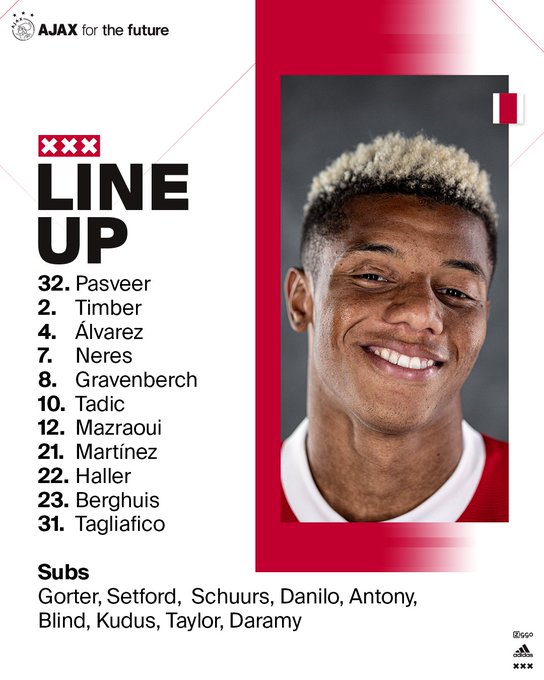 Now the broadcast of the Eredivisie match between Ajax and Cambuur begins!
1:05 PMa month ago

Do not miss a detail of the match with the live updates and commentaries of VAVEL. Follow along with us all the details, commentaries, analysis and lineups for this Ajax vs Cambuur match.
1:00 PMa month ago

How to watch Ajax vs Cambuur Live in TV and Stream

If you want to watch the game Ajax vs Cambuur live on TV, your options is: none.

What time is Ajax vs Cambuur match for Premier League?

This is the start time of the game Ajax vs Cambuur in several countries: 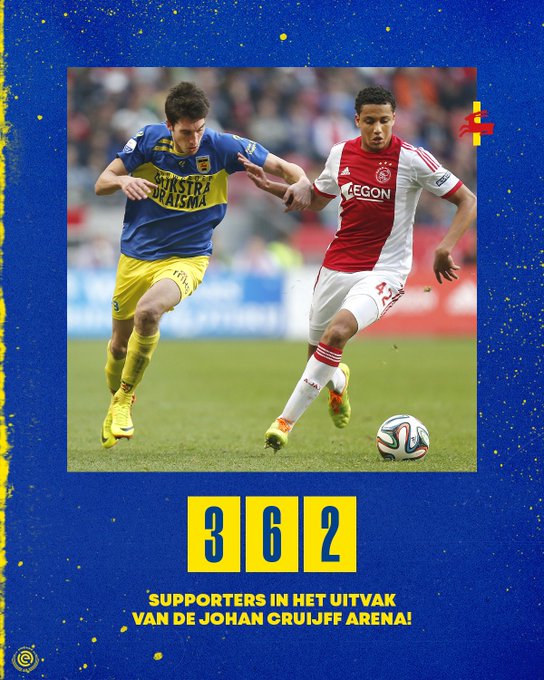 Injured Klaassen and Stekelenburg are out of the match, along with the other injured Klaiber and Kudus. Cambuur are at full strength for the match.
12:35 PMa month ago

Ajax are in second place in the competition, with 10 points, two behind Eredivisie leader PSV. Cambuur are on six points, in eighth place, tied with Feyenoord and Vitesse, and one ahead of Groningen and Sparta Rotterdam.
12:30 PMa month ago

Cambuur is also coming off two wins. The first by a 5-2 home win over the Go Ahead Eagles last Saturday. Boere (2), Tol, Jacobs, and Kiss scored the goals for the hosts, while Brouwers and Cordova chipped in for the visitors.
12:25 PMa month ago

Ajax comes from two wins to the match. The first was last Wednesday (15), when they beat Sporting 5-1 away from home. Haller scored FOUR goals in the match, with Berghuis closing the scoring. João Paulo scored the other goal. And before that, on Saturday (11), Ajax beat Zwolle 2-0, with goals from Haller, twice.
12:20 PMa month ago

Welcome to VAVEL.com’s coverage of the 2021-22 Eredivisie match: Ajax vs Cambuur Live Score!