That's it for now. Thank you to those of you who joined us. We hope you enjoyed this game of the Serie A. Visit the VAVEL portal to keep up to date with all the information, upcoming games, interviews, latest news an that comes up throughout the day.
5:13 AMa month ago

48' Referee blows the whistle! Gianluca Manganiello signals the end of the second half at the Dacia Arena. Napoli confirm their favoritism and take a provisional lead in the Serie A.
4:44 PMa month ago

47' Elmas carries the ball through the middle and sets up Ounas on the right, he invades the area and faces Silvestri, but he shoots wide
4:44 PMa month ago

44' Pussetto shoots a shot from outside the box into the right corner of the colombian goalkeeper, who jumps up and slaps it away with his right hand to prevent Udinese's goal

41' Alessandro Zanoli in place of Mario Rui
4:38 PMa month ago

39' LOZANO! Mario Rui tables with the mexican on the left wing, he fills his right foot and hits the cheek of the net
4:38 PMa month ago

36' Andrea Petagna and Adam Ounas in, Osimhen and  Fabian Ruiz out
4:30 PMa month ago

33' Mario Rui shoots a left-footed shot from the edge of the box, Silvestri stretches out and pulls it back, but nobody gets the rebound
4:27 PMa month ago

31' Samardžić shoots with his left foot from outside the box, but the ball goes to Ospina's left
4:27 PMa month ago

27' Zeegelaar and Samardžić in, Stryger Larsen and Arslan out
4:27 PMa month ago

26' Zieliński and Lozano in, Insigne and Politano out
4:26 PMa month ago

24' Politano crosses from the right, Stryger Larsen deflects and Rrahmani heads, goalkeeper slaps it away
4:26 PMa month ago

23' Insigne makes a deep pass to Osimhen in the back of the defense, he shoots a cross, Silvestri makes a sighting shot and the ball grazes the crossbar
4:14 PMa month ago

19' Jean-Victor Makengo and Beto in place of Pereyra and Deulofeu
4:10 PMa month ago

18' Samir commits a lateral foul on the right, Politano raises in the area, Anguissa heads free, undisturbed, and the goalkeeper deflects for a corner
4:08 PMa month ago

16' Pereyra brings down Osimhen on the edge of the box. Insigne hits the ball straight at Silvestri's left.
4:04 PMa month ago

13' Mario Rui gets the ball and shoots with his left foot, placed, but the ball explodes on Pussetto's head
4:02 PMa month ago

11' Samir, Udinese defender, for bringing down Politano on the edge of the box. A dangerous free-kick is awarded to Napoli.
4:00 PMa month ago

8' KOULIBALY! In another well worked move in the Neapolitan attack, Politano takes a short corner with Insigne, receives it back and crosses to Fabian Ruiz on the left, he adjusts it back and the defender shoots hard with his right foot and hits Silvestri's left corner.
3:55 PMa month ago

6' Anguissa opens for Mario Rui, he crosses at the second post, looking for Politano, Larsen moves away for a corner
3:54 PMa month ago

5' Di Lorenzo sets Anguissa in motion on the right wing, he goes to the back line and crosses to Osimhen, who is marked from close range and fails to win the corner. Goal kick to Silvestri.
3:52 PMa month ago

3' Napoli takes the initiative of the match, exchanging passes, but has not yet come close to Silvestri's area
3:49 PMa month ago

00' The second half begins. Udinese gets the first touch on the ball.
3:44 PMa month ago

45' Insigne passes to Politano, who is caught in an irregular position
3:37 PMa month ago

43' Molina sends the ball towards Pussetto, but it crosses the whole area and goes the other way, out the side.
3:29 PMa month ago

37' Deulofeu left-footed shot from outside the area, Ospina searches the left corner and saves without giving a rebound
3:27 PMa month ago

34' RRAHMANI! Insigne plays a free-kick to Fabian Ruiz on the edge of the box, and he sets up Koulibaly on the left. The defender crosses and the Kosovo player heads in to extend the lead.
3:27 PMa month ago

28' Zambo Anguissa makes a lift pass through the middle towards the left side of the box, defender cuts off
3:14 PMa month ago

25' OSIMHEN! Mario Rui's throw-in to Insigne on the left, Silvestri comes out of his goal and he touches it in. Just before the ball enters the goal, the number 9 pushes it into the back of the net.
3:12 PMa month ago

22' After a good arrival by Larsen, Arslan lets the ball pass, Pussetto receives it in front of the goal, but Ruiz arrives at the marking

20' Udinese tries to go down the left, Napoli closes in and then Walace risks a shot from outside the area and hits the defense
3:05 PMa month ago

17' Udinese mark the ball out, Deulofeu takes the ball from Ospina and comes back to look for the best angle, but in time to finish the goalkeeper recovers and makes the save
3:03 PMa month ago

15' Insigne receives on the edge of the area, fills his foot and sends the ball into the stands
3:00 PMa month ago

12' Mario Rui sets Insigne in motion on the left, he moves towards the penalty area, cuts to the middle and shoots into the left corner, goalkeeper stretches and slaps the ball
2:59 PMa month ago

10' Napoli value the possession of the ball in the offensive field, but cannot finish in the direction of Silvestri's goal
2:57 PMa month ago

5' Pereyra is fouled on the left side of the box, Di Lorenzo comes close, and the Argentine goes down. VAR does a silent check and referee Gianluca Manganiello orders the match to go ahead.
2:57 PMa month ago

4' Following a corner kick from the left, Larsen crosses into the box and Pussetto finishes with a bicycle kick, but the ball goes to the right of the goal
2:57 PMa month ago

2' Samir tests goalkeeper Ospina with a left-footed shot from outside the box, but he miscues the ball and it goes wide of Ospina's right-hand post.
2:49 PMa month ago

1' Osimhen comes down the left and crosses low into the middle of the area, defense cuts off
2:47 PMa month ago

Players lined up for the National Anthem. Udinese wear their main uniform, consisting of a shirt with black and white vertical stripes, black names, white numbers, white shorts and white socks, goalkeeper Silvestri all in orange. Napoli is all sky-blue, goalkeeper Ospina is in light green.
2:30 PMa month ago

Brazilians in the field

The Udinese defense has Samir, a native of Rio de Janeiro, who was born in Flamengo and had a brief stint at Hellas Verona. Next to him will be Rodrigo Becao, from Salvador, Bahia. To complete the picture there is midfielder Walace, ex-Gremio, Olympic champion in Rio 2016. Napoli, on the other hand, has another defender with green and yellow blood - Juan Jesus, revealed at Inter. He was sold to Inter Milan and then to Roma until he arrived at Napoli this season.
2:17 PMa month ago

A thorn in one’s side

Napoli have won nine of their last 10 encounters against Udinese - in addition, there has been one draw in 2019. The last time that the black and white team left the field with the three points was on April 3, 2016. On that occasion, the Portuguese Bruno Fernandes (currently at Manchester United) scored two goals and only didn't score a hat-trick because he missed a penalty. Thereau extended the advantage and Higuain pulled one back. At the time, Luigi de Canio was in charge of the team and Maurizio Sarri was the Neapolitan coach.
2:01 PMa month ago

Hey! We're back with the latest news from Udinese and Napoli, who take the field in a few minutes in the Serie A. There is less than 1 hour until the ball starts to roll at the Dacia Arena in Udine, so I invite you to come with us and stay updated with all the details of this match that ends the Matchweek 4, with behind the scenes information, lineups and much more.
1:46 PMa month ago

Do not miss a detail of the game with the live updates and commentaries of VAVEL. Follow along with us all the details, commentaries, analysis and lineups for this
Udinese vs Napoli match.
1:41 PMa month ago

How to watch Udinese vs Napoli Live Stream on TV and online?

Where and how to watch Udinese vs Napoli live online

If you want to follow this match between Udinese and Napoli on TV, just tune in to ESPN (USA) or Sky (Mexico). You can also access the ESPN app or Star+ streaming service. You can also check all the plays in real time here on VAVEL Brazil minute by minute, with a pre-match preview 1 hour before the game starts.
1:31 PMa month ago

Napoli and Udinese meet again for the first time since May. On that occasion there was a 5-1 rout at the Diego Armando Maradona Stadium built on goals by Zielinski, Fabian Ruiz, Lozano, Di Lorenzo and Insigne. Okaka scored. 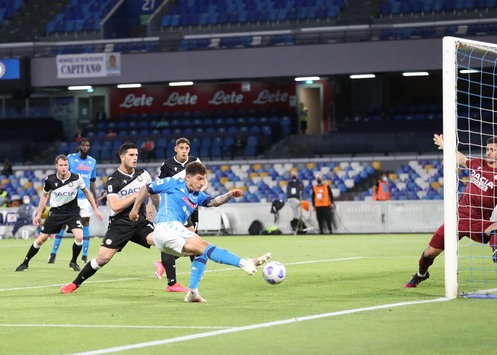 Napoli and Udinese are battling at the top of the table. The Neapolitan team closes the G4, behind Inter Milan, Milan and Roma, and if they win they will finish the round on top. The Udine club, on the other hand, is in 7th place, but a win will allow them to overtake their rivals and climb to the Top3.
12:56 PMa month ago

Udinese and Napoli have yet to lose this 2021-22 season. The bianconeri's campaign includes three wins, two in a row (Ascoli, Venezia and Spezia), and a draw (Juventus). The Albiceleste team also comes in strong - 100% record in Serie A (beat Venezia, Genoa and Juventus) and drew with Leicester away from home in their Uefa Europa League opener.
12:51 PMa month ago

Welcome to VAVEL.com’s LIVE coverage at Lega Serie A: Udinese vs Napoli

Hi everyone! Today the Matchweek 4 of Serie A matches ends and we bring you the emotions of Udinese and Napoli, who play at the Dacia Arena in Udine. My name is Bia Palumbo and I will be your host for this game. We will provide you with pre-game analysis, roster updates, and news as it happens live here on VAVEL.