I would like to thank you for the audience in this Primeira Liga match here in VAVEL!
4:00 PMa month ago

Darwin Nuñez (2) and Weigl scored for Benfica. Gustavo scored for Boavista and Benfica wins one more in the Primeira Liga!
3:49 PMa month ago

Substitution in Benfica: Lucas Veríssimo and Rafa Silva left for Morato and Pizzi.
3:43 PMa month ago

Substitution in Boavista: Pérez left and Yusupha came in.
3:42 PMa month ago

On Ntep's cross-shot, Odysseas got the ball in two strokes.
3:40 PMa month ago

In the cross coming from the right Everton managed a strong header and Bracali spilled over the goal!
3:35 PMa month ago

Yellow for Musa, for bringing down Lucas Veríssimo. And in Boavista left Pedro Malheiro and entered Luís Santos.
3:26 PMa month ago

Substitution in Benfica: out Yaremchuk and in Everton Cebolinha.
3:23 PMa month ago

A beautiful throw from Veríssimo, Rafa Silva invaded the area and played to the middle, where Darwin Nuñez was to hit the back of the goal!
3:19 PMa month ago

Lucas Veríssimo is yellow carded for stepping on Boavista's striker.
3:14 PMa month ago

Yaremchuk received a long pass, hit it hard, high up, and goalkeeper Bracalli deflected it for a corner, which was beaten and there was an attacking foul!
3:11 PMa month ago

Gustavo took a long shot and sent it over the goal this time.
3:09 PMa month ago

Musa gives the first touch on the ball and it rolls into the second half!
3:08 PMa month ago

The teams appear on the field to begin the second half of the match! At Benfica Diogo Gonçalves left and Lazaro came in. And in Boavista left Gorré for the entrance of Ntep.
2:47 PMa month ago

Despite a scare on a Gustavo shot, Benfica goes to the break beating Boavista 2-1 with goals from Darwin Nuñez and Weigl.
2:38 PMa month ago

Yellow for Nathan, for a strong foul on Rafa Silva.
2:38 PMa month ago

On the cross in the area Otamendi rose alone to head to the middle, where Weigl was to put the ball in the back of the net!

In a mistake in the defense's exit Gustavo shot hard from outside the area and sent it to the angle of Odysseas, who could do nothing to see Boavista's great goal!

Substitution in Boavista: Hamache left and Ferreira came in.

On Diogo Gonçalves' cross from the right, Darwin Nuñez managed to head the ball into the goalkeeper's left corner, opening the score!
2:09 PMa month ago

Yaremchuk received on the right and crossed to Nuñez, who hit it dangerously!
2:01 PMa month ago

Yaremchuk makes the first touch on the ball and it rolls into the first half of the match!
2:00 PMa month ago

The players appear on the field to start the match!
1:37 PMa month ago

Closing the Sunday Porto massacred Moreirense by 5-0. Today, in addition to this match, we will have Braga and Tondela.
1:37 PMa month ago

On Saturday Belenenses drew 1-1 with Gil Vicente, as well as Vizela and Paços de Ferreira - this one on Sunday. Also on Saturday, Arouca drew 2-2 with Vitória. Sporting won 1-0 against Estoril.
1:34 PMa month ago

The sixth round of the Primeira Liga started on Friday (17), when Portimonense beat Santa Clara 2-1. On Saturday, Famalicão drew 0-0 with Marítimo.
1:28 PMa month ago

The players take to the field to begin their warm-up exercises.
1:15 PMa month ago

Benfica has a line-up for the match: 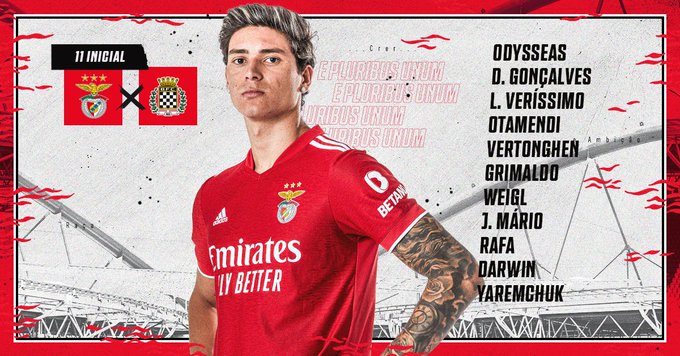 Boavista has a line-up for the match: 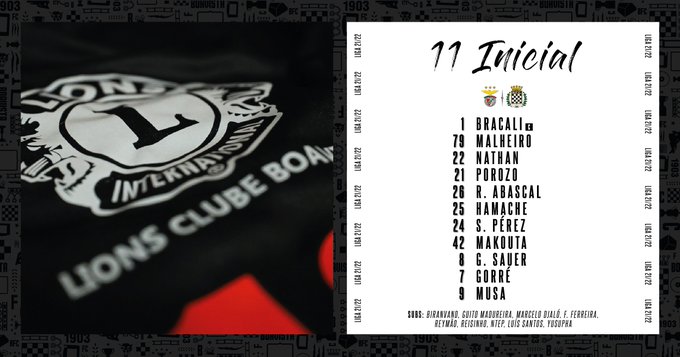 Now begins the broadcast of the Primeira Liga match between Benfica and Boavista.
1:00 PMa month ago

Do not miss a detail of the match with the live updates and commentaries of VAVEL. Follow along with us all the details, commentaries, analysis and lineups for this Benfica vs Boavista match.
12:55 PMa month ago

How to watch Benfica vs Boavista Live in TV and Stream

If you want to watch the game Team 1 vs Team2 live on TV, your options is: None.

If you want to directly stream it: Streaming services and Benfica TV International app.

If you want to watch it on internet, VAVEL US is your best option

What time is Benfica vs Boavista match for Primeira Liga?

This is the start time of the game Benfica vs Boavista of 20th of September 2021 in several countries:

The probable Boavista for the match should be: Bracalli, Nathan, Porozo and Abascal; Malheiro, Makouta, Perez and Hamache; Nije, Musa and Sauer.
12:35 PMa month ago

The probable Benfica team for the match is: Vladichodimos, Otamendi, Vertoghen and Morato; Lazaro, João Mario, Weigl and Grimaldo; Pizzi, Seferovic and Nuñez.
12:30 PMa month ago

The only absence between the two teams is Vukotic, for Boavista. Meanwhile in Benfica Everton Vebolinha may be out for the entry of Lazaro.
12:25 PMa month ago

Unbeaten and with a 100% record, Benfica leads the Primeira Liga with 15 points from five games, followed closely by Sporting and Porto, both with 14. Boavista has eight points, in eighth place, tied with Gil Vicente, Paços de Ferreira, and Braga.
12:20 PMa month ago

Benfica arrives for the match after drawing 0-0 with Dynamo, away from home, for the Champions League. Already on Saturday (11), against Santa Clara, away from home also, came a 5-0 thrashing, with goals from Rodrigo Pinho, Darwin Nuñez (2), Rafa Silva and Yaremchuk.