We hope you enjoyed the Monaco vs Saint Etienne matchday seven of the French League. Keep checking back on VAVEL.COM for updates throughout the day.
3:04 PMa month ago

Match ends at the Stade Louis II in Monaco, France. The Red and Whites took the three points and continue to climb up the overall standings.

The first half started very lively for both teams, there were arrivals from both sides but the balls crashed against the crossbar and the ball did not cross the goal line, however, the expulsion would change the rhythm of the match and Monaco would open the scoreboard but Saint Etienne would not take long to tie the game.

In the second half, the home side went all out on the attack and, thanks to Wissam Ben Yedder, they took the win at home to end the match with a 3-1 scoreline.

Last ten minutes of the match, Monaco are close to victory while Saint Etienne are looking for a draw.
2:34 PMa month ago

GOOOOOOOOOOOOOOOOOL FOR MONACO! WISSAM BEN YEDDER SCORES FROM THE PENALTY SPOT TO PUT THE HOME SIDE ON TOP!
2:20 PMa month ago

Substitution at Monaco! Sibidé comes off and Ruben Aguilar comes on.
2:07 PMa month ago

The first half is over

At the end of the first half at the Stade Louis II, Monaco and Saint Etienne share the points for the moment.
1:42 PMa month ago

Substitution! Nordin and Nande are out, Youssuf and Bajic (GP) are in.
1:35 PMa month ago

TO THE SHOWERS! Etienne leaves his team with one less on the field, serious mistake by the goalkeeper. They are losing and it leaves them at a disadvantage!
1:29 PMa month ago

Hard foul on Turkey's Whabi Khari, the match is stopped for a few moments for his attention.
1:17 PMa month ago

With a quarter of the game gone, the visitors have gained control of the ball but are unable to finish their moves correctly.
1:13 PMa month ago

Saint Etienne missed the chance!  Krasso was on his way to goal but a good defensive cover prevented them from doing any damage to the home side.
1:10 PMa month ago

Volland has a shot on goal but it goes wide.
1:06 PMa month ago

The match kicks off at the Stade Louis II, Monaco are still looking to continue their quest for points while the visitors are looking to get off the bottom of the standings.
12:50 PMa month ago

In a couple of minutes we will start with the match: Monaco vs Saint Etienne corresponding to day 7 of Ligue 1.
12:43 PMa month ago

What elegance in France!

This is how the AS Monaco players arrived at the Stade Louis II. 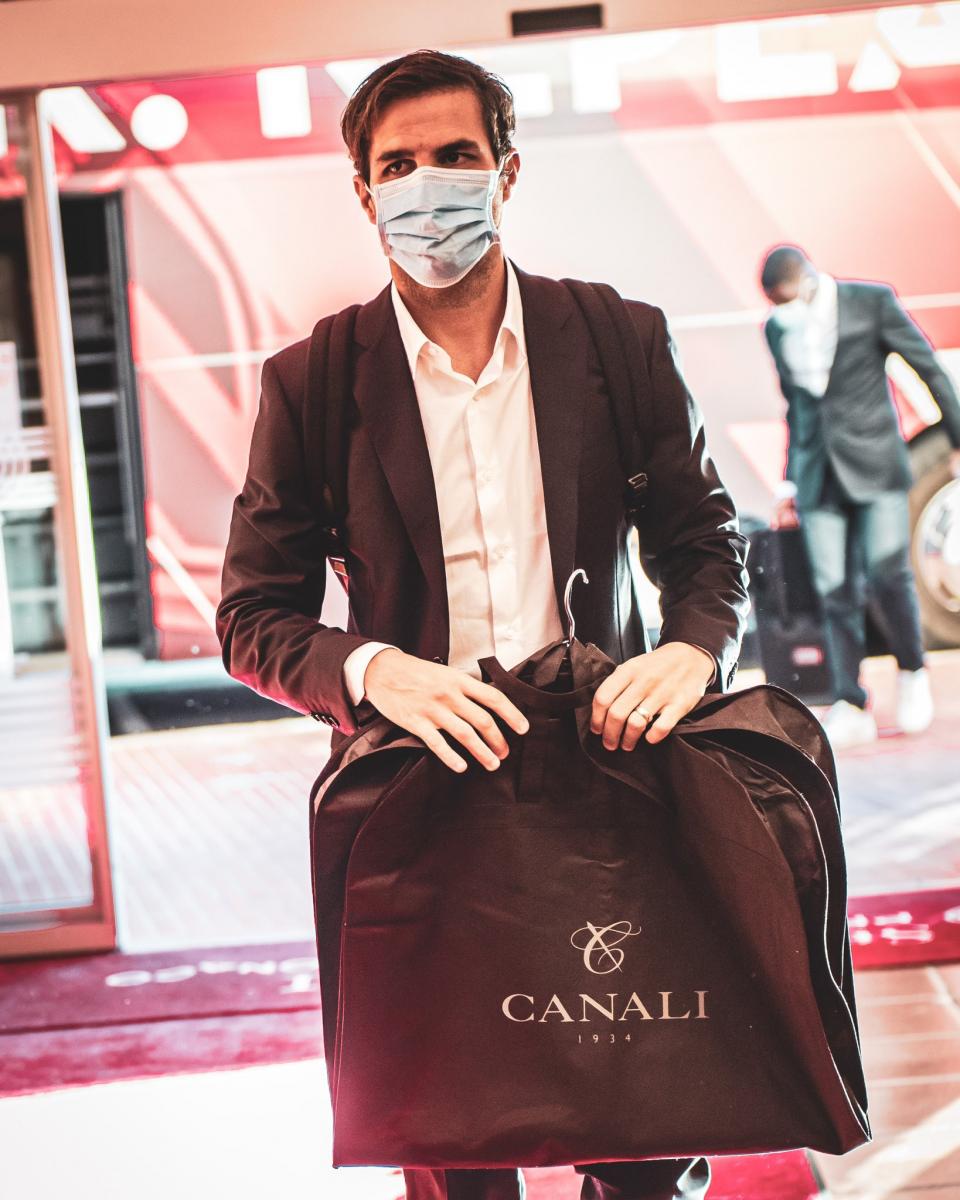 This is how Monaco will start their match against Saint Etienne. 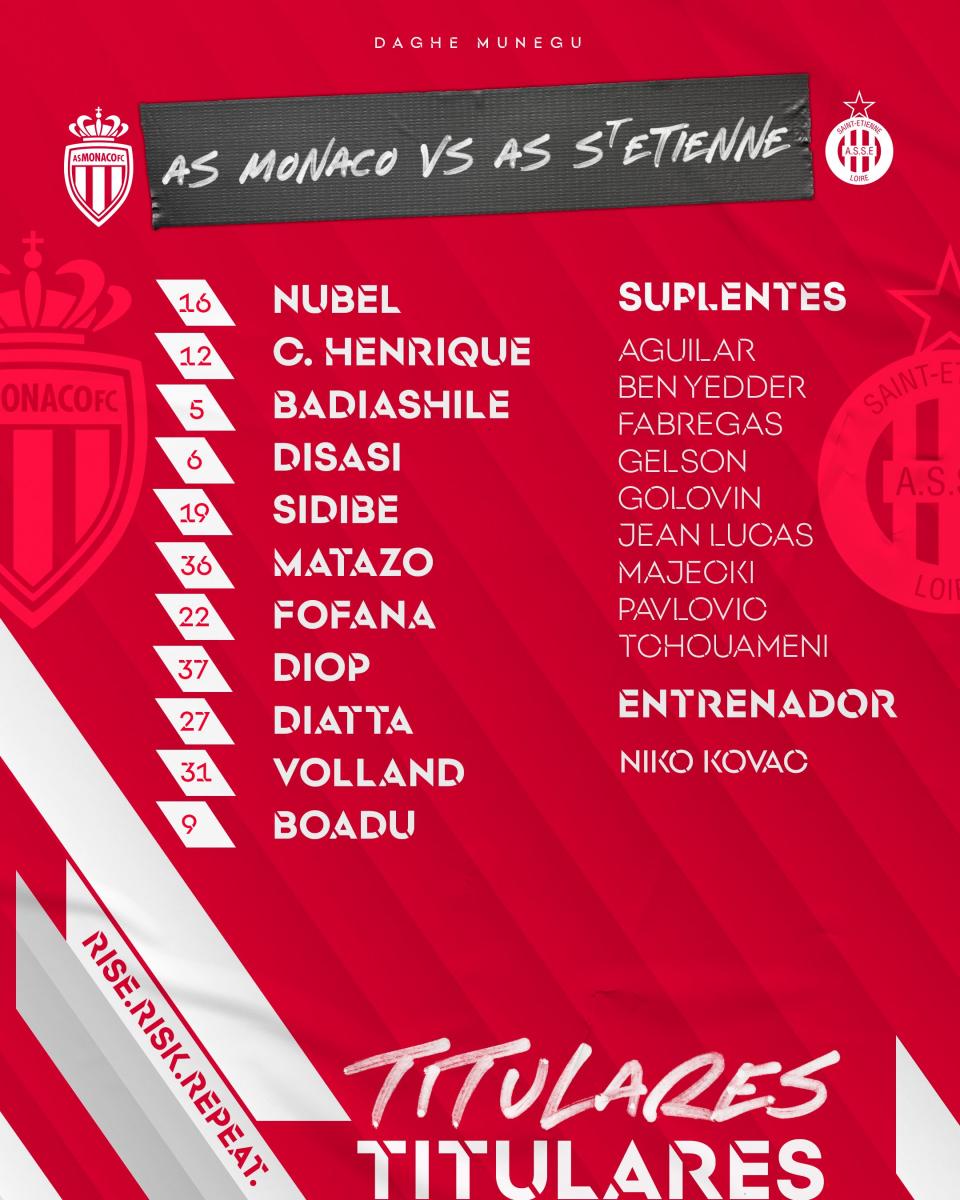 At the moment, AS Monaco and AS Saint Etienne have a difference of two points in the standings. AS Monaco comes into the match with five points in their locker and occupying fourteenth place before the match. As for the away team, AS Saint Etienne, they sit in nineteenth place with three points - a win could separate them or bring them closer together than they already are!
12:19 PMa month ago

Previously, there have been other meetings at AS Monaco's home ground and the results are six defeats and eight draws in favor of the home team. Moreover, the visitors have not lost in their last three visits to the Monaco stadium. The last time Monaco and Saint Etienne met in the competition was in March 2021 and the match ended with a score of 0-4 for the home side.
12:13 PMa month ago

The dressing rooms are now ready to welcome the home team, today Monaco is looking to achieve the feat.

How does Saint Etienne arrive?

As for the away team, AS Saint Etienne were beaten 2-1 in their last match against FC Girondins Bordeaux, so a win against AS Monaco would help them improve their record in the competition. So far, of the team's six matches in Ligue 1, they have won zero of them with a tally of six goals scored and 11 conceded.
12:07 PMa month ago

How is Monaco coming along?

AS Monaco enter the seventh matchday of the competition looking to improve their position after a 2-2 draw against OGC Nice in their last game. Since the start of the competition, the home side have won just one of their six matches to date and have conceded nine goals against five.
12:02 PMa month ago

No need to wait any longer, soccer action resumes with Monaco vs Saint Etienne in France, both teams are looking for three points in the championship and climb positions in the overall standings. One more in need than the other, but defeat or victory could change the reality of one of these two teams.
8:34 PMa month ago

Do not miss a detail of the match with the live updates and commentaries of VAVEL. Follow along with us all the details, commentaries, analysis and lineups for this Monaco vs Saint Etienne match.
8:29 PMa month ago

What time is Monaco vs Saint Etienne match for Ligue 1?

This is the start time of the game Monaco vs Saint Etienne of 22th September in several countries:

He is the standard bearer of the team, Whabi Khazri, the killer of the green team and one of the most beloved players of the fans will be the player to follow for this match. Since his arrival in 2018 to the Saint Etienne team, Whabi has played almost 5,649 minutes with the green jersey, he has appeared 76 times as a starter and 26 times he has broken the net, also, he has contributed with 9 assists during his stay so Whabi could be the player who tips the balance in favor of the visiting team. He is also characterized for being a temperamental player as he has received 21 yellow cards, and only 2 expulsions.

Since his arrival in 2019, Wissam Ben Yedder has become a reference and idol of the Monaco fans. The Frenchman has played around 5,087 minutes with the red and white shirt, he has appeared 68 times as a starter and on 38 occasions he has managed to break the net to score his name on the scoreboard, in addition, he has contributed with 16 assists during his stay at the club, also, he has seen at 4 different times the yellow card but has never had to leave the match.

Monaco and Saint Etienne have met a total of 106 times (36 wins for Monaco, 27 draws and 43 wins for Saint Etienne) where the scales are tipped by a slight difference in favor of the green side. Likewise, it is the away team who have the advantage in goals scored as the scales are tipped in their favor with 144 goals while the home team has 127 in their favor. Their last meeting dates back to matchday 30 of the 2020-21 season, when the red-and-white team defeated the Greens by a score of 4-0. 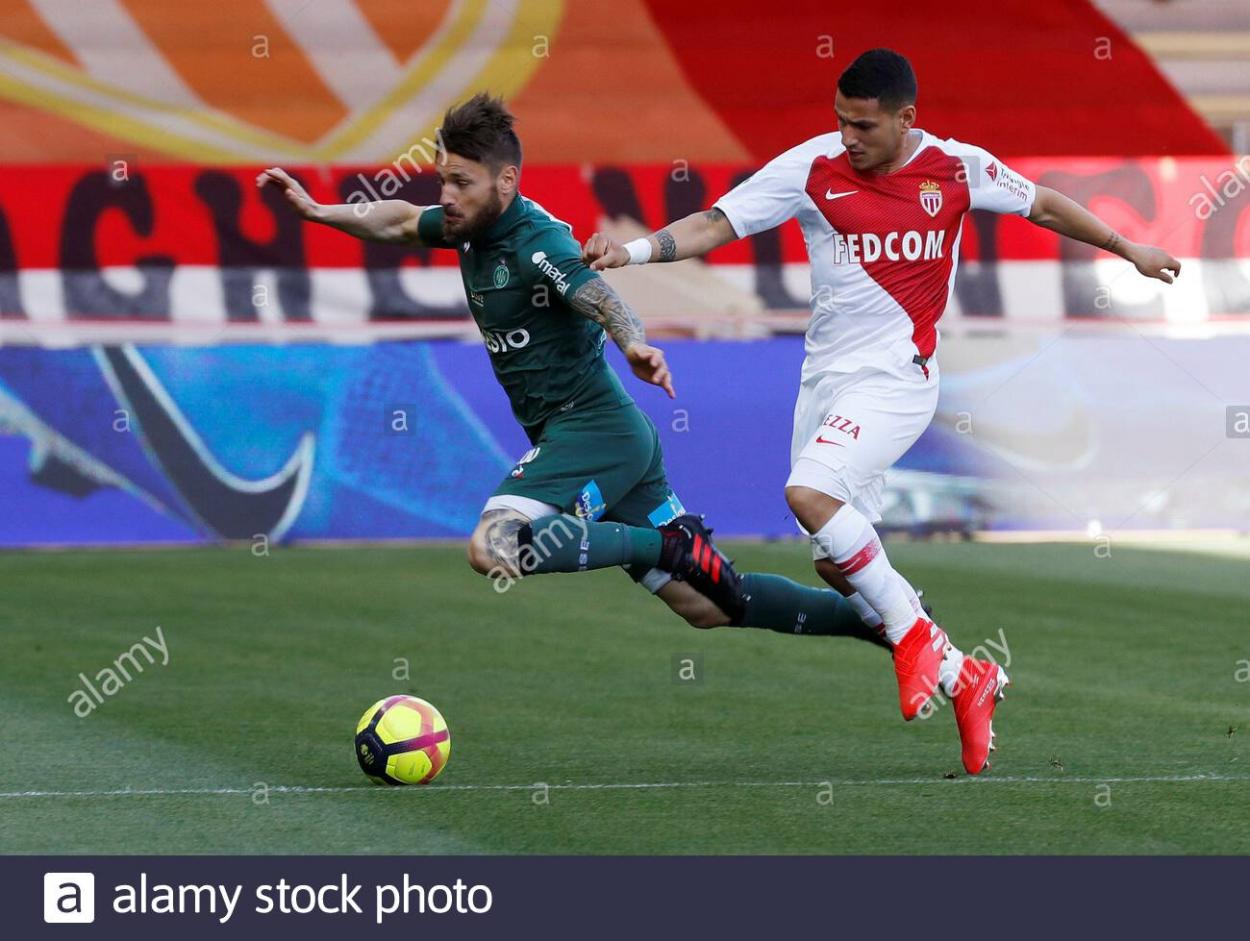 For this match, Jerome Brisard will be the center referee, accompanied by Alexis Auger and Benjamin Pages as assistants 1 and 2 respectively, and Christophe Laquerriere will be the fourth official. In the VAR, referees Clement Turpin and Claude Tenelle will be in charge of monitoring any questionable play inside the area or that merits a red card.
7:54 PMa month ago

In need of three points

For their part, Saint Etienne are at the bottom of the overall table, being the penultimate team in the competition with 3 points. However, despite not occupying one of the places at the top or mid-table, they may cause a surprise at home because despite having lost last matchday, the factor of not wanting to be relegated from the maximum circuit could favor them and make them play their best soccer for this match and be able to take home three golden points.
7:49 PMa month ago

The mission is to continue adding

The Red and Whites have been characterized for being a mid-table team in the French football tournament, they have a modest squad but enough to stay in the top circuit of the country. Currently, the team coached by Niko Kovac is in the thirteenth place with 5 points, however, it is of vital importance to start getting three points from three because the difference is not much with the teams that are at the bottom and a defeat in this matchday could put them to think about not being relegated.
7:44 PMa month ago

They have to start winning now

The seventh matchday of Ligue 1 will bring us a clash of similar realities when Monaco welcomes Saint Etinne at the Stade Louis II. On the one hand, the locals are in thirteenth place in the overall table with 5 points that have been the result of 1 win, 2 draws and 3 defeats so far this season. On the other side, the Saint Etinne team is in 19th place with 3 points so far this season and contrary to their rival, they have 3 defeats and 3 draws so they are in need of a victory this matchday.
7:39 PMa month ago

The Monaco vs Saint Etinne match will be played at Luis II Stadium, in France, Monaco. The kick-off is scheduled at 1:00 pm ET.
7:34 PMa month ago

Welcome to VAVEL.com’s LIVE coverage of the 2021 Ligue 1: Monaco vs Saint Etinne!