Thank you here for listening to another LaLiga match here on VAVEL. Have a good night and see you next time!
5:54 PMa month ago

With a convincing victory, Real Madrid beats Mallorca at home and takes another three points in LaLiga!
5:49 PMa month ago

Jovic tried a volley and sent it into the hands of Reina, who kept it!
5:45 PMa month ago

Isco now had the chance, he received a pass from Vinícius Júnior, who was released by Alaba, to hit the middle of the area and send it into the back of the net with no problem!
5:40 PMa month ago

Benzema received a long pass in the area, controlled it with his back and hit, with two deflections, to beat Reina and make another one! And a double substitution in Real: Benzema and Nacho left to Jovic and Sergio Santos.
5:35 PMa month ago

Substitution in Mallorca: Lago Junior left and Mboula came in.
5:33 PMa month ago

Yellow for Nacho, for a foul on Lago Júnior. The foul was hit backwards, where Lago Júnior hit it hard and sent it through the right side of the goal!
5:22 PMa month ago

Double substitution in Mallorca: Gayá, Febas and Hopppe left for Abdon, Sánchez and Jaume. And in Real Madrid Camavinga left to enter Blanco.
5:17 PMa month ago

Yellow for Baba, for a foul on Rodrygo on the right.
5:16 PMa month ago

NOW YES! Asensio receives the ball from Benzema on the edge of the box. He charged in and hit it hard and sent it into Reina's right corner, making it a goal!
5:11 PMa month ago

Benzema received in the middle of the small area, after a cross from Rodrygo, putting the ball in the net, but the goal was disallowed for a foul on Benzema before the shot was taken.
5:06 PMa month ago

Hoppe makes the first touch on the ball and it rolls into the second half of the match!
5:06 PMa month ago

The teams return to the field to start the second half. In Mallorca Kubo left and Baba came in.

Asensio shone in the first half of the match, with two goals, with Benzema opening the scoring and Lee Kang-In decreasing!
4:48 PMa month ago

Vinícius Júnior received inside the area and hit hard, but goalkeeper Reina saved the ball, saving Mallorca.
4:38 PMa month ago

Rodrygo got a cross, Benzema headed it into the middle and Asensio, in the small area, was stopped in his shot, not getting the hattrick!
4:32 PMa month ago

Ansensio, on the right, received a great pass from Benzema, to hit a cross and beat goalkeeper Reina!
4:28 PMa month ago

And on the way out Lee Kang In received the ball on the half moon and hit it hard to the right corner of Courtois, who could do nothing!
4:28 PMa month ago

Now in a move to the left by Vinícius, the ball was finished off by Rodrygo, who deflected it to the defense, with goalkeeper Reina sprawling and Asensio sending it into the back of the net!

Lago Junior received the ball in the middle and hit it high, but it went out.
4:21 PMa month ago

Benzema, from the edge of the box, hit a hard shot and sent it through Reina's right side.
4:06 PMa month ago

On the error of Gayá's exit, who slipped while dominating, Benzema got it, invaded the area and hit a cross to beat Reina and open the score!
4:03 PMa month ago

Benzema makes the first touch on the ball and it's off to the start of the first half!
4:00 PMa month ago

The teams appear on the pitch of the Santiago Bernabéu to start the match!

Tomorrow the round continues with Granada-Real Sociedad. In the evening, Osasuna will host Betis and Barcelona will visit Cadiz.
3:38 PMa month ago

The sixth round of La Liga started yesterday, with Atleti beating Getafe 2-1, the same result as Rayo Vallecano over Athletic Bilbao.
3:27 PMa month ago

The players take to the Bernabéu pitch to start warming up
3:14 PMa month ago

The Mallorca is lined up and comes to the match with: 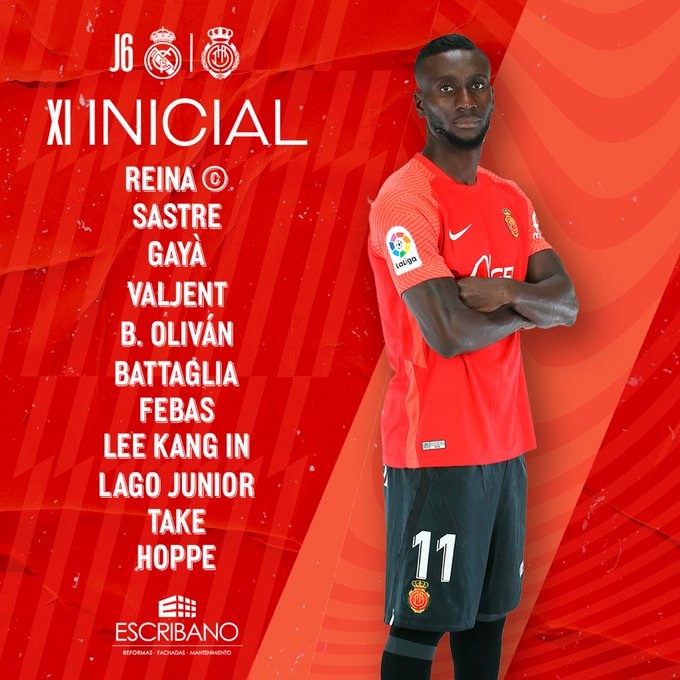 The Real Madrid is lined up and comes to the match with: 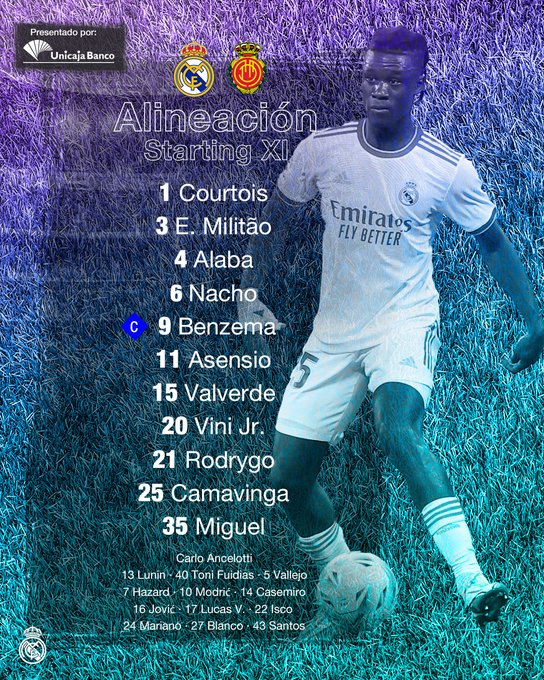 Now the broadcast of the La Liga match between Real Madrid and Mallorca begins!

Do not miss a detail of the match with the live updates and commentaries of VAVEL. Follow along with us all the details, commentaries, analysis and lineups for this Real Madrid vs Mallorca match.
2:54 PMa month ago

If you want to watch the game Team 1 vs Team2 live on TV, your options is: none.

What time is Real Madrid vs Mallorca match for LaLiga?

This is the start time of the game Real Madrid vs Mallorca of 22th September 2021 in several countries:

Javier Alberola Rojas will referee the match, with César Soto Grado and José Luiz González González in the flags.
2:39 PMa month ago

The possible Mallorca team for the clash is: Reina, Maffeo, Valjent, Olivan and Costa; Kubo, Sevilla, Baba and Lee; Nino and Rodriguez.
2:34 PMa month ago 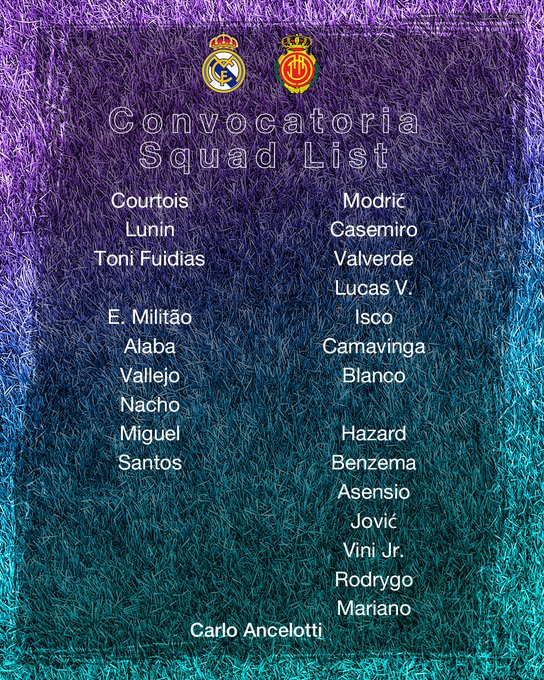 Real Madrid will be unable to use Kroos, Bale, Ceballos and Marcelo, all injured, as well as Mendy, who is a doubt for the match. Meanwhile Mallorca will only have Sanchez out, but still have Raillo, Russo and Sedlar as doubts for the match.
2:24 PMa month ago

Real Madrid are second in the competition with 13 points, one behind leader Atlético de Madrid and three ahead of Valencia, Rayo Valencano and Real Sociedad, all with 10 points. Mallorca is in 10th position with eight points, tied with Sevilla, Barcelona and Osasuna, all positions above.
2:19 PMa month ago

Mallorca comes from a loss and a draw in their last two matches, both in La Liga. Against Villarreal, on Sunday, came the draw, without goals, away from home. The defeat was also away from home, to Athletic Bilbao, by 2-0, on Saturday. Dani Vivian and Iñaki Williams scored the goals of the match.
2:14 PMa month ago

Real Madrid has won two of its last two matches. Last Sunday (19), away from home, against Valencia, came the first, by 2-1, with a comeback. Hugo Duro opened the scoring, but Vinícius Júnior and Benzema scored for Real, turning the match. And on Wednesday (15), against Internazionale, away from home, in the Champions League, Real won 1-0, with a goal by Rodrygo.
2:09 PMa month ago

My name is Victor Cunha and I’ll be your host for this game. We will provide you with pre-game analysis, roster updates, and news as it happens live here on VAVEL