Thank you for following the Liga MX game between Tigres and Pumas.
9:59 PM21 days ago

In spite of the chances that both teams had, Tigres and Pumas split points at the Universitario Stadium.
9:57 PM21 days ago

For kicking the ball, Javier Aquino is cautioned.
9:53 PM21 days ago

Dueñas' powerful shot hits the net from the outside.
9:44 PM21 days ago

Gignac tries to get forward, but his shot is just wide of the goalkeeper's hands.
9:44 PM21 days ago

Gonzalez managed to shoot an untimed shot, where the Paraguayan was left lying on the field of play.
9:42 PM21 days ago

Freire knocks down Gonzalez and the Pumas defender is cautioned.
9:33 PM21 days ago

Dinenno's shot was saved by Nahuel's hand to avoid the fall of his frame.
9:30 PM21 days ago

Goal previously disallowed to Gonzalez for a shot by Gignac that was in an advanced position.
9:30 PM21 days ago

Vigón's header directly into the hands of Alfredo Talavera. Tigres came close and continued to insist.
9:27 PM21 days ago

Lopez and Corozo come out

Saucedo's delayed diagonal shot by Carioca hit the base of the post.
9:16 PM21 days ago

Gonzalez anticipates at the near post, but his shot sails just wide of the goal.
9:15 PM21 days ago

Corozo pumps the ball in front of Nahuel Guzmán, but the ball hits the top of the net.
9:06 PM21 days ago

The second half begins between Tigres and Pumas UNAM.
8:51 PM21 days ago

Quiñones' double shot was blocked by Talavera, but he had already been penalized for offside.
8:48 PM21 days ago

Pizarro's long service to Gignac wasted an important one.
8:44 PM22 days ago

Tigres goal disallowed because Quiñones was offside.
8:39 PM22 days ago

Aquino tries to make a one-two with Quiñones, but the South American misses the ball and the dangerous play is lost.
8:29 PM22 days ago

Fulgencio's shot from outside the area goes over the goal.
8:28 PM22 days ago

Pumas continued to dominate the game, but despite the number of chances, they were unable to get on the scoreboard.
8:21 PM22 days ago

Thauvin left due to injury and Fulgencio came on as a forced substitution for Tigres.
8:20 PM22 days ago

Dinenno's shot inside the box goes over the goal. Pumas close.
8:18 PM22 days ago

Melitao's shot hit the outside of the net where Nahuel deflected the ball, but the referee did not sanction anything.
8:14 PM22 days ago

Corozo's shot at the near post is saved by Nahuel Guzmán.
8:12 PM22 days ago

Salcedo is fouled in midfield and is cautioned.
8:09 PM22 days ago

Melitao anticipates, but his header goes over the top of the goal.
8:08 PM22 days ago

Gignac's header from a corner kick hits the base of the post and miraculously misses the goal.
8:05 PM22 days ago

Guzman concedes a rebound after Dinenno's shot, but Rogério flies it in on the rebound.
8:03 PM22 days ago

The game between Tigres and Pumas kicks off.
8:00 PM22 days ago

Under Liga MX protocol, Tigres and Pumas make their appearance on the field at the Volcán.
7:54 PM22 days ago

We are minutes away from the start of the match between Tigres and Pumas for Date 10 of Liga MX. Stay tuned for all the details as they happen at the Volcán.
7:46 PM22 days ago

Both Tigres and Pumas finish their warm-up for Date 10 of the Liga MX.

The Pumas have arrived

After losing last week's victory against Mazatlan, the Pumas will try to get their first away win to climb out of the bottom of the standings.

Due to a last-minute appendicitis, Uruguayan Nicolás López underwent successful surgery and will therefore miss tonight's game.
7:26 PM22 days ago

The U has arrived

This is how the universitarios regiomontanos arrived at the Volcán in their quest to forget the loss in the Clasico Regio.

Between absences, injuries and poor play, Frenchman André-Pierre Gignac has gone five months without scoring, but he will be facing one of his favorite clients because he has scored against Pumas UNAM on 13 occasions, including in a Liga MX final.
7:06 PM22 days ago

Tigres and Pumas face off at the Volcán in one of the most attractive games of the day in an attractive clash and in search of another win. We begin with coverage of the game.
7:01 PM22 days ago

Do not miss a detail of the match with the live updates and commentaries of VAVEL. Follow along with us all the details, commentaries, analysis and lineups for this Tigres vs Pumas match in Liga MX.
6:56 PM22 days ago

What time is Tigres vs Pumas match for Liga MX?

This is the start time of the game Tigres vs Pumas of 25th September in several countries:

The regiomontanos have a clear dominance in the last five games on any field with a balance of three wins and two draws, in addition to not losing since 2018.

Argentine Juan Dinenno regained his confidence after scoring against Mazatlán in the last game and, with Gabriel Torres' departure due to poor performance, he will have to improve a lot to be the goal scorer that Pumas has needed so much in recent months. 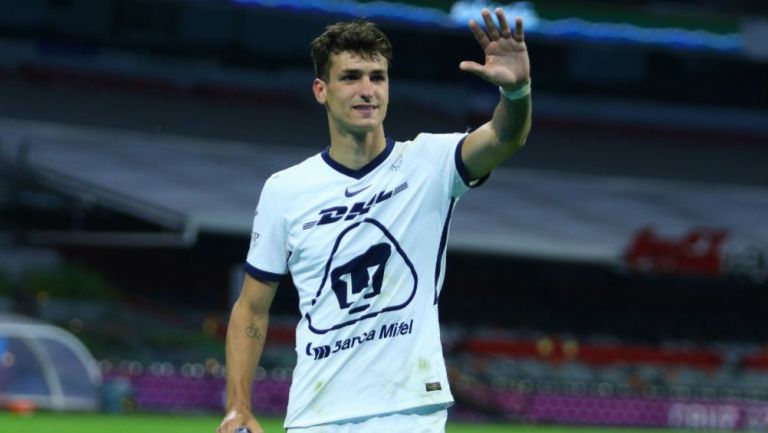 Since his arrival from the Olympic Games and in addition to his injury, Frenchman André-Pierre Gignac has not been able to score, although he will be facing one of his favorite clients where he could break the bad streak.
6:36 PM22 days ago

Farewell to the Panamanian

One of the first important decisions made by Miguel Mejía Barón to the Pumas board of directors was the definitive departure of the Panamanian Gabriel Torres, who only scored one goal in 20 games and whose level left much to be desired throughout his stay.
6:21 PM22 days ago

Pumas: out of the crisis

UNAM Pumas have been in a footballing and administrative rut and it seems difficult for them to even reach the play-offs. Last week they had everything they needed to win against Mazatlan but let the three points slip away in a 2-2 draw in the final stretch.
6:16 PM22 days ago

Miguel Herrera's first test at the helm of the UANL Tigres could not be overcome when they lost 2-0 to Monterrey in the Clasico Regiomontano; however, they return home and it seems that they have a suitable opponent to get back to winning ways and recover points in order to climb up the standings.
6:11 PM22 days ago

The Tigres vs Pumas match will be played at the Universitario Stadium, in Nuevo Leon, Mexico. The kick-off is scheduled at 8 pm ET.
6:06 PM22 days ago

Welcome to VAVEL.com’s LIVE coverage of the 2021 Liga MX: Tigres vs Pumas!