Thank you for your attention during the broadcast of Ajax vs FC Groningen. To keep up to date with the Eredivisie 2021-22, stay tuned to VAVEL.com.
2:41 PMa month ago

END OF THE GAME ✅

Victory for Ajax to increase their unbeaten run to seven games in a row. Groningen held on as long as they could
2:37 PMa month ago

DARAMY SHOOTS IN FRONT OF THE GRONINGEN GOAL AND THE KEEPER SAVES WITH HIS LEG
2:35 PMa month ago

Daramy had a chance to score the fourth, but did not find the right profile to finish it off
2:33 PMa month ago

Groningen's corner kick, but the ball is cut out by the Ajax defense.
2:30 PMa month ago

Groningen are totally on their home turf, Ajax are far superior
2:25 PMa month ago

Out: Steven Berghuis and Ryan Gravenberch

In: Mohammed Kudus and Davy Klaassen

Dušan Tadić shoots, goalkeeper Peter Leeuwenburgh saves, the rebound falls to Mazraoui and he misses incredibly with the goal at his disposal. Ajax miss out
2:20 PMa month ago

Mohamed Daramy spikes twice, plays to Dušan Tadić, he finds Daramy again who falls in the Groningen box and the referee tells him to get up. There is nothing
2:14 PMa month ago

Neres advances down the right, delivers a cross and the ball is held by Groningen goalkeeper Peter Leeuwenburgh.
2:13 PMa month ago

Out: Sébastien Haller and Antony

In: Mohamed Daramy and David Neres

TADIC HAS THE GOAL IN FRONT OF GRONINGEN'S GOAL, SHOOTS AND MISSES. IT WAS AJAX'S THIRD
2:08 PMa month ago

ANTONY TRANSPORTS FOR AJAX, HOOKS INSIDE, SHOOTS LEFT-FOOTED AND SCORES A GREAT GOAL FOR THE HOME TEAM.
2:03 PMa month ago

Antony plays with all his teammates in the Ajax attack, lifts a ball and Haller can't finish it off
1:57 PMa month ago

Steven Berghuis attempted a scissor kick inside the Groningen box and misses.
1:54 PMa month ago

TADIC SENDS IN A CROSS FROM THE LEFT, SÉBASTIEN HALLER HEADS THE BALL IN FRONT OF THE GOAL AND IT GOES WIDE. IT WAS AJAX'S SECOND
1:52 PMa month ago

Groningen moves the ball and the second half is underway in Amsterdam.
1:35 PMa month ago

Ajax goes into halftime with victory in the bag
1:32 PMa month ago

ANTONY SENDS IN A CROSS FROM THE RIGHT, HALLER HEADS THE BALL BUT IT DOESN'T GO IN. AJAX CONTINUES TO LOOK FOR GOALS
1:30 PMa month ago

FC Groningen picks up the lines and now plays a five-man defense.
1:27 PMa month ago

AJAX'S CROSS FROM THE RIGHT, EDSON ÁLVAREZ HEADS IN AND THE MEXICAN SCORES THE FIRST GOAL OF THE MATCH.
1:24 PMa month ago

TADIC THROWS A KILLER PASS TO HALLER AND THE NUMBER 22 FAILS TO CONNECT. AJAX CONTINUES TO FORGIVE
1:23 PMa month ago

BLIND BLIND SHOOTS FROM THE OUTSIDE FOR AJAX, GRONINGEN'S GOALKEEPER SAVES, TADIC CATCHES THE REBOUND WITH HIS HEAD AND MISSES IT. YOU CAN'T BELIEVE IT
1:19 PMa month ago

Dušan Tadić takes an indirect free kick in the box, it hits a Groningen opponent and all Ajax players call for a handball and a penalty. The referee does not budge
1:15 PMa month ago

Lisandro Martinez is left in front of the Groningen goal, has a chance but fails to connect in the best way. The score remains scoreless
1:10 PMa month ago

Sébastien Haller shoots and the ball hits an opponent as Ajax's subjugation of Groningen continues.
1:05 PMa month ago

Ngonge carries down the right for Groningen, he goes to shoot and Blind comes to the rescue. Great cut from the Ajax player
1:03 PMa month ago

Ajax's cross from the left, Antony heads the ball over the bar.
1:00 PMa month ago

Ajax advances, Antony plays to Noussair Mazraoui who advances, enters the box and drops back. The referee doesn't buy the action and the home team misses a clear opportunity.
12:57 PMa month ago

Groningen does not hide and looks to advance down the flanks. Ajax has yet to score a goal
12:55 PMa month ago

Damil Dankerlui catches a rebound in the home area, shoots and misses. Groningen had the first of the match
12:52 PMa month ago

Ajax plays a 4-2-3-1 formation and occupies all the spaces on the pitch both in defense and attack. Groningen opts for balance in midfield with a 3-4-3 formation.
12:49 PMa month ago

Ajax tries a pass into space, but Groningen defends well. Possession of the ball belongs to the home side
12:48 PMa month ago

The ball is moving and Ajax vs FC Groningen for the seventh date of the Eredivisie 2021-22 is already played
12:33 PMa month ago

The last Eredivisie match between Ajax vs FC Groningen took place on March 7, 2021. On that occasion, the Amsterdam team won 3-1.
12:27 PMa month ago 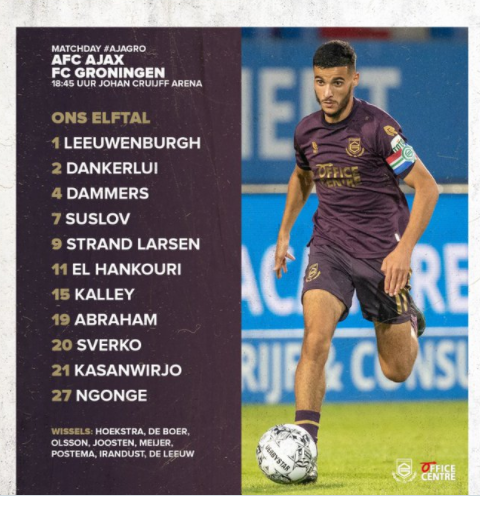 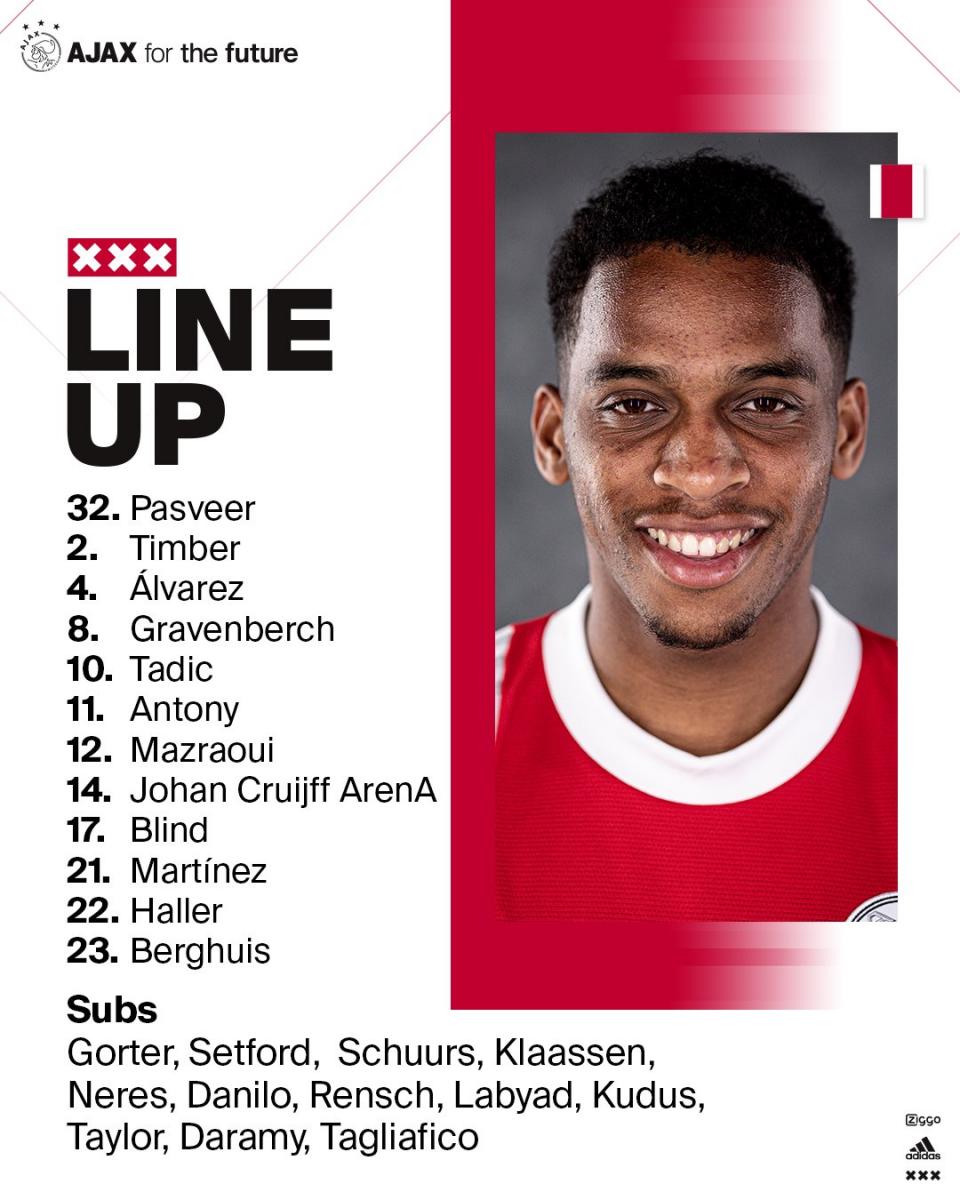 In less than an hour the match between Ajax vs FC Groningen valid for the 7th date of Eredivisie 2021-22 will start.
1:32 AMa month ago

Everything is ready to enjoy the Eredivisie match. Do not miss a detail of the match Ajax vs FC Groningen live updates and commentaries of VAVEL.com
1:27 AMa month ago

How to watch Ajax vs FC Groningen Live Stream on TV and Online?

If you want to watch the game Ajax vs FC Groningen live on TV, your options is: ESPN+.

What time is Ajax vs FC Groningen for Eredivisie?

Jörgen Strand Larsen is FC Groningen's center forward. At only 21 years of age, he represents the finishing in the team's attack. This Norwegian is one of the great promises of the Eredivisie and hopes to deliver a great performance against Ajax. 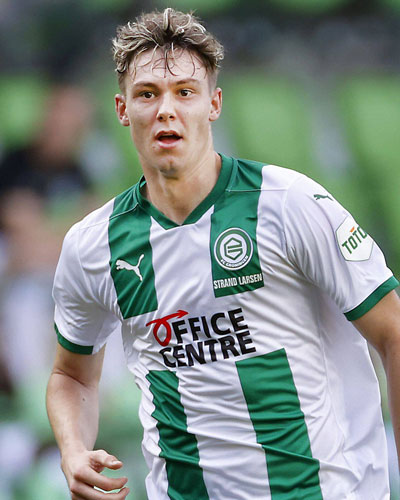 Dušan Tadić is Ajax's captain and number 10. Thanks to his experience and great ability to team up in attack, the Serbian-born left winger is one of the great figures of the Ajax and will undoubtedly be the key to solve the most complicated matches.

FC Groningen's reality is nothing like that of their opponents. The green-and-white team is struggling to stay away from the relegation zone, as they are currently in 14th place out of 18 participating clubs. They have not won in five matches.
12:57 AMa month ago

The home team from the city of Amsterdam comes into this match with a record of five wins and one draw, and has yet to lose so far in the 2021-22 season in the Netherlands. Ajax is the best performing team in the Eredivisie, in addition to being the league's sole leader, it is the top-scoring team with 27 goals and has conceded only one goal.
12:52 AMa month ago

The match will be played at the Johan Cruyff Arena

Inaugurated in 1996, the Johan Cruyff Arena has a maximum capacity of 54,990 spectators. The sports arena has been the venue for various competitive events and has also hosted world-class musical artists.
12:47 AMa month ago

Welcome to VAVEL.com’s coverage of the 2021-22 Eredivise match, Ajax vs FC GroningenLive Updates!