Continue visiting the portal so you don't miss any detail of the most relevant national and international sport.
12:37 AM20 days ago

In Kansas, the Seattle Sounders get a very important win against Sporting KC, with which they reach the top of the MLS Western Conference.
9:14 PM20 days ago

Five minutes of repositioning are added.
9:12 PM20 days ago

Not sure but @SoundersFC double their lead! pic.twitter.com/XXUEx2HniQ

After a deflection, and with the collaboration of the rival defense, captain Johnny Russell shot inside the box to shorten the lead on the scoreboard.
8:42 PM21 days ago

After a great play by Raúl Ruidíaz, Will Bruin takes advantage of a rebound in the six-yard box to increase his team's lead with a header.
8:40 PM21 days ago

Sporting Kansas City and Seattle Sounders are back in action.
8:14 PM21 days ago

Close! Raúl Ruidíaz's cross-shot with his head just misses the side of the goal.
8:06 PM21 days ago

With this score, Seattle Sounders is winning.

Turnover turned in to a goal. 👀@CristianRoldan gives @SoundersFC the lead 1-0! pic.twitter.com/wb1Evgh6Hl

On a pass from Brad Smith, inside the box, Cristian Roldán crosses with the inside of his head to put the visitors ahead.
7:53 PM21 days ago

Gradually, the Seattle Sounders have evened out possession, but have not made clear progress.
7:43 PM21 days ago

In these first minutes, Sporting KC has taken possession of the ball and has started to step on the opponent's field; however, it has yet to generate dangerous chances.
7:25 PM21 days ago

The ball is rolling in Kansas! Sporting KC and Seattle Sounders are already facing each other.
7:17 PM21 days ago

The local squad will be defending and looking to maintain their division lead.

Historically, in MLS, these institutions have met 19 times; so far, the record is five draws and seven wins per side.
6:37 PM21 days ago

In just under an hour, Sporting KC and Seattle Sounders will face each other in their quest to take the top spot in Major League Soccer's Western Conference; both teams are already settled in the stadium.
4:17 AM21 days ago

In a few moments we will share with you the starting lineups Sporting Kansas City vs Seattle Sounders live, as well as the latest information from Children's Mercy Park. Stay tuned for up-to-the-minute live coverage of the match on VAVEL.
4:12 AM21 days ago

How to watch Sporting Kansas City vs Seattle Sounders Live Stream on TV and Online?

If you want to watch the game Sporting KC vs Seattle Sounders live on TV, your options is: FOX Sports.

If you want to directly stream it: FOX Sports 1 App.

How do the Seattle Sounders get on top?

On the other hand, the previous Saturday, in their visit to Rio Tinto Stadium, they lost by the minimum difference (1-0) against Real Salt Lake.
3:52 AM21 days ago

How are Sporting Kansas City coming into the game?

The Wednesday before last, they took advantage of their home advantage to defeat Minnesota United 4-0, with Khiry Shelton, Daneil Salloi, Johnny Russell and Cameron Duke scoring the goals.
3:47 AM21 days ago

Seattle Sounders to regain the lead

The team coached by Brian Schmetzer has had a great performance so far this season, so much so that it is in second place with 45 points, after accumulating thirteen wins, six draws and five losses; it has scored 36 goals and conceded 20, and is the best defense in the division.
3:42 AM21 days ago

Sporting KC, to stay in the lead

The team coached by Peter Vermes has had a great tournament, proof of which is that it is currently in first place with 46 points, the result of thirteen wins, seven draws and five defeats; it has scored 43 goals and conceded 26. It is the best offense in its sector.
3:37 AM21 days ago

Wizards and Rave Green are competing for the top spot

Undoubtedly, this Sunday afternoon at the Blue Hell, Sporting KC and Seattle Sounders will be the protagonists of the -probably- most eye-catching match of this day in MLS, due to the very good work done by both clubs in the Western Conference of the competition.
3:32 AM21 days ago

Welcome to VAVEL.com’s coverage in the Week 27 of the 2021 MLS season: Sporting Kansas City vs Seattle Sounders Live Updates!

NYCFC vs Nashville SC preview: How to watch, team news, predicted lineups and ones to watch 12 days ago

FC Cincinnati vs New York Red Bulls preview: How to watch, team news, predicted lineups and ones to watch 14 days ago

Austin FC vs Real Salt Lake preview: How to watch, team news, predicted lineups and ones to watch 15 days ago 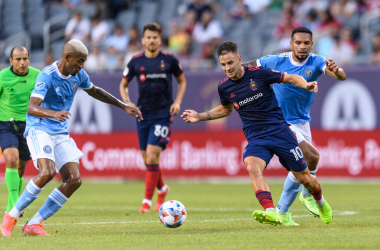 Chicago Fire vs NYCFC preview: How to watch, kick-off time, team news, predicted lineups, and ones to watch 18 days ago
//