We hope you enjoyed the Pachuca vs América matchday 11 of the Grita México Apertura 2021 tournament. Continue to visit the VAVEL website to stay up to date with all the information that comes up throughout the day.
11:04 PM2 months ago

The 90 minutes are over, América draws again with Pachuca and they split points in this closing soccer action.

In the first half, the Azulcremas were the ones who started with possession of the ball and the intention of attacking, however, despite the few opportunities generated, it was Pachuca who took the lead on the scoreboard first. Later, before the end of the first half, América would tie the score.

In the second half, things remained the same, with a little more intensity on the part of the Eagles but with few attacking chances compared to the first half.

Pachuca almost won the match! Kevin Álvarez fired a shot to Ochoa's far post, but the Mexican keeper reacted brilliantly to send it out for a corner.
10:51 PM2 months ago

Romario Ibarra put in a promising cross into the Azulcrema box
10:43 PM2 months ago

Dangerous cross from a corner kick that ends in a good shot by Federico Viñas but the local goalkeeper controls the ball without problems.
10:38 PM2 months ago

THE FIRST CARD OF THE MATCH HAS ARRIVED! Emmanuel Aguilera is yellow carded after cutting off a counterattack by Romario Ibarra.
10:34 PM2 months ago

The ball just misses the post! After a cross from Mauro Lainez, Henry Martín heads the ball just wide of the post.
10:28 PM2 months ago

Jorge Sanchez tries from outside the area but his shot goes into the stands.
10:20 PM2 months ago

THE AMERICAN ASSAULT CONTINUES! Miguel Layún tries from outside the area and it's all just a danger alert for Ustari.
10:16 PM2 months ago

PACHUCA TRIES AGAIN! Nico Ibañez gets off a weak shot that ends up in Ochoa's hands.
10:13 PM2 months ago

The second half kicked off at the Estadio Hidalgo, Tuzos and Águilas are tied at one apiece so far.
9:57 PM2 months ago

The first half is over, América and Pachuca are tied 1-1 at the moment.
9:53 PM2 months ago

GOOOOOOOOOOOL FOR AMÉRICA! THE EQUALIZER FOR THE EAGLES.
9:47 PM2 months ago

This is how the goal was scored

It was in this way that Pachuca took the lead with a fantastic finish in the area by Cabral.

Pachuca begins to dominate the match! Luis Chavez takes a powerful shot that ends up going into the stands.
9:40 PM2 months ago

Jorge Sánchez has been fouled in the attacking half and gets a free kick with a free kick at goal.
9:33 PM2 months ago

Good counter-attack by América that ends with Córdova's shot attempt for a corner.
9:30 PM2 months ago

AMÉRICA COMES CLOSE! Córdova sends in a superb cross that is very well finished by Jorge Sánchez, but Óscar Ustari reacts excellently and clears the ball off the line.
9:19 PM2 months ago

Fernando Madrigal tries a shot from outside the area but the attempt ends up wide of the far post.
9:13 PM2 months ago

Miguel Layún's cross found Henry Martín inside the box, but the Yucatecan's shot ended up just wide of the goal.
9:11 PM2 months ago

Álvaro Fidalgo attempted a cross in search of Sebastián Córdova but failed to make contact with the ball and everything ended in a goal kick.
9:05 PM2 months ago

The ball is rolling on the Estadio Hidalgo turf, Pachuca faces the general leader of the competition.
8:50 PM2 months ago

In a few moments we start with the match

In a couple of minutes we will begin with the broadcast of the match: Club Pachuca vs Club América, match corresponding to the 11th matchday of the Apertura Grita México 2021.
8:41 PM2 months ago

This is how Pachuca will start the match against América's Eagles, they didn't hold anything back and are going all out. 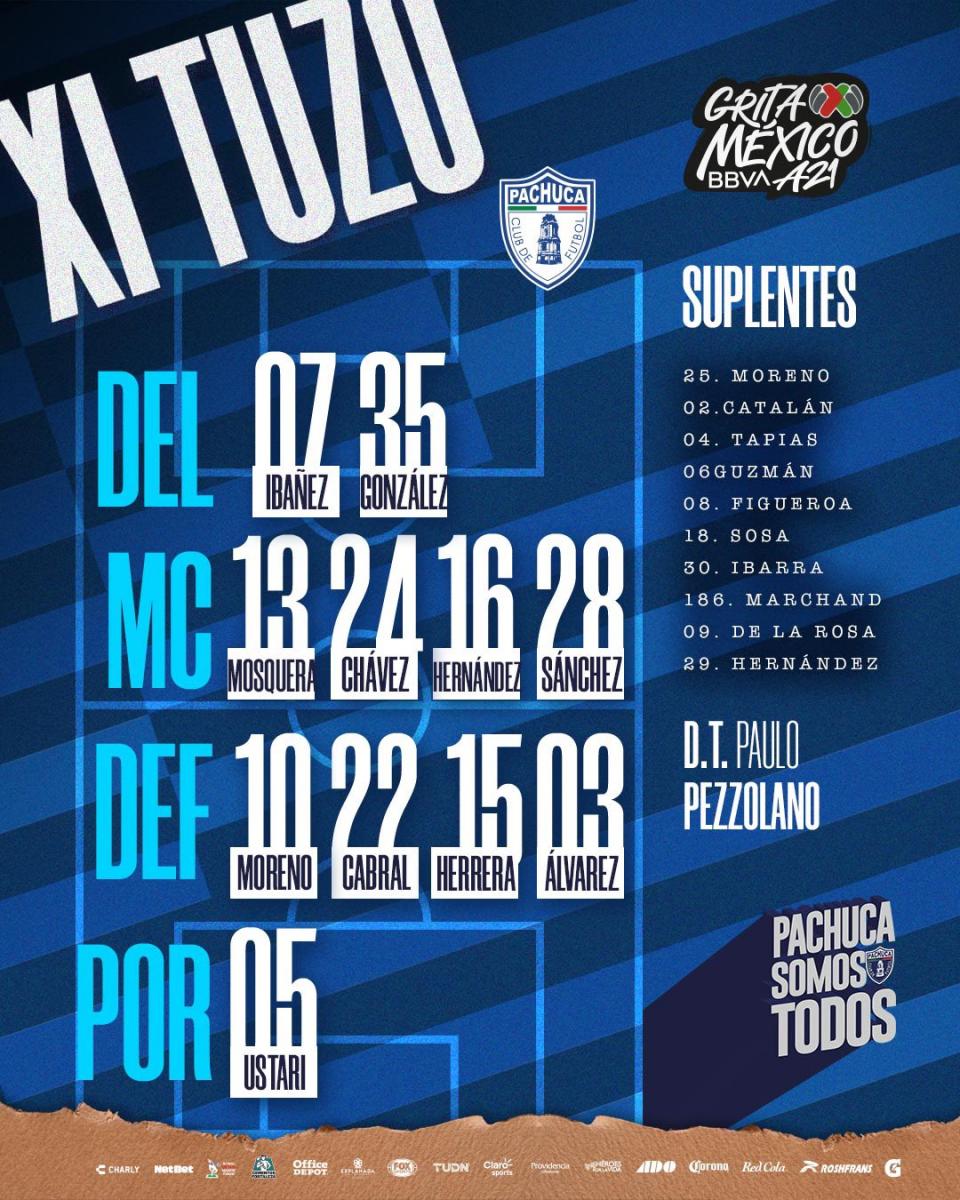 Memo Ochoa is already on the field at the Hidalgo Stadium doing his respective warm-up exercises prior to the start of the match.

Duels between these two!

Pachuca and América usually give us great matches when these two teams meet, whether in the regular or group stage. Last time they stole the show in the quarterfinals with a pair of great games at the Estadio Hidalgo and the Estadio Azteca, resulting in a 5-5 aggregate score in favor of Los Tuzos on away goals. Let's hope the luck of the goal smiles again today!
8:26 PM2 months ago

Pachuca has arrived home and is ready to face the Eagles. 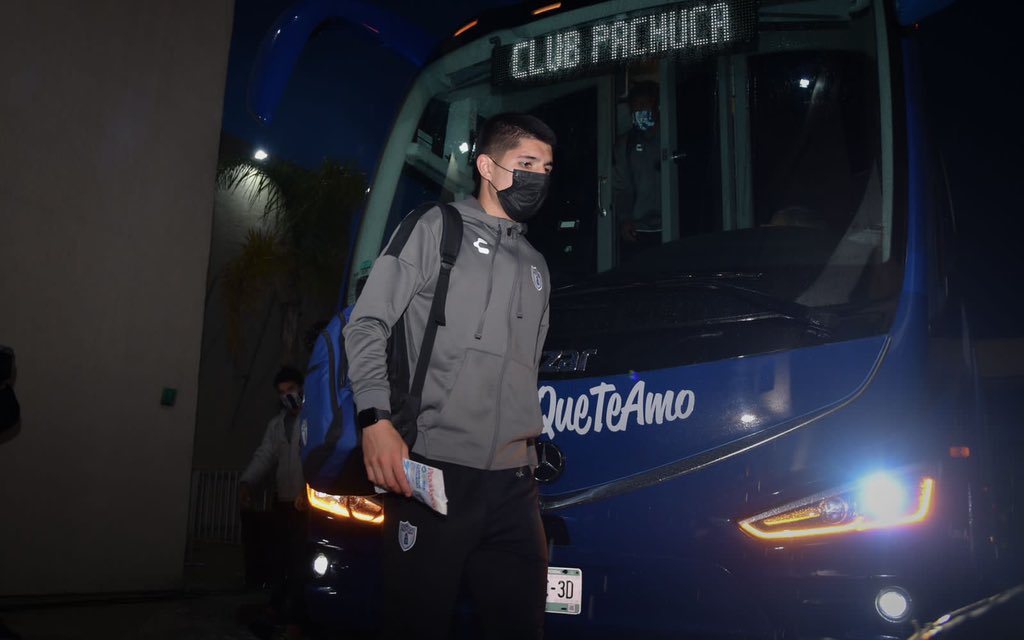 The eagles are here!

América is already inside the Hidalgo Stadium to face their match against Pachuca for Matchday 11. The last time these two gave us a great match in the first leg of the Guard1anes 2021 Quarter-Finals.

How does Pachuca arrive?

Pachuca will host the Águilas in midweek and will visit Puebla on the weekend, before the October FIFA Day. Paulo Pezzolano's side urgently need points to get into the playoff zone. The Tuzos have failed to live up to expectations after an encouraging start against León.
8:11 PM2 months ago

How did America fare last week?

The Azulcremas hosted their fierce rivals last Saturday night at the Estadio Azteca for the 82nd edition of the Clasico Nacional. In a duel that was marked by controversy, bad refereeing, rivalry and the return of the fans to this Clasico at the Coloso de Santa Ursula, the team coached by Santiago Solari ended up tying 0-0 against Guadalajara. With this result, América maintained its undefeated record at home, however, it put its leadership at stake, as it is only one point ahead of second place.
8:06 PM2 months ago

The wait is over, today the Liga MX returns and brings a duel that promises much in the Bella Airosa when Pachuca receives América at the Hidalgo Stadium. On the one hand, the locals have the mission of continuing to add points to get into the playoffs and try to climb positions in the general table to avoid having to suffer at the end of the regular phase as they did last season. Meanwhile, América's eagles are at the top of the general table with 21 points, however, they need to leave the Hidalgo Stadium with a victory, as Monterrey, Toluca and Atlas are all in their sights and a loss or a draw could have serious consequences for the Coapa team.
8:01 PM2 months ago

Do not miss a detail of the match with the live updates and commentaries of VAVEL. Follow along with us all the details, commentaries, analysis and lineups for this Pachuca vs America match.
7:56 PM2 months ago

What time is Pachuca vs America match for Liga MX?

This is the start time of the game Pachuca vs America of 28th September in several countries:

America's idol and made in the eagle nest, Guillermo Ochoa, will be the player to follow during this match throughout the 90 minutes, the starting goalkeeper of America and the Mexican national team has become a real wall under the three posts. In his two spells with the Azulcremas he has played 26,220 minutes in which he has made 290 appearances in the starting lineup, he has also registered 357 goals against and 81 clean sheets, so Memo will be the player who could tip the balance from the defensive side in favor of the eagles. 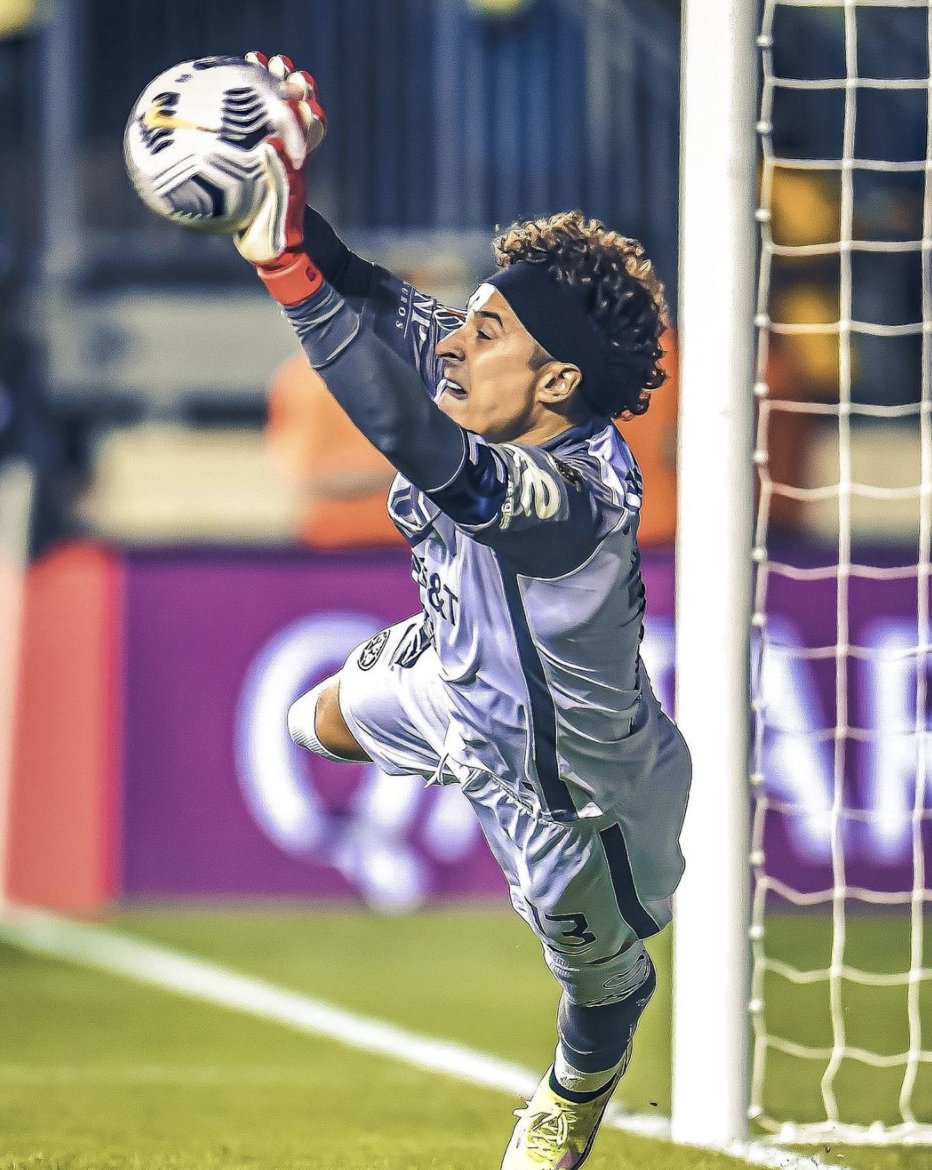 One of the players with the shortest track record in Liga MX and one of the best known by Mexican football fans, Nico Ibañez, the Argentinean has earned the respect and admiration of several soccer lovers for his great performance in every match. With the Tuzos he has played 532 minutes of which he has played in 7 games in the starting lineup, he has scored 1 time, however, these numbers are misleading since the Argentinean stood out for being a real goal scorer with the Atlético de San Luis squad and could break the net at any time. 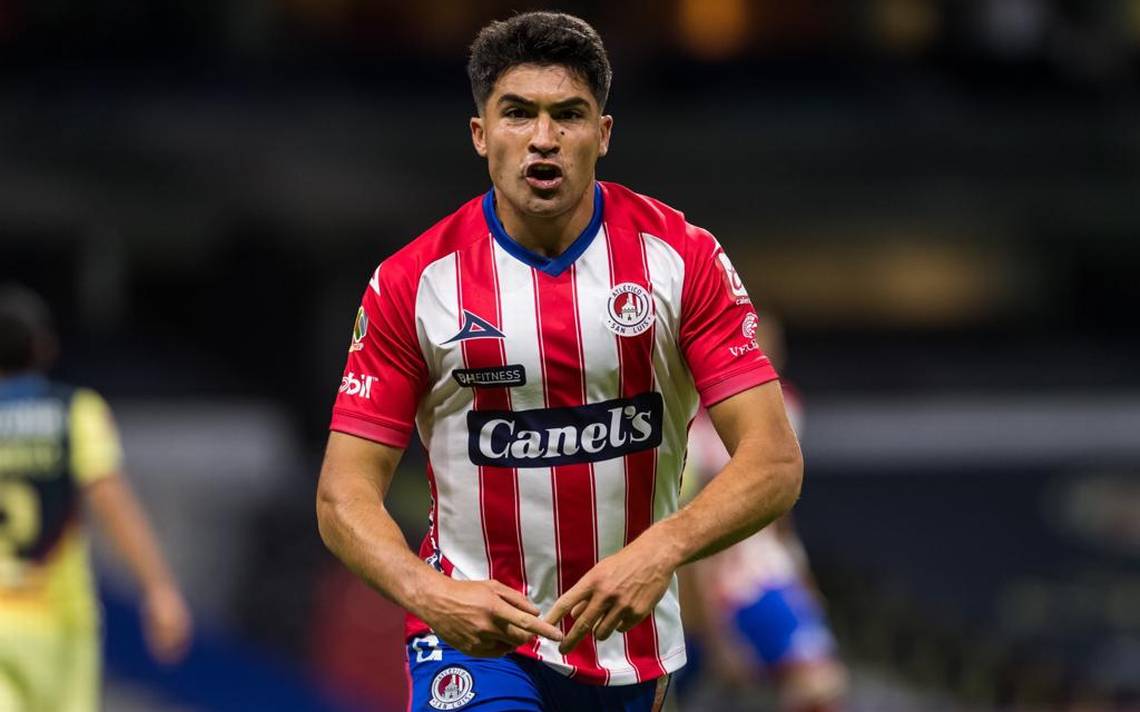 América and Pachuca have met on a total of 53 occasions (18 wins for the Azulcremas, 12 draws and 23 wins for Pachuca), with a slight advantage for the home side. However, these duels tend to be very exciting, as the Eagles have scored 85 goals to Pachuca's 83. Their last meeting was in the second leg of the Guard1anes 2021 quarterfinals at the Azteca Stadium, where the score was 4-2 in favor of the Americans.
7:26 PM2 months ago

It was inaugurated on February 14, 1993 and became the home of Pachuca, which previously played its home games at the Mexican Revolution Stadium. The inaugural game was between the Tuzos and Pumas of the UNAM, with a score of 0-2. It has subsequently been rebuilt and modernized.

It has a camera monitoring system that allows for comprehensive surveillance and two giant screens. It is designed in such a way that it allows good visibility from any of its seats, it has a VIP area with boxes where there is a restaurant in service during the events. It also has 5 dressing rooms, press, chronicle and photography rooms. The stadium has a "tunnel of time" in its bowels, where the graphic history of the Pachuca club is exhibited, and an interactive museum for children's entertainment. 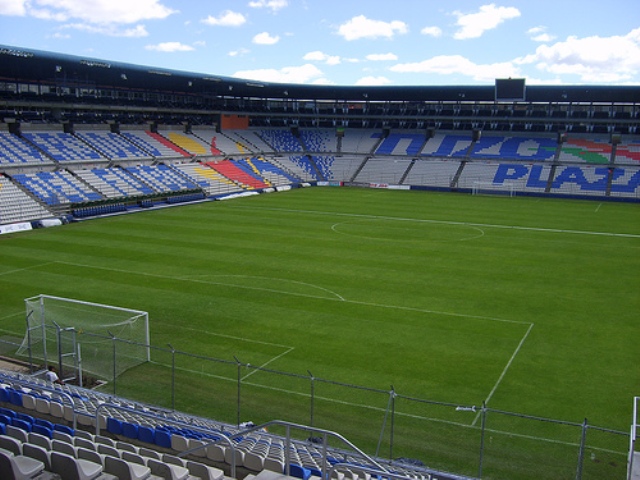 It is not unusual to see the team of the Aguilas del América in the highest places in the general table, after having a good Guard1anes 2021 tournament under the command of Santiago Solari, the Azulcrema squad will look for this to be the tournament of their dreams by winning the Concahampions and Liga MX titles, but first they must secure a place in the Mexican soccer playoffs and take three points against the Tuzos. Last matchday they drew against their fierce rivals and the next match after Pachuca is the capital city derby, which is why it will be very important to leave the Hidalgo Stadium with a victory in this 10th date of national football.

Be strong at home

The Pachuca Tuzos have had a tough start to the tournament and are in 13th place overall with 10 points, the result of 3 wins, 1 draw and five defeats so far in the championship. They are also one of the teams with the worst defenses, having allowed 10 goals in their own goal. Last matchday they managed to beat Necaxa by the minimum difference also in the Bella Airosa, which means that by receiving a game at home could mean another opportunity to continue adding three points and dream of reaching the playoffs or securing a place in the play-offs. 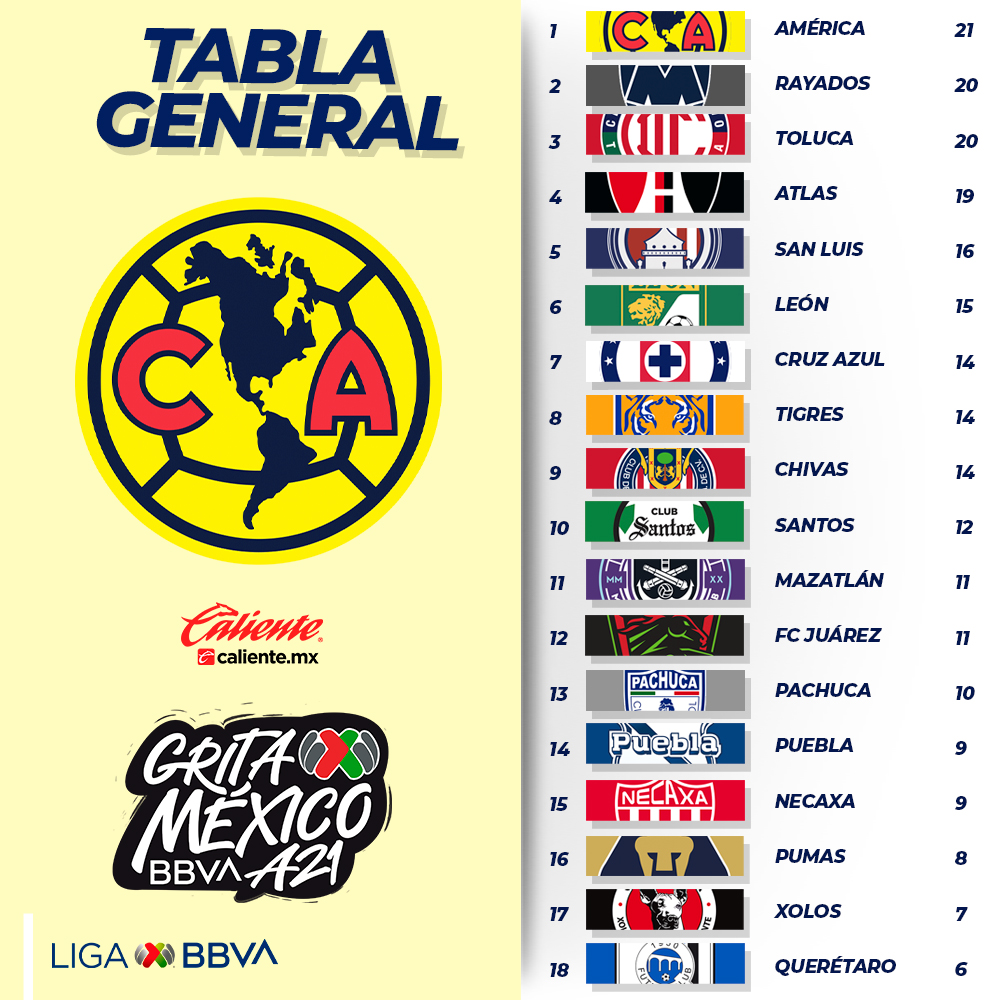 The Pachuca vs América match will be played at The Hidalgo Stadium, in Pachuca, Mexico. The kick-off is scheduled at 22:00 pm ET.
7:01 PM2 months ago

Welcome to VAVEL.com’s LIVE coverage of the 2021 Liga MX: Pachuca vs América!