Thank you for listening to the Europa League matches here on VAVEL. Have a good afternoon/evening and see you next time!
4:54 PM8 months ago

Lazio return to the field on Sunday (3), when they face Bologna. Lokomotiv face Rostov on the same day.
Standings provided by SofaScore LiveScore
4:52 PM8 months ago

With goals from Basic and Patric, Lazio beat Lokomotiv and take the three points home!
4:42 PM8 months ago

Substitution in Lokomotiv: Zhemaletdinov and Anjorin left to enter Petrov and Lisakovich.
4:34 PM8 months ago

Milinkovic-Savic took out the defender already inside the area and tried to dive inside the small area, but missed the goal! And then Moro got the ball on the left and hit it out!
4:32 PM8 months ago

Substitution in Lazio: Lazzari and Pedro left to enter Moro and Marusic.
4:30 PM8 months ago

Substitution in Lokomotiv: Kerk comes in in place of Maradishvili.
4:25 PM8 months ago

Yellow card to Lazzari, for a foul in the midfield.
4:22 PM8 months ago

Milinkovic-Savic received on the right and crossed low for Pedro to hit it hard and hit the crossbar!
4:18 PM8 months ago

Substitution in Lazio: Luis Alberto and Cataldi left, and Lucas Leiva and Milinkovic-Savic came in.
4:05 PM8 months ago

Yellow for Beka, for a hard tackle in the midfield.
4:04 PM8 months ago

STARTS THE SECOND HALF

Muriqi makes the first touch on the ball and it rolls into the second half!
4:03 PM8 months ago

The teams appear on the field for the ball to roll for the second half!

With goals from Basic and Patric, Lazio goes on to beat Lokomotiv and take the three points home! And before the end a yellow card for Cataldi.
3:42 PM8 months ago

And in the closed corner the ball was deflected, where Patric arrived finishing into the back of the net!
3:39 PM8 months ago

Felipe Anderson, on Lokomotiv's exit error, received the ball on the right and hit it hard, crossed, but to a great save by Guilherme!

Smolov received the ball in the middle and tried to shoot, but the goalkeeper saved with his feet!
3:20 PM8 months ago

Felipe Anderson received on the right and crossed to Immobile, who, dominated and hit hard, but out, on the right side of the goal, with a deviation!
3:14 PM8 months ago

Pedro received on the right, in a good passing play, and crossed for Basic to head the ball into the back of the net!
3:10 PM8 months ago

Immobile, on a corner following the shot, headed down and out!
3:09 PM8 months ago

Luis Alberto took a chance from outside the area and sent it dangerously wide of the right side of the goal!
3:01 PM8 months ago

Smolov makes the first touch on the ball and it rolls into the first half of this Europa League match!
2:59 PM8 months ago

The players leave the pitch to continue their preparation and soon they will be back on the pitch for the ball to roll!

We now have some games opening round 2 of the Europa League. So far Antwerp are drawing 0-0 with Frankfurt. Real Sociedad and Monaco, as well as Napoli and Spartak are drawing 1-1.

The players go up to the Olympic Stadium to start warming up for the match.

Lokomotiv is lined-up and comes to the field with: 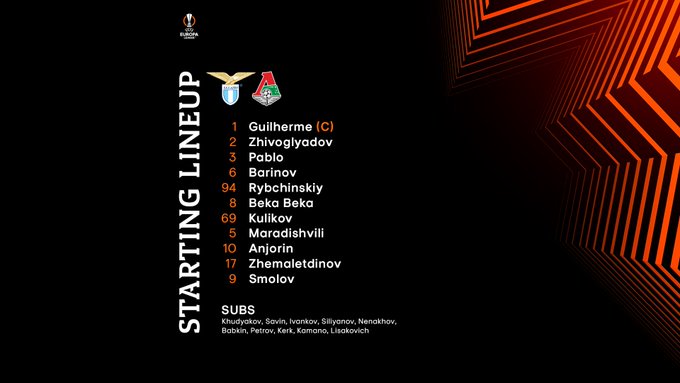 Lazio is lined-up and comes to the field with: 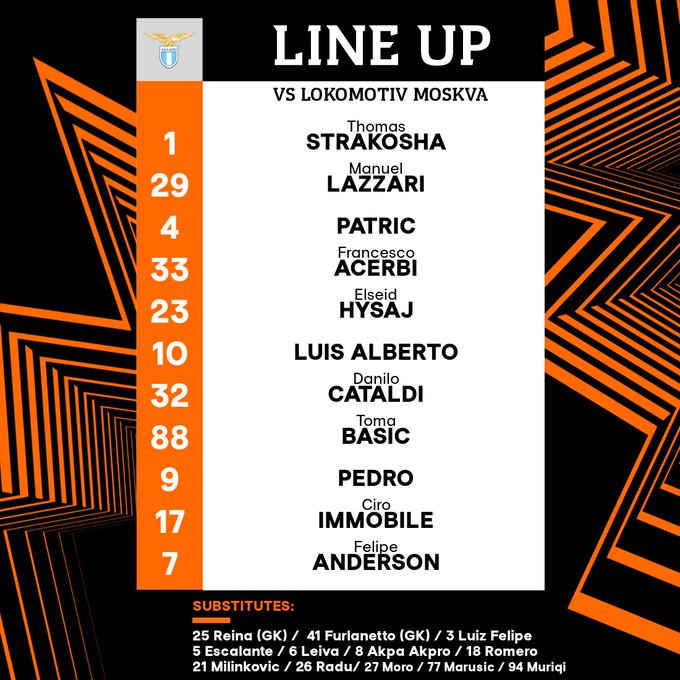 Now the broadcast of the Europa League match between Lazio and Lokomotiv begins!

Do not miss a detail of the match with the live updates and commentaries of VAVEL. Follow along with us all the details, commentaries, analysis and lineups for this Lazio vs Lokomotiv Moscow match.
2:00 PM8 months ago

How to watch Lazio vs Lokomotiv MoscowLive in TV and Stream

If you want to watch the game Lazio vs Lokomotiv Moscow live on TV, your options is: none.

If you want to directly stream it: Streaming services and Paramount+, TUDUN.com, TUDUN App, TUDUNxtra app.

What time is Lazio vs Lokomotiv Moscow match for Europa League?

This is the start time of the game Lazio vs Lokomotiv Moscow of 30th September 2021 in several countries:

The probable Lokomotiv for the match is: Guilherme, Silyanov, Cerqueira, Barinov, and Zhivoglyadov; Kulikov, Beka, and Anjorin; Zhemaletdinov, Smolov, and Kamano. 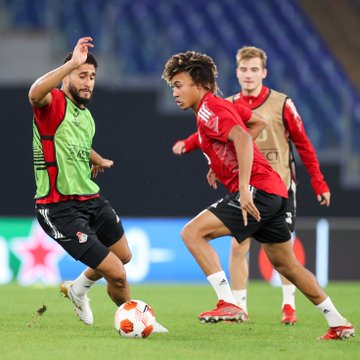 The probable line-up for the match is: Strakosha, Marusic, Felipe, Acerbi and Hysaj; Alberto, Lucas Leiva and Milinkovic-Savic; Anderson, Immobile and Pedro.

Lazio will not be able to use Zaccagni, who is injured, while Lokomotiv will not have Tiknizyan, suspended, as well as Miranchuk, Magkeev and Zé Luis, injured.
1:35 PM8 months ago

In the Europa League Galatasaray leads the group with three points, while Olympique and Lokomotiv have one and Lazio have no points.
1:30 PM8 months ago

Lazio, through six games, have 11 points, tied with Atalanta and one behind Roma and Fiorentina, in sixth place. In nine games Lokomotiv has 17 points, six behind Zenit, two behind Dynamo and one ahead of Krasnodar and CSKA, staying in third place.

Lokomotiv, on the other hand, are coming from two draws, both without goals. On Saturday (25) it was against Khimki and on Monday (20) it was against Ural, both in the Russian Championship.
1:20 PM8 months ago

Lazio comes from a win and a draw in the last two games they played, both in Serie A. The victory was last Sunday (26), against Roma. Milinkovic-Savic opened the scoring, Pedro increased the lead, Ibañez decreased it, Felipe Anderson increased it once more, and Veretout closed the score 3-2. Before that the tie was on Thursday (23), with Torino, when Pjaca opened the scoring and Immobile equalized in second-half stoppage time.