Thank you for following this match on VAVEL USA. Until the next time!
12:16 AM21 days ago

On matchday 13, Chivas hosts Toluca and Atlas visits Mazatlan.
12:09 AM21 days ago

The referee adds four more minutes to the match.
12:04 AM21 days ago

Atlas: Quiñones leaves and Trejo enters.
12:04 AM21 days ago

Barbosa! Shot from outside the area that passes close to the goal.
12:01 AM21 days ago

Chivas: Molina, Vega and Angulo are out; Torres, Huerta and Zaldívar are in.
12:00 AM21 days ago

Last minutes of the match. Chivas begins to have possession.
11:46 PM21 days ago

Chivas began to get into the area. Angulo went in alone, but the defense got in the way to prevent his shot on goal.
11:42 PM21 days ago

CAMILO! The Atlas goalkeeper avoids the equalizer after Briseño's shot inside the small area.
11:41 PM21 days ago

ALEXIS! Vega took the free kick directly, but Camilo Vargas made a great save and sent it for a corner kick.
11:41 PM21 days ago

GUDIÑO! Angulo was left alone in the box after a corner kick, Gudiño read the play well and correctly blocked the shot.
11:35 PM21 days ago

Atlas: Anderson Santamaría is out, Axel Aguirre is in.
11:29 PM21 days ago

FURCH! A header from the red-and-black striker where Gudiño stretches his arm to prevent the second goal.
11:24 PM21 days ago

Olivas! A cross into the area where the rojiblanco defender heads away a goal-scoring opportunity.
11:19 PM21 days ago

The referee adds eight minutes to the first half.
10:54 PM21 days ago

REYES! A shot from the red-and-black who takes advantage of a rebound. However, his shot goes just wide of the left post.
10:48 PM21 days ago

Tempers flared in the Clásico Tapatío. Red card for Cristian Calderón and yellow card for Jairo Torres and Aldo Rocha.
10:36 PM21 days ago

In the first fifteen minutes of the match, both teams reached the opponent's area without much danger.
10:23 PM21 days ago

The referee cancels the yellow card and changes it to a red card. Hiram Mier is sent off.
10:22 PM21 days ago

The referee goes to the VAR to check a possible expulsion of Hiram Mier.
10:20 PM21 days ago

Gudiño! The goalkeeper was attentive to Hiram Mier's defensive lapses. Raúl comes out correctly with a sweep to avoid a goal-scoring opportunity.
10:12 PM21 days ago

Chivas came close after a corner kick. A cross into the area where Mier was about to shoot, but the Atlas defense made a good save.
10:09 PM21 days ago 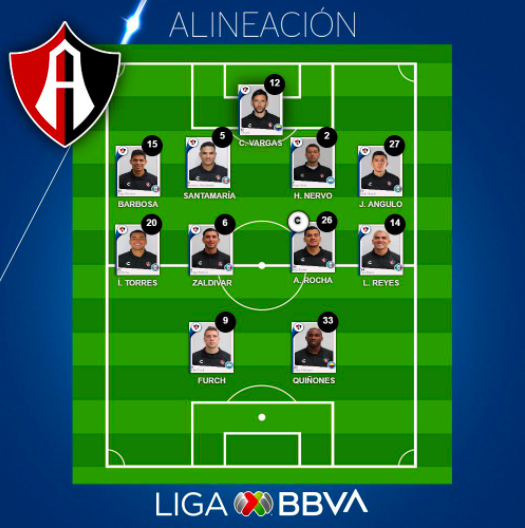 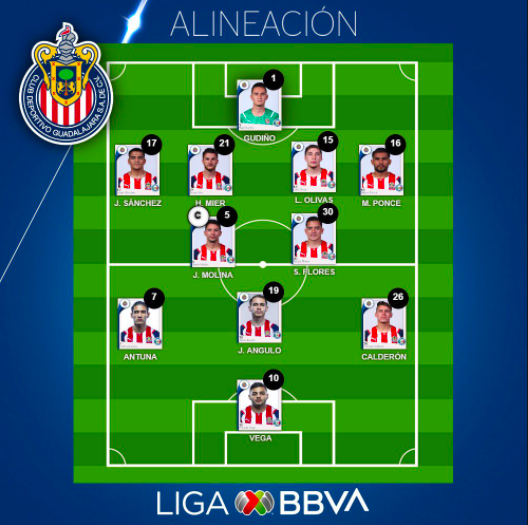 Both Chivas and Atlas players are already on the field at the Akron Stadium doing warm-up exercises prior to the match that is about to kick off in a few minutes. 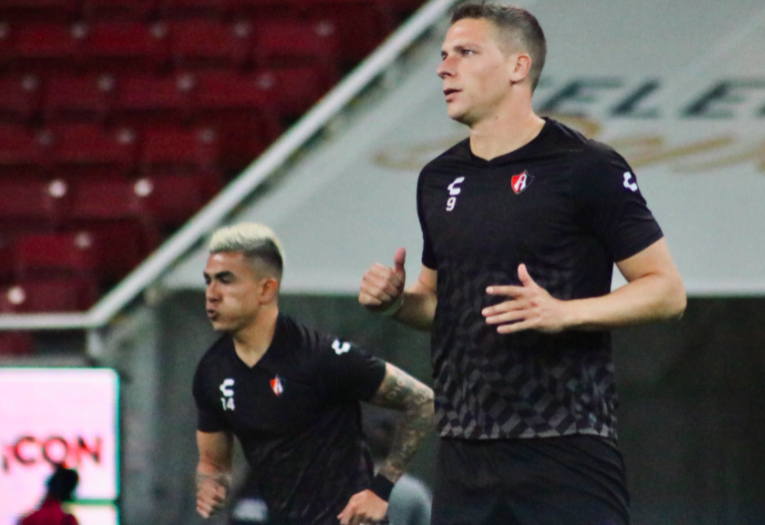 Clasico Tapatio in the lower categories

The lower categories have already faced each other and each side won. Chivas' U-18 team won 3-0 at the Verde Valle facilities. On the other hand, the red-and-black U-20s won their match with a score of 0-2.
9:43 PM21 days ago

The Akron stadium will open its doors to accommodate 50% more fans. The authorization for the admission of fans was up to 33%, but the government of the State of Jalisco authorized an increase to 50%, which means that a little more than 24 thousand people will be able to attend the Clásico Tapatío at the Akron Stadium. 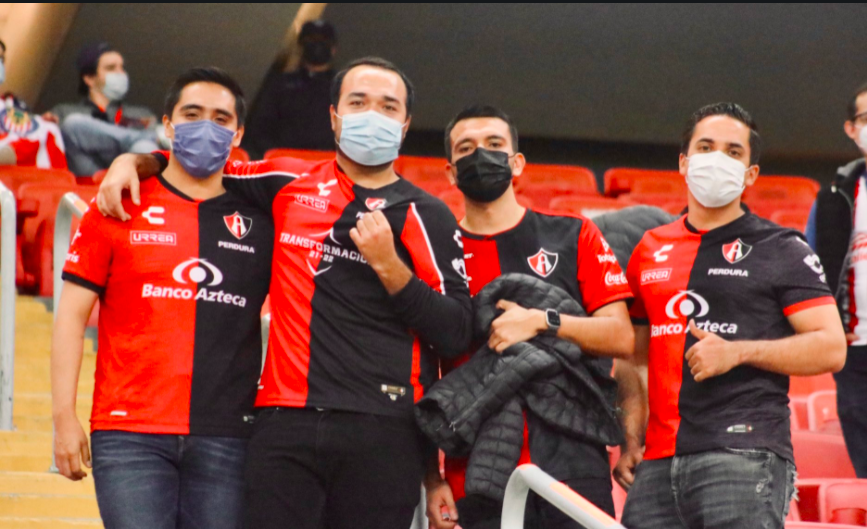 The classic between Guadalajara and Atlas is considered the oldest classic in Mexican football since it began in 1916. The reason for their rivalry, besides being clubs from the same city, is the social class that followed each team.
9:36 PM21 days ago

With the respective hygiene measures in place, the players called up for this match between Chivas and Atlas have arrived at the Akron Stadium. 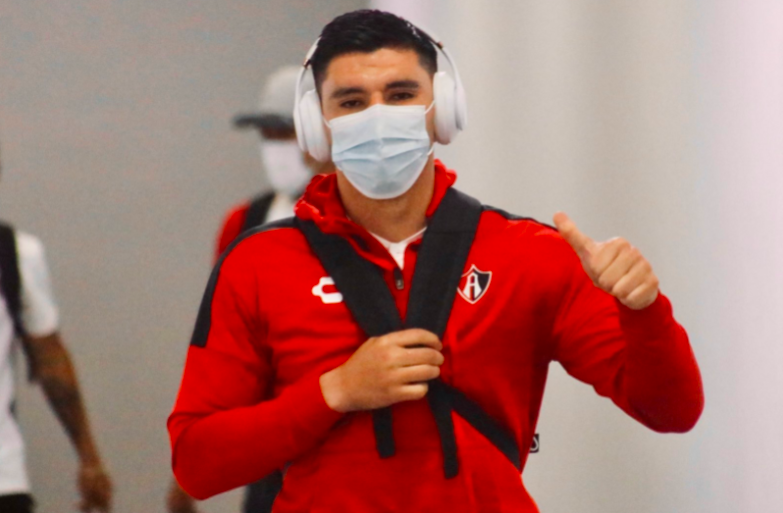 Many Mexican players have played for these two Jalisco clubs. Some of them are great figures of the red and white institution, such as its top scorer in its history, Omar Bravo, or the emblematic goalkeeper, Oswaldo Sánchez.  They are also joined by players such as Ignacio Calderón, Fernando Quirarte, Isaac Brizuela, José Luis Real, Gerardo Mascareño, among others.
9:26 PM21 days ago

So far in the Grita México A21 tournament, the red-and-black team has the best defensive numbers, having allowed only five goals in 11 games and their opponents have not managed to score more than two goals in 90 minutes. Atlas is the best defense in the tournament so far.
9:21 PM21 days ago

The statistics in recent years don't play in favor of the Rojinegros, and the fact is that the last six meetings have been wins for the Rebaño Sagrado. The Rojinegros recorded their last victory in the Clásico Tapatío in the Clausura 2018 at the Estadio Jalisco. In the most recent match between these two teams, Guadalajara won 0-1.
9:16 PM21 days ago

The Akron Stadium will be the venue for this match. It is located in the city of Zapopan, Jalisco, Mexico, and is the home of Chivas. It was inaugurated in July 2010 and has a capacity of just over 49 thousand spectators. Today it will be able to hold 50% of its maximum capacity. 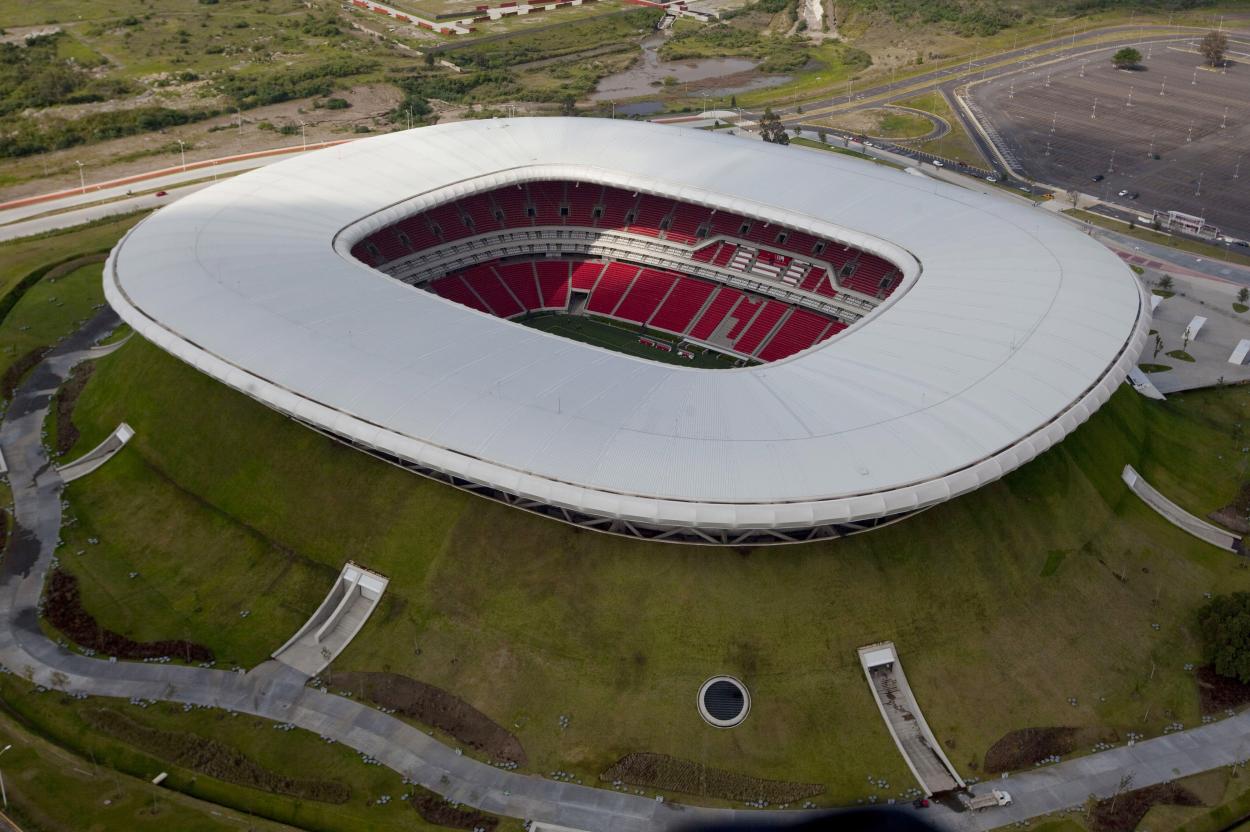 We are just under an hour away from the Clásico Tapatío between Chivas and Atlas at the Estadio Akron. Both teams are coming off a midweek loss and today they will be looking not only for the three points, but also for the honor and joy of their fans. Will one of them make it? Follow our coverage on VAVEL.
9:06 PM21 days ago

Do not miss a detail of the match  Chivas - Atlas with the live updates and commentaries of VAVEL. Follow along with us all the details, commentaries, analysis and lineups for this match.
9:01 PM21 days ago

How to watch Chivas - Atlas Live Stream on TV and Online?

If you want to watch the game Chivas vs Atlas live on TV, your options are: Telemundo Deportes and Universo

If you want to directly stream it: NBC sports app, Universo app, and Telemundo app

Julio Furch | After overcoming an injury that kept him away from the field for three months, the Argentine striker has been able to recover his best level and is so far his team's top scorer along with teammate Julián Quiñones with 4 goals. Furch is a good header and can do a lot of damage to the opponent's defense from set pieces. 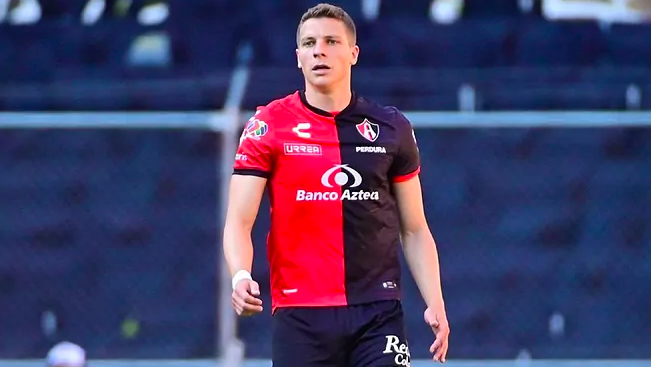 Alexis Vega | The Olympic medalist did not return to his club in fine form, but his verticality and special talent for scoring against Atlas will undoubtedly be of great importance for the Foxes. The red and white striker has accumulated 4 goals against the red and blacks, in his first match he scored 3 and in the following tournament, he scored a great goal to give a certain flavor to the Clasico Tapatio. 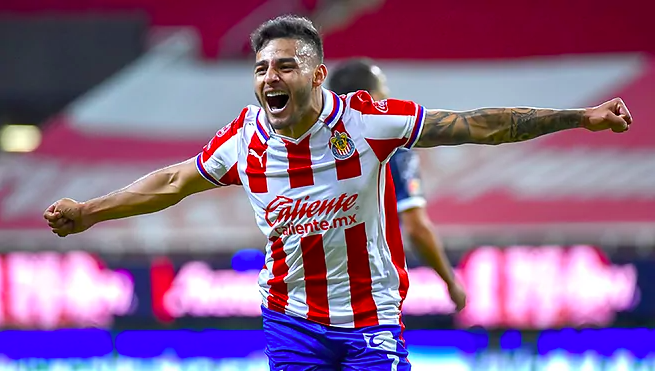 Atlas: Staying at the top

The resurgence of the red-and-black team is being achieved this season and Diego Cocca started off on the wrong foot, as in his first tournament at the helm, they finished in the last places. Last season, the Jalisco squad was able to reach the playoffs, but Puebla knocked them out of the semifinals. Now, the Zorros have a better performance and are having a good tournament that places them only three points behind the general leader, América. Atlas is coming from a painful 1-0 defeat at home against Puebla, however, Cocca's men will be looking for the motivation they need to win the derby and remain at the top of the general table. The red-and-black team is currently in fourth place with 19 points, the result of five wins, four ties and only two defeats. 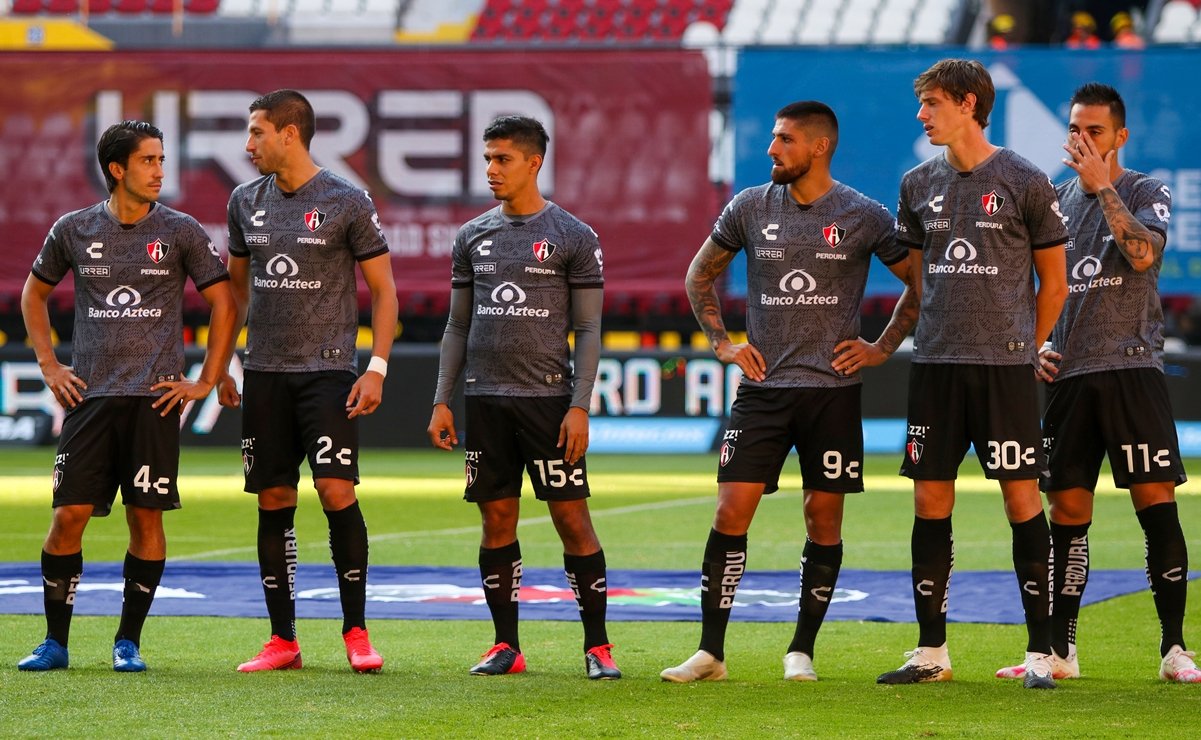 Chivas: For the seventh win over Atlas

The red and white team, under the interim management of Marcelo Michel Leaño, has had a rather irregular tournament and after a week since Vucetich's dismissal, the herd has still not found a good soccer performance. In this week of nine points, Chivas have been able to accumulate just one and that was with a draw against América. Last Wednesday, the Rebaño faced what at the time was the last place in the table, however, the Gallos managed to get out of the basement thanks to a 1-0 victory at the Estadio Corregidora. Guadalajara must take three points if they want to stay in the playoff zone, as they are currently in ninth place with 14 points from three wins, five draws and three defeats. 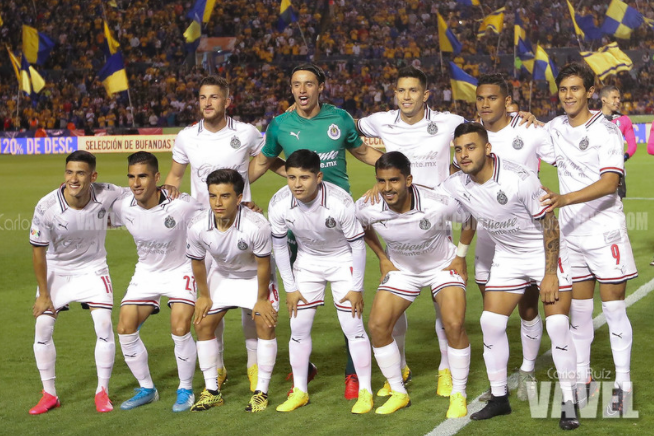 This afternoon, the Saturday activity ends with a very attractive match. Nothing more and nothing less than the Clásico Tapatío. Both Chivas and the red-and-black Atlas team have just lost in the double-header and today they will be playing for more than just three points. The red-and-whites are still with an interim coach who will be looking for a victory today so that he can get the board's vote of confidence, while the Zorros want to break the Rebaño's six-game winning streak over the red-and-blacks.
8:16 PM21 days ago

The Chivas vs Atlas match will be played at the Akron Stadium, in Zapopan, Jalisco, Mexico. The kick-off is scheduled at 10 pm ET.
8:11 PM21 days ago