Thank you for following this match on VAVEL USA. Until the next time!
4:55 PM7 months ago

On matchday 9, Granada will host Atletico Madrid while Sevilla will visit Celta Vigo.
4:51 PM7 months ago

A brawl breaks out on the pitch. The referee cautions Lucas Ocampos.
4:49 PM7 months ago

The referee adds three more minutes to the match.
4:49 PM7 months ago

Diego Carlos is sent off for a double yellow card. Luis Suárez was also cautioned.
4:47 PM7 months ago

MAXIMIANO IS ALREADY A FACTOR! Granada's goalkeeper makes a great save after a shot that was heading for goal.
4:46 PM7 months ago

Sevilla keep trying! Another cross into the area where Munir stretches to finish, but he doesn't reach it and the ball goes wide.
4:44 PM7 months ago

GRANADA IS SAVED! A cross into the area that Munir looked for with a header, but the defense deflected for a corner kick to prevent the goal.
4:37 PM7 months ago

Sevilla continues to get into the opponent's area. Koundé's header from a corner kick passes very close to Granada's goal.
4:34 PM7 months ago

Yellow cards for Quini and Acuña.
4:31 PM7 months ago

MAXIMIANO! Great save by the Granada goalkeeper after a shot by Munir who was alone in the area.
4:28 PM7 months ago

LAMELA! Navas' cross is headed inside the box by the Argentine, but the ball goes over the crossbar.
4:18 PM7 months ago

Another goal disallowed for Granada for offside.
4:06 PM7 months ago

Granada is saved. Series of rebounds in the area where Sevilla fails to connect correctly to shoot at goal.
4:03 PM7 months ago

JORDAN! Again Sevilla tries again with a cross where Jordan connects with the ball, but his shot goes near the right post.
3:41 PM7 months ago

Sevilla tries a shot from outside the area that passes close to the goal.
3:39 PM7 months ago

Maximiano concentrated to cut off a dangerous Sevilla move where Fernando was already alone in the area.
3:33 PM7 months ago

Rochina's left-footed shot from outside the box to score the first goal of the match. 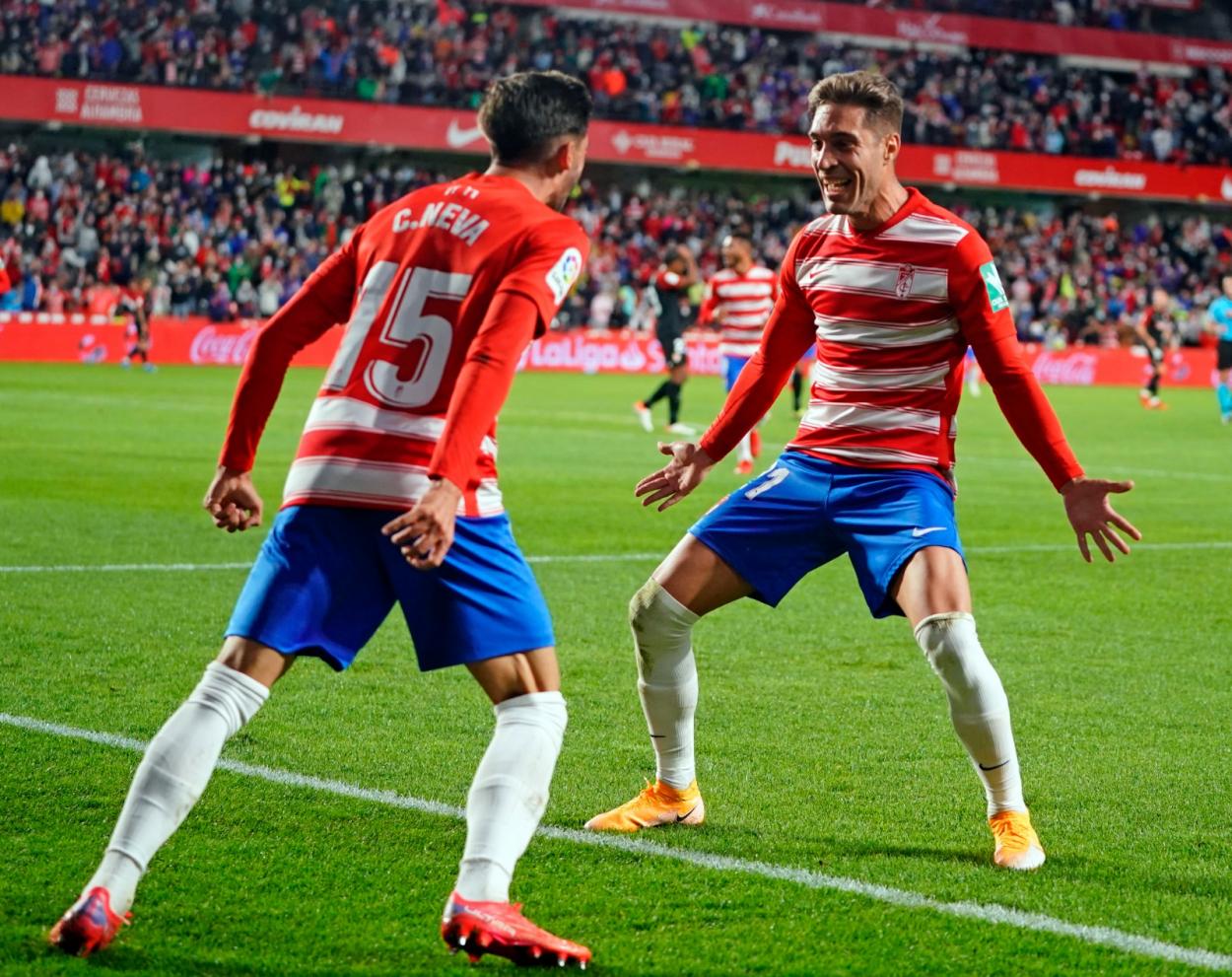 Goal disallowed for Granada for offside.
3:26 PM7 months ago

A very tight cross into the area that ends with Maximiano fending off the danger. Sevilla keeps coming.
3:21 PM7 months ago

In the first fifteen minutes of the match, Sevilla gradually had more and more possession of the ball.
3:20 PM7 months ago

GRANADA IS SAVED! Suso's shot from the edge of the area is correctly caught by Maximiano in the goal.
3:12 PM7 months ago

Granada is pressing very high up where it is hurting Sevilla, which is unable to have a clear exit.
3:05 PM7 months ago

A pass filtered to Montoro who fails to connect with the ball. He was alone in the area, but the ball went wide.
3:03 PM7 months ago 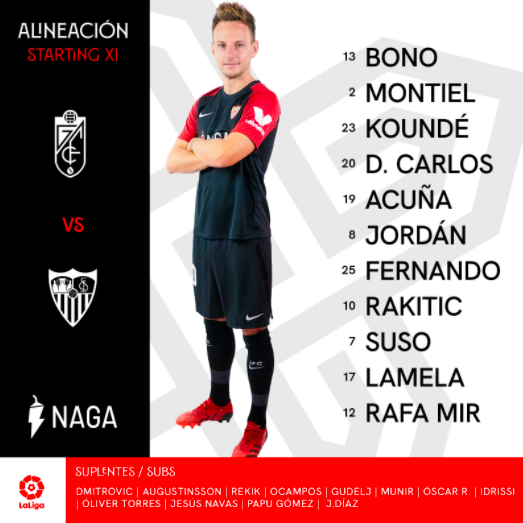 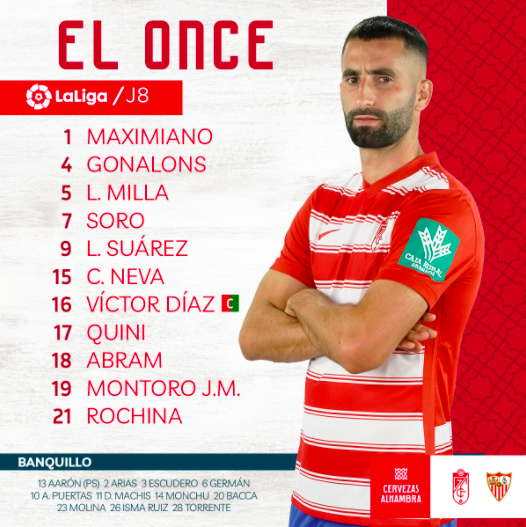 Both teams are already on the pitch of Los Cármenes Stadium doing warm-up exercises. 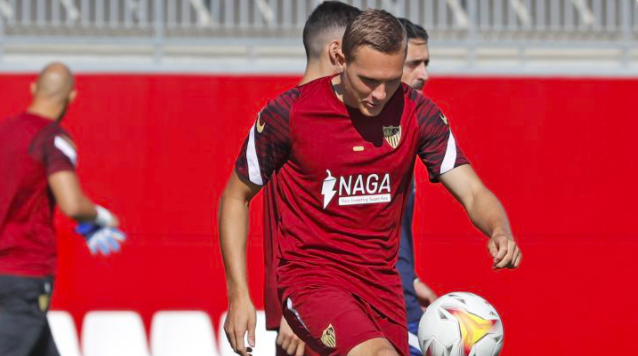 Spanish stadiums can once again be filled to 100% capacity as of Matchday 8 following the decision agreed by the Spanish Interterritorial Health Council, which brings together the central government and the regions. Previously, the public was limited to 80%, and although some areas have their own local restrictions, all clubs will have the option of hosting 100% of the total capacity of their respective stadiums.
2:26 PM7 months ago

A tough loss for this match will be that of En-Nesyri, Sevilla's goal scorer. The Moroccan was injured in the match against Espanyol and although it was estimated that it was not a serious injury, his club announced that En-Nesyri will be out of action for at least two months. 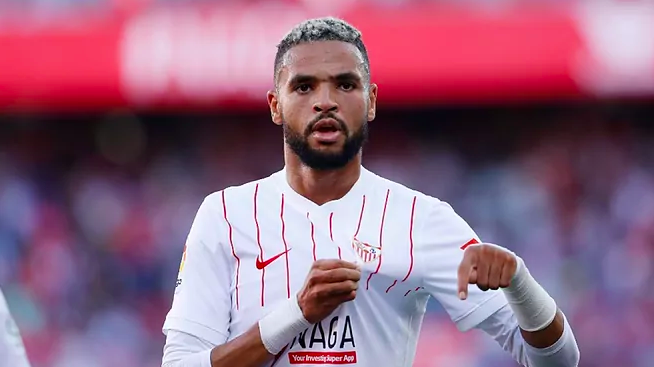 In the last five matches between these two clubs, the balance is in favor of Sevilla with four victories and only one win for Granada. Los Nazaríes have not managed to defeat Los Sevillanos since October last year. In their most recent match, Sevilla won 2-1 at home.
2:14 PM7 months ago

With the respective sanitary measures imposed by the Spanish soccer federation, the players called up for the match between Granada and Sevilla are already at the Los Cármenes stadium. 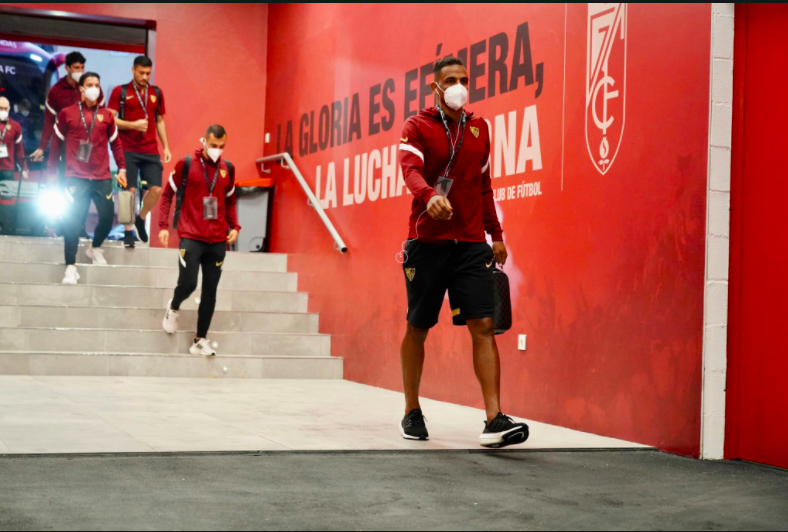 The Nuevo Estadio de Los Cármenes is a soccer field located in Granada, Spain. It is the venue where Granada plays its home matches. It has a capacity for just over 19 thousand spectators. 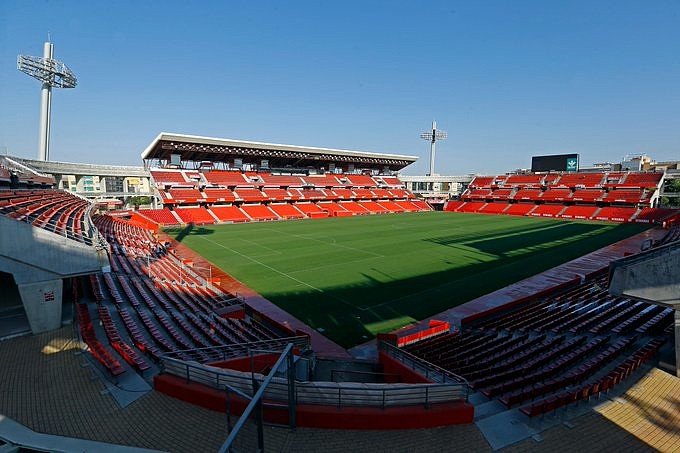 We are just a few minutes away from the starting whistle at the Los Cármenes stadium for the last game of this LaLiga matchday. Granada wants to get out of the relegation positions while Sevilla wants to take advantage of Real Madrid's defeat to get closer to the first place. Will they get the victory? Follow our coverage on VAVEL.
3:43 PM8 months ago

Do not miss a detail of the match Granada - Sevilla with the live updates and commentaries of VAVEL. Follow along with us all the details, commentaries, analysis and lineups for this match.
3:38 PM8 months ago

How to watch Granada - Sevilla Live Stream on TV and Online?

If you want to watch the game Granada - Sevilla live on TV, your options are: ESPN+

Luis Suárez | The Colombian striker has been one of the regular men in this bad start of the season for the red and white team. Suárez has scored two of his club's five goals so far. 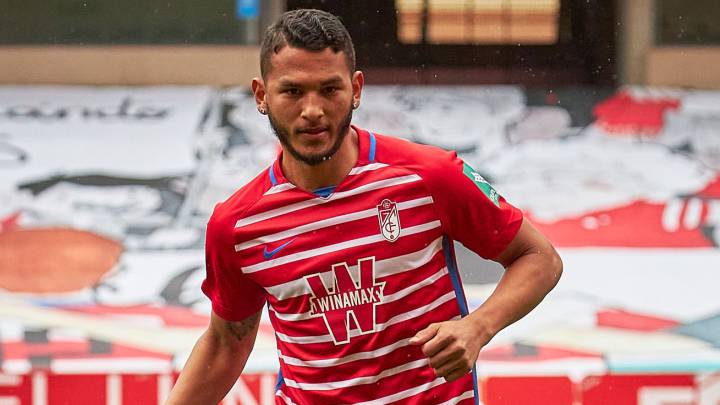 Erik Lamela | This Argentine midfielder arrived to reinforce Sevilla this season and has already scored three goals so far. In the absence of En-Nesyri, Lamela could play a key role in this match. 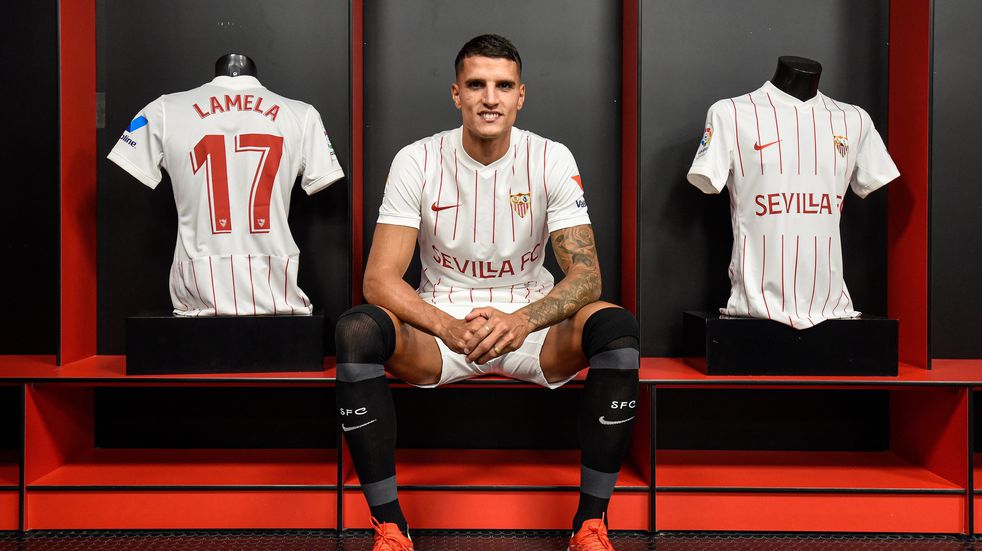 Who will be the referee and his VAR assistant?

The central referee for Granada vs Sevilla will be Javier Arberola Rojas; the VAR assistant will be Antonio Mateu Lahoz.
3:08 PM8 months ago

Seville: Staying at the top

The Sevillian team led by Julen Lopetegui, does not want to move away from the first places. They are currently in third position with 14 points and one game behind Atlético de Madrid and Real Madrid, clubs that are above Sevilla in the overall table. The Palanganas are coming from a draw against Wolfsburg in the Champions League and in LaLiga, they obtained a 2-0 win against Espanyol. 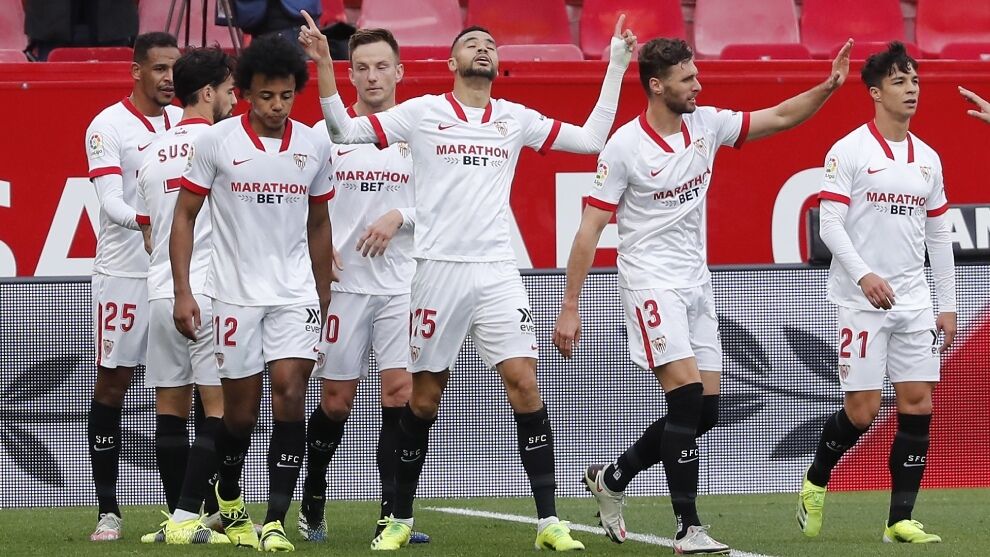 Granada: Getting out of the bottom of the table

The Nazarí team, coached by Robert Moreno, has had a difficult start, as it has not been able to win three points. This balance has led Granada to be in the third last place, right in the relegation positions, with only two points, the result of two draws (against Valencia and Barcelona) and six defeats, the most recent one against Celta de Vigo by a score of 1-0. 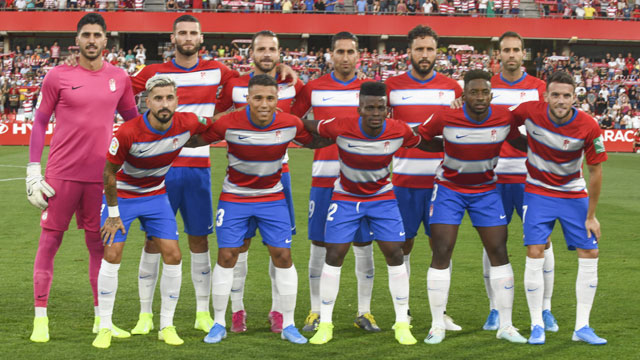 This Sunday afternoon, matchday 8 will end with a game in the south of Spain where Granada will be looking to take advantage of their home to get out of the relegation zone of the general table of the Spanish league, while Sevilla does not want to drop points as they are only three points behind leaders Real Madrid.
2:53 PM8 months ago

The match will be played at the Stadium Los Cármenes

The Granada vs Sevilla match will be played at the Nemesio Los Cármenes, in Granada, Spain. The kick-off is scheduled at 4 pm ET.
2:48 PM8 months ago