CAN0
END3 hours ago

Thank you here for listening to another LaLiga match here on VAVEL. Have a good afternoon and see you next time!
11:13 AM2 months ago

With goals from De Tomás and Aleix Vidal, Espanyol beats Real Madrid 2-1, with Benzema scoring the only goal of the game, and takes the three points home!
Standings provided by SofaScore LiveScore
11:09 AM2 months ago

With goals from De Tomás and Aleix Vidal, Espanyol beats Real Madrid 2-1, with Benzema scoring the only goal of the game, and takes the three points home!
10:58 AM2 months ago

In the beautiful exchange of passes Benzema received in the middle from Rodrygo and arranged for Hazard, who hit the ball high into the net, but Benzema was offside.
10:55 AM2 months ago

Double substitution in Espanyol: Oscar Gil and Darder left for Didac and David López.
10:46 AM2 months ago

Substitution in Real Madrid: Vini Jr is out and Hazard is in.
10:45 AM2 months ago

Benzema received the ball on the left, charged and hit it hard into the goal, with no chance for Diego López, reducing the score!
10:40 AM2 months ago

Benzema received in front, dominated, spun over the marking and hit the goal, but at the moment of the pass to him in the area, in the table before the goal, there was an offside to Jovic, with the goal being disallowed.
10:38 AM2 months ago

Darder received the pass in front on a counter-attack, came out in front of Courtois and hit the left side of the goal, out! And we have substitutions at Espanyol: Aleix Vidal and Embarba are out for Wu Lei and Nico Melamed.
10:35 AM2 months ago

Receiving the pass in front, taking out the defender and beating Courtois' right corner, Aleix Vidal increased the score! And for Real, Modric and Kroos were out, Jovic and Casemiro were in!
10:31 AM2 months ago

In a corner from the left Militão rose alone and headed out, to the left side of the goal!
10:19 AM2 months ago

De Tomas has made his first touch on the ball and it rolls into the second half of the match!
10:19 AM2 months ago

The teams appear on the field to start the second half!

With a goal by Raul de Tómas, Espanyol goes 1-0 ahead against Real Madrid!
9:58 AM2 months ago

De Tómas tried his shot from outside the area and sent it past the left side of the goal.
9:45 AM2 months ago

Yellow for Camavinga, for a push on Bare in the midfield.
9:34 AM2 months ago

Raul de Tómas received the ball after an exchange of passes coming from the midfield, on a cross from Embarba from the right, to finish high and open the score!
9:28 AM2 months ago

Embarba is yellow carded for stepping on Camavinga's foot in the midfield.
9:26 AM2 months ago

Embarba hit it hard from outside the area and Courtois saved Real Madrid!
9:21 AM2 months ago

Vini Jr got the ball in the middle after the Espanyol defense made a mistake. He played a backhanded pass to Benzema, who hit a low shot across the middle of the goal into the hands of Diego López.
9:17 AM2 months ago

Benzema takes the first touch on the ball and it rolls into the first half of Espanyol and Real Madrid in La Liga!
9:03 AM2 months ago

The players take to the field to start the match!
8:50 AM2 months ago

Later in the day we have three games to close the eighth round: Villarreal vs. Betis, Getafe vs. Real Sociedad and Granada vs Sevilla.
8:50 AM2 months ago

So far Elche is beating Celta de Vigo 1-0 and the match you are following is isolated at this time.

Also yesterday, Cadiz drew 0-0 with Valencia and Atleti beat Barcelona 2-0.
8:47 AM2 months ago

The eighth round of La Liga started on Friday with Athletich Bilbao's 1-0 win over Alavés. Also by 1-0 were Osasuna and Mallorca's victories over Rayo Vallecano and Levante respectively.

The players take to the field for a warm-up session.

Real Madrid is line up for the match and will play with: 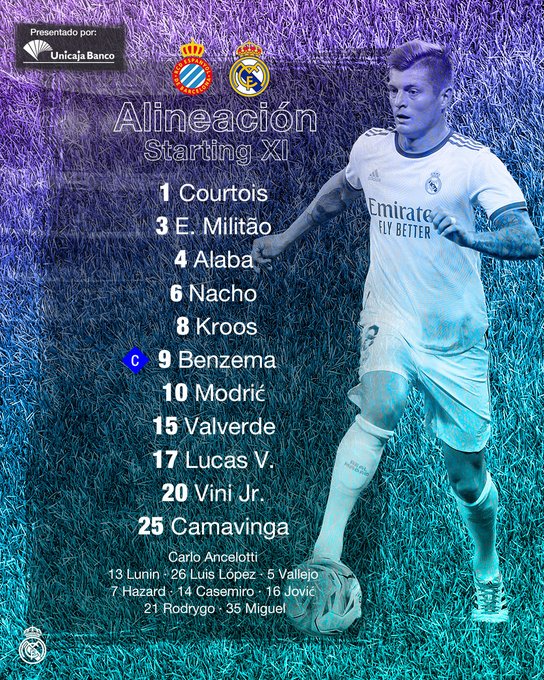 Espanyol is line up for the match and will play with: 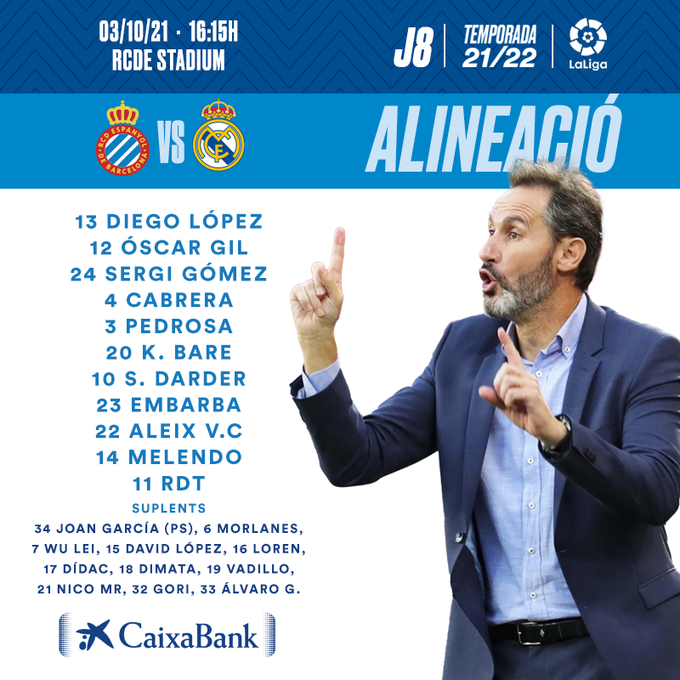 Now the broadcast of the La Liga match between Espanyol and Real Madrid begins!

Do not miss a detail of the match with the live updates and commentaries of VAVEL. Follow along with us all the details, commentaries, analysis and lineups for this Espanyol vs Real Madrid match.
8:27 AM2 months ago

If you want to watch the game ESpanyol vs Real Madrid live on TV, your options is: none.

What time is Espanyol vs Real Madrid match for LaLiga?

This is the start time of the game Espanyol vs Real Madrid of 3rds October 2021 in several countries:

The referee at the Cornellà Stadium will be Guillermo Cuadra.
8:12 AM2 months ago 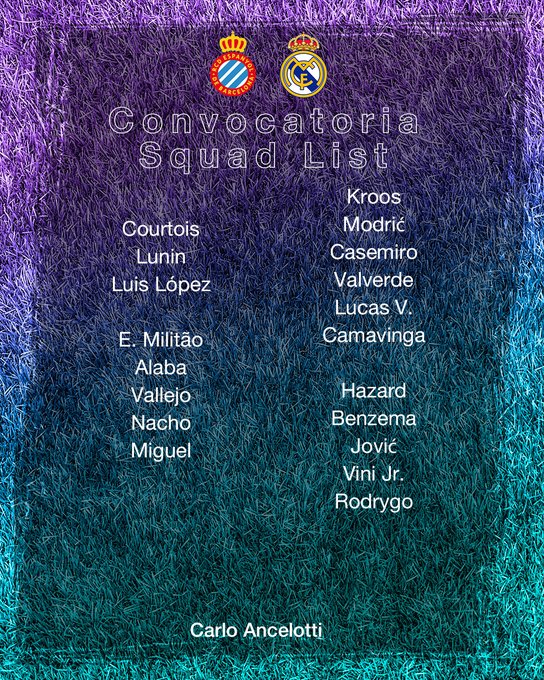 Espanyol will not be able to use the injured Puado, Calero, Herrera and Miguelon, Olazabal and Llambrich. Real is without Ceballos, Bale, Marcelo, Mendy and Carvajal, all injured, while Asensio, Isco and Mariano are out due to options.
7:57 AM2 months ago

With 17 points Real Madrid leads La Liga, tied with Atleti who are just behind and one point ahead of Real Sociedad, who are in third position. Espanyol, meanwhile, are in 15th place with six points, tied with Elche who are behind and one point behind Celta and Cadiz.
Standings provided by SofaScore LiveScore
7:52 AM2 months ago

Meanwhile Real Madrid comes from a loss and a draw in the last two games. For La Liga came the draw, without goals, against Villarreal, on Saturday (25). And for the Champions League, the defeat, this time on Tuesday (28), by 2-1, at home and against Sheriff, from Moldova. On Tuesday night Yakhshiboev opened the scoring, Benzema equalized and Thill scored his and Sheriff's victory.
7:47 AM2 months ago

Espanyol comes into the match after a loss and a win in their last two matches. On Saturday (25), the defeat was to Sevilla, 2-0, with goals from Em-Nesyri and Rafa Mir. The victory was on Wednesday (22), against Alavés, at home. The only goal was scored by Raúl de Tomás. Both matches were for La Liga.
7:42 AM2 months ago