Thank you for following the UEFA Nations League semi-final match between Belgium and France.
3:37 PM4 months ago

Between two of the world's top nations, France came from behind to beat Belgium 3-2 in the Nations League semifinal.
3:32 PM4 months ago

Theo Hernandez with a pile driver of a goal ⚽

Dubois was substituted in and Pavard came off for France.

Batshuayi came on and Castagne came off for Belgium.

Hernandez with a fierce shot from outside the box to go ahead and seal the 3-2 win.

Goal disallowed for offside by Lukaku.
2:57 PM4 months ago

Lukaku's shot to the far post to send the ball into the net 3-2.

Mbappé with the shot inside the box that goes just past the post.
2:47 PM4 months ago

Griezmann's shot from mid-range goes just over, but France continue to dominate.
2:42 PM4 months ago

Now it was Lukaku's turn to fire a shot that went over the top, although it was offside.
2:37 PM4 months ago

Courtois flies into the air and saves his goal in a flurry of French shots in search of the third goal of the night.
2:32 PM4 months ago

Tchouameni came on and Rabiot came off, France changed.
2:27 PM4 months ago

In came Trossard and out came Hazard, Belgium's change.
2:17 PM4 months ago

De Bruyne's bomb and a great save by Lloris.
2:12 PM4 months ago

Mbappé's penalty shot into the corner to tie the game 2-2.

The referee reviews the play on Griezmann and has awarded a penalty.
1:52 PM4 months ago

Benzema's pass was filtered through but he couldn't find a way past Courtois.
1:47 PM4 months ago

Benzema almost falls over and takes an angled shot to make it 2-1.

Mbappé's cross that Griezmann only had to push in, but the striker pushes it wide.
1:37 PM4 months ago

Lukaku's volleyed shot came off his head and was saved by Lloris.
1:32 PM4 months ago

Pogba's shot from half distance goes wide of the goal.
1:27 PM4 months ago

The second half begins between Belgium and France.
1:22 PM4 months ago

Hazard's long-range shot is saved by Lloris.
1:12 PM4 months ago

Without much of a shooting angle, Lukaku put it beyond the goalkeeper's reach and, thus, Belgium increases the difference.

Carrasco breaks free from the left flank and shoots a shot that deflects off a defensive deflection to make it 1-0 and leave the goalkeeper static.

Hazard falls inside the area, but the referee signals that there is nothing.
12:47 PM4 months ago

Mbappé's first-time shot with the inside of his head is saved by Courtois.
12:42 PM4 months ago

Benzema with the shot that covers the defender, but it was offside.
12:37 PM4 months ago

De Bruyne's shot is deflected for a corner kick.
12:32 PM4 months ago

Pavard stepped up to get a shot that was saved by Courtois without much trouble.
12:27 PM4 months ago

Mbappé got past the goalkeeper, but the cross to the near post fell just short and the defense denied him.
12:22 PM4 months ago

Lloris saved his goal with a saving hand when De Bruyne had the first.
12:17 PM4 months ago

French triangulation inside the box, although Mbappé's cross went the wrong way.
12:12 PM4 months ago

The match between Belgium and France kicks off.
12:07 PM4 months ago

The hymns are sung

The French anthem was sung and now the Belgian anthem is being sung at the Juventus Stadium in Turin.
12:02 PM4 months ago

We are minutes away from the start of the game between Belgium and France, in the UEFA Nations League semifinal.
11:57 AM4 months ago

The passage of France

Unbeaten and with only a draw against Portugal, the reigning world champions, France, qualified for the semifinals. 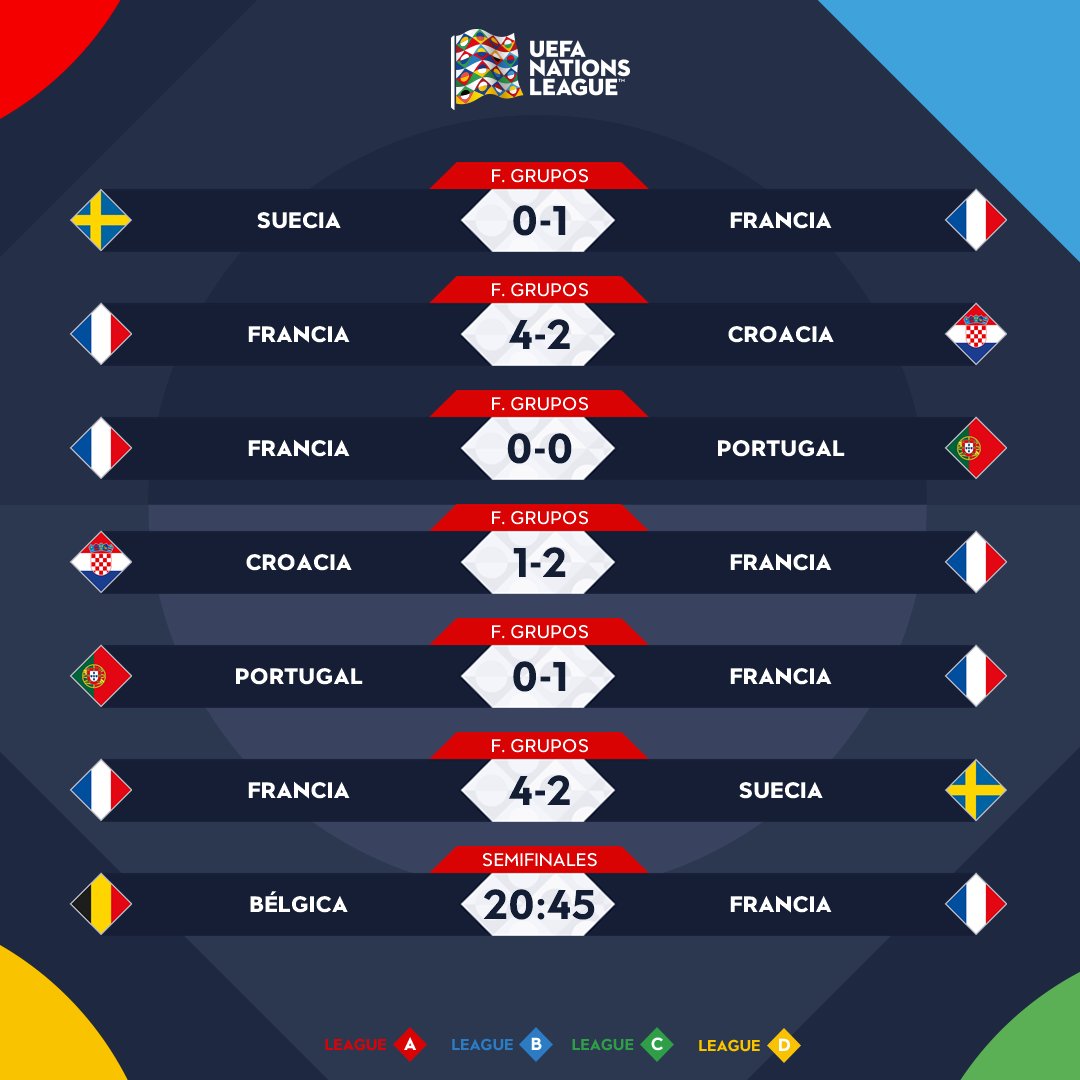 The passage of Belgium

With five wins in the group stage and only one defeat at home to England, Belgium qualified for the UEFA Nations League semifinals. 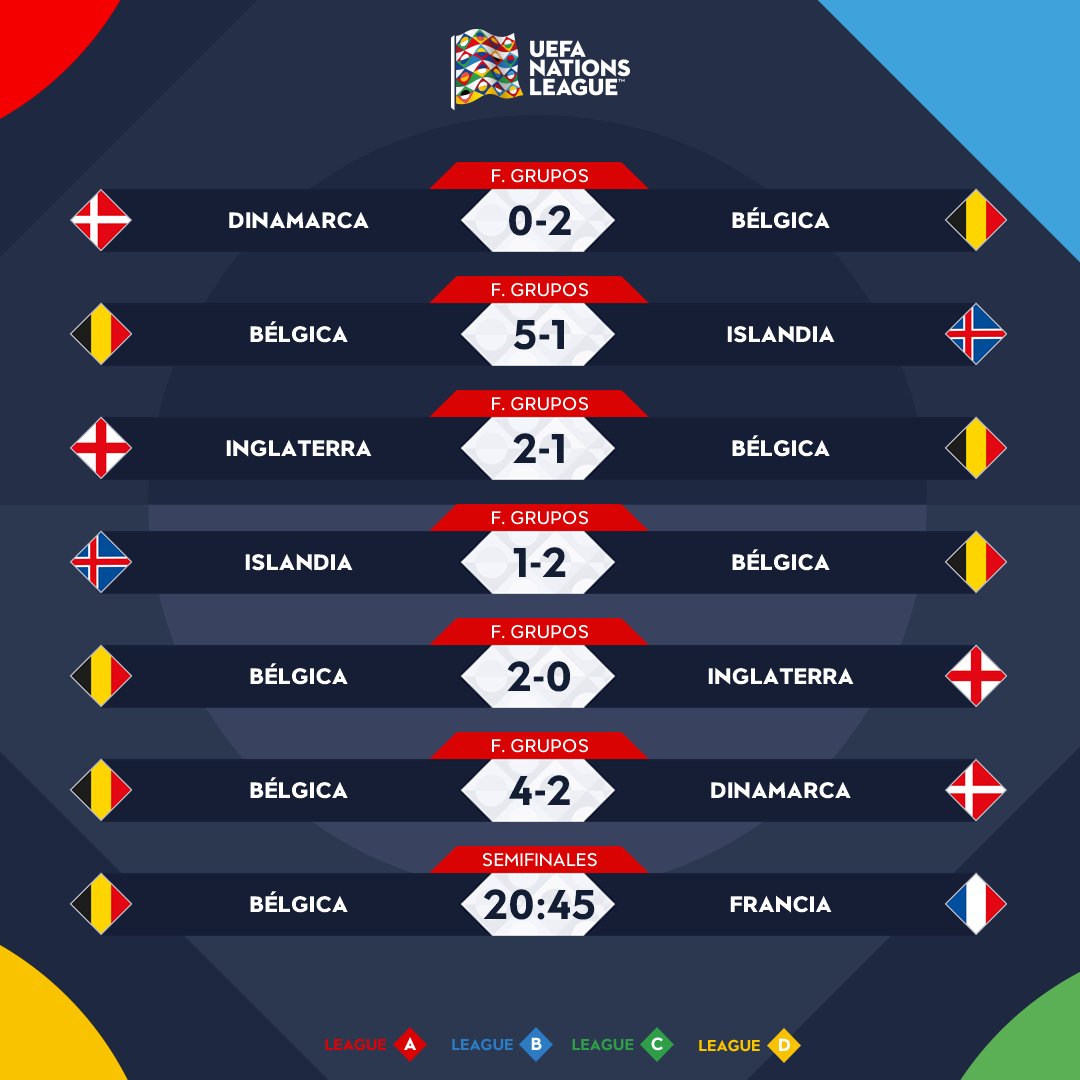 Both Belgium and France are already at the Juventus Stadium warming up for the second UEFA Nations League semi-final.

Think about the present

Roberto Martinez told the Goal website that he does not think or pay attention to rumors linking him to the Barcelona bench, stating that he is happy with Belgium at the moment:

"Being totally honest, I don't spend a lot of time thinking about my future. My career is the example that I don't make plans to be where I am now, I just go from project to project. It's something you learn, to be committed to the day to day. In soccer, if you start thinking, your performance drops and you achieve things below what you can achieve. In my case, I'm very happy with what I'm doing and I'm just trying to get the next steps to take. In the end, if I have to make a decision where I have to take a door, I will try to make the best decision for everyone," he said.

France coach Deschamps told a press conference yesterday that his team will approach this game with seriousness and responsibility because they will be facing one of the best European teams at the moment.

"We will give everything to beat Belgium and we will see who will be our opponent (in a hypothetical final). We are really looking forward to this game and we know that we are up against one of the best opponents in Europe. It will be a high-level match," he said.

This is how one of the dressing rooms of the Juventus Stadium looks like, where the French national team is already preparing for the semifinal game, highlighting that they will be wearing their away uniform with white shirts and blue shorts. 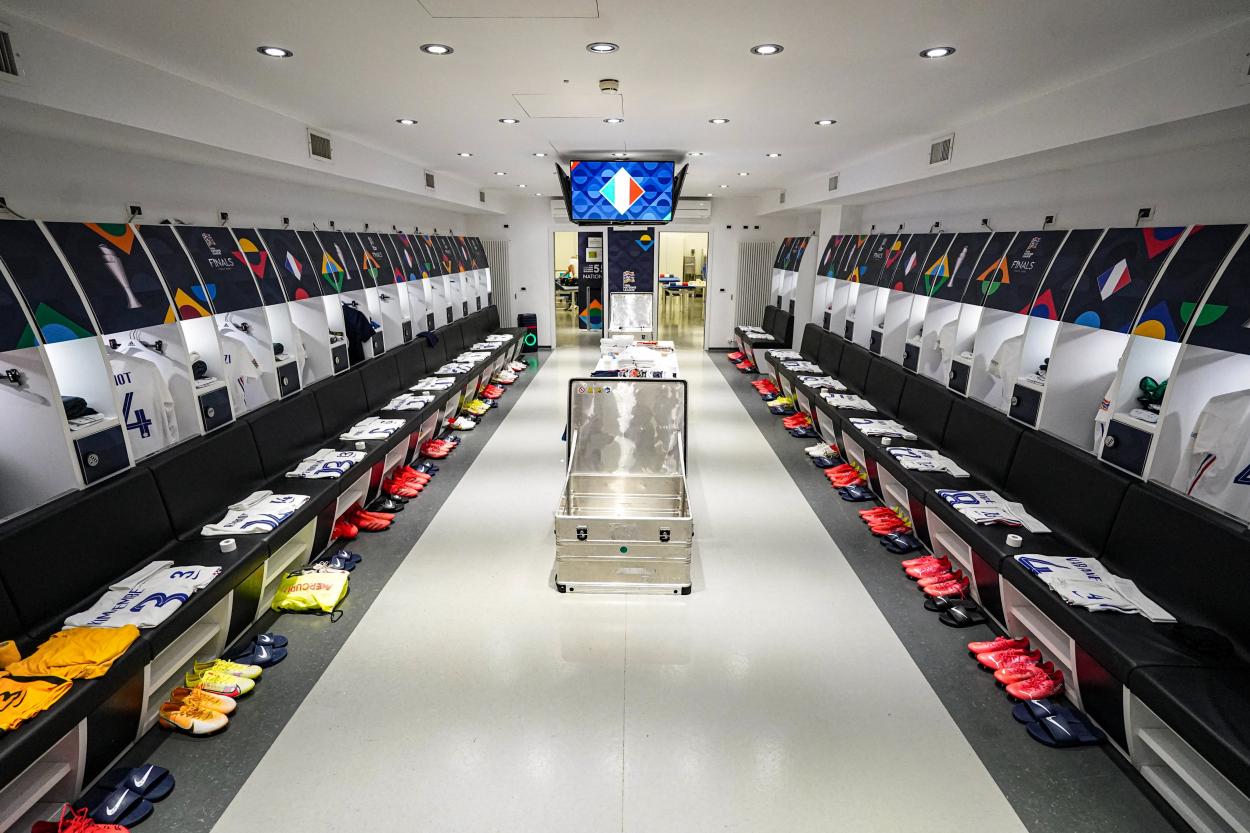 Spain defeated Italy 2-1 yesterday and will be playing the final against the winner between Belgium and France. It should be noted that the loser will not leave yet because it will have to face the clash for third place against the Azzurri.
11:02 AM4 months ago

This Thursday will define next Sunday's UEFA Nations League final with a highly attractive match when Lukaku's Belgium takes on Mbappé's Franca. We begin our coverage of the game.
10:57 AM4 months ago

Do not miss a detail of the match with the live updates and commentaries of VAVEL. Follow along with us all the details, commentaries, analysis and lineups for this Belgium vs France match for the UEFA Nations League.
10:52 AM4 months ago

What time is Belgium vs France match for UEFA Nations League?

This is the start time of the game Belgium vs France of 7th October in several countries:

They have not met on many occasions, but in the last five games the French team has the advantage with a record of two wins, two draws and one loss.

He has improved his performance since his transfer to Atletico Madrid, highlighting that every time he wears the national team jersey Antoine Griezmann improves his level of play and could be the lethal weapon should the game get tight. 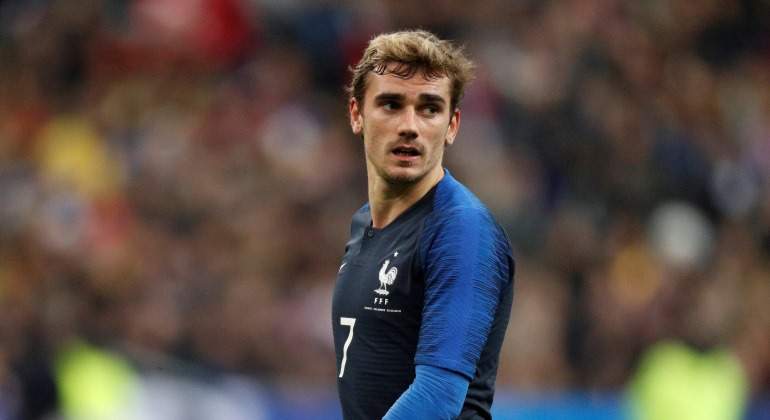 He has only played four games for Belgium this year and has scored five goals, so Romelu Lukaku is a guaranteed goal scorer, especially after his explosive start in his comeback with Chelsea. 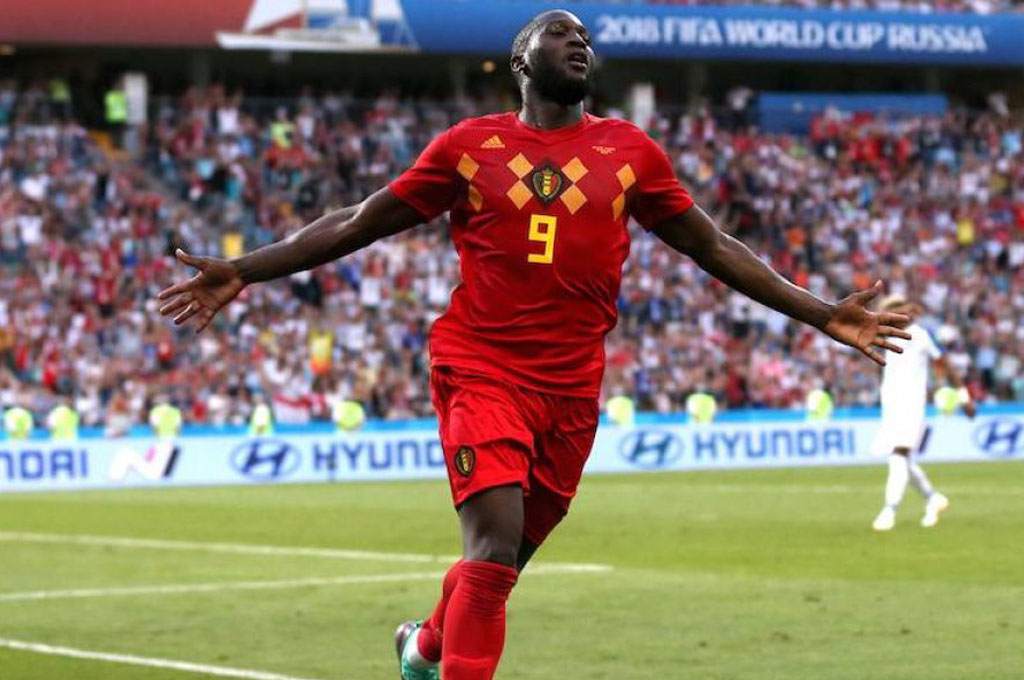 France, the reigning world champions, have failed to win in their most recent five official games and are looking to shake that streak, above all, to gain confidence in something they have lost in recent months and which has been reflected on the pitch.
10:17 AM4 months ago

With seven wins in the last eight games, Belgium wants to gain revenge against the French national team and show that in important games they can give a significant blow of authority, something they have not been able to do in the most recent international tournaments.
10:12 AM4 months ago

Regarding the confidence that the striker Romelu Lukaku generates to the technical director Roberto Martinez, this was limited to say:

'It's like asking a father if his son is the best pupil in the class. We are biased. We like Romelu Lukaku in good times and bad (...). You are asking the wrong person, I will always give a positive answer,", he said.

After the European Championship, play-offs and coronavirus, the final phase of the UEFA Nations League resumes with the four best teams that advanced to the top of their respective groups and the second round will be the clash between Belgium and France.
10:02 AM4 months ago

The Belgium vs France match will be played at the Juventus Stadium, in Turin, Italy. The kick-off is scheduled at 2:45 pm ET.
9:57 AM4 months ago

Welcome to VAVEL.com’s LIVE coverage of the UEFA Nations League: Belgium vs France!