We hope you enjoyed the Atlas vs Necaxa matchday 12 of the Liga MX Femenil. Continue to visit the VAVEL website to stay up to date with all the information that comes up throughout the day.
2:02 PM2 months ago

The red-and-black girls won it in the final moments of the match to take the victory at home.

Initially, it was the Necaxa Centellas who took the initiative to go on the attack and try to score the first goal, but poorly executed plays prevented them from doing so.

In the second half, it was the red-and-black team who went all out to attack in search of the winning goal, getting it in the dying moments of the match.

The next match day Atlas will visit the Leonas and Necaxa will host the Rayadas de Monterrey.

Last ten minutes of the match, Atlas and Necaxa still goalless at the Jalisco.
1:39 PM2 months ago

A shot that whizzes over the crossbar for the home side.
1:27 PM2 months ago

The sparklers come close! Necaxa again comes close to scoring but the home defense neutralizes the danger.
1:13 PM2 months ago

Necaxa lost! The Centellas had a chance to open the scoring after leaving the goalkeeper beaten but the counter shot went over the goal.
1:11 PM2 months ago

Free kick for Atlas! The red-and-black could open the scoring
1:06 PM2 months ago

The second half begins at the Jalisco, Atlas and Necaxa are tied 0-0 at the moment.
12:50 PM2 months ago

First half ends between Atlas and Necaxa, so far goalless draw at the Jalisco
12:41 PM2 months ago

Red-and-black bombardment! Atlas had three consecutive shots on goal, but the ball failed to find its way into the Centellas' net.
12:37 PM2 months ago

With ten minutes left in the first half, it is Necaxa who has had the clearest chances but has not been able to score in a good way.
12:34 PM2 months ago

Match stopped! Alison Gonzalez is lying on the turf after a heavy collision.
12:31 PM2 months ago

Atlas comes close! A shot that crashes into the defense and goes for a corner kick.
12:24 PM2 months ago

Necaxa's shot on goal! They hit it from outside the box but the academy's goalkeeper is still in great shape.
12:17 PM2 months ago

First arrival of the red and black! Atlas went all out on the attack and came close to scoring the first goal of the match.
12:10 PM2 months ago

A shot by the Centellas in search of danger but the shot goes weakly into the hands of Ana Gaby Paz.
12:01 PM2 months ago

The game kicks off from the Jalisco Stadium
11:52 AM2 months ago

In a few moments we start

In a couple of minutes we will start with the match: Atlas Femenil vs Necaxa Femenil, corresponding to the 12th round of the Torneo Grita México A21 Liga BBVAMX Femenil.
11:47 AM2 months ago

This is how the Necaxa Centellas arrived at the Jalisco Stadium.

The special jersey for this meeting

With this beautiful special jersey commemorating the fight against breast cancer, the red-and-black team will be dressed in pink and will try to debut with a victory. 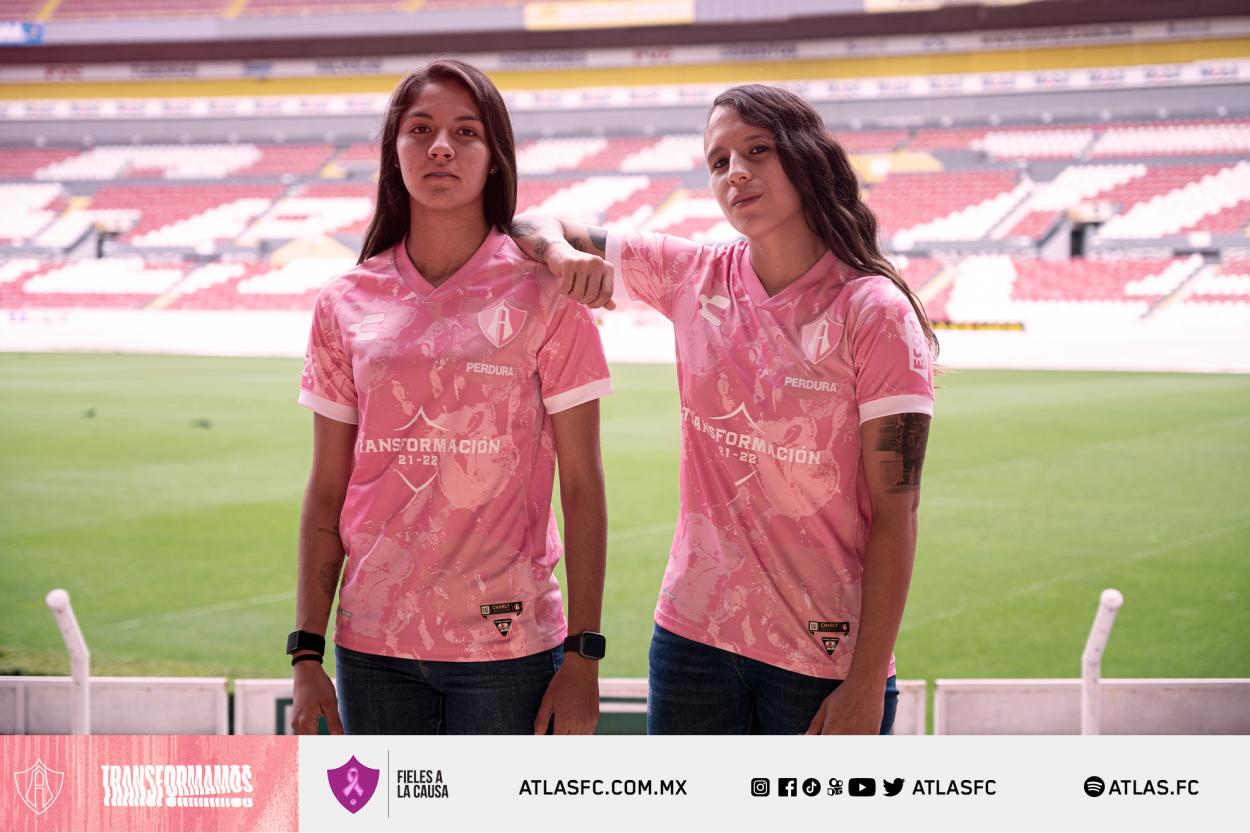 Atlas in its last five matches

The academy has had a regular performance in its last five matches, recording 2 defeats, 1 draw and 2 wins; however, it is worth noting that the team has improved after beating Cruz Azul and Tijuana in the previous two matchdays.

They are also averaging a total of 2.5 goals per game, so the joy of scoring could come today at the Jalisco.

The lineup of the Centellas is ready!

For the surprise! The Centellas need points to get into the final phase.

Necaxa Femenil will take on Atlas Femenil at the not-so-easy Estadio Jalisco. will be in fine form as they travel to Atlas Femenil. 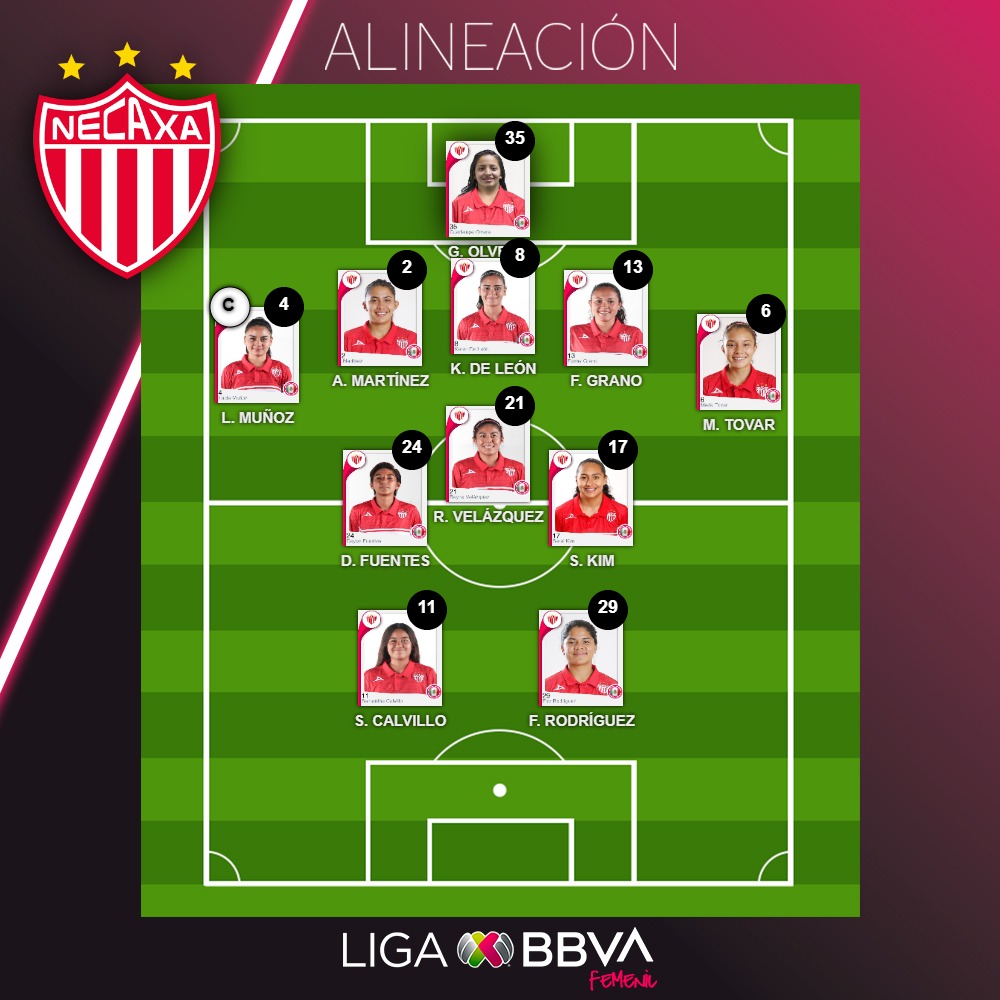 This is how Atlas' red-and-black team will try to get the three points at the Jalisco Stadium. 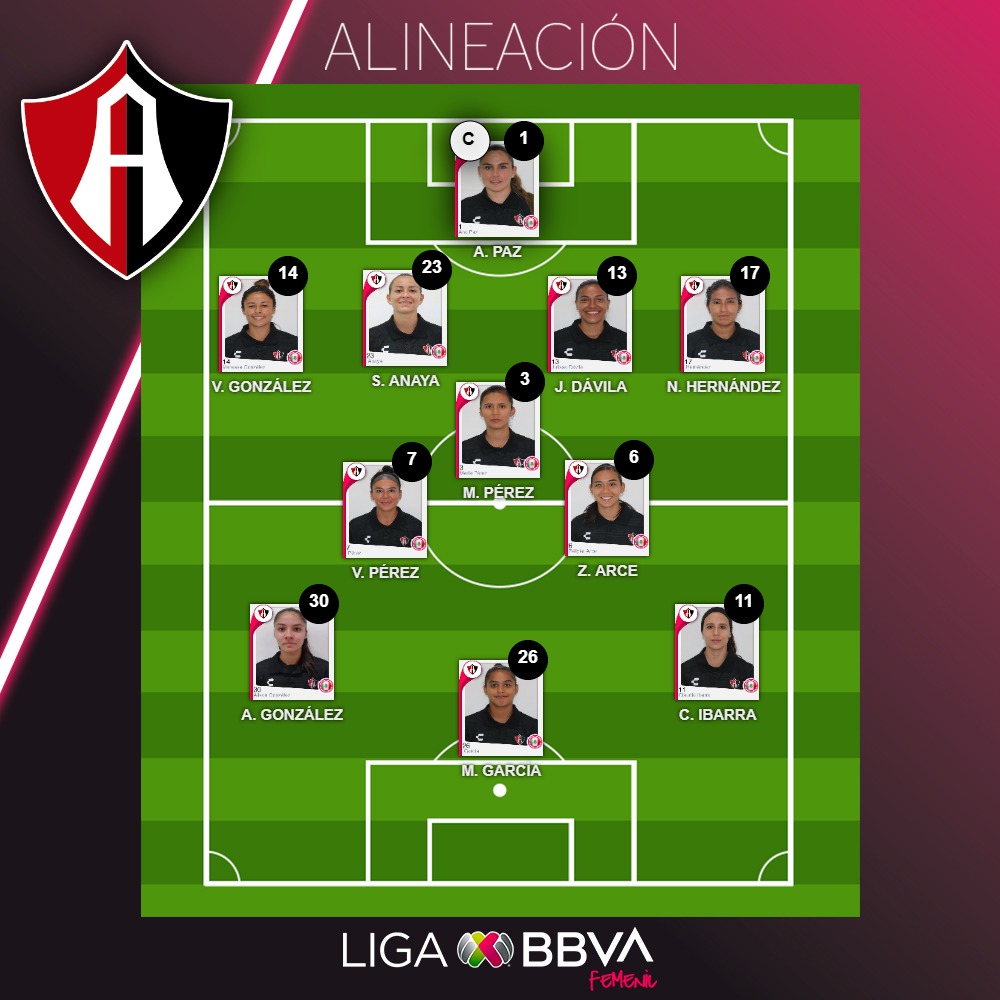 How does the Atlas arrive?

The red-and-black Atlas are in the top positions of the table, occupying the number 6 position, they have obtained 18 points (7 points as home, 11 as visitors), also, they have 16 goals scored against 13 goals conceded.
11:03 AM2 months ago

How is Necaxa Femenil coming along?

The Necaxa Centellas come into this match in tenth place overall, with 14 points so far (9 points at home, 5 points away), however, they suffer a lot defensively as the goals conceded rate far exceeds the goals scored rate (22 goals conceded, 10 goals scored).
11:00 AM2 months ago

The wait is over, the actions of Day 12 of the BBVAMX Women's League continue with the duel between the red-and-black Atlas receiving the Necaxa Centellas at the Jalisco Stadium.

Do not miss a detail of the match with the live updates and commentaries of VAVEL. Follow along with us all the details, commentaries, analysis and lineups for this Atlas vs Necaxa match.
10:32 AM2 months ago

What time is Atlas vs Necaxa match for Liga MX Women?

This is the start time of the game Atlas vs Necaxa of 9th October in several countries:

Necaxista pride and made in the neighborhood, Andrea Alejandra Baderas Sorchini is the representation of commitment to the team and an authentic leader in the defensive wall to such a degree that she has become one of Necaxa's stalwarts and an idol of the fans of the Centellas. She is one of the pillars in the defensive saga and currently has played 92% of the minutes played of which she has appeared in 10 games as a starter out of 11 games played, Alejandra could be the one who becomes the factor of the match and an impossible wall for the red and blacks to pass. 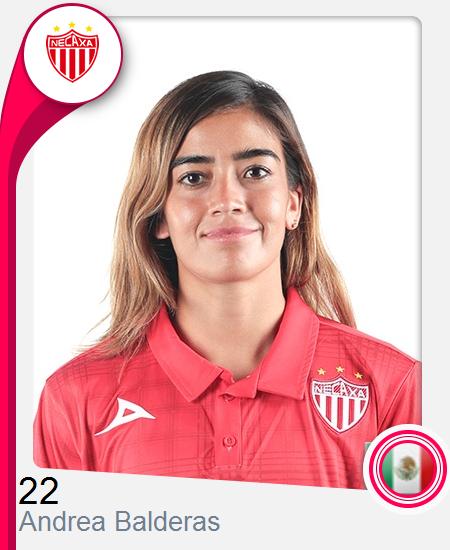 Alison González is synonymous with the definition of a striker, the striker of the red and black team is one of the pillars of the team and one of the most fundamental pieces in attack, since her arrival to the Jalisco squad she has become a real killer in the box, she currently has 57 goals with Atlas and in this tournament she has 6 goals in 5 games played so she could be the weight that tips the balance in favor of the red and blacks and give them another victory so far in the championship. 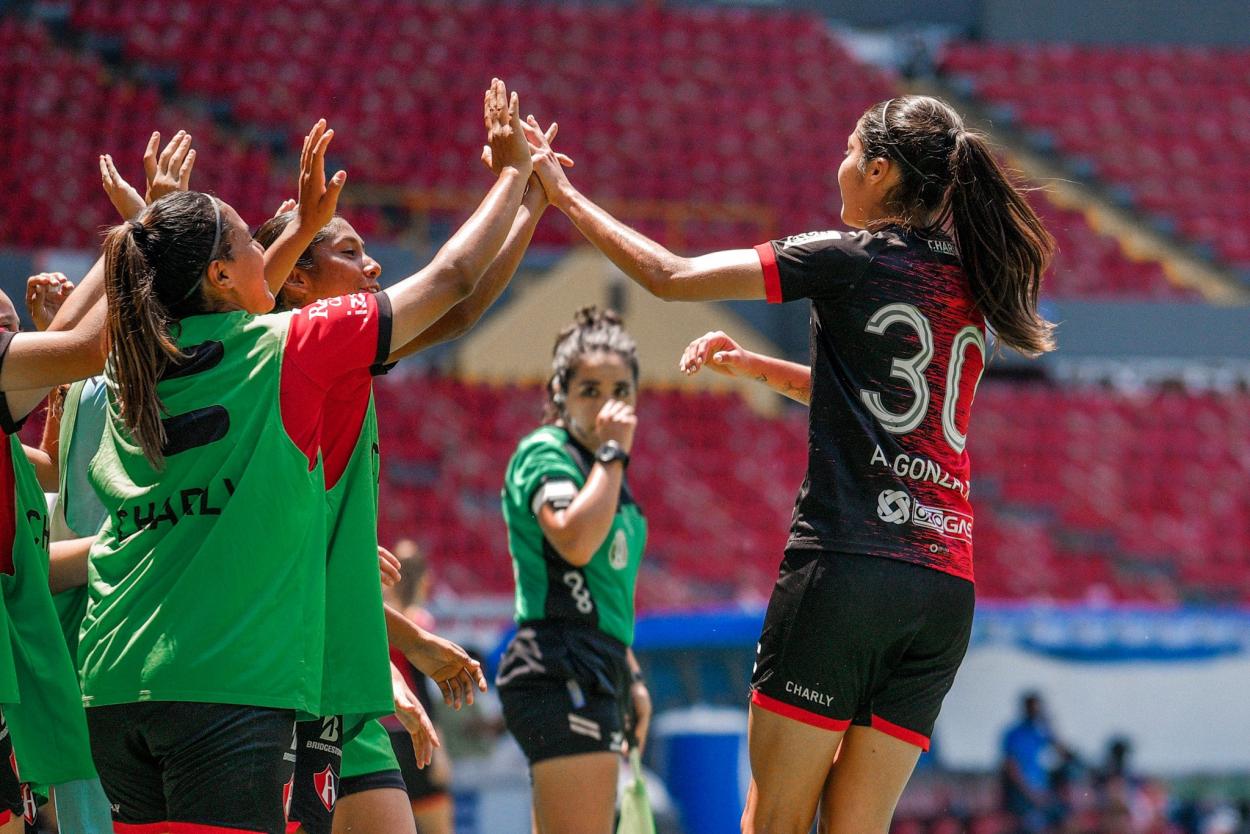 Atlas Femenil and Necaxa Femenil have only met on eight occasions. In those meetings, the scales have clearly tipped in favor of the red-and-black team, with eight convincing victories for the Jalisco-based team. The most recent encounter dates back to matchday 15 of last year's tournament, when the Red-and-Black and the Centellas met in Guadalajara with a 3-1 score in favor of the Red-and-Black. Likewise, in terms of goals scored, it is the members of the academy who have the advantage with 24 goals to the university team's 3.
10:02 AM2 months ago

For this match, Francia María will be the central referee, accompanied by Mayra Alejandra and Damaris Saray as the assistants 1 and 2 respectively, and Orlando Delgadillo will be the fourth referee.
9:57 AM2 months ago

Little by little they are looking to get into the playoffs

After defeating Querétaro Femenil by a score of 2-0, Necaxa is looking to continue climbing up the rankings and place itself in the playoffs to ensure its presence and the opportunity to fight to be crowned as the new champions of Mexican soccer. The team coached by Jesús Palacios has accumulated 14 points, which are the result of 3 wins, 5 draws and 3 defeats, which is why it will be of vital importance to win in Guadalajara. 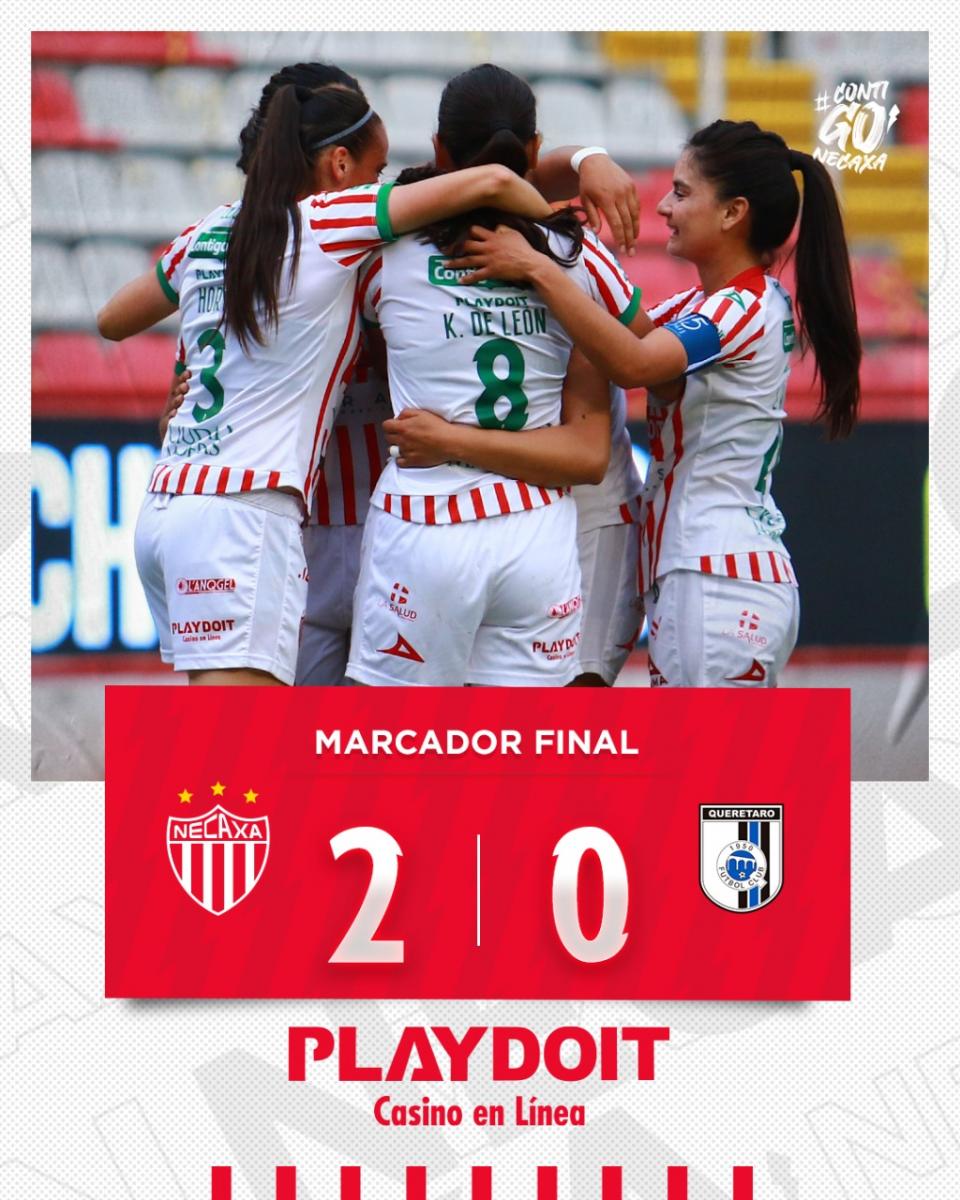 They continue to excite

The squad led by Fernando Samayoa is going through a great moment, being in 6th place in the general table, the red-and-black team has one of the best offensive sagas in the league, scoring 16 goals in the scarce 10 days of the tournament, also, since the Apertura 2018 they have been constantly reaching the final stages of the tournament, however, they still do not get the cherry on the cake, so this year could be different and achieve the goal that they have fought so hard but not achieved. 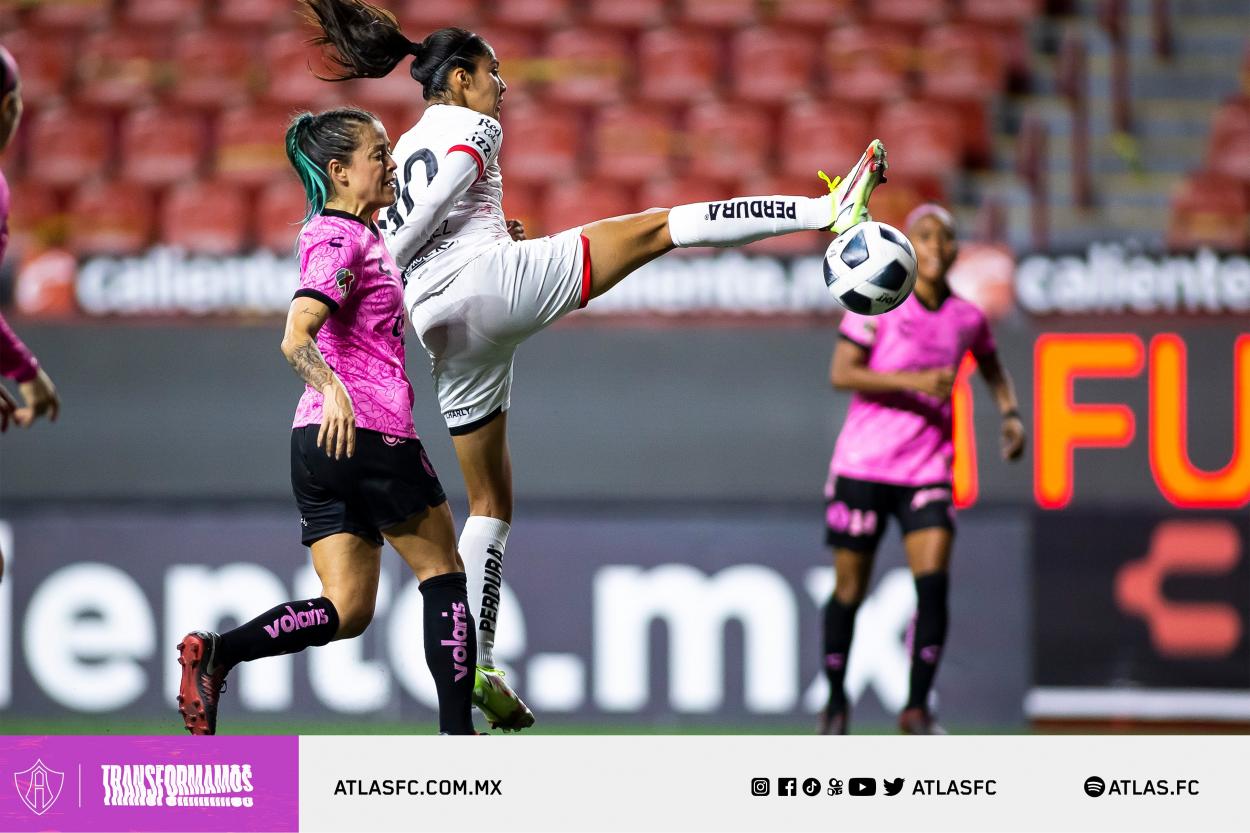 A new matchday will kick off for the red-and-black Atlas and the sparkling Necaxa on Saturday morning at the Jalisco Stadium. Both teams live very similar realities since both are in the top 10 places in the overall standings, 10th (Necaxa) and 6th (Atlas) with four points between them. Likewise, while the academy is going through a great moment offensively, being the third highest scoring team, on the other hand, the scintillating team is going through a great defensive moment, without a doubt this will be one of the most interesting duels in the competition.
9:42 AM2 months ago

The Atlas vs Necaxa match will be played at The Jalisco Stadium, in Guadalajara, Mexico. The kick-off is scheduled at 13:00 pm ET.
9:37 AM2 months ago

Welcome to VAVEL.com’s LIVE coverage of the 2021 Liga MX Women: Atlas vs Necaxa!