Thank you very much for joining us during the broadcast of this match. To keep up to date with the Asian Qualifiers for Qatar 2022, stay tuned to VAVEL.com.
8:06 AM4 days ago

END OF THE GAME ✔

The central referee blows the final whistle and Japan takes an important win against the group's top side
8:05 AM4 days ago

Yellow card for Harry Souttar in Australia
8:04 AM4 days ago

The referee adds four more minutes
8:03 AM4 days ago

Out: Martin Boyle and Fran Karačić.

In: Rhyan Grant and Chris Ikonomidis

ASANO GETS INTO SCORING POSITION, LIFTS IT WITH A LITTLE BALLOON AND IT GOES INTO THE VISITOR'S GOAL, IT WAS AN OWN GOAL BY BEHICH, THE AUSTRALIA DEFENDER.
7:58 AM4 days ago

Out: Hidemasa Morita and Yūto Nagatomo

In: Gaku Shibasaki and Yūta Nakayama

TAKUMA ASANO RECOVERS A LOOSE BALL FROM A REBOUND, SHOOTS RIGHT-FOOTED, AND AUSTRALIA'S GOALKEEPER RYAN SAVES.
7:50 AM4 days ago

ITO HAS THE GOAL FOR JAPAN, HE SHOOTS AND THE GOALKEEPER SAVES, THE REBOUND IS LEFT TO ENDO AND HE ALSO MISSES.

WHAT JAPAN JUST MISSED IS UNBELIEVABLE!

Australia's goal was a huge blow for Japan. The locals could not find a way to react
7:42 AM4 days ago

HRUSTIC TAKES THE FREE KICK WITH HIS RIGHT FOOT AND SCORES A BEAUTIFUL GOAL. WHAT A GOAL!
7:41 AM4 days ago

Hidemasa Morita yellow card for Japan
7:40 AM4 days ago

ATTENTION THAT THE VAR DETERMINES THAT IT IS NOT A PENALTY, IT IS A FREE KICK IN FAVOR OF AUSTRALIA ON THE EDGE OF THE JAPANESE AREA.
7:39 AM4 days ago

Ajdin Hrustic reaches the Japanese penalty area, falls down and the referee blows a penalty for Australia
7:38 AM4 days ago

Yellow card for Aziz Behich in Australia.
7:37 AM4 days ago

Out: Adam Taggart and Aaron Mooy

In: Mitchell Duke and Awer Mabil

Ito's shot for Japan and the ball goes wide, it could have been the home team's second.
7:28 AM4 days ago

MINAMINO CONTROLS THE BALL IN THE AUSTRALIAN BOX, FALLS AND ALL OF JAPAN CALLS FOR A PENALTY, BUT THE REFEREE DOES NOT WHISTLE.
7:27 AM4 days ago

Ao Tanaka sends a powerful header into the Australian goal and is unlucky.
7:24 AM4 days ago

Japan seems to have entered the second half more nervous and Australia is more determined.
7:21 AM4 days ago

Australia looks for it on the right, Irvine passes to Taggart and the attack ends in nothing.
7:20 AM4 days ago

THE SECOND HALF BEGINS🕢

The referee gives the order and the second half is underway in Japan
7:03 AM4 days ago

MINAMINO SHOOTS FROM OUTSIDE AND AUSTRALIAN GOALKEEPER RYAN MAKES A SAVE.
6:58 AM4 days ago

TAGGART GETS INTO SCORING POSITION FOR AUSTRALIA ON THE RIGHT, SHOOTS AND THE BALL HITS THE POST, MOOY CATCHES THE REBOUND AND IT DOESN'T GO IN EITHER. UNBELIEVABLE WAS THE EQUALIZER
6:54 AM4 days ago

Great save by Trent Sainsbury as Osaka tried to get into the Australian penalty area
6:51 AM4 days ago

EXCELLENT STEAL BY ENDO IN THE MIDDLE OF THE FIELD, PLAYS WITH OSAKO AND THE JAPANESE STRIKER MISSES.
6:49 AM4 days ago

Nagatomo wins on the left flank, looks for his teammates and the ball doesn't reach its destination.
6:48 AM4 days ago

Now Japan is in control of the ball. The game entered a moment of calm where the possession of the ball is moving, without much depth.
6:44 AM4 days ago

Yūto Nagatomo makes a great run down the left, crosses to Minamino and is cut off by an Australian defender.
6:43 AM4 days ago

CLEAR CHANCE FOR ITO FOR JAPAN, HE HOOKS AND SHOOTS AND THE BALL GOES WIDE.
6:37 AM4 days ago

High pressure in Japan forcing Australia to split the ball
6:35 AM4 days ago

Right cross for Adam Taggart, the Australian fails to control and misses the chance to equalize.
6:33 AM4 days ago

Long pass from Wataru Endō to Yuya Osako that has no future, cut off by Australia
6:31 AM4 days ago

Japan retreats and waits for Australia, for now the ball belongs to the Oceanians
6:30 AM4 days ago

Ajdin Hrustic tries from the right for Australia, but the Japanese goalkeeper makes a good save.
6:29 AM4 days ago

AO TANAKA RECEIVES, ARRIVES IN THE AUSTRALIAN BOX, SHOOTS AND SCORES THE FIRST GOAL OF THE MATCH FOR JAPAN.
6:27 AM4 days ago

First arrival of Australia with Mooy who plays with Tom Rogić, shoots and is unsuccessful.
6:25 AM4 days ago

Japan attacks on the left with Hidemasa Morita, sends a cross and Australia clears.
6:24 AM4 days ago

The ball is rolling on Japanese soil and Japan vs Australia is already playing
6:16 AM4 days ago

Last game between the two 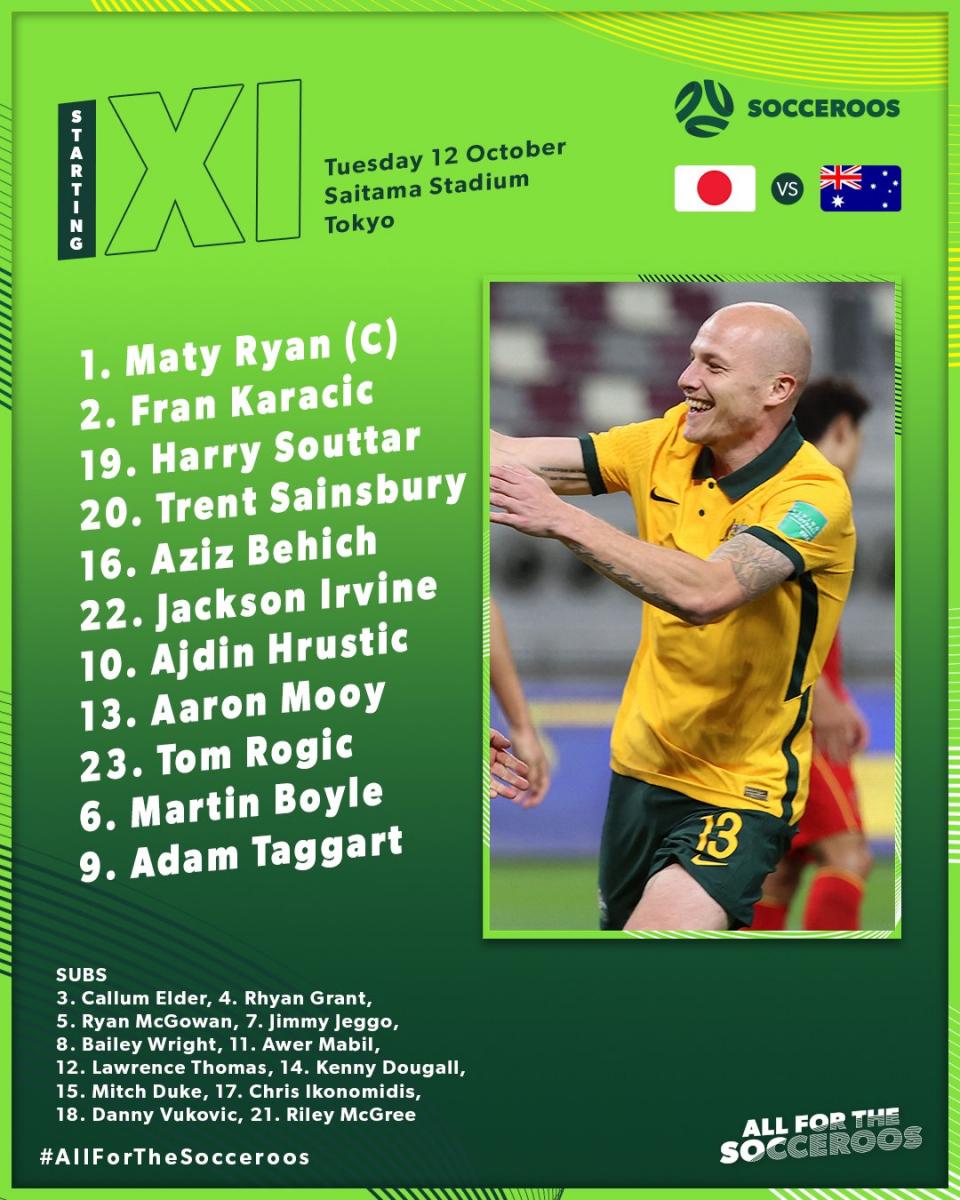 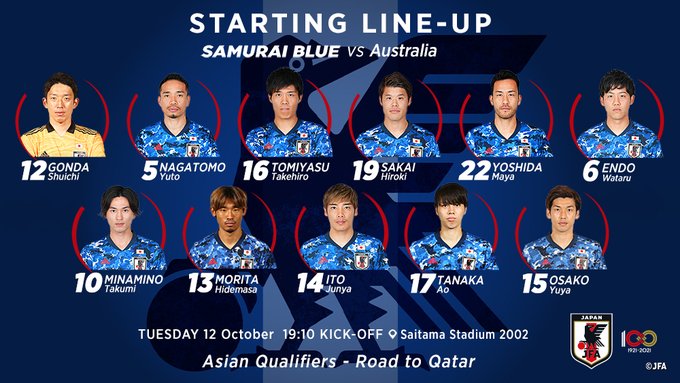 The match between Japan vs Australia, corresponding to the third round of group B in the Asian Qualifiers for Qatar 2022, will kick off in a few minutes. We will have all the information live from Saitama Stadium.
2:04 AM4 days ago

In a few moments we will share with you the starting lineups for Japan vs Australia live, as well as the latest information from the stadium. Follow the action with VAVEL's live online minute-by-minute coverage.
1:59 AM4 days ago

How to watch Japan vs Australia live on TV and online?

If you want to watch the game Japan vs Australia live on TV, your options is: STAR+.

If you want to directly stream it: Star+.

What time is North Japan vs Australia in Asian Qualifiers?

Ajdin Hrustic is a 25-year-old player who stands out for perfectly managing the Australian midfield. Thanks to his filtered passes and his presence in attack, the Oceania team has been able to achieve great results.
1:44 AM4 days ago

Takumi Minamino is Japan's most valuable player. The 26-year-old right winger has real speed, which would be of vital importance to the Japanese in their quest for victory.
1:39 AM4 days ago

History between the two teams

In total, the two teams played 25 matches, where draws were the constant. Japan won 9 of them, Australia won 7 and they tied ten times.
1:34 AM4 days ago

Australia and its great moment

Australia is on a great run in the Asian qualifiers. The Oceanians have won all their matches and have nine points out of a possible nine. To dream of qualifying for the World Cup, the Australians will have to beat Japan.
1:29 AM4 days ago

Japan, with the need for everything

Japan comes into this match in third place with three points. For the Japanese team it is of vital importance to beat Australia, as the Asian team is six points behind its rival and needs to close the gap.
1:24 AM4 days ago

The match will be played at the Saitama Stadium

Saitama Stadium is one of the most important sports venues in Japan. Built on October 13, 2001, this stadium was part of the venues where the 2002 World Cup was played. It has a maximum capacity of 63,700 spectators. 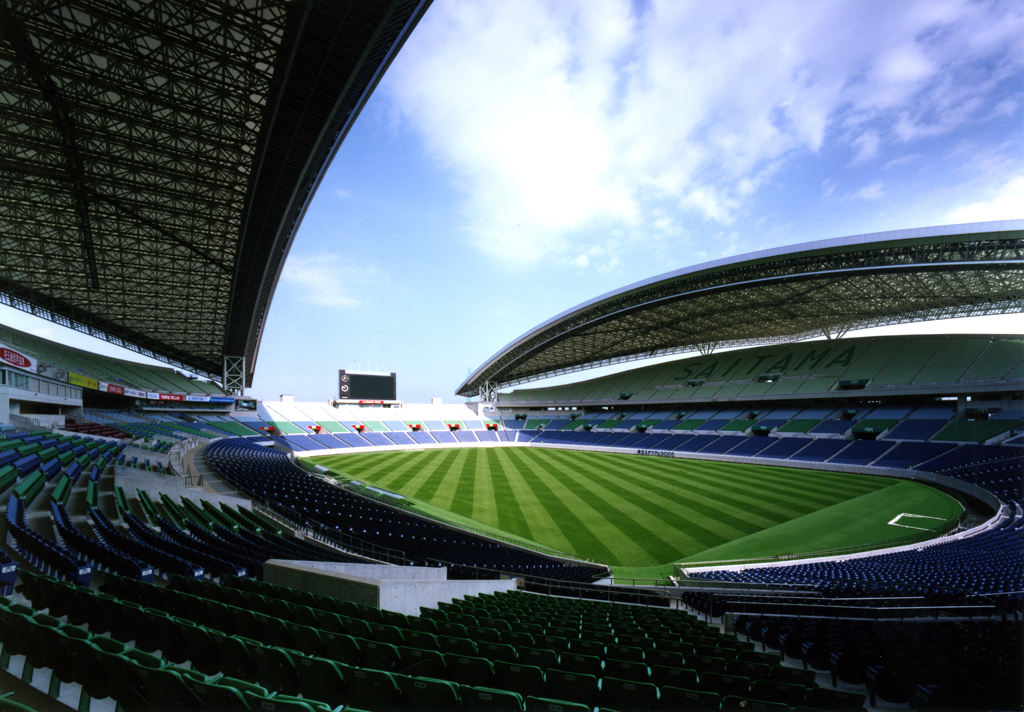 My name is Esteban Monsalve and I will be your host for this match. We will provide you with a pre-match analysis of the Japan vs Australia Oceania Qualifying match, score updates and live news here on VAVEL.com.

Maryland Bobcats FC vs Chicago House AC preview: How to watch, kick-off time, predicted lineups, and ones to watch 8 hours ago
//